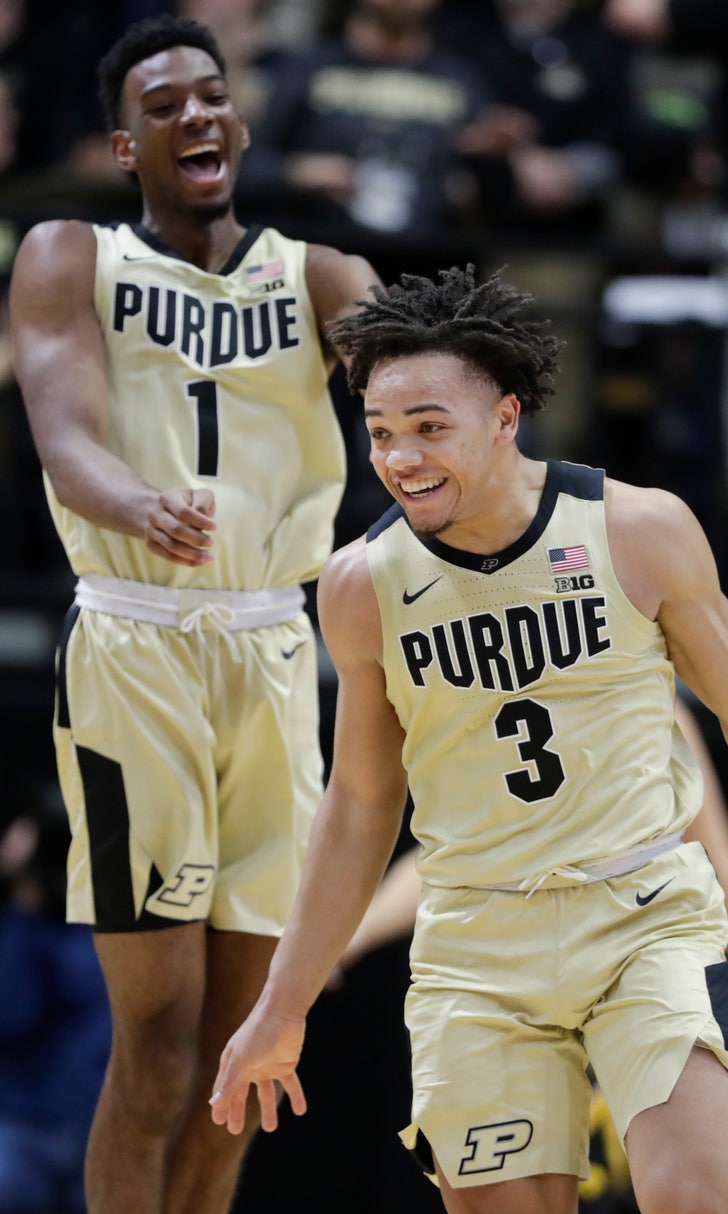 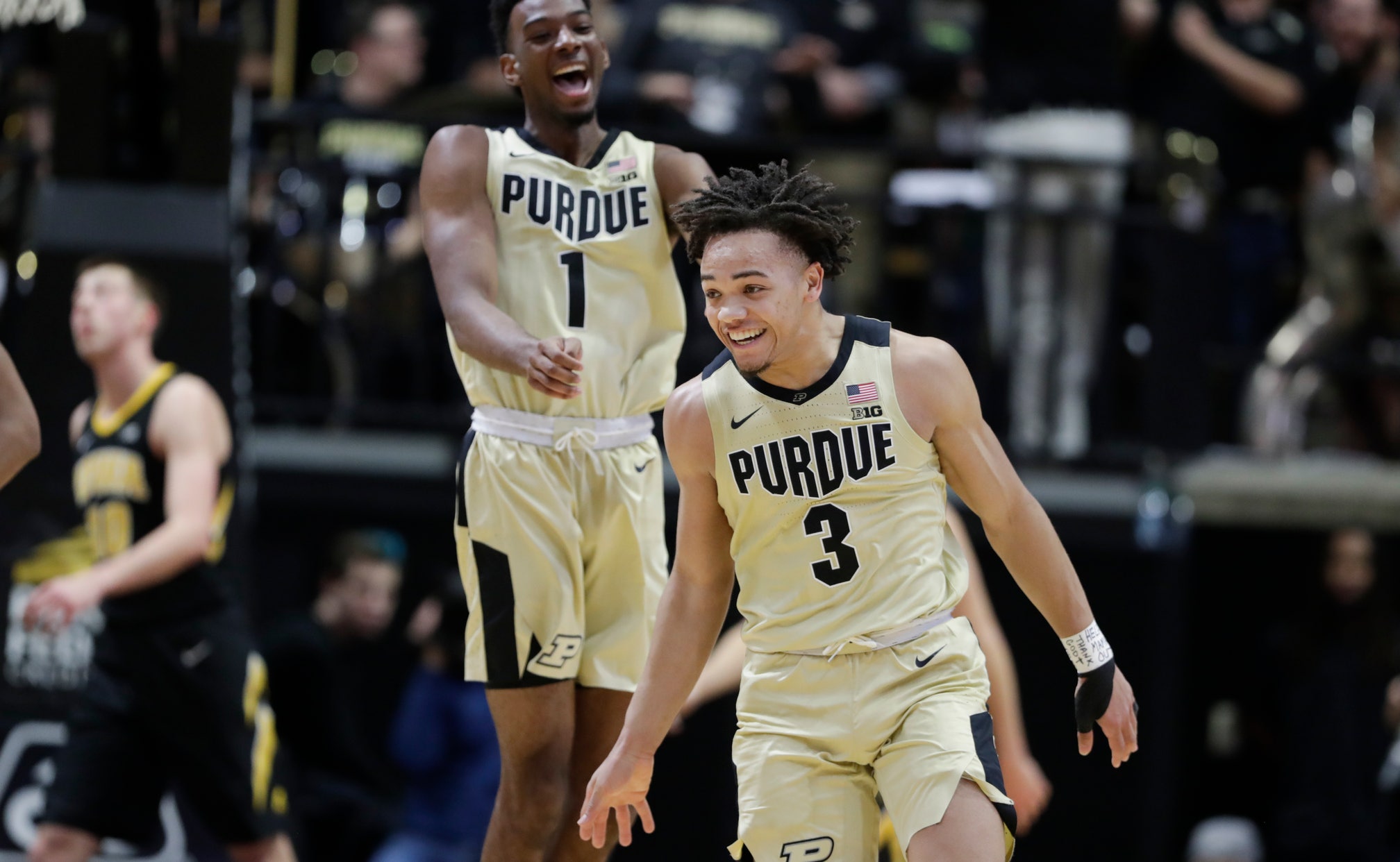 WEST LAFAYETTE, Ind. (AP) — There's no place like home for the Purdue Boilermakers.

Carsen Edwards scored 16 of his 21 points in the first half and Purdue beat 25th-ranked Iowa 86-70 on Thursday night to snap the Hawkeyes' five-game winning streak.

Purdue is winless on the road so far, but everything came together at Mackey Arena once again as the Boilermakers won their seventh straight home game this season and ninth in a row dating back to 2017-18.

Matt Haarms had 14 points and Aaron Wheeler added 10 for the Boilermakers (9-5, 2-1 Big Ten), who have won three straight for the first time since starting the season 4-0.

Purdue refused to settle for low-percentage shots early and instead attacked inside. That game plan produced 42 points in the paint, and the bench led by Haarms contributed 39 points.

"We're not losing much when we sub," Boilermakers coach Matt Painter said. "At times we're getting better. Being able to have an overall consistent defensive effort from your team in back-to-back games and that kind of production from your bench is what you need."

Tyler Cook had 24 points, Isaiah Moss scored 13 and Ryan Kriener finished with 10 for the Hawkeyes (11-3, 0-3), still searching for their first conference victory this season.

Purdue improved to 9-1 in its last 10 home games against Iowa. The Boilermakers hold a 90-76 series advantage, winning 15 of 23 meetings during Painter's tenure.

In last season's lone matchup, the Boilermakers made a Big Ten-record 20 3-pointers to win 87-64. This time, it was all-around efficiency and scoring depth that made the difference.

Purdue shot 53.2 percent and was well above 60 percent until the final minutes. The Boilermakers' bench boosted one of the nation's most potent offenses as the reserves outscored their Hawkeyes counterparts 39-10.

The teams traded the lead early in the first half until Purdue got rolling.

The Boilermakers shot 63.3 percent from the field to take a 52-35 halftime lead.

"At the start we told ourselves, it can't be a scoring contest. One team is going to make the adjustments and we knew we had to be that team," Haarms said. "I think it's about staying aggressive."

Haarms, who came off the bench for a third straight game, shot 4 of 6 from the field and was 6 for 6 at the free throw line. Purdue converted 11 of 12 free throws and spread the ball around with 22 assists.

"We've got talented guys on the bench. Coming in and giving us a good lift isn't really a surprise," Edwards said. "I see the guys put in the work and go hard at practice every day. They compete every day. They're taking advantage of opportunities."

A video tribute to late Purdue student Tyler Trent was played before the game. Trent died Tuesday at age 20 after battling cancer. Players from both teams wore "TylerStrong" shirts during warmups. The shirts were available to fans, with 50 percent of sales to be donated to the Tyler Trent Cancer Research Endowment Fund. "You asked of the impact he had on the Purdue community, and I think it's really the impact he's had on the country," Edwards said. "It's heavy on our hearts."

Iowa: A downward spiral continued for the Hawkeyes, who have dropped from No. 15 to No. 25 in the AP poll since losing to Wisconsin on Nov. 30. Iowa remains without its second-leading scorer, forward Luka Garza, who averages 12.7 points per game. He missed a third straight game with an ankle injury. "We're better with him. We need him. He practiced last night, and he was not ready," McCaffery said. "I'm not going to put him out there if he's not ready to go. So hopefully, he'll be ready for Sunday. If not, we'll just go game by game."

Purdue: The Boilermakers are surging at the right time. Purdue defeated its second straight ranked opponent, including a 62-60 victory over Maryland on Dec. 6, and pushed its home winning streak to nine. Now, the Boilermakers need to play the same way on the road, where they are 0-3 this season to go with 2-2 at neutral sites. Purdue is on the road for three of its next five games.

Iowa: Made six 3s after averaging 10.4 during its five-game winning streak. The Hawkeyes went 0 for 7 from 3-point range in the second half. . Iowa had only four points off turnovers.

Purdue: Edwards surpassed 1,400 career points with a 3 early in the second half. ... The Boilermakers were 9 of 24 from 3-point range. They led for 37:07 and turned the ball over only eight times compared to 14 for Iowa.

Iowa: Hosts No. 24 Nebraska on Sunday.

Purdue: At No. 8 Michigan State on Tuesday.