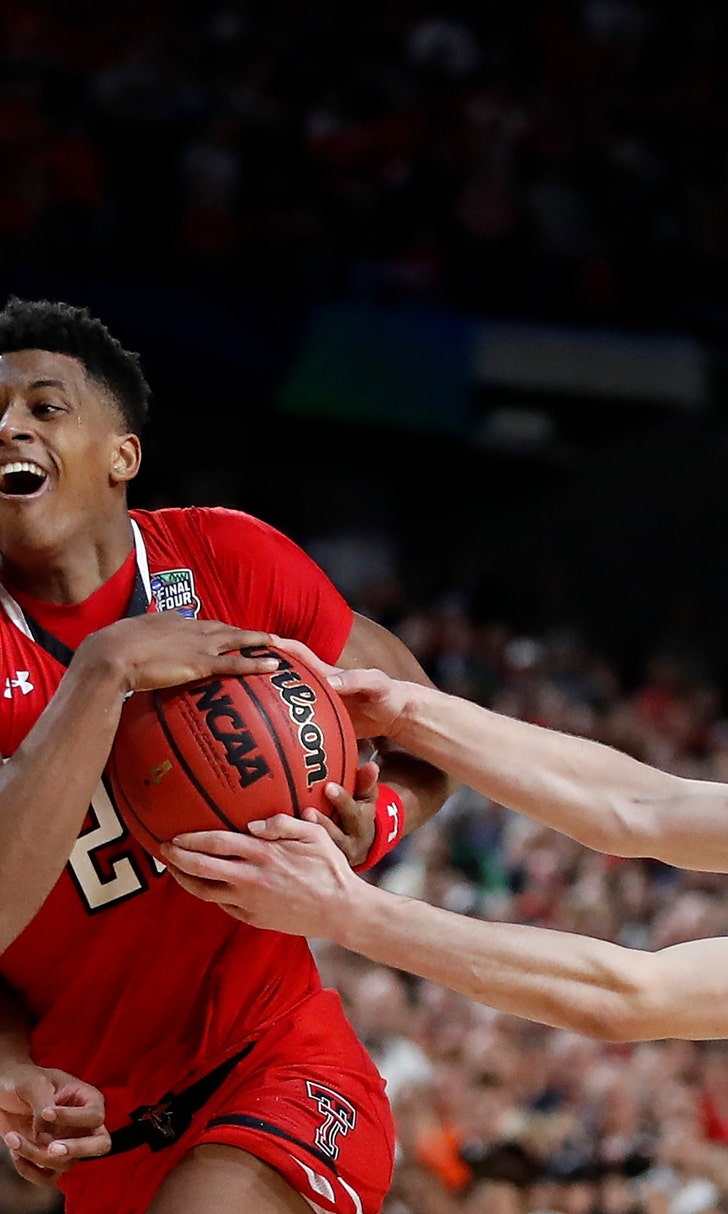 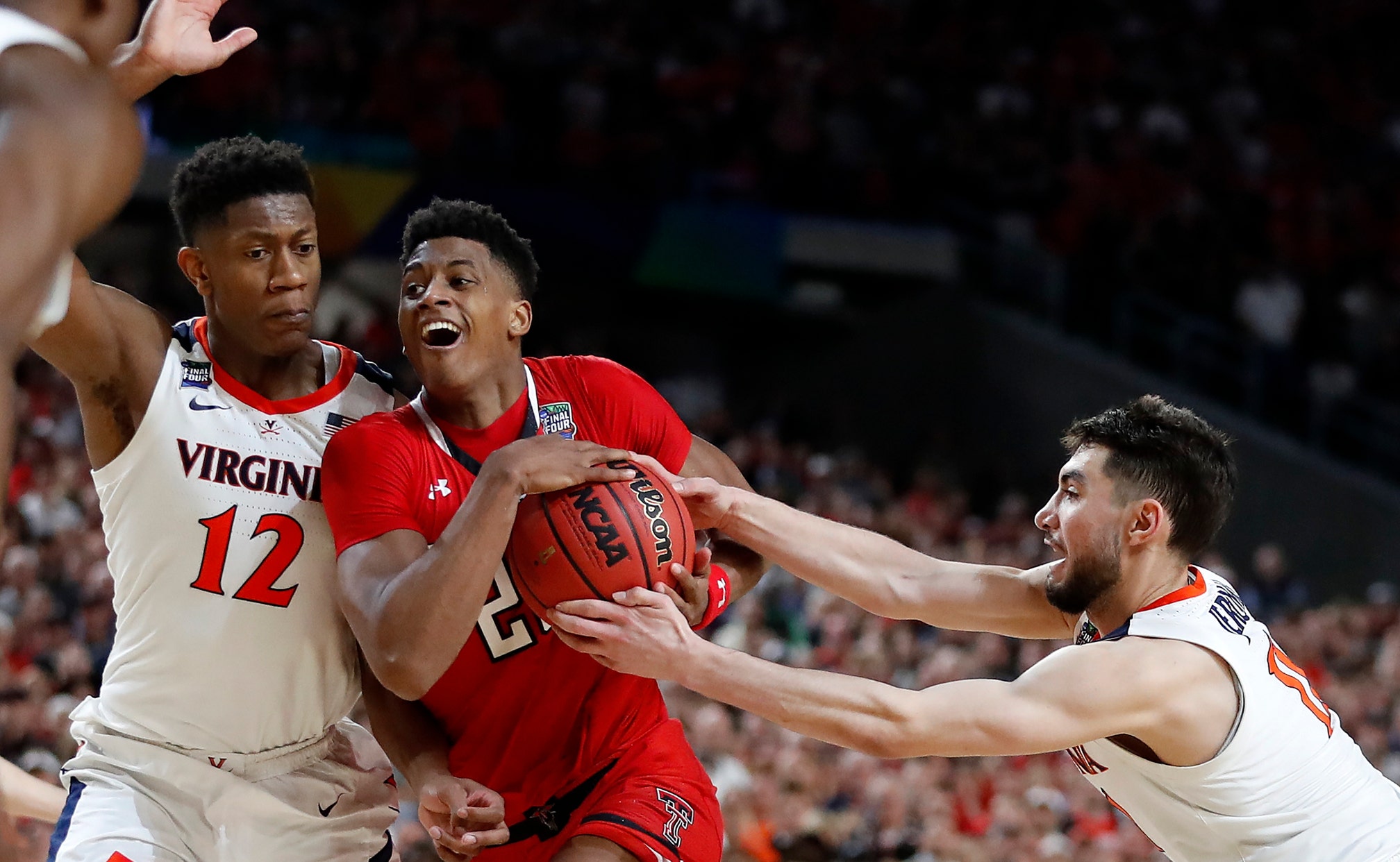 MINNEAPOLIS (AP) — Jarrett Culver walked slowly around the perimeter as the final buzzer sounded, in a bit of a daze as he tugged his jersey to his chin.

Texas Tech's sophomore star looked as if he were surveying the scene of his struggles.

Culver missed 17 of his 22 attempts from the floor, including all six tries from 3-point range, and his 15 points weren't enough for the Red Raiders to overcome Virginia's super-efficient offense in this 85-77 loss to the Cavaliers in overtime in the national championship game of the NCAA Tournament on Monday night.

"We'll all remember each other. We're all family," Culver said, reflecting on a declaration by teammate Brandone Francis about how the runner-up is so often forgotten. "This is something we'll cherish for the rest of our lives, but I understand where he's coming from and how much it hurts to get second."

As the confetti fell at U.S. Bank Stadium, signaling the end of Texas Tech's remarkable run through March Madness, two rounds further than any other team in program history had made it, Culver went to console seniors Francis and Matt Mooney before an extended embrace with coach Chris Beard.

Then he left the court, maybe for good, at least as a college player, since he's projected as a top 10 selection in the NBA draft this summer.

"I know my position. I've just got to pray about it, talk to my family and coaches, and see what my future holds," said Culver, the Big 12 Conference Player of the Year who averaged nearly 19 points per game this season.

Culver's lottery-pick peer on the other side, De'Andre Hunter , bested him with a 27-point performance that came largely with Culver trying to defend him. Culver, the native of Lubbock, Texas, raised just miles from campus, missed all three shots he took in the extra period.

Hunter hit a pullup jumper on Culver with 2:21 remaining in regulation, and then Culver missed a 3-pointer on the front end of the rim before Kyle Guy flicked a layup in off the glass for a 65-61 lead for the Cavaliers with 1:44 remaining.

Davide Moretti and Norense Odiase helped push the Red Raiders back to even, and Culver contributed his best play of the game in that closing stretch, a 360-degree spin dribble in the lane to elude Hunter and find space to flip in a left-handed layup.

But he just didn't have enough of those to go around. When star players start games cold, they can be prone to forcing shots down the stretch to try to catch up, and Culver was mostly out of sync while trying to recover.

Culver had a dunk blocked by Mamadi Diakite in the first half and twice threw a lob pass into the post for a turnover. His only success came when he used his off-the-dribble quickness to find a crease in Virginia's defense that allowed him to get close enough to the rim. The second team All-American missed his first eight attempts from the floor, finally getting a shot to fall on a pullup jumper with 11:15 left in the second half that cut Virginia's lead 50-43.

On the final possession of regulation, after Hunter's 3-pointer tied the game at 68-all with 14 seconds remaining, Culver missed a 3-pointer from the left wing.

The Cavaliers can play defense, too, donning that unglamorous part of the sport as just as much of a merit badge as the Red Raiders. They had their paint-packing scheme in prime form to match the magnitude of the game, squeezing so many of Texas Tech's possessions into the final seconds of the shot clock.

The Red Raiders had plenty of open looks at the basket, too, that they just didn't take enough advantage of. They missed their first eight shots of the game, until Moretti's 3-pointer swished through with 7:20 elapsed. Their first five makes were actually from behind the arc, until a dunk by Owens with 6:39 left in the first half.

Texas Tech's biggest celebrity fan, former quarterback and reigning NFL MVP Patrick Mahomes III, flexed his right bicep for the crowd when the camera showed him on the scoreboard during a timeout, and the Red Raiders could have borrowed some of his accuracy.

Mooney, the hero of the Final Four win over Michigan State, finished with only 10 points on 4-for-9 shooting after making only one shot before halftime. The senior guard, playing for his third school in the final season of a circuitous college career not unlike the other vagabonds and afterthoughts on this close-knit team that Beard assembled, was so devastated in the locker room afterward he was barely audible as he answered questions from reporters with his head hung down.

"I know a lot of people didn't think we could make it here," Mooney said, "but we believed all along."

Soon after, Francis came over to sit in front of Mooney and Tariq Owens and clasp hands at their stalls, the three red-eyed departing seniors trying to weigh their made-for-a-movie season against the final game that, for now, felt so bad.

"I'm thinking about a lot of plays I could've made, my teammates could've made," Francis said, "but I feel like we gave them all they could handle."