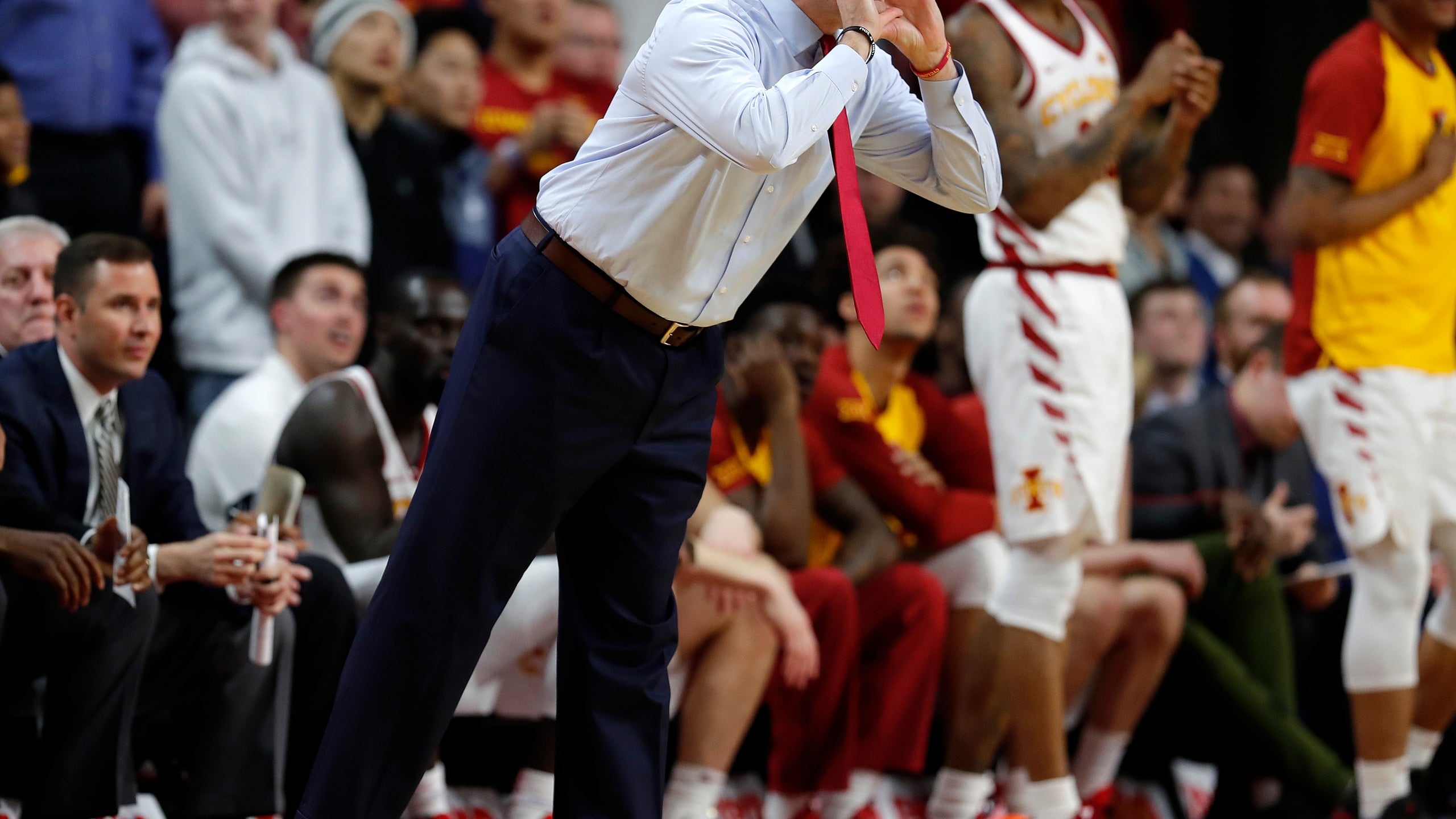 AMES, Iowa (AP) — Iowa State might have blown its shot at the Big 12 title because it suddenly and somewhat inexplicably can't win in Ames.

Makia Mason scored 14 points on 18 shots in his return from a toe injury for the Bears (17-9, 8-5 Big 12). They outrebounded Iowa State 44-28 and grabbed 18 offensive boards over the smaller Cyclones, who've dropped back-to-back games at Hilton Coliseum — dubbed "Hilton Magic" because of how well the Cyclones typically play there.

"They came in here and kicked our butts," Iowa State coach Steve Prohm said. "We've got to find a way to be tougher. That's the bottom line."

But for the third time this season, the Cyclones lost a home game they were favored to win.

After trailing by 10 points midway through the first half, Iowa State went ahead 52-50 on Marial Shayok's three-point play with 11:45 left. Baylor swapped the lead with the Cyclones (19-7, 8-5) seven times in the next eight minutes, but Butler followed a layup with a 3 to put the Bears ahead 69-65 with two minutes left.

"We just made a couple more shots down the stretch. I'm just really proud of the way our guys responded in a tough place to play down the stretch," Baylor coach Scott Drew said.

Iowa State's Cameron Lard then fumbled an entry pass from Shayok, and Mason hit two free throws to make it 71-65 with 35.3 seconds to go.

Shayok had 20 points for Iowa State, which went nearly six minutes without a field goal down the stretch.

"This is embarrassing," said Iowa State's Nick Weiler-Babb, who had 10 points. "They made a run early and we just laid down and took it."

Iowa State: Iowa State, which also lost to TCU and Kansas State in Ames, fell two games behind the league-leading Wildcats. "It's really mind boggling, to be honest with you," Prohm said of his team, which beat K-State, Texas Tech and Mississippi on the road. "If you play the right way and you get beat, you get beat. We've got good teams in this league. We didn't play the right way."

Baylor: The Bears moved into a tie for third in the Big 12 with the Cyclones, just two games back of K-State. But they still have the Wildcats and Kansas on the road, so it's hard to see Baylor as a true threat just yet. But the Bears won in Ames for just the third time in 17 tries.

One bright spot for Iowa State was freshman Tyrese Haliburton. After passing up too many open looks recently, he buried 3 of 4 3s. ...Eight different players grabbed offensive boards for Baylor. ...The Cyclones had just five turnovers. ...The Bears had 18 second-chance points and led for nearly 31 minutes.

"I'm just trying to win. That's it," Butler said about his crucial 3 with two minutes left. Butler saw his defender slip under the arc, allowing just enough space for him to get a contested shot up.