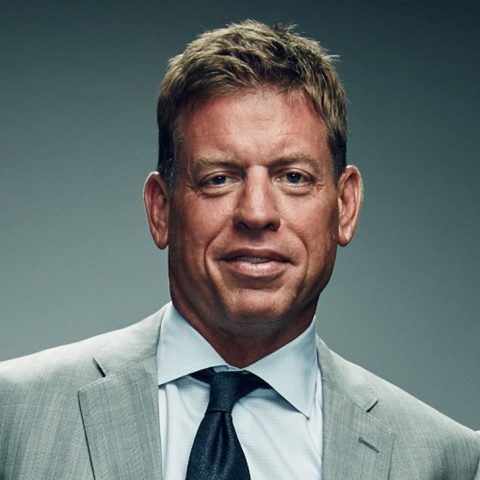 Pro Football Hall of Fame quarterback Troy Aikman along with FOX NFL play-by-play announcer and Emmy Award-winner Joe Buck are the second longest broadcast tandem to call NFL games. The duo is second only to NFL broadcasting legends Pat Summerall and John Madden. Aikman will call his sixth Super Bowl alongside Buck in Super Bowl LIV from Miami, FL on FOX. In addition to rules analyst Mike Pereira, reporters Erin Andrews and Kristina Pink, the duo called Thursday Night Football on FOX in 2018 for the first time on the network.

Aikman ascended to the lead FOX NFL on-air team prior to the 2002 season. Gifted at succinctly illustrating and explaining on-field action, Aikman’s analysis offers insight into the nuance and skill associated with playing in today’s NFL. After one season in the broadcast booth, Aikman was elevated to the network’s No. 1 broadcast team alongside Buck and analyst Cris Collinsworth. Aikman has called five Super Bowl broadcasts, all on FOX – Super Bowl XXXIX from Jacksonville with Buck and Collinsworth, Super Bowl XLII in Arizona, Super Bowl XLV in North Texas, Super Bowl XLVIII in New York and Super Bowl LI from Houston. Aikman earned an Emmy nomination in the category of Outstanding TV Event Analyst for his work during the 2003, 2005 and 2007 seasons.

After retiring from professional football at the conclusion of the 2000 season, Aikman joined FOX as an NFL game analyst and quickly displayed the proficiency and work ethic that marked his playing career. In 2001, he teamed with Dick Stockton and former teammate Daryl Johnston to form the network’s No. 2 team. Near the end of his rookie season in the booth, Sports Illustrated named him TV’s “Best Newcomer.” Aikman first cut his teeth as a game analyst during the 1998 and 2000 NFL Europe League seasons, gaining valuable experience working for Fox Sports Net alongside Brad Sham.

Prior to joining the Cowboys, Aikman passed for 5,298 yards and 41 touchdowns in two years at UCLA. During that span, the All-American led the Bruins to a 20-4 record. In 1999, he was inducted into the UCLA Sports Hall of Fame. He transferred to UCLA after two seasons at the University of Oklahoma (1984-85). Selected by the Cowboys with the first overall selection in the 1989 NFL Draft, he became the first rookie quarterback to start a season opener for Dallas since Roger Staubach in 1969. In 2009, Aikman was voted into the College Football Hall of Fame.

Aikman was raised in Cerritos, Calif. His family moved to Henryetta, Okla., when he was 12. Aikman went on to earn All-State honors at Henryetta High School. Founded in 1992, The Troy Aikman Foundation for Children has touched many young lives through services such as creating colorful recreation areas in children’s hospitals. Aikman resides in Dallas and has three daughters, Rachel, Jordan and Ally.