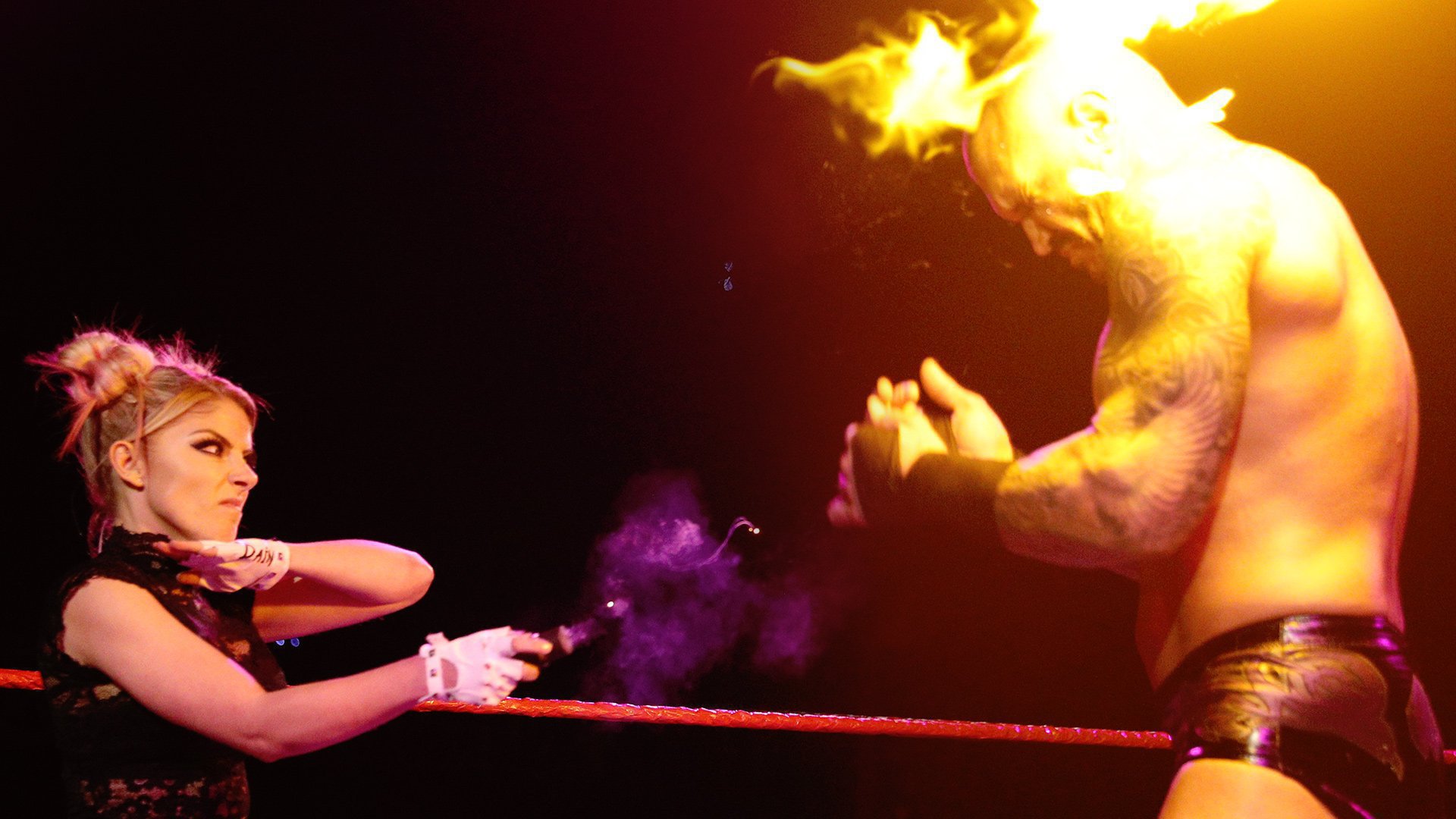 Triple H and Randy Orton traded haymakers, Keith Lee & Sheamus teamed up for a win before battling it out themselves, Bobby Lashley successfully defended the United States Title against Riddle and more.

The Queen came into the match infuriated by the “classless” actions of The Sassy Southern Belle, as Lacey Evans played mind games with her wooing of Ric Flair last week at Raw Legends Night. Charlotte Flair targeted Evans from the opening bell, but the entrance of her WWE Hall of Famer father forced her to keep one eye outside the ring throughout. A Natural Selection from the Women’s Tag Team Champion appeared to have victory assured, but Ric placed Evans' foot on the rope to break the count. Once the action picked up again, The Dirtiest Player in the Game tripped up his daughter just as he did last week, which provided Evans the opportunity to pounce for the win.

Due to a temporarily debilitating thumb injury, Elias was originally unable to compete against Jeff Hardy, but Jaxson Ryker filled in to show his loyalty to “The Universal Truth.” The blisters weren’t enough to keep Elias from interfering in the match, as his distraction allowed Ryker to swoop in for a devastatingly quick roll-up with a bit of extra leverage for the win.

After the conclusion, Hardy called out Elias, and the originally intended showdown was back on. The musician played his way into some early offense, but a signature Swanton Bomb from The Charismatic Enigma put the finishing note on Hardy’s triumph.

The Miz & John Morrison have been flying high since Mr. Money in the Bank had his contract returned, but picking a fight with the colossal tandem of Keith Lee & Sheamus may have been a little more than just ill-advised. Lee flexed his muscle early by smashing Morrison so furiously into the corner that the turnbuckle exploded to the delight of the powerhouse. There was still more punishment in store for The Guru of Greatness, as Sheamus delivered a Brogue Kick to Morrison to clinch the victory.

The honeymoon phase didn’t last long for the pairing of Keith Lee and Sheamus, as the two behemoths began brawling after their win. The two traded haymakers, as The Celtic Warrior went to work on the left arm of his opponent. Lee gritted through the pain to author one more amazing feat of strength with a Spirit Bomb of Sheamus to give himself the last laugh. Lee offered a fist bump after the bell, and Sheamus instead embraced his fellow colossal competitor.

Xavier Woods was riding solo in his latest showdown with RETRIBUTION’s T-BAR. The New Day bandleader fought valiantly as a dropkick off the top rope sent T-BAR flying out of the ring. The rest of RETRIBUTION stepped in to create a distraction that allowed T-BAR to crush Woods with a crushing knee to set up the pin.

Controversy surrounded Riddle’s victory over Bobby Lashley last week, and the United States Champion was intent on leaving no doubt this time. The All Mighty went on the offensive before the opening bell, and when the moment arose for a Hurt Lock, Lashley locked in and forced the clear tapout for the win.

With the poor taste of defeat in his mouth, Riddle called out MVP and looked to salvage something out of his night. As it turned out, Lashley was the one who was far from finished with his plans for the night. As Riddle battled with the leader of The Hurt Business, the United States Champion landed a crushing Spear, and the beatdown of Riddle began.

Drew Gulak was eager to take a spot in the Royal Rumble, but Adam Pearce wanted the up-and-comer to earn it. Gulak would have to topple AJ Styles to secure a place in the field of 30 competitors, and The Phenomenal One brought his own reinforcements. With Gulak close to a breakthrough, Omos insured the safety of his associate, and Styles landed a Phenomenal Forearm to keep his opponent’s Royal Rumble dreams dormant.

Before the match, Mandy Rose & Dana Brooke declared for the Royal Rumble, but Nia Jax & Shayna Baszler presented the most immediate roadblock for the tandem. The two teams were set on stating their cases as the top contenders to the WWE Women’s Tag Team Titles. With Jax seemingly set up to finish off Rose, Baszler tagged herself in to dish out a Kirifuda Clutch to force the tapout. The individual talents of Jax & Baszler won out again, but the relationship remains as tenuous beneath the surface as ever.

The Game rolled through Raw looking to put a stop to Randy Orton’s endless reign of terror for the iconic Superstars of WWE. The Viper pushed Triple H’s buttons at the beginning of the night and coaxed The King of Kings into a fight. The two former Evolution stablemates traded blows until Triple H grabbed his trademark sledgehammer and prepared to level The Legend Killer. Just as Triple H entered the ring, the lights went out, and the sounds of The Firefly Fun House filled the WWE ThunderDome. Alexa Bliss appeared in the ring and shockingly unleashed a fireball to the face of the sadistic Orton, who screamed in agony as Raw concluded.

Triple H will return to the red brand tonight to kick off tonight's Raw.

What will The Game have to say following a shocking Raw Legends Night?

Don't miss The King of Kings at 8/7 C on the USA Network.

Fast data off fast boats to highlight SailGP's second season The second season of the SailGP global league will be awash in data that will benefit sailors as well as TV viewers, thanks to its association with tech billionaire Larry Ellison,...
5 MINS AGO • ASSOCIATED PRESS
Fox Sports™ and © 2021 Fox Media LLC and Fox Sports Interactive Media, LLC. All rights reserved. Use of this website (including any and all parts and components) constitutes your acceptance of these Terms of Use and Updated Privacy Policy. Advertising Choices. Do Not Sell my Personal Info