Stay with WWE.com for live results. 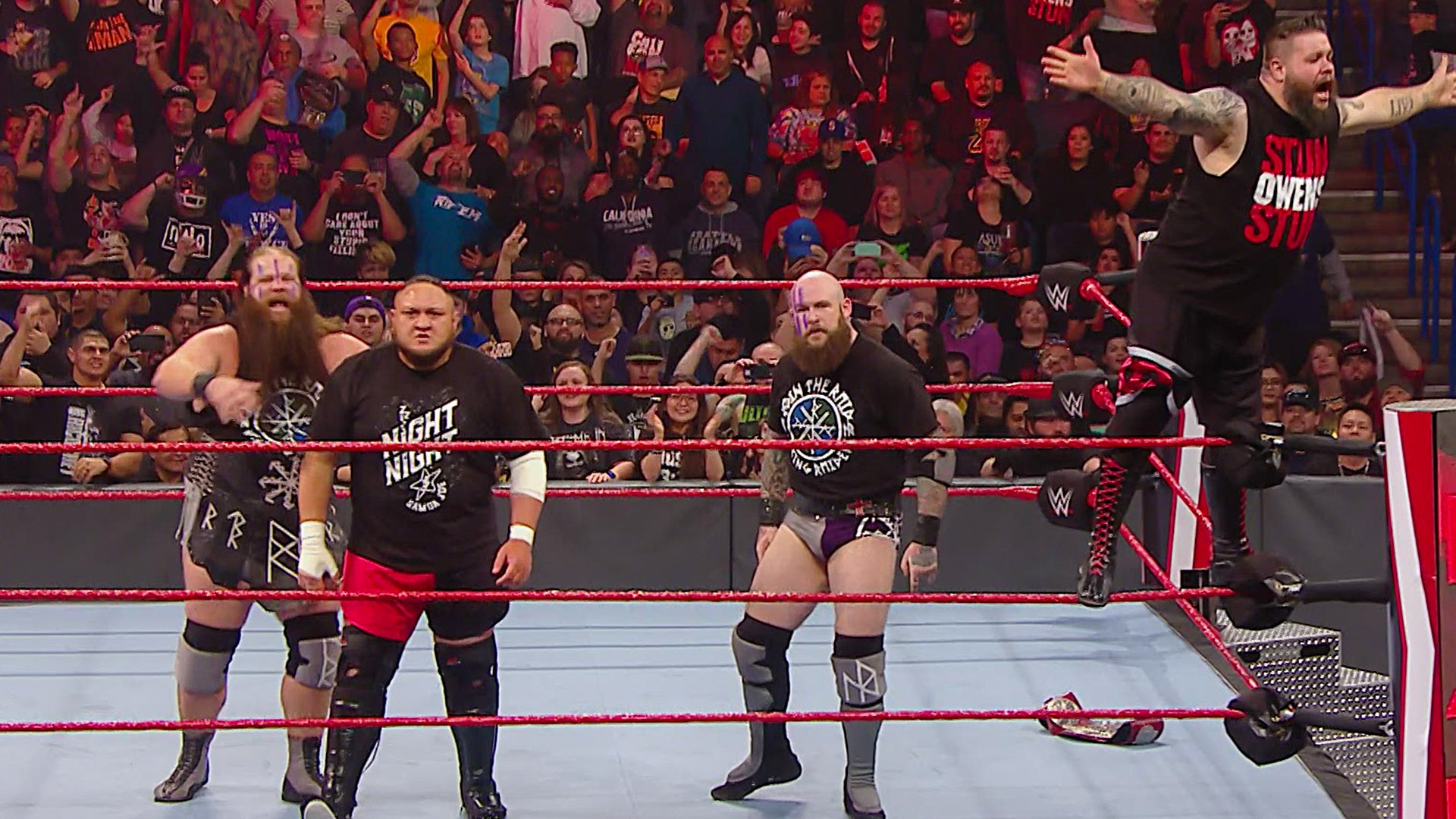 ONTARIO — Given that Seth Rollins and his cohorts have more or less pulled ahead of the makeshift Kevin Owens-Samoa Joe-Viking Raiders alliance, it seemed like as good a time as any for Rollins to take a victory lap and bask in the glow of his own personal Messiah complex, not to mention the fact that his enemies seem to be plagued by the injury bug. Unfortunately for him, the gloating may have been somewhat premature.

For all Rollins’ insistence that Owens was setting himself up for martyrdom by failing to keep his allies upright, KO’s forces were back to full strength, as demonstrated by the sudden return of Samoa Joe. The two-time United States Champion made his presence known in the scrum between the two squads, dragging Rollins to the mat in the Coquina Clutch and helping KO score a long-awaited blow against Rollins and his disciples. And for Owens, whose motto has been “just keep fighting,” it’s looking like he might finally get a win to go with it.

Shayna Baszler takes a bite out of Becky Lynch

Becky Lynch’s “superpowers” held firm on Raw, as The Man once again narrowly yet decisively beat back Asuka to retain the Raw Women’s Championship. That was about the only good thing that happened to the champ, though, as NXT’s Shayna Baszler ruthlessly attacked Becky after the match, quite literally taking a piece out of the Raw Women’s Champion.

For all intents and purposes, The Man was a sitting duck. Lynch squeaked out the win against Asuka with a modified Manhandle Slam following a series of rollup counters, but the worn-down champion stood little chance against a full-strength Shayna Two-Times. The Submission Magician rained blows on Lynch’s head, locked her in the Kirifuda Clutch and seemingly bit a chunk out of the back of Lynch’s neck. And while The Man was able walk out under her own power, she did so with the grim realization of what those superpowers have gotten her: pieces of herself on the mat and a rogue’s gallery that has grown by one.

As any football head knows, finding a good offensive lineman is crucial to success, so Mojo Rawley might want to go back to the drawing board with Riddick Moss: What appeared to be a demoralizing loss by the NXT veteran turned out to be an elaborate ruse to relieve Rawley of the 24/7 Championship.

Mojo should have perhaps seen it coming. Moss is a physical specimen, but he was more or less steamrolled by the Profits, who pinned him instantly with a spinebuster-Frog Splash combo. None the wiser that something was amiss, Mojo went to his partner’s side and was quickly pinned via small package. Riddick made his exit and Rawley lost it in the ring. The ruse was complete. As they say on Sports Twitter, you truly hate to see it.

McIntyre and MVP come to blows on The VIP Lounge

The hustle never stops for Montel Vontavious Porter, but the two-time United States Champion may have overplayed his hand during a VIP Lounge with Drew McIntyre that turned on a dime into a tense (and unsuccessful) negotiation of sorts when MVP pitched himself as McIntyre’s business manager.

Given their long history together, and MVP’s stated desire to transition behind-the-scenes, it wasn’t the worst idea on paper. But McIntyre refuted the idea that he needed anybody handling his business, leading to a confrontation that was as heated as it was brief. When MVP laid hands on his guest, the self-proclaimed “Sexy Scotsman” dropped MVP to the mat with a Glasgow Kiss and Claymored him right over the VIP Lounge couch before hitting the “Ballin’!” taunt for good measure. Whatever lies ahead for Drew McIntyre remains unclear, right down to his opponent at WrestleMania. But whether it’s win, lose or draw, he’s going to get there on his own merits.

Hyperbole aside, Angel Garza’s Raw debut truly was one of the more impactful in recent memory. He got his cousin Humberto Carrillo so riled up that Carrillo came out seeking payback for Garza’s Hammerlock DDT onto the concrete, dropping Garza before the former NXT Cruiserweight Champion’s bout with Cedric Alexander.

As Carrillo was removed from ringside, Alexander went on the attack, getting himself to the cusp of victory with a burst of aggression. But Garza — “the man’s man” — dropped his foe out of midair with a dropkick, removed his tearaway pants with unmatched panache and hit the Wing Clipper to win. With Carrillo still lying in wait, Garza’s ultimate comeuppance may still be coming down the road. Until then, our one option is to watch him win. Whether we like it or not is, unfortunately, beside the point.

The idea of Rhea Ripley vs. Charlotte Flair at WrestleMania is … tantalizing, to put it mildly. But Ripley still had a little bit of locker room business to attend to, battling a riled-up Sarah Logan before once again attempting to prod The Queen into a historic match at The Show of Shows.

Logan’s impetus for poking the bear was that Ripley thought she could come to Raw and do what she wanted with impunity, which motivated her to defend her turf. Despite Logan’s bravery, The Nightmare swiftly dispatched her with the Riptide while Charlotte watched from the ramp. But if The Queen (coming off a less-than-welcome return to NXT) was moved to accept Ripley’s WrestleMania offer, she didn’t show it. Instead, she pointed out that, depending what happens this Sunday at NXT TakeOver: Portland, Rhea Ripley might not be NXT Women’s Champion much longer. It seems if Rhea wants her answer, she’ll have to earn it.

Depending on whom you ask, Ricochet either achieved the impossible by pinning Bobby Lashley to earn a title bout with Brock Lesnar — or, he stole The All Mighty’s victory, his moment and his dream. Despite Lashley’s vow to return Ricochet to “reality,” however, the former United States Champion pinned Lashley once again to bring himself one step closer to his dream of the WWE Championship.

He did it pretty expertly, too: For a “scrawny kid,” Ricochet certainly rose to Lashley’s level, withstanding a massive amount of punishment to pin Lashley with the 630. Based on the state of him, Ricochet may have to make good on his promise to “crawl” to Super ShowDown if need be. That said, if nothing else, this should prove that last week’s win was no fluke. If he beats Lesnar, that won’t be, either. 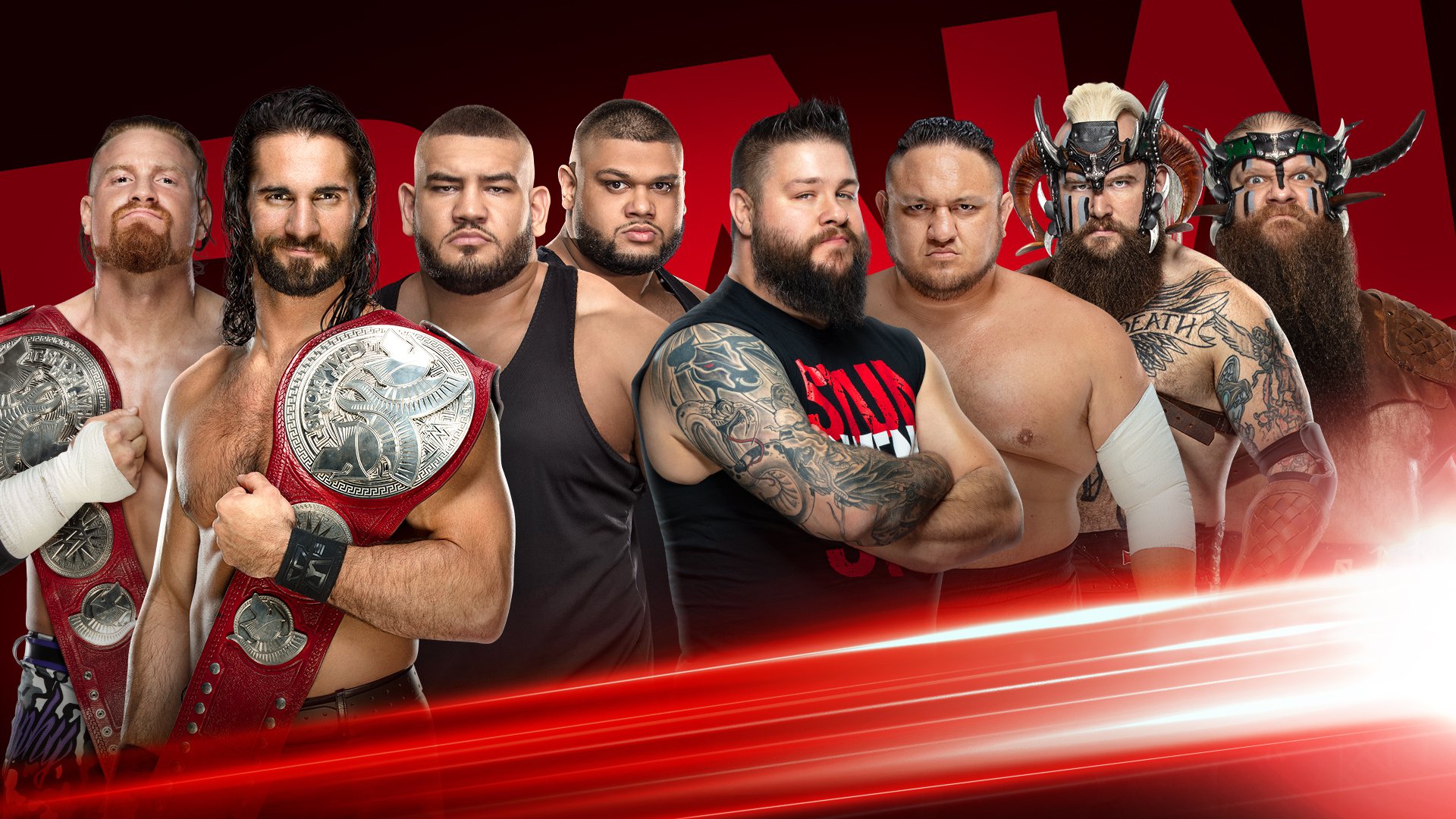 An epic Eight-Man Tag Team Match will pit Raw Tag Team Champions Seth Rollins and Murphy with AOP against Kevin Owens, Samoa Joe & The Viking Raiders. The match was first reported by Sports Illustrated in an interview with Seth Rollins, as The Monday Night Messiah continues to pull the strings of the Raw locker room.

Last week on Raw, Murphy & AOP took out KO & The Viking Raiders in a grueling six-man tag bout, thanks to a little help from Rollins. Despite his squad coming up short, KO received a standing ovation from the WWE Universe after eliminating Murphy and Akam and eventually being pinned by Rezar.

Tensions between the opposing groups carried over into last week’s main event – a Triple Threat war with major implications for Rollins. A Rollins victory against Bobby Lashley and Ricochet would have given him exactly what he has been thirsting for – a chance to challenge WWE Champion Brock Lesnar at WWE Super ShowDown.

Unsurprisingly, AOP & Murphy got involved in the match, but Owens and Erik evened the odds, and Ricochet scored a win to earn a chance at The Beast.

With the WWE Universe behind them, can Owens & Co. draw from that potent backing and parlay it into a win? Or, will the self-proclaimed Monday Night Messiah lead his squad to victory? Find out tonight at 8/7 C on USA Network!