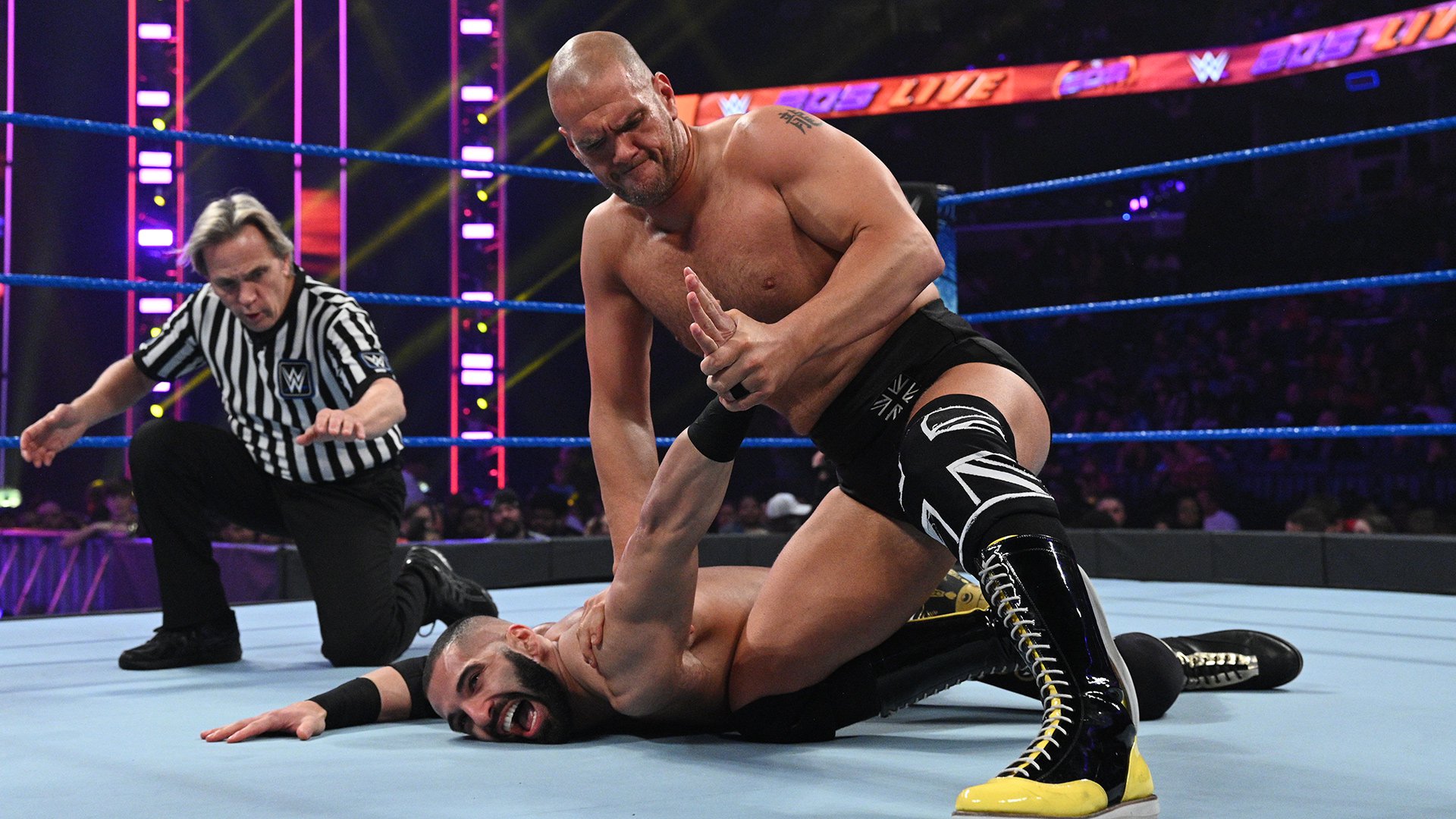 Ariya Daivari has taken a great deal of pride in the fact that he is one of the original members of the WWE 205 Live roster. As a result, he has focused on battling all the new faces competing in the Cruiserweight division which has brought him toe-to-toe with Danny Burch.

As the first WWE 205 Live match of 2020 got underway, Daivari quickly took down his opponent and oozed confidence as he taunted Burch from the corner. However, the British Superstar quickly recovered and took The Persian Lion to the mat by using his power and technical ability.

Ascending the ropes and taunting the WWE Universe in Memphis by mimicking Jerry “The King” Lawler, Daivari found himself on the receiving end of a boot to the face and a screeching halt to his momentum.

Burch fed off the energy of the WWE Universe and unloaded on his opponent. After missing a splash from the top rope, Daivari was locked in a submission hold, but a masked fan appeared on the ring apron, distracting the official and allowing Daivari to take down Burch with a low blow and Hammerlock lariat for the win.

After the match, the masked fan revealed himself to be The Brian Kendrick. The Man with a Plan addressed the WWE Universe to remind everyone that he was the reason the WWE Cruiserweight division exists before he executed Sliced Bread No. 2 on Danny Burch, much to Daivari’s delight. 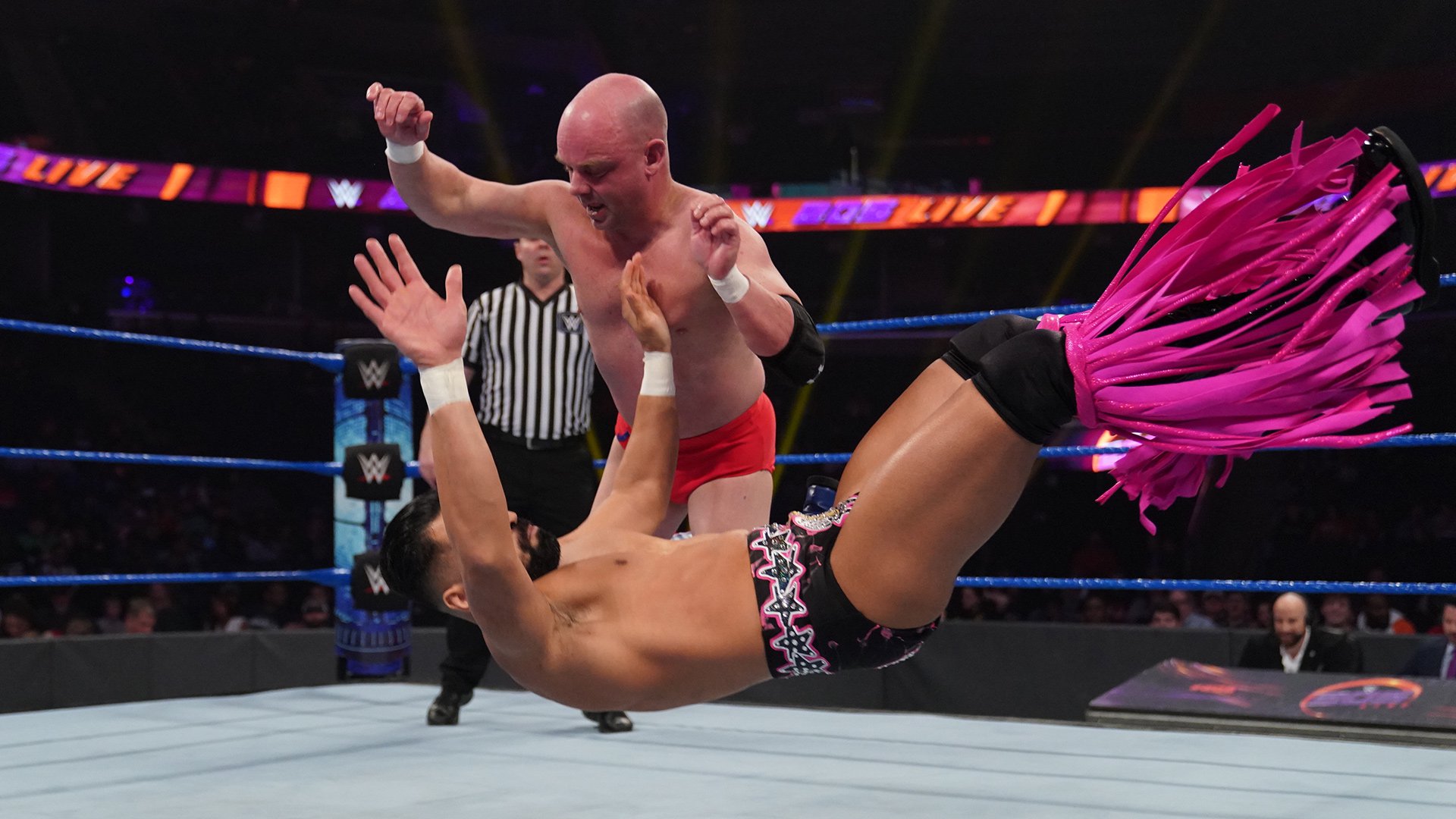 Following a successful and eventful 2019, especially at the end of the year, The Singh Brothers looked to continue their momentum into 2020 with a tag team battle against Corey Storm and Anthony Wayne.

As the opening bell sounded, Samir Singh was quick to assert his dominance against Wayne before tagging in his brother, who encouraged his opponent to tag in his partner. Unfortunately, Storm didn’t fare much better against Sunil, but a last-minute counter allowed him to tag in Wayne, and they mounted a brief but successful offense.

However, Sunil took down Wayne with a spinning heel kick that led to a Bollywood Blast and the first victory of 2020 for the Bollywood icons. 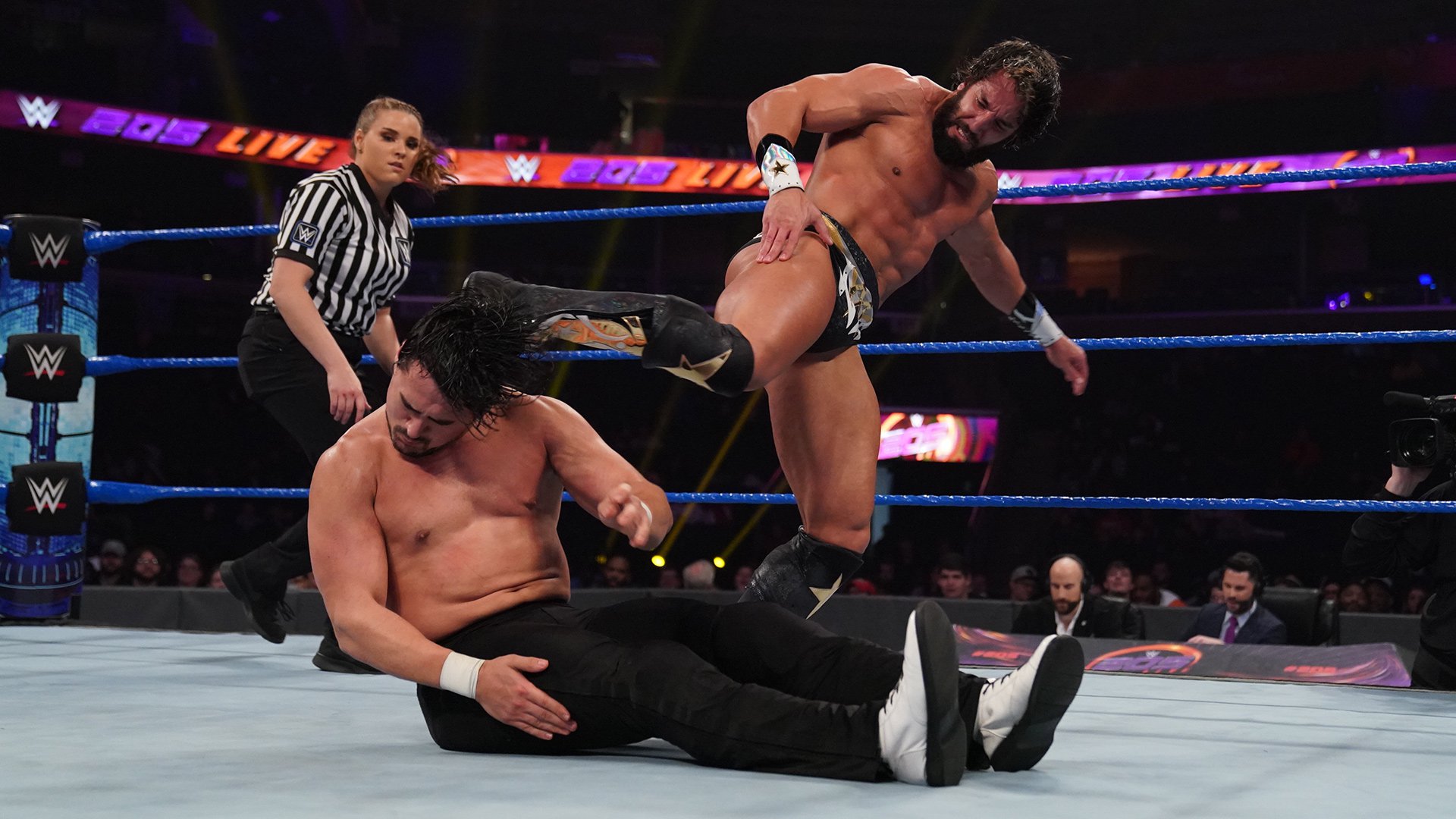 Looking to repeat his success from 2019, Tony Nese aims to reclaim the NXT Cruiserweight Championship, and he believes the first step to proving he deserves a title opportunity is to defeat current champion Angel Garza.

After some early posturing, Garza prepared to rip off his pants, and Nese charged forward but was pulled to the outside and introduced to the steel steps.

Back inside the ring, the first-ever Mexican NXT Cruiserweight Champion maintained control with perfectly executed innovate maneuvers designed to maximize punishment and focusing his strikes on Nese’s chest and mid-section. In an act of desperation, The Premier Athlete countered a high-risk move from Garza and slowed the pace enough to rely on brute strength.

A fired-up Garza took control with fast-paced lariats and a flying arm drag before finally ripping off his pants. Although he tossed his pants in Nese’s face before landing another superkick, it wasn’t enough to put The Premier Athlete away. Garza struck again by launching Nese over the ropes to the arena floor before executing a moonsault.

The resilient former champion recovered inside the ring and once again put Garza on defense by continuing to press forward at a breakneck pace. Nese launched off the middle rope with a moonsault, but Garza countered and executed the Wing Clipper to pick up his first victory since winning the NXT Cruiserweight Championship. 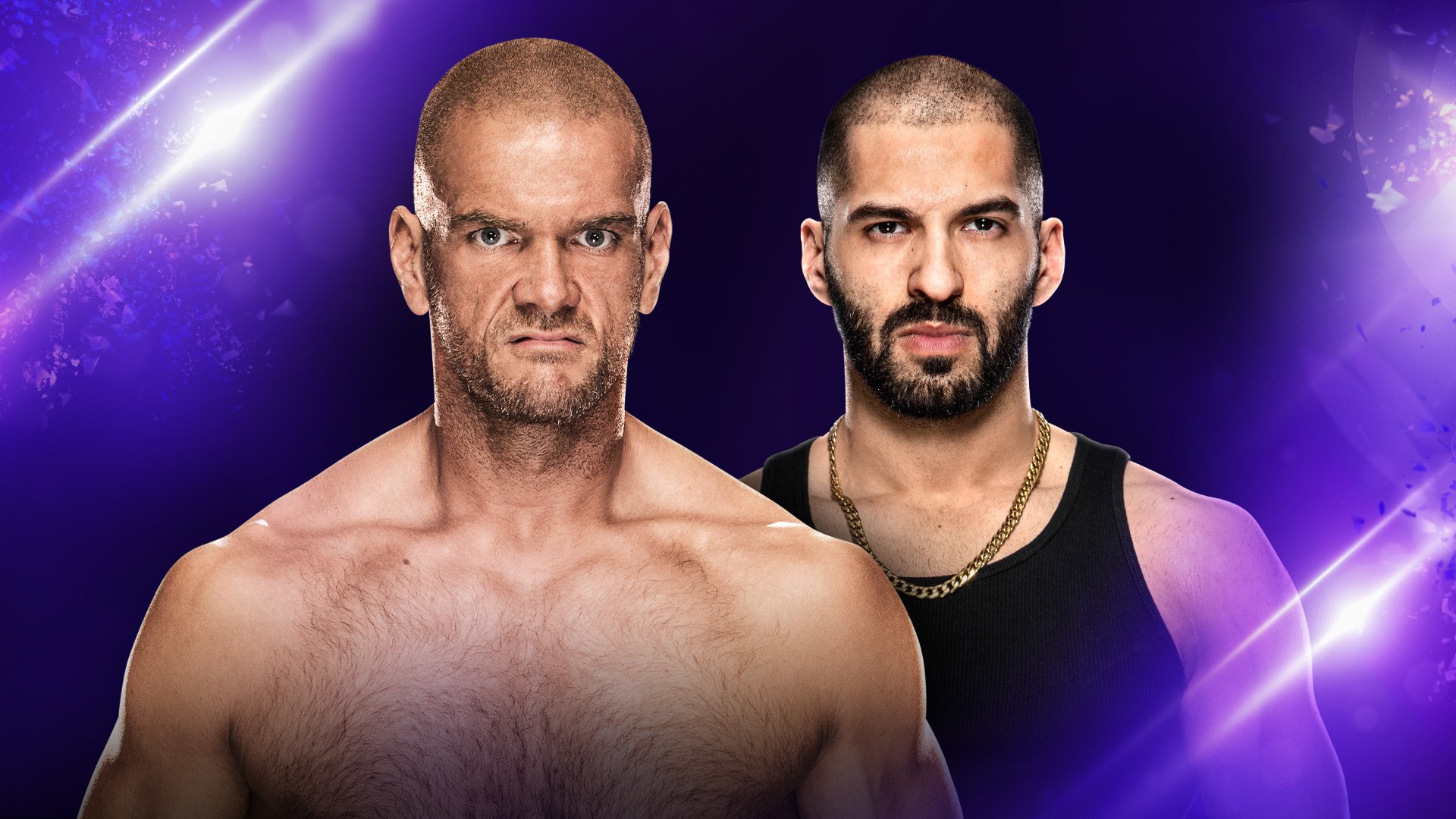 As an original member of the WWE 205 Live roster, Ariya Daivari has taken a great deal of pride in that status and has challenged many of the new faces that have come to the purple brand. His 2020 New Year’s Resolution is to continue his quest to dismantle all new members of the Cruiserweight division, starting tonight with Danny Burch and then refocusing his energy on Raul Mendoza.

Can Daivari match the power and smashmouth style of Danny Burch, or will the hard-hitting British Superstar show The Persian Lion that he’s the new governor of WWE 205 Live?

Will Tony Nese start 2020 with a statement? 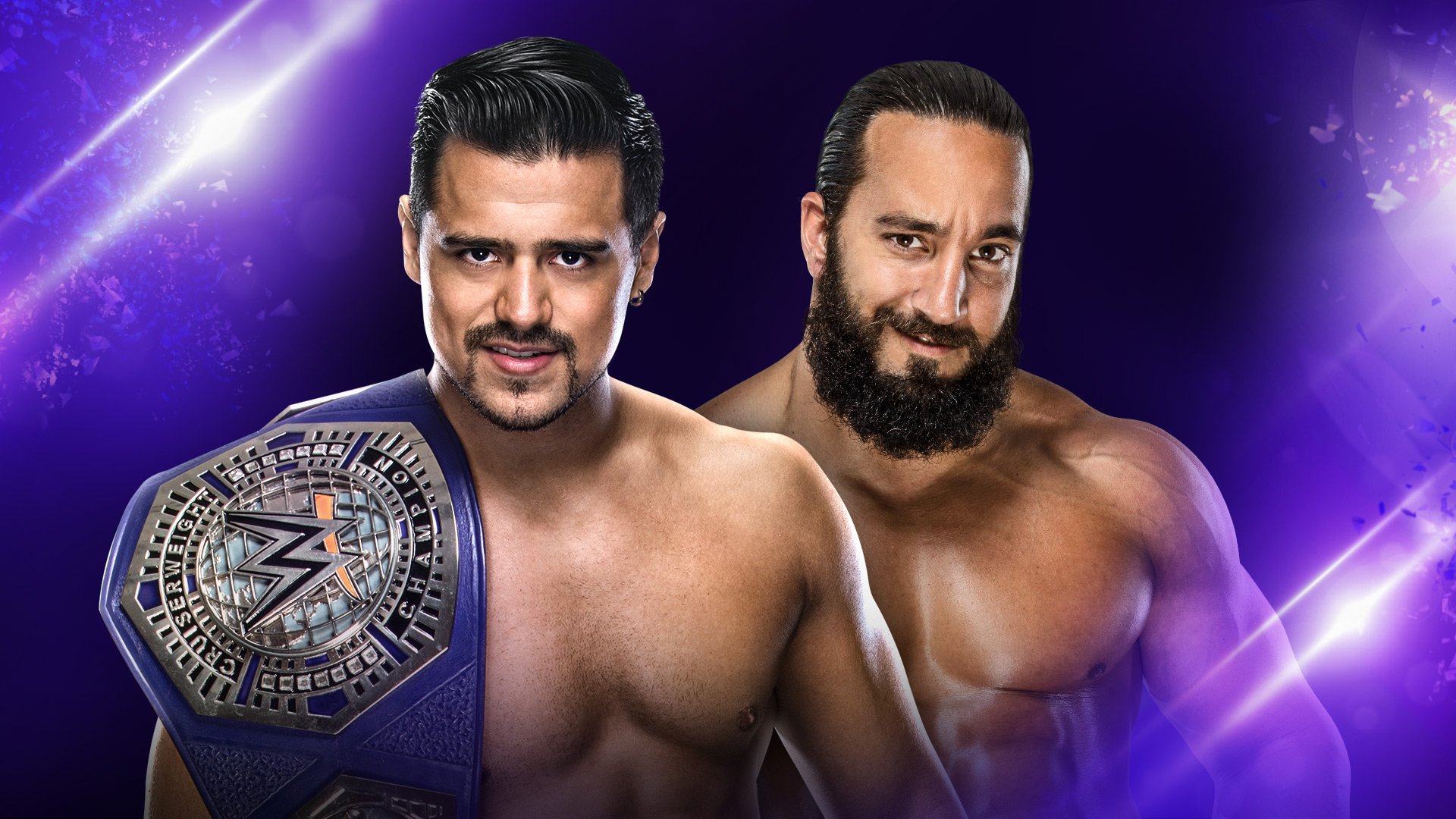 At WrestleMania last year, Tony Nese defeated Buddy Murphy for the NXT Cruiserweight Championship in front of his hometown crowd. Though he eventually lost the title to Drew Gulak, The Premier Athlete has been recalibrating and looking to reclaim the championship ever since. Earlier today, Nese took to Twitter to proclaim that he will again become NXT Cruiserweight Champion in 2020 and challenged current champion Angel Garza, hoping to make his case. Garza responded by accepting the challenge.

Can The Premier Athlete make his case for another title opportunity, or will Garza continue to carry his momentum from 2019 into the new year? Don’t miss WWE 205 Live, streaming live tonight at 10/9 C on the award-winning WWE Network!