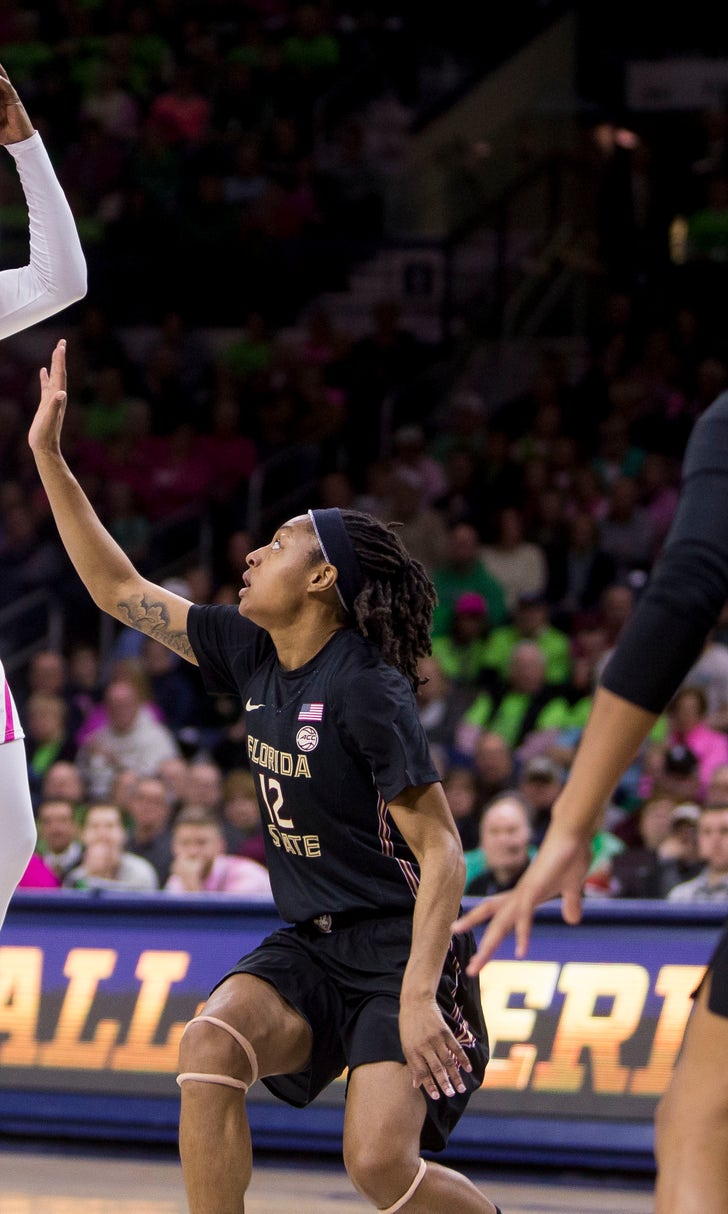 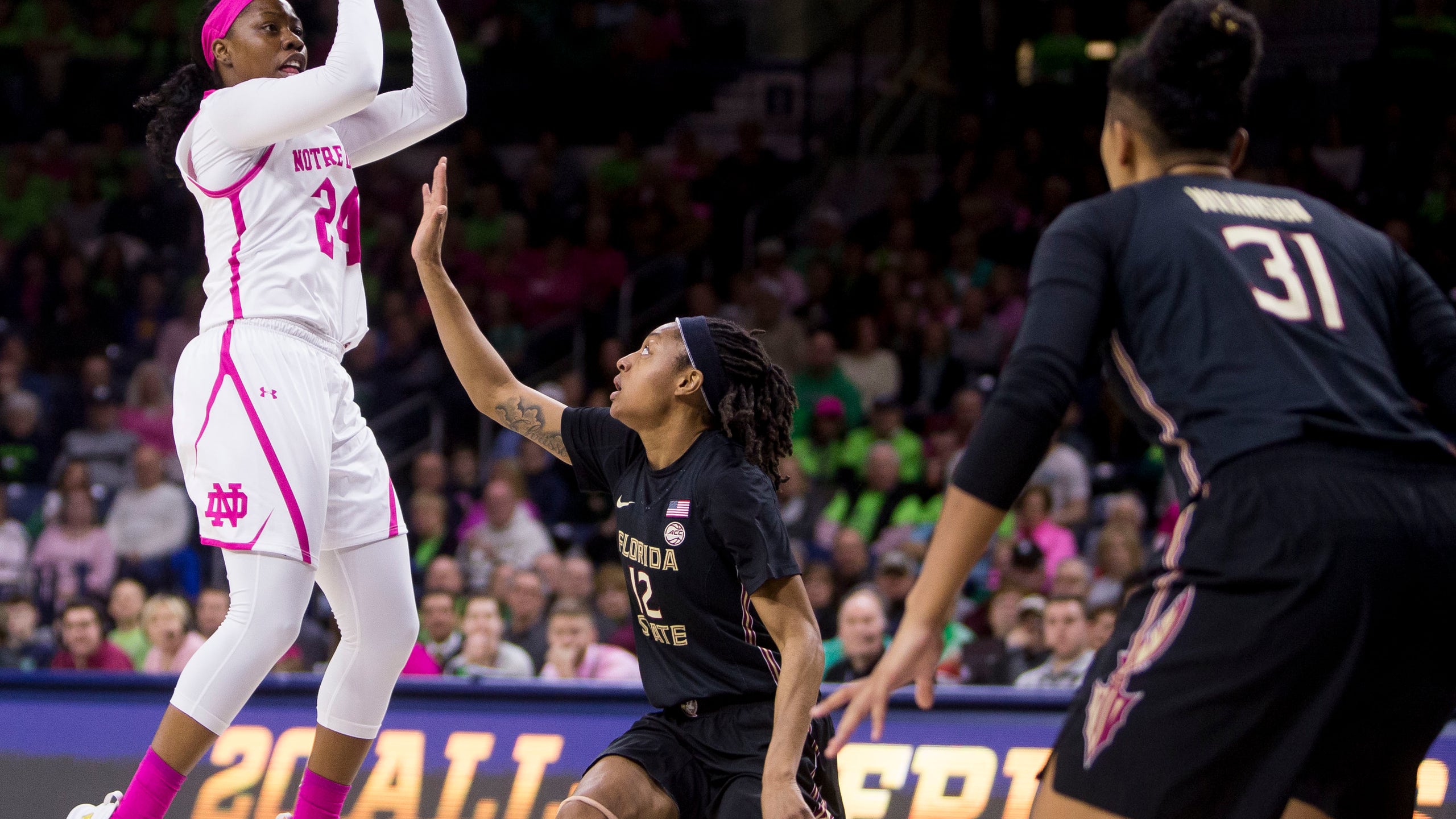 Ogunbowale, Shepard lead No. 4 Irish to rout of No. 24 FSU

SOUTH BEND, Ind. (AP) — Muffet McGraw got the effort she wanted from No. 4 Notre Dame right from the start Sunday, especially from Arike Ogunbowale, in a 97-70 rout of No. 24 Florida State.

"She looked like she was enjoying herself out there," McGraw said after Ogunbowale, who has been struggling of late, scored 27 points. Jessica Shepard added 26 as the Fighting Irish, who had two rare Atlantic Coast Conference losses in their last four games, rebounded from Thursday's 72-65 defeat at No. 25 Miami.

"I've got to be aggressive from the start — I've been kind of laid back," said Ogunbowale, who had 13 points on 4-of-15 shooting against the Hurricanes but hit her first four shots against the Seminoles.

Her 27 points, on 9-of-16 shooting including 5 of 7 from beyond the 3-point line, left Ogunbowale with 2,301 career points, 21 behind current Irish assistant coach Beth (Morgan) Cunningham. Skylar Diggins-Smith is the all-time leader at 2,357. Ogunbowale also had nine rebounds, five assists, two steals and had zero turnovers for Notre Dame (21-3, 9-2 ACC), which turned the ball over just 10 times.

"I was happy with the offense," McGraw said as the Irish shot 52.9 percent (36 of 68) and had a 43-36 edge on the boards after shooting a season-low 37.3 percent and being outrebounded 46-37 at Miami. "We were able to get the break going because we rebounded better."

Shepard had eight rebounds with two assists, including one from her knees when she fed Ogunbowale for a corner 3-pointer that gave Notre Dame a 45-33 lead in the second quarter.

"Arike made a great pass to me and I probably blew it," Shepard said. "I remember seeing her out there and found a way to tip her the ball. Coming off a loss, it was important to come out strong."

Brianna Turner had 13 points, five blocks and four assists, and Jackie Young had 10 points and five assists for the Irish, who had 25 assists, led by Marina Mabrey's six.

"I think they are the best transition team in the country," Florida State coach Sue Semrau said. "We knew with our young pups coming in here that it was going to be a huge challenge and it was."

Nicki Ekhomu scored 26 points, Kiah Gillespie added 17 and Nausia Woolfolk had 15 before fouling out as the Seminoles (20-4, 8-3) lost for the first time on the road this season.

The Seminoles made just 5 of 15 shots in the second quarter and Notre Dame opened a 52-38 halftime lead with the help of a 9-0 run.

Florida State: The Seminoles came into the game with an ACC-leading plus-4.8 turnover margin but made 10 in the first half. It also didn't help that Florida State missed its first six shots of the second quarter. Notre Dame never trailed and had 16-point leads at several occasions in the first half before pulling away in the third quarter when the Seminoles hit just 4 of 20 shots. They finished at 34.3 percent (24 of 70).

Notre Dame: The Fighting Irish, who were averaging almost 15 turnovers a game, made just four in the first half. The Irish's transition game, lacking in the loss at Miami, also got going and Notre Dame had 13 assists on its 20 first-half field goals. They finished with 25 assists on 36 field goals. But defense still concerns McGraw.

"We could have put them away really early," she said. "We kept giving them 3s. They average three 3s a game and they had nine. We've got to do better."

Freshman Abby Prohaska had nearly 23 minutes on the floor and scored six points with five rebounds, two assists and two steals. But McGraw believes her 5-foot-10 guard can do more when she gives Ogunbowale, Young and Marina Mabrey rest.

"I think she can bring more, I do," McGraw said after also giving freshman point guard Jordan Nixon extended minutes early in the game.

Sophomore Mikayla Vaughn, who hyperextended the knee on which she had ACL surgery last season in a 90-50 victory over Georgia Tech on Feb. 3, left the game with 2:57 to go in the first half after going down hard battling for a rebound. McGraw said she suffered a concussion and probably would miss the next game.