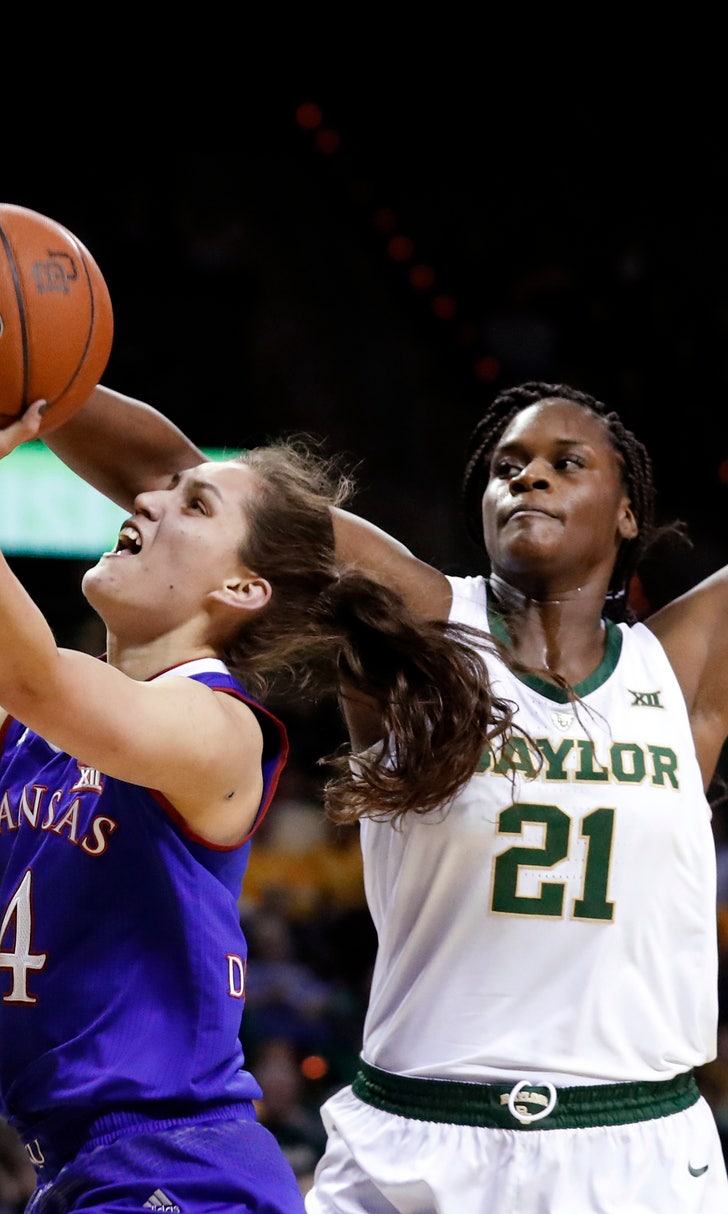 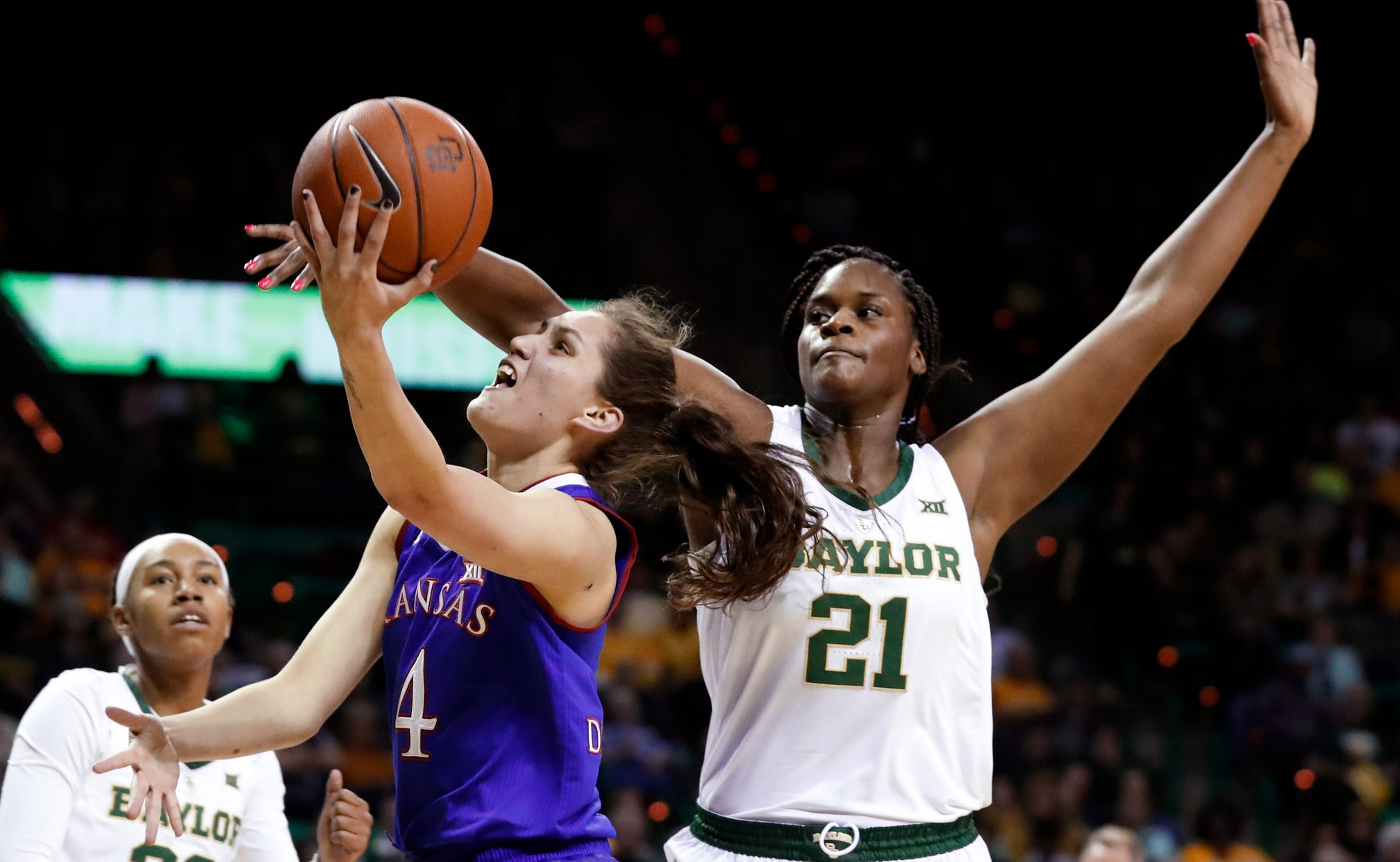 previous story
How to win as a caddie and get paid well on PodcastOne
next story
A new country, big excitement in Mexico over Tiger Woods

WACO, Texas (AP) — This kind of celebration never gets old for No. 1 Baylor, even with bigger goals the Lady Bears want to reach.

Confetti and balloons fell from the rafters, "We Are The Champions" blared from the speakers and nine Big 12 championship trophies were lined up on a table at center court in a display of the dominance by the Lady Bears after an 80-40 win over Kansas on Wednesday night.

Kalani Brown reached career milestones of 2,000 points and 1,000 rebounds, and joined her teammates in cutting down the nets as the Lady Bears (24-1, 14-0 Big 12) clinched at least a share of their ninth consecutive Big 12 regular-season championship.

"We're not done. This is one of our goals," Baylor coach Kim Mulkey said. "We've got a goal to win the tournament in the Big 12. We've got a goal to go to the Final Four and fight for a national championship. This is just one, but it's always going to be one we celebrate because it's not easy to win one. ... That's just the blessing of having great players."

The Lady Bears won their 10th Big 12 regular season title overall in Mulkey's 19th seasons. They need to win only one of their four remaining conference games to win the title outright.

Brown finished with 11 points and 14 rebounds to run her career totals to 2,000 and 1,012, respectively. Juicy Landrum had a game-high 20 points that included five 3-pointers. Lauren Cox had 11 points, 12 rebounds and six assists while Chloe Jackson scored 10 points.

Brown had only four points going into the fourth quarter, but her teammates made it a point to get the ball to her so she could reach another milestone in the game. That came on a pass from Cox with just under four minutes left.

"They made it hard for me pretty much all game," Brown said. "So coach was like, you've got to get out and run and try to get something in transition, get there before they get their defense set. So, we were doing that, and Lauren was able to find me on that back end for those last two points. Kudos to Kansas."

The Lady Bears led 13-9 after the first quarter — the only time they scored less in the first 10 minutes was when they had eight at then-No. 11 Stanford on Dec. 15 in their only loss. After Lyons scored for Kansas in the opening minute of the second quarter, Baylor took control with a 16-0 run and led 37-19 at halftime.

"They missed some early. We were able to rebound it, but we couldn't get any baskets," Kansas coach Brandon Schneider said. "I credit Baylor's defense for that. They were really juiced up, really read our shooters off the line and obviously when they do that, they have great paint protection and shot-blocking."

KANSAS: The Jayhawks had ample opportunities early to take the lead. They were attacking the basket and getting open point-blank looks, but they weren't falling. They ended up 3-of-13 shooting in the first quarter. The Jayhawks also struggles at the free throw line (7 of 15) and had only four assists against 16 turnovers that turned into 21 Baylor points.

BAYLOR: The Lady Bears won their 37th consecutive Big 12 game, and have also won 35 home games in a row overall. ... They dominated on the boards 48-26, which helped contribute to a 15-0 advantage on second-chance points. Baylor finished strong, outscoring the Jayhawks 24-6 in the fourth quarter, with all freshmen on the floor for the closing minutes.

Brown is the sixth player in Baylor history with 2,000 points and 1,000 rebounds. Brittney Griner, Nina Davis and Sophia Young also accomplished the feat under Mulkey. Suzie Snider Eppers and Maggie Davis-Stinnett did it previously.

Kansas will play the second of back-to-back road games Saturday at Oklahoma State.

The Lady Bears play their next two games against teams that could mathematically still tie for the Big 12 title. They are at No. 20 Iowa State on Saturday, and home Monday against No. 19 Texas. West Virginia is also tied with Iowa State and Texas for second place in the Big 12 at 10-4 in league play.