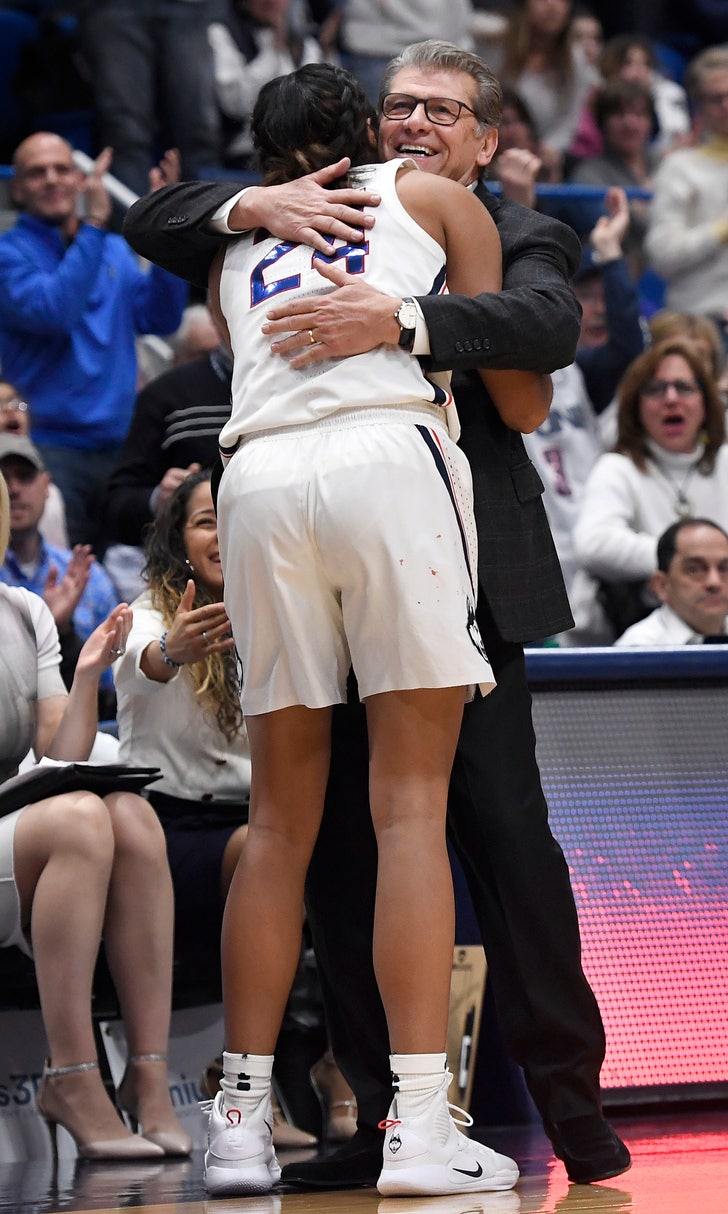 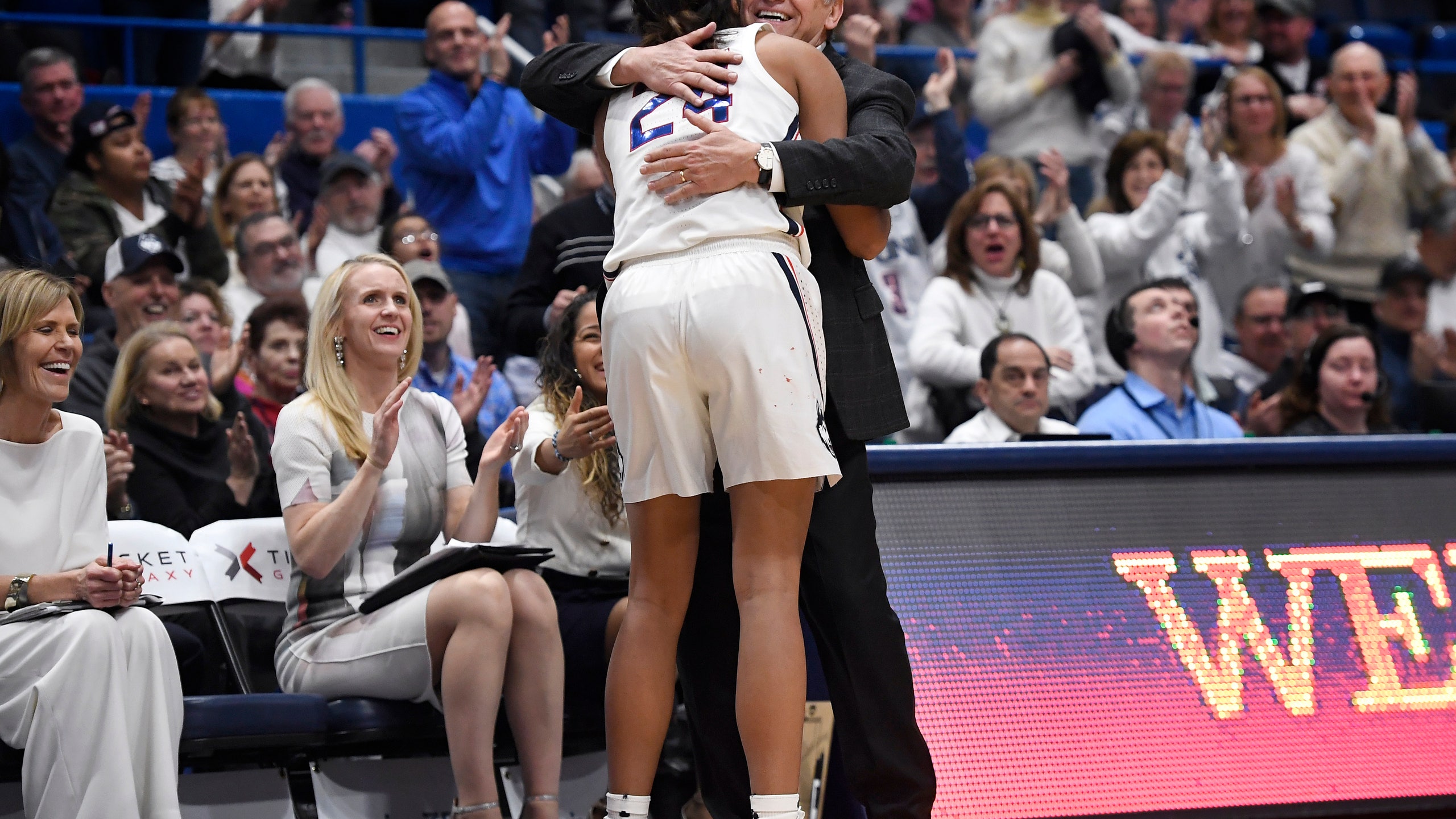 HARTFORD, Conn. (AP) — Napheesa Collier and UConn used a strong second half to turn their final nonconference game into a rout.

Katie Lou Samuelson added 29 points for the Huskies (22-2), who blew open a close game with a huge third quarter in which they outscored the Gamecocks 29-12. Samuelson scored 14 points in the game-changing period. Collier added eight as the two seniors continued to carry UConn.

"We've had quarters where we played really, really well. Shot the ball well or played well in general," UConn coach Geno Auriemma said. "Given the quality of the team we're playing against, that was pretty good. We did a lot of really great things in that quarter on both ends. ... That pretty much ended the game right there."

Collier has now scored 20 or more points in eight straight games and has three double-doubles in her past four contests. She left the game with just over a minute left and got a big hug from Auriemma.

"I said this the other night, that every coach talks about their players as if they're the best players ever," Auriemma said. "I don't get caught up in that stuff. (But) there can't be anywhere a player that's playing better or does more for their team than Napheesa Collier does. That's not possible. I haven't seen every game, every week in every conference. There's something about her that's rare — you just don't see it. You don't see it at all."

Samuelson has broken out of a three-game shooting slump at the end of January. She's made 25 of 39 shots from the field the in past three games.

The victory was the 89th straight at home for the Huskies. That's the second-longest winning streak in NCAA history, trailing only UConn's school-record 99-game run. The Huskies' last regular-season loss at the XL Center, where the game was played Monday night, was on Feb. 18, 2013, against No. 1 Baylor. They lost to Notre Dame there in the Big East tournament final that same season.

South Carolina got off to a hot start, hitting 10 of its first 12 shots to build a 22-12 lead. UConn closed within 27-23 at the end of the quarter. The 27 points equaled the most points the Huskies had given up in a period this year, matching the total DePaul had in the third quarter of a 36-point loss by the Blue Demons.

UConn continued its 16-5 burst to start the second quarter and took its first lead of the game on Crystal Dangerfield's 3-pointer. The teams traded the lead for the rest of the half with the Huskies ahead 44-43 at the break. Collier had 15 points and eight rebounds at the half.

"You play a good first half and then you need to play a second half that will equally match that and we didn't do that," South Carolina coach Dawn Staley said. "There's some good we will take from it. We need to put four quarters together."

UConn is now 8-0 against South Carolina since the series began in 2007.

The Huskies didn't go to the bench until 1:48 into the third quarter, when Olivia Nelson-Ododa came in for Megan Walker. This was the Huskies' third game in six days.

The NCAA selection committee unveiled the potential top 16 seeds for the women's tournament on Monday night. If the season was over, the Huskies would be a No. 2 seed in the Albany Region. South Carolina would be a four-seed in Greensboro.

South Carolina had averaged 43 points in the paint over its previous four games. The Gamecocks were outscored 50-30 in the paint on Monday.

"They junked it up and played a lot of zone. They were concerned about our speed and ability to drive the paint," Staley said. "We got to do a better job of getting our post players the ball. ... You give up 50 points in the paint, you're not going to win very many."

WNBA players Sue Bird (UConn) and A'ja Wilson (South Carolina) provided commentary for an alternate "smack talk" broadcast to the game on ESPN3. During the third quarter, Bird went over to the UConn huddle to listen in on Auriemma's comments with the Huskies up by 10.

"It's nice to be able to be biased," said a smiling Wilson, who is broadcasting games on the SEC Network this winter. "It's fun to be able to purely cheer for and root for South Carolina."

Bird got the last laugh, though.

UConn: At UCF on Sunday.