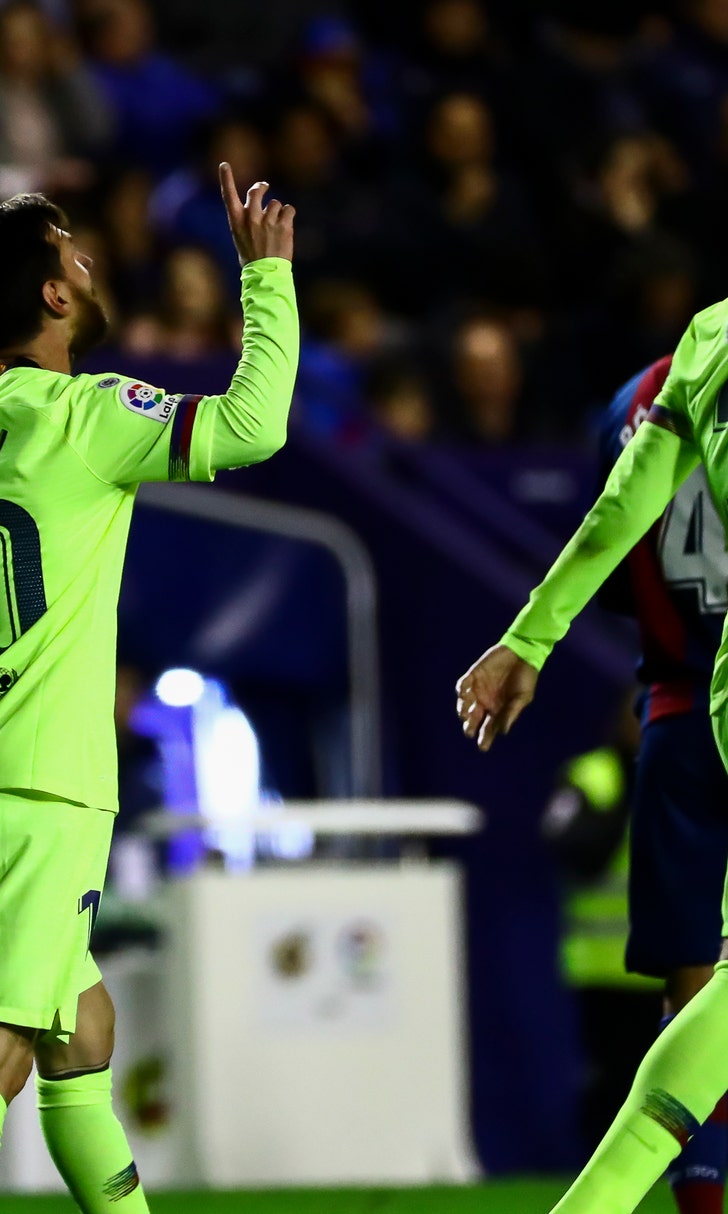 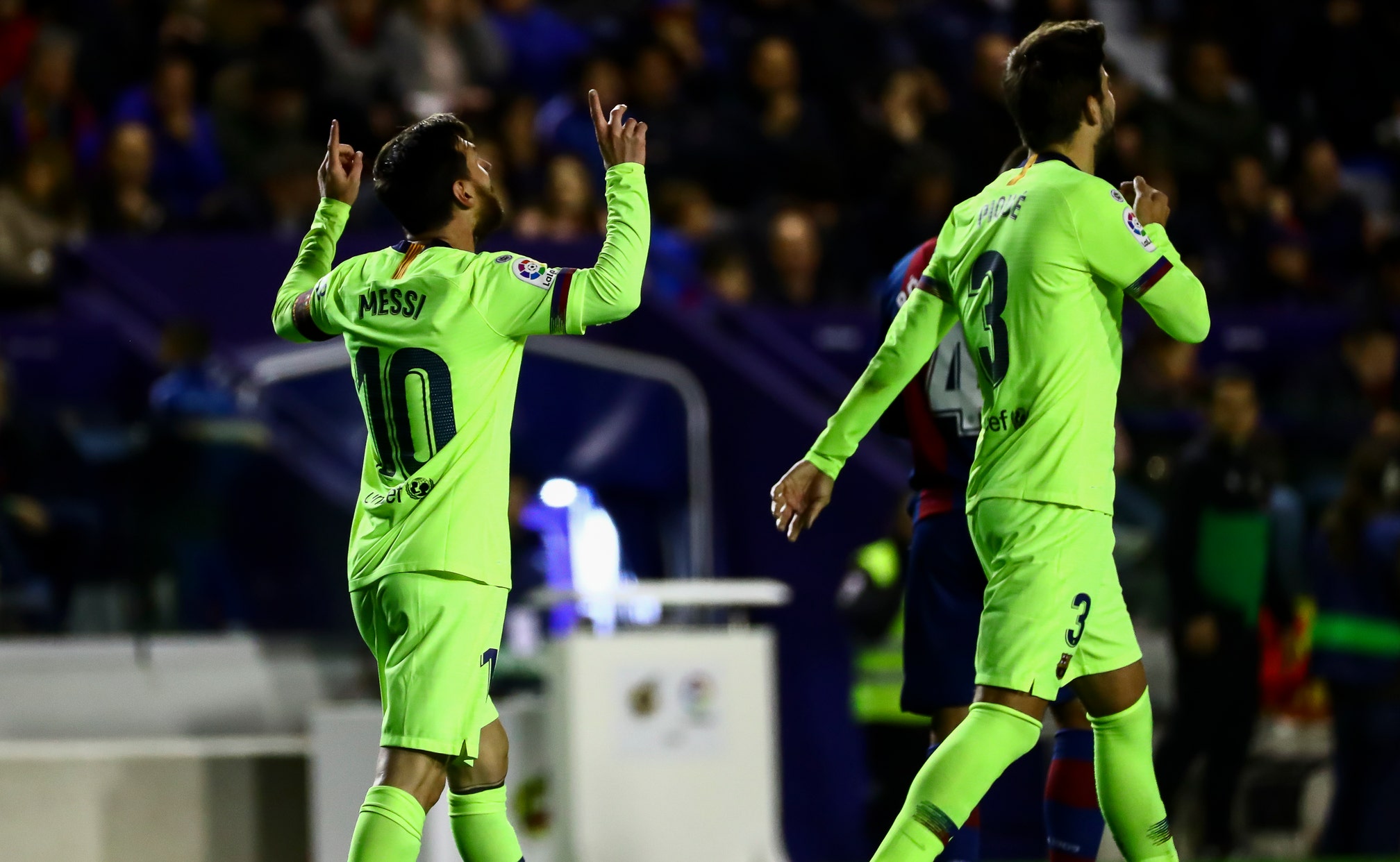 BARCELONA, Spain (AP) — Lionel Messi hit the 50-goal mark for club and country in 2018 after scoring his 43rd career hat trick for Barcelona on Sunday.

Messi's brilliance powered Barcelona to a 5-0 victory at Levante and kept the defending champions three points ahead of Sevilla and Atletico Madrid in the Spanish league.

It also avenged Barcelona's only loss in the league last season when Levante stunned the visitors 5-4 in the penultimate round in a match that Messi missed.

"We had circled this match on the calendar after what happened here last season," said Barcelona coach Ernesto Valverde. "We had trouble at the beginning, as we expected, but once we got in front we were able to little by little play our game."

Messi netted his 18th, 19th and 20th goals in all competitions this season after setting up Luis Suarez to get Barcelona rolling against the flow of play at the Ciutat de Valencia Stadium.

Already trailing 4-0, Levante lost Erick Cabaco in the 76th minute with a direct red card for cutting down Ousmane Dembele.

Messi then set up Gerard Pique to complete the demolition.

It was Messi's second treble of the season, adding to his three goals against PSV Eindhoven in the Champions League in September. He has a total of 31 hat tricks in the Spanish league, and this is the eighth time in nine years he has scored at least 50 goals in a calendar year. Messi has 46 goals for Barcelona and four goals for Argentina in 2018.

The Argentina forward leads the Spanish league with 14 goals through 16 rounds. He scored two goals — both from free kicks — in last round's 4-0 win at Espanyol.

Levante had a promising start, pressuring Barcelona up the pitch and creating scoring chances that included Emmanuel Boateng's shot that hit the crossbar in the 33rd.

But Messi put Barcelona in charge two minutes later when he dribbled across the box to draw in three defenders before flicking the ball back for the unmarked Suarez to stab home.

Messi made it 2-0 just before halftime when Sergio Busquets played him clear on a solo break after intercepting a pass in midfield. Messi got his second goal in the 47th when Suarez recovered the ball and passed wide to Jordi Alba. Suarez then used a dummy run to let Alba's pass run through for Messi to drive in a left-footed shot.

Suarez also cued Messi's third goal in the 60th when he dribbled through the legs of Cabaco before crossing for Arturo Vidal, who then found Messi all alone to tap the ball in.

Second-placed Sevilla beat Girona 2-0 to extend its winning streak to 10 straight home matches across all competitions, including six straight in the league.

"It's fantastic. Beyond the numbers, which are excellent, I can sense that my team always wants more and has connected with our fans," Sevilla coach Pablo Machin said. "This connection gives us a bonus and makes us super competitive."

In a match that pitted Machin against the team he coached last season, Ever Banega and Pablo Sarabia broke down Girona's defense with a pair of second-half goals.

Real Betis came from behind for a 3-1 win at Espanyol to go fifth — four points behind fourth-placed Real Madrid.

Last-placed Huesca got a stoppage-time goal from Samuele Longo to salvage a 2-2 draw with 10-man Villarreal.

Lionel Messi
share story
those were the latest stories
Want to see more?
View All Stories
Fox Sports™ and © 2020 Fox Media LLC and Fox Sports Interactive Media, LLC. All rights reserved. Use of this website (including any and all parts and components) constitutes your acceptance of these Terms of Use and Updated Privacy Policy. Advertising Choices. Do Not Sell my Personal Info