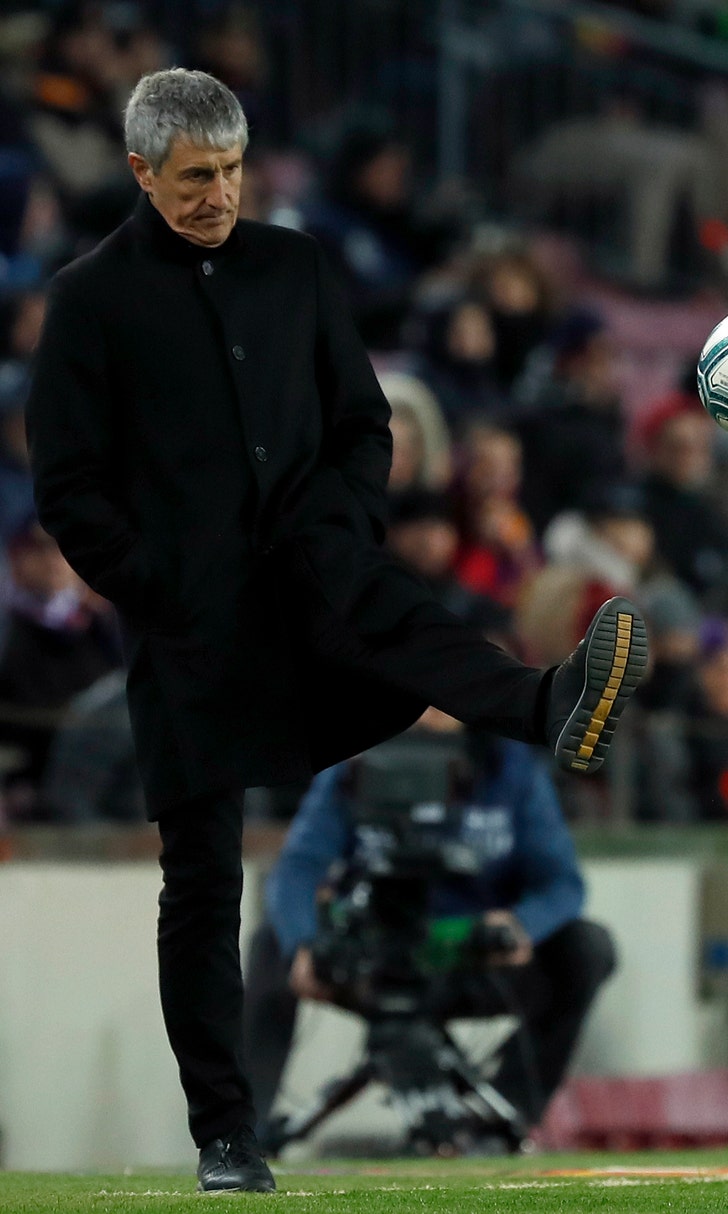 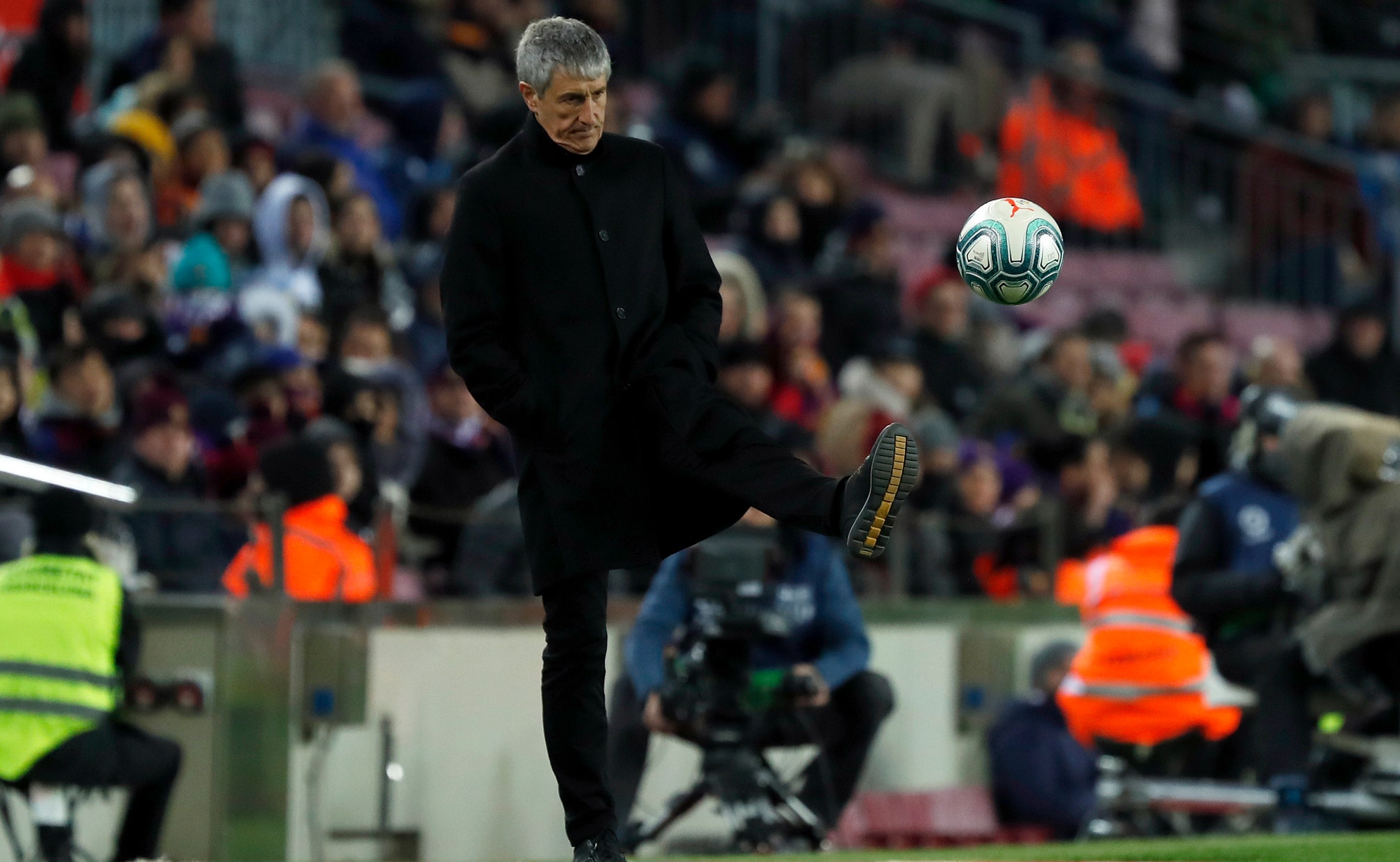 BARCELONA, Spain (AP) — Coach Quique Setién only needed one match to leave his mark on Barcelona.

The defending champion’s level of 82% ball possession came close to reaching the all-time Spanish league record of 84% established by Pep Guardiola’s Barcelona in 2011, according to the club. The team’s 1,005 attempted passes smashed its previous season high of 788 passes against Real Betis.

One thing, however, remained the same after the coaching switch: Barcelona turned to Lionel Messi to find the winning goal. The club’s all-time leading scorer scored in the 76th minute after Granada had lost a defender for picking up a second yellow card for fouling Messi.

“You feel much better having Messi because he has been deciding these types of matches for more than a decade,” Setién said.

The 61-year-old Spaniard divided fans at his previous two jobs with Las Palmas and Real Betis. He started well at both with supporters enjoying his insistence on imitating Barcelona's style. But many fans then grew tired of seeing his teams dominate the ball while scoring few goals and proving brittle on defense.

Now with Messi and his talented teammates under his command, Setién’s has passed the first test at Camp Nou. His new side only conceded one shot on goal that, fortunately for Setién, hit the post minutes before Messi decided the game.

Setién did not touch Barcelona’s 4-3-3 formation or make any big changes in his first starting 11 compared to Valverde. Ansu Fati, the teenager who was discovered by Valverde, started for the injured Luis Suárez. Arturo Vidal, a key player for Valverde, took the place of the suspended Frenkie de Jong. Despite his reputation of not being a great passer, Vidal set up Messi’s goal with back-heel pass.

Setién insisted on the importance of his players pressing quickly to recover the ball after losing it. They responded and worked several incredibly long possessions, especially in the first half, that ended in attractive chances in the box.

“The fact that we made so many passes? The only thing I need is to have control,” he said. “We we had talked about being brave and going forward to recover the ball in their territory and that helped us to created danger after recovering the ball."

The 20-year-old Puig had earned his debut in 2018 from Valverde, but at the start of this season Valverde sent him back to the reserve team. Setién’s first move was to call Puig back up to train with the first squad.

Puig proved key to the victory when he stole the ball near Granada’s area. That led to the attack finished by Messi.

“(Puig) was very good,” Setién said. “He showed patience and he read the match well.”

While Barcelona and Real Madrid won, most of their potential challengers lost ground just past the midpoint of the season.

Fourth-place Sevilla fell 2-1 at Madrid; sixth-place Real Sociedad lost 3-0 at Real Betis; Valencia fell into seventh place after being shocked 4-1 at lowly Mallorca this round.

Atlético Madrid, which finished the past two seasons as runners-up to champion Barcelona, had one of its poorest performances of the campaign in a 2-0 loss at Eibar. The defeat came following a loss in the Spanish Super Cup final in a penalty shootout to Madrid. Before the pair of losses, it had won three in a row in the league and had beaten Barcelona in the Super Cup semifinals— Valverde's last match.

The defeat at Eibar left it eight points adrift in third place behind Barcelona and Madrid. Barcelona leads Madrid on goal difference.

Last-place Espanyol’s chances of staying in the topflight have been revived by a new coach and a new striker.

Espanyol has taken four points from the two league matches manager with Abelardo Fernández in charge. It drew with Barcelona 2-2 two weeks ago and won 2-1 at Villarreal on Sunday for its first win since Oct. 27.

Shopping for a scorer in the winter transfer market, Espanyol reportedly paid Benfica a club-record 20 million euros ($22 million) for Raúl de Tomás, who had joined Benfica during the summer.

De Tomás has made an immediate impact, scoring in his debut against a third-tier team in the Copa del Rey before taking the winner at Villarreal.

“We have been working on boosting our morale for the past two weeks, on recovering our self-confidence,” Abelardo said. “My players hadn’t forgotten how to play, as they showed (Sunday). You have to live the present instead of thinking about what can happen in two or three weeks. You have to play each match like a final.”