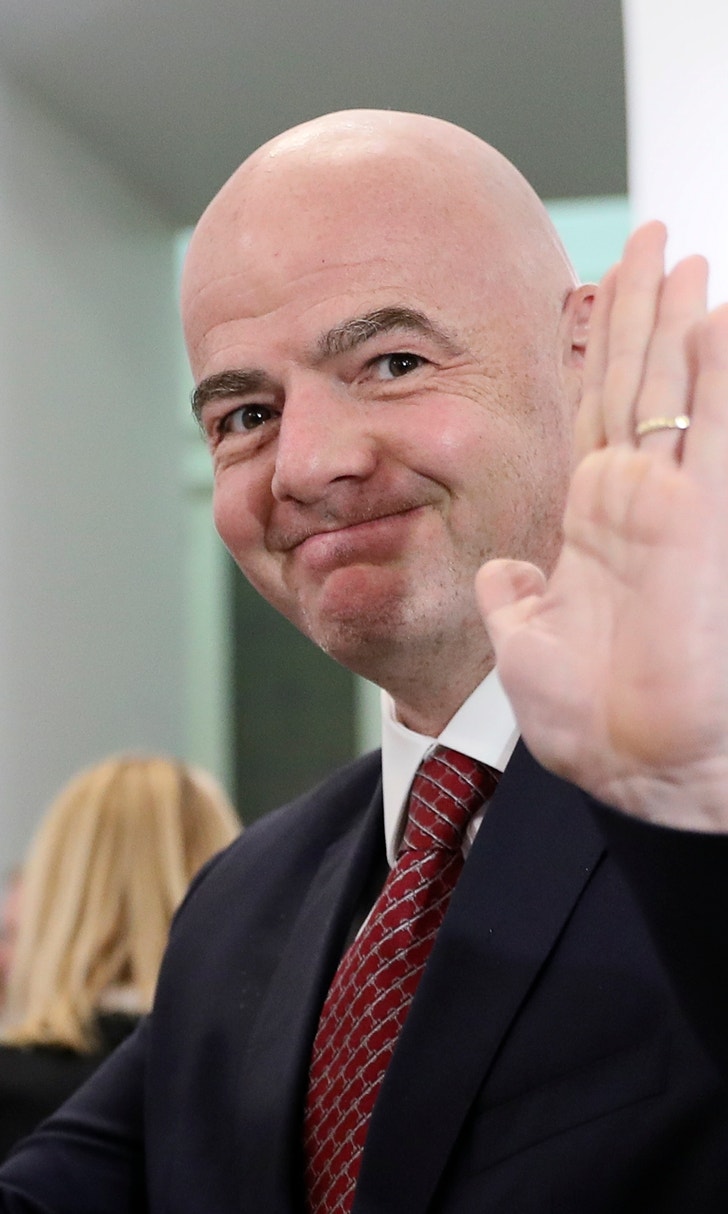 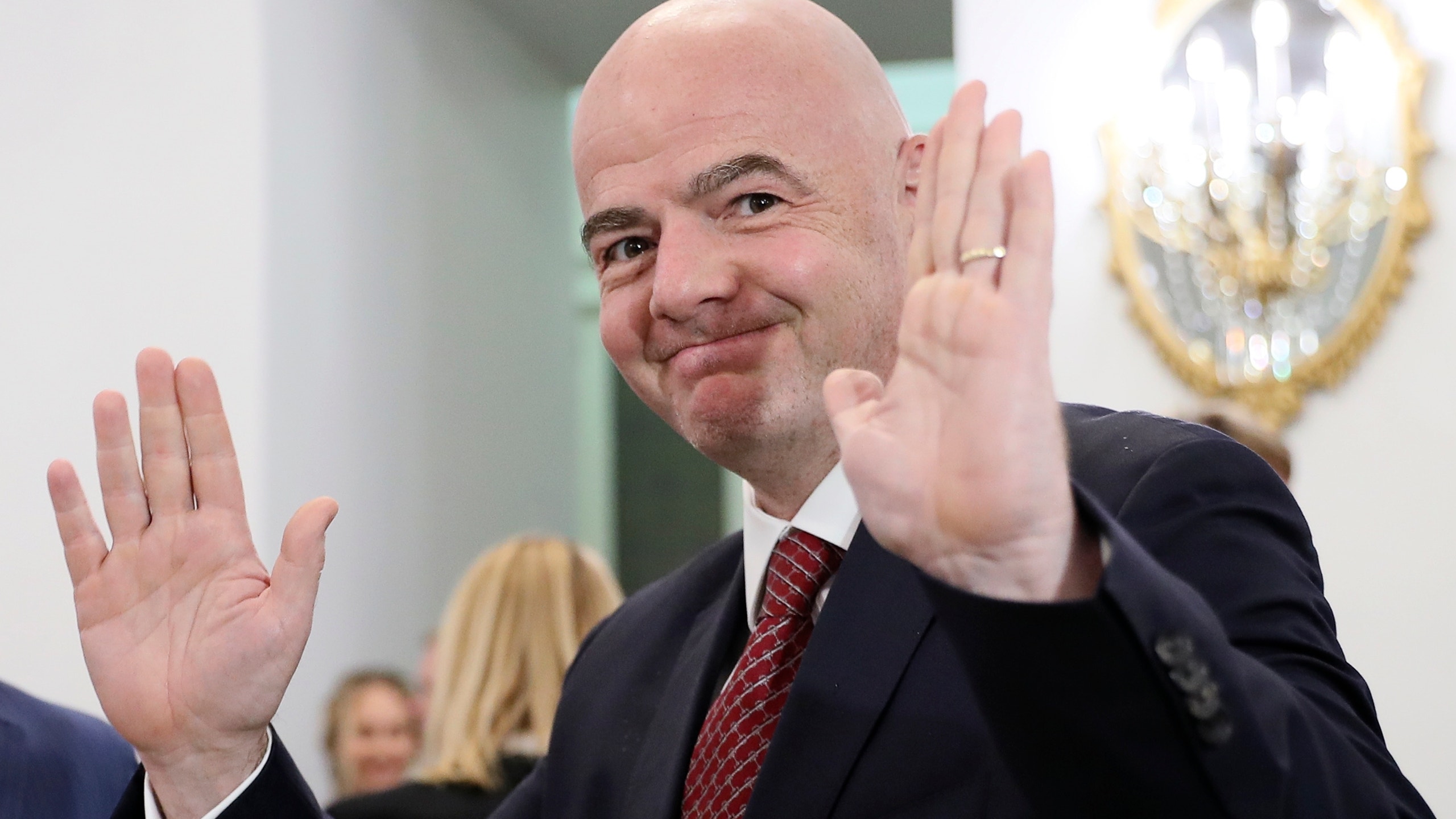 Out of turmoil, Infantino set to lead FIFA into calmer era

PARIS (AP) — After years of turmoil for FIFA, Gianni Infantino this week will get a fresh four-year presidential term to lead world soccer in relative calm.

The 49-year-old Swiss-Italian lawyer's rise still rankles with those who thought the FIFA presidency was their destiny. Sepp Blatter and Michel Platini — both banned by the FIFA ethics committee — are making headline-grabbing interventions ahead of Infantino's unopposed re-election in Paris on Wednesday.

Still, it will be the man once best known for hosting Champions League draw ceremonies who takes FIFA toward a 2022 World Cup in Qatar, preparing the 2026 edition in North America, and picking the 2030 host.

Here's a look at Infantino's first three years in office, and the next four:

Blatter, FIFA's then-president, was forced out. His long-time protege, Platini, also had to leave as president of European soccer body UEFA. Infantino, who was Platini's general secretary at UEFA, stepped up as Europe's candidate.

A generation of soccer leaders in North and South America were swept from power by the U.S. Department of Justice's case.

In the Infantino era, soccer's other four continental governing bodies each lost elected FIFA Council members amid allegations of corruption or financial misjudgments.

Infantino was also investigated, and soon cleared, in 2016 by the FIFA ethics committee for his use of private jets. The investigators and judges who ran that case, from Germany, Guam and Switzerland, were gone within a year.

Another independent official left abruptly weeks after finding that the Russian sports minister was too conflicted to retain his FIFA Council seat.

Infantino built a reputation in 15 years at UEFA as a smart lawyer, effective operator, and hard worker making equal demands on himself and staff.

His single-minded drive could defy advice to be more cautious. That was shown in upending the FIFA ethics committee, which got more independence and power after FIFA's previous corruption crisis in 2010 and '11.

In a gift to his critics, Infantino ousted his chief prosecutor in the same week Donald Trump fired James Comey as FBI Director in May 2017. Infantino even spoke of "fake news" then to denounce some reports.

Infantino created a small circle of trusted aides at FIFA, while easing out Blatter-era management. Current and former staffers have said he was more distant than Blatter's warmer, familial style.

A FIFA-appointed panel set up in 2015 to recommend post-corruption changes included Infantino as a member. The slate of reforms approved on the day he was elected included empowering the secretary general, with the president taking an "ambassador" role.

Russia was a key ally of Infantino's first term. It hosted a 2018 World Cup treated warily by many fans and sponsors, and boycotted by lawmakers in some countries.

The tournament delivered a warmer welcome, more thrilling games, and greater profits for FIFA than expected. Infantino told Putin at the Kremlin he felt "like a child in a toy shop."

Infantino's judgment was less sure in two projects widely seen as favoring the Saudis.

Even he acknowledged it would be hard persuading Qatar to accept expanding its 32-team World Cup to 48, and share games with Gulf neighbors.

FIFA kept pushing what seemed a proxy dispute in the ongoing boycott of Qatar led by the Saudis and United Arab Emirates. It continued despite global outrage at the murder last October of Saudi journalist Jamal Khashoggi. The 48-team plan was dropped last month.

Infantino also angered many in Europe by trying to agree to a secretive $25 billion deal with investors he would not identify to part-own a bigger Club World Cup and a new competition for national teams.

A project many thought involved Saudi money faltered, and widened a rift between Infantino and UEFA President Aleksander Ceferin for much of 2018.

Still, there will be a 48-team World Cup in 2026 — a big early win for Infantino's presidency — and it will be played in North America as he wanted.

The June 2018 vote by member federations to pick the United States-Canada-Mexico bid over Morocco can underwrite Infantino's future financial plans for FIFA.

Infantino's election-day pledge to FIFA voters that "it is not the money of the FIFA president. It's your money," helped win a close-run contest.

FIFA topped $6.4 billion revenue during 2015-18, despite new American and western European sponsors staying away. FIFA has $2.75 billion in reserves.

It means the 211 member federations are each due $6 million of audited funding over the next four years. More is paid for specific projects.

FIFA aims to invest $500 million in women's soccer by 2022, and new competitions are expected.

For the men, a 24-team Club World Cup kicks off in June 2021. Bidding for the 2030 World Cup should include a multi-nation South American bid, a British-Irish joint bid, and China.

Some say FIFA and the International Olympic Committee are still racing to win a Nobel Peace Prize. If that is FIFA's goal, it helps having a fiercely ambitious president who believes the world's favorite sport has the power to transform society.