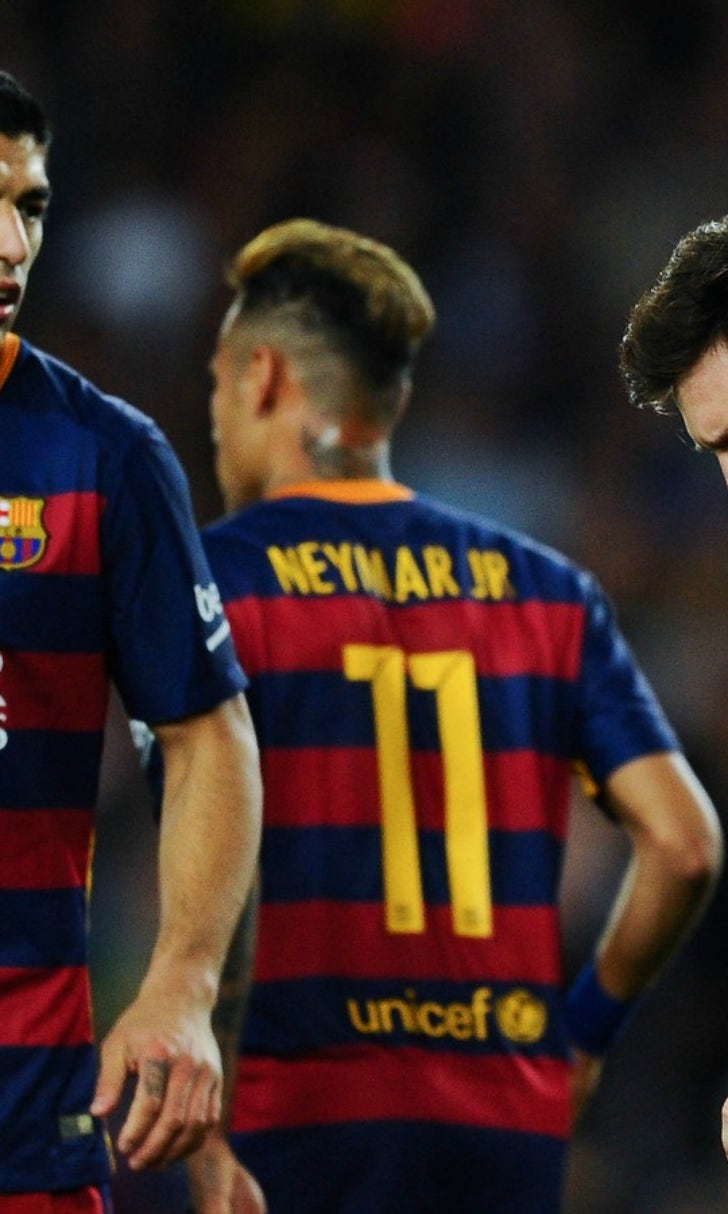 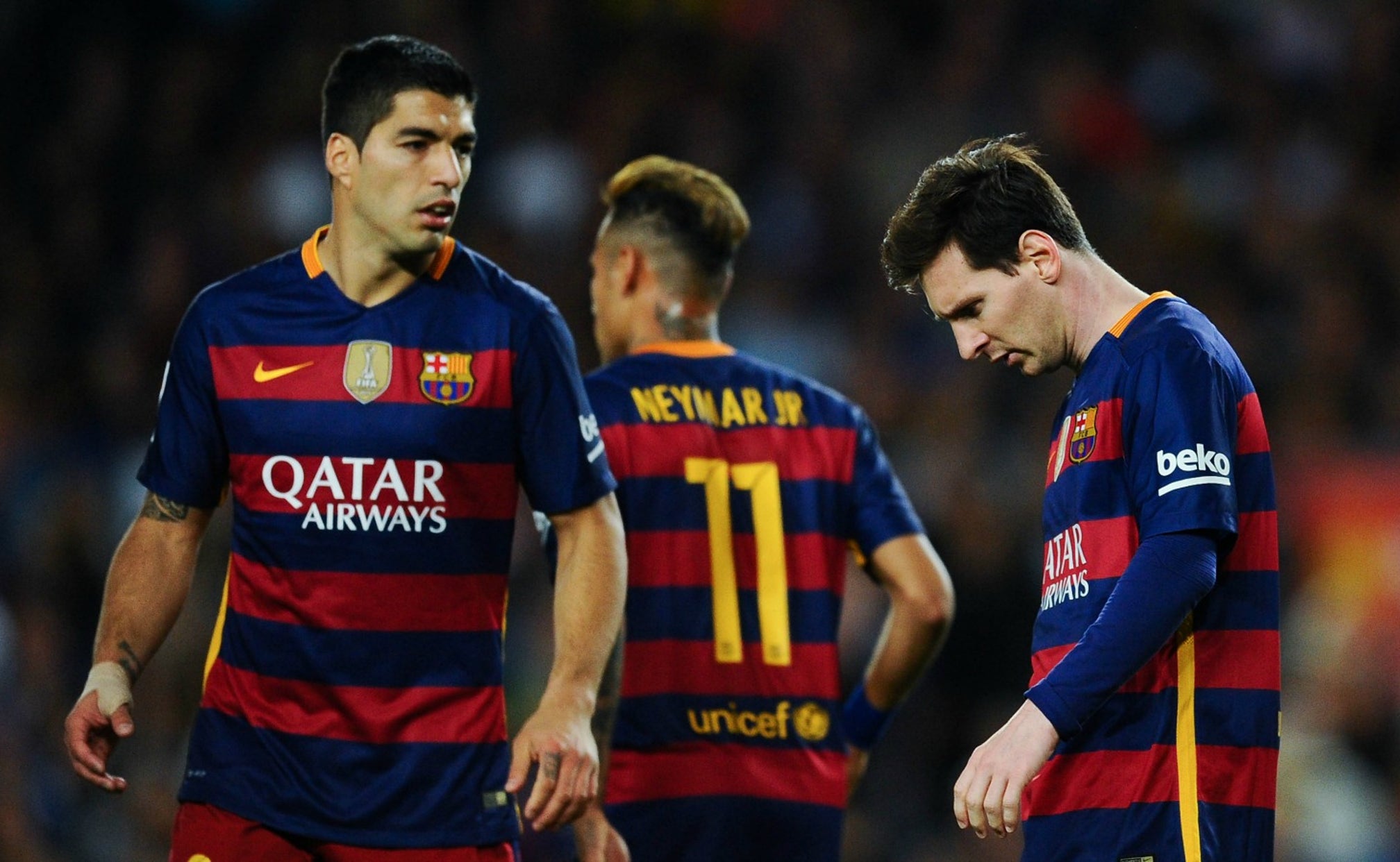 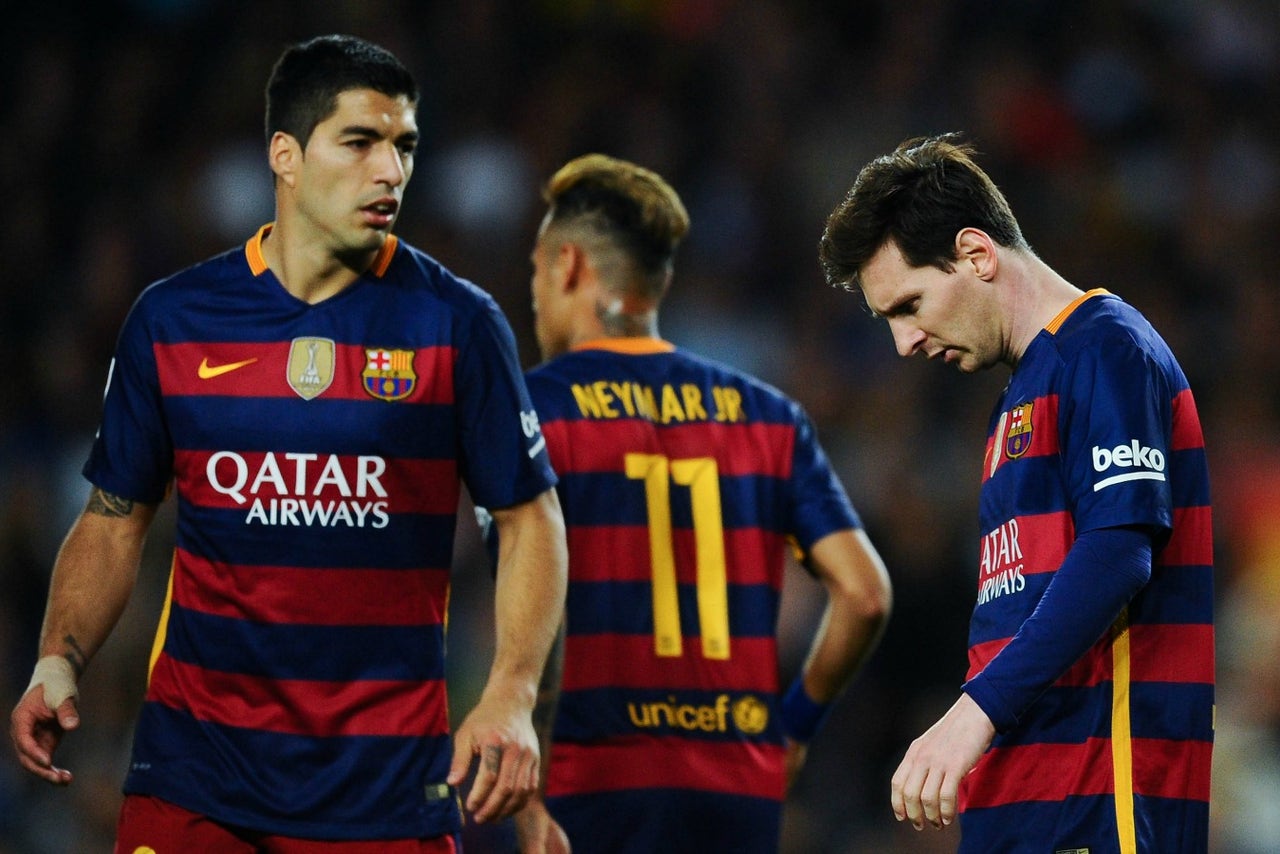 The fight for the Spanish league title is tighter than ever thanks to a surprise collapse by Barcelona atop the standings.

The once-unbeatable Barcelona fell to Valencia 2-1 at the Camp Nou on Sunday, losing its third straight game to allow Atletico Madrid to draw level on points with five rounds to go.

Atletico erased Barcelona's lead by beating Granada 3-0 earlier Sunday. Real Madrid is only one point behind after winning 5-1 at last-place Getafe on Saturday.

Atletico was trailing by nine points three rounds ago, and Real Madrid was 12 points back four games ago.

At the time, Barcelona was cruising toward a repeat of the Champions League, Spanish league and Copa del Rey treble. But Luis Enrique's squad has won only one of its last six games, being eliminated by Atletico in the Champions League quarterfinals and seeing its league lead collapse. Its 39-game unbeaten streak ended with a home loss to Real Madrid earlier this month.

"We have to remain strong," Barcelona coach Luis Enrique said. "We need to win the last five games and I know we can do it."

"It will be hard," Atletico coach Diego Simeone said. "We only have one option in our next games, which is to win, win and win."

Valencia opened the scoring after Barcelona midfielder Ivan Rakitic deflected a cross into his own net in the 26th minute. Midfielder Dani Parejo then provided a perfect pass for Santi Mina's precise shot into the far corner in first-half injury time.

Lionel Messi scored his 500th career goal in the 63rd to end a five-game scoring slump that was his worst with Barcelona in five years. He completed a cross by Jordi Alba to keep his team's hopes alive, but it was not able to capitalize on its chances of equalizing. "We created a lot of chances but we were unlucky," Luis Enrique said. "We lost three points that we deserved to win. It's part of football."

Valencia had several opportunities to put the game away in counterattacks, but the best scoring chance of the match was squandered by Barcelona defender Gerard Pique in the 89th. He had only the goalkeeper to beat but missed from close range.

Valencia goalkeeper Diego Alves made a few great saves to help secure the win, including a spectacular one after a Rakitic shot from inside the area in the 75th.

"Luck was on Valencia's side," Rakitic said. "We had our chances, but the ball just didn't go in."

Barcelona had also squandered a lot of chances in the 1-0 loss at Real Sociedad in the previous round. Its last win was a 3-1 victory against Arsenal in the round of 16 of the Champions League on March 16.

It was the second win in a row for Valencia after four straight losses, moving the club further away from the relegation zone. It has 40 points from 33 games and is in 12th place. It was only the team's third game under new coach Pako Ayestaran, who replaced the fired Gary Neville.

Atletico easily defeated Granada at the Vicente Calderon Stadium with goals by Jorge "Koke" Resurreccion in the 15th, Fernando Torres in the 59th and Angel Correa in the 83rd.

The team's seventh win in eight league games put it alongside Barcelona on 76 points.

Sunday's loss kept Granada with 30 points from 33 games, only one point clear of the relegation zone.