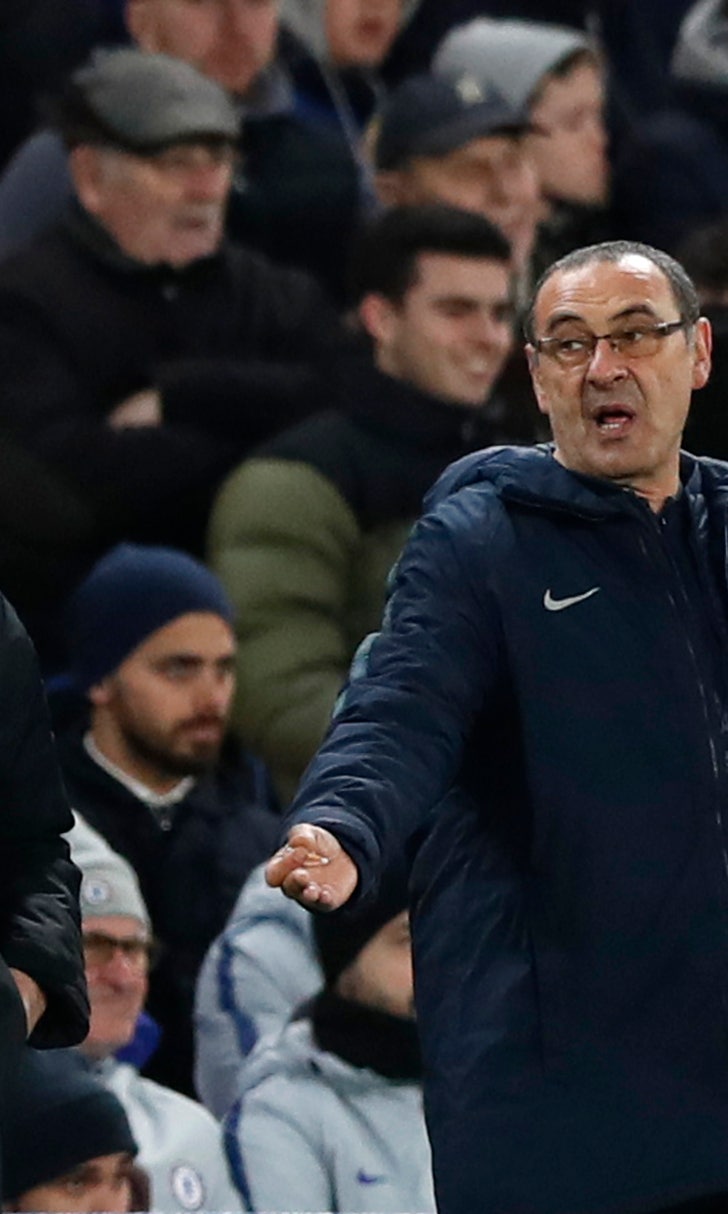 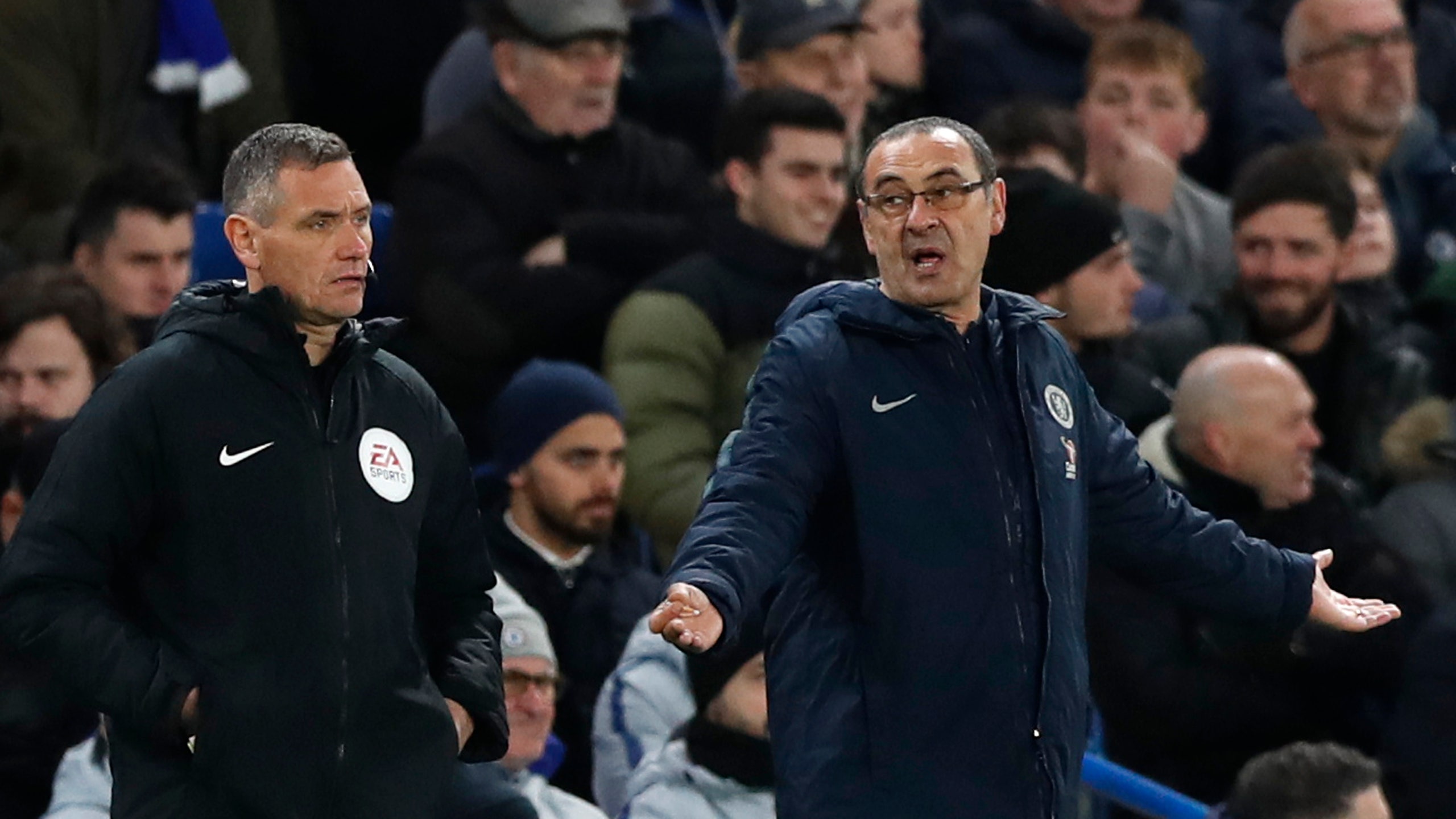 Maurizio Sarri isolated at Chelsea after fans turn on him

LONDON (AP) — The volley of abusive chants from Chelsea supporters were aimed in a different direction this time. Toward the sideline at Stamford Bridge.

Players were spared on Monday, there was no need to dig out the "rats" banners from 2015, and supporters seem just fine with Eden Hazard and Co.

Typically loyal to their managers — and there have been a dozen alone this century — many Chelsea fans instead seem to be done with Maurizio Sarri even before the end of his first season in charge.

Losing in the FA Cup to Manchester United was the breaking point, even if it wasn't a complete rout. The cup competition is low on Chelsea's priority list — winning it wasn't enough to save Antonio Conte last season — but the end of that quest only adds to the despair.

In this rebuilding season, winning the Premier League — as Conte did in 2017 before finishing fifth the next year — couldn't have been expected given the strength of Manchester City. But neither was a slide to sixth in the standings and a scramble for one of the four Champions League places.

"I am worried about the results," Sarri said after Monday's 2-0 loss to United. "Not about the fans."

But the mutinous atmosphere won't be lost on owner Roman Abramovich, who has spent the year watching from afar because the British government stymied the Russian billionaire's visa renewal. That offshoot of the London-Moscow diplomatic dispute feeds the uncertainty at Chelsea.

Without fan backing, the 60-year-old Sarri — without a trophy in his career — looks isolated and exposed. The much-vaunted "Sarriball" is now part of the vocabulary of vitriol in chants — with added expletive.

It's reminiscent of Rafa Benitez's interim title being used against the caretaker coach five years ago. Even in the darkest days of Jose Mourinho's second spell in charge — as Benitez's successor — it was the players who were blamed. Cesc Fabregas, Diego Costa and Hazard were branded "rats."

Hazard is the only one of the trio still on the team — not that he gives the impression of wanting to stick around. The Belgium winger has avoided committing his future to Chelsea and has openly stoked talk of a transfer to Real Madrid.

Much like Madrid, Chelsea oscillates from glory to gloom under a conveyor belt of managers.

There's also a regular flow of trophies, albeit only potentially secondary ones this season. Chelsea can still win the League Cup by beating Manchester City on Sunday and remains in contention in the Europa League.

While Madrid dropped to sixth place at one point this season in the Spanish league, the team hauled itself back up to third. Chelsea, which has won the Premier League five times since 2005, hasn't been as successful. In the last month, the London club has lost to Arsenal, Manchester City — a 6-0 humiliation — and even to an ostensibly inferior Bournemouth.

For the stubborn Sarri, there seems to be no alternative to the "Sarriball" pressing tactics that helped his Napoli team push Juventus hard for the Italian title. Just a repetitive sequence of decisions.

— a reluctance to trust young players like Callum Hudson-Odoi.

— a determination to shoehorn Jorginho into defensive midfield, forcing N'Golo Kante out of position in favor of the recruit from Napoli.

— persisting with a back four after a three-man defense proved so effective for Conte.

— substitutions repeated in like-for-like changes. If it's not Ross Barkley replacing Mateo Kovacic in central midfield, then they are interchanging the other way — 20 times this season. Pedro Rodriguez and Willian have swapped places 14 times.

For all the problems, it's easy to forget that it took Chelsea three months to lose a game as Sarri started on an 18-match unbeaten run. Losing to Tottenham in November now seems to be a significant turning point.

Before that 13th game, Chelsea was in third place and had scored 27 and conceded only eight times in the league. Since then, Chelsea had netted 18 and conceded 21.

The cups will now define Sarri's future, and it's one down and two to go this week.

Chelsea holds a 2-1 lead over Malmo in the Europa League heading into the second leg of the round of 32 on Thursday before the League Cup final against City at Wembley Stadium on Sunday.

"The most important thing now is to stay calm, train really hard and recover our best football and our best feeling," Pedro said, "because if not, we are in trouble."

More specifically, Sarri will be.