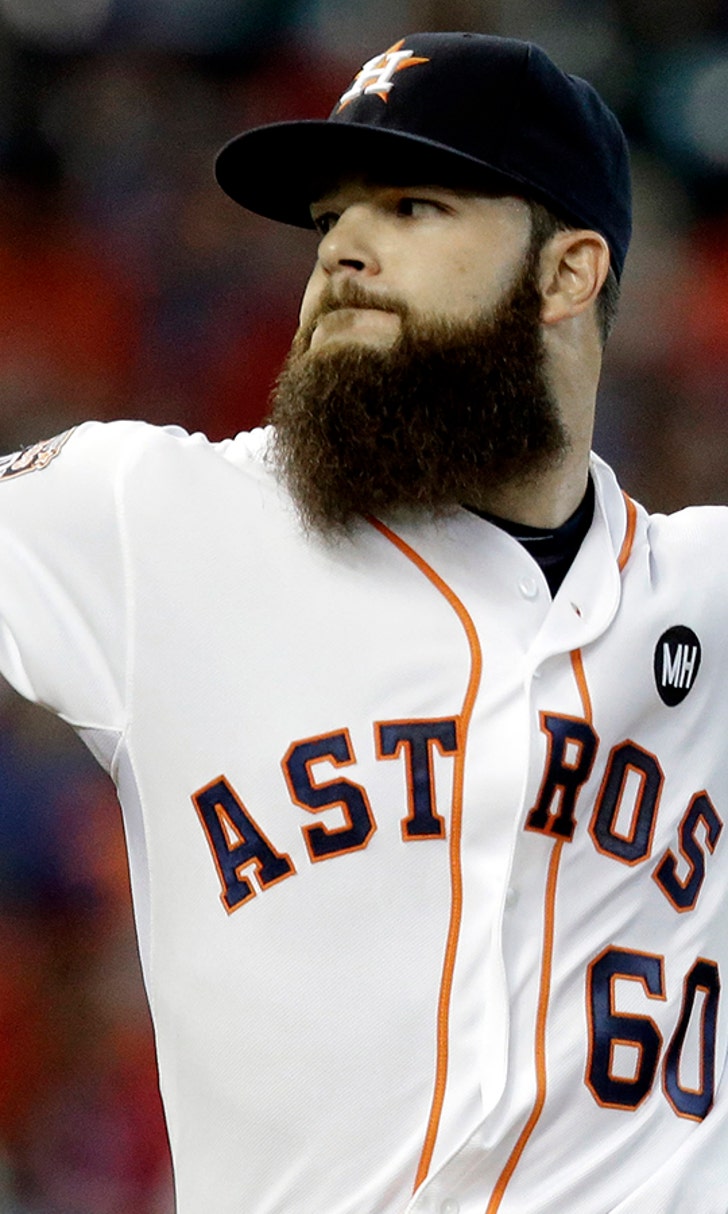 An awkward ending to their latest defeat only elevated the early frustration level of the Houston Astros.

They'll look to regroup and avoid a fourth consecutive loss Saturday night against the Milwaukee Brewers at Miller Park.

After being blanked for eight innings, Houston (1-3) scored four times in the ninth and looked for more with one out in the ninth Friday when Colby Rasmus was called for interference on the "Chase Utley rule," at second base. The result was a game-ending double play and a 6-4 defeat.

Rasmus was called for not trying to stay on the bag, part of the requirement under baseball's new rule governing slides on potential double plays.

"My interpretation is that it's a shame," a fuming Astros manager A.J. Hinch said. "The game ends on a play that the rule isn't intended to protect."

Ace Dallas Keuchel made his displeasure known via Twitter.

"Are we even playing baseball anymore??? Unbelievable," he tweeted.

The incident exacerbated the early troubles for the Astros, who have allowed 33 runs, own an 8.73 ERA and already struck out 42 times at the plate.

After Keuchel allowed two runs in seven innings of Tuesday's 5-3 win at Yankee Stadium, Houston's next three starters have a 13.50 ERA. Doug Fister hopes to halt that trend when he makes his Astros debut and first start since Aug. 3 -- after which he pitched out of Washington's bullpen.

Scooter Gennett had a hit in his only at-bat against Fister, and is 5 for 13 through four games.

"I feel good," said Gennett, who homered for the second time this week. "For the most part I am swinging at good pitches."

Ex-Astro Chris Carter homered for the second time in as many games in his first meeting against his former club since signing with the Brewers in the offseason.

Milwaukee's Wily Peralta hopes to fare better in this contest after he gave up four earned runs and six hits in four innings of a 12-3 loss to San Francisco on Monday.

"They just put some good at-bats against him," Milwaukee manager Craig Counsell said of Peralta, who has a 10.66 ERA while losing his last three starts.

The right-hander has never faced Houston.

Peralta's former Brewers teammate Carlos Gomez recorded his second straight 2-for-4 contest in his first game since Milwaukee traded him to Houston in July. Gomez said before Friday's game that he would like to retire as a member of the Brewers, with whom he spent five-plus seasons.

"The best of the memories, the best of my career, is in the Brewers uniform," he said.

World Series Top Plays: Game 2
It's Game 2 of the Fall Classic. Here are the top plays from Wednesday night's Dodgers-Rays matchup, as they happen!
3 hours ago

World Series Watch Party: Game 2
Hang out with Nick Swisher, Tino Martinez, Rick Ankiel and Ben Verlander as they react to the action and answer your questions!
4 hours ago

Special Delivery
Clayton Kershaw's postseason reputation may precede him, but the Dodgers star is setting the stage to flip the script.
8 hours ago

Best Of Game 1 Watch Party
Relive Game 1 of the World Series with Nick Swisher, Tino Martinez, Rick Ankiel and Ben Verlander.
1 day ago
those were the latest stories
Want to see more?
View All Stories
Fox Sports™ and © 2020 Fox Media LLC and Fox Sports Interactive Media, LLC. All rights reserved. Use of this website (including any and all parts and components) constitutes your acceptance of these Terms of Use and Updated Privacy Policy. Advertising Choices. Do Not Sell my Personal Info