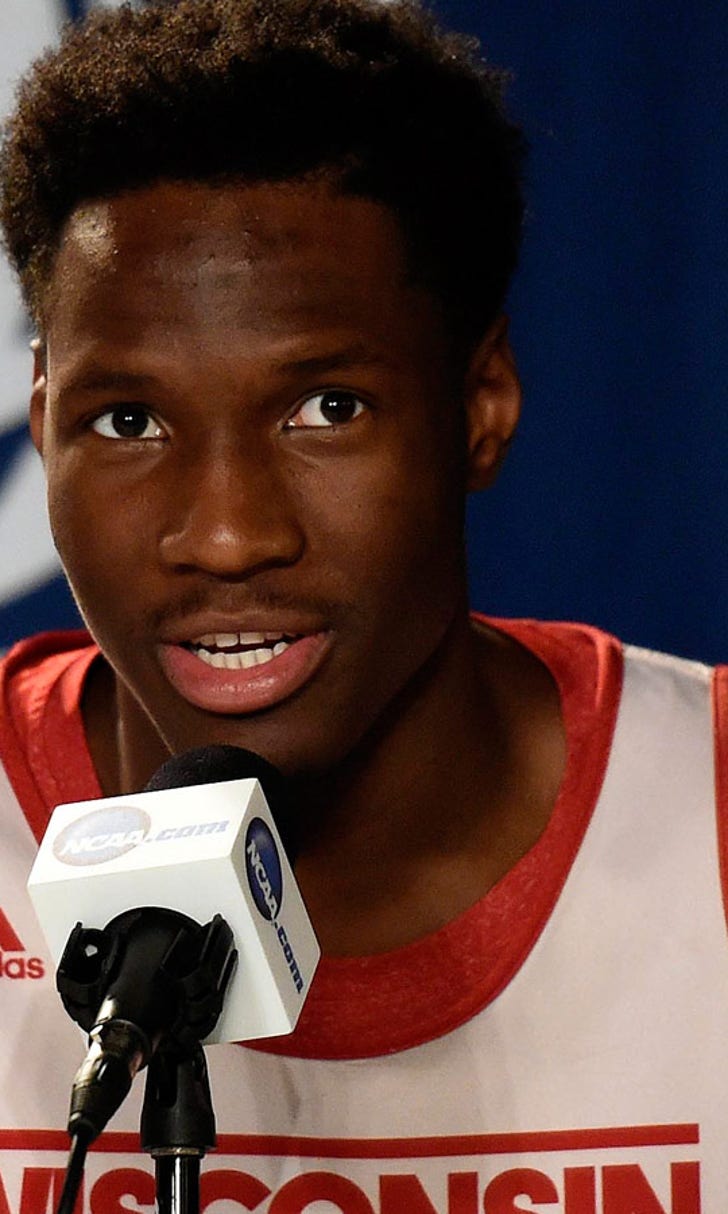 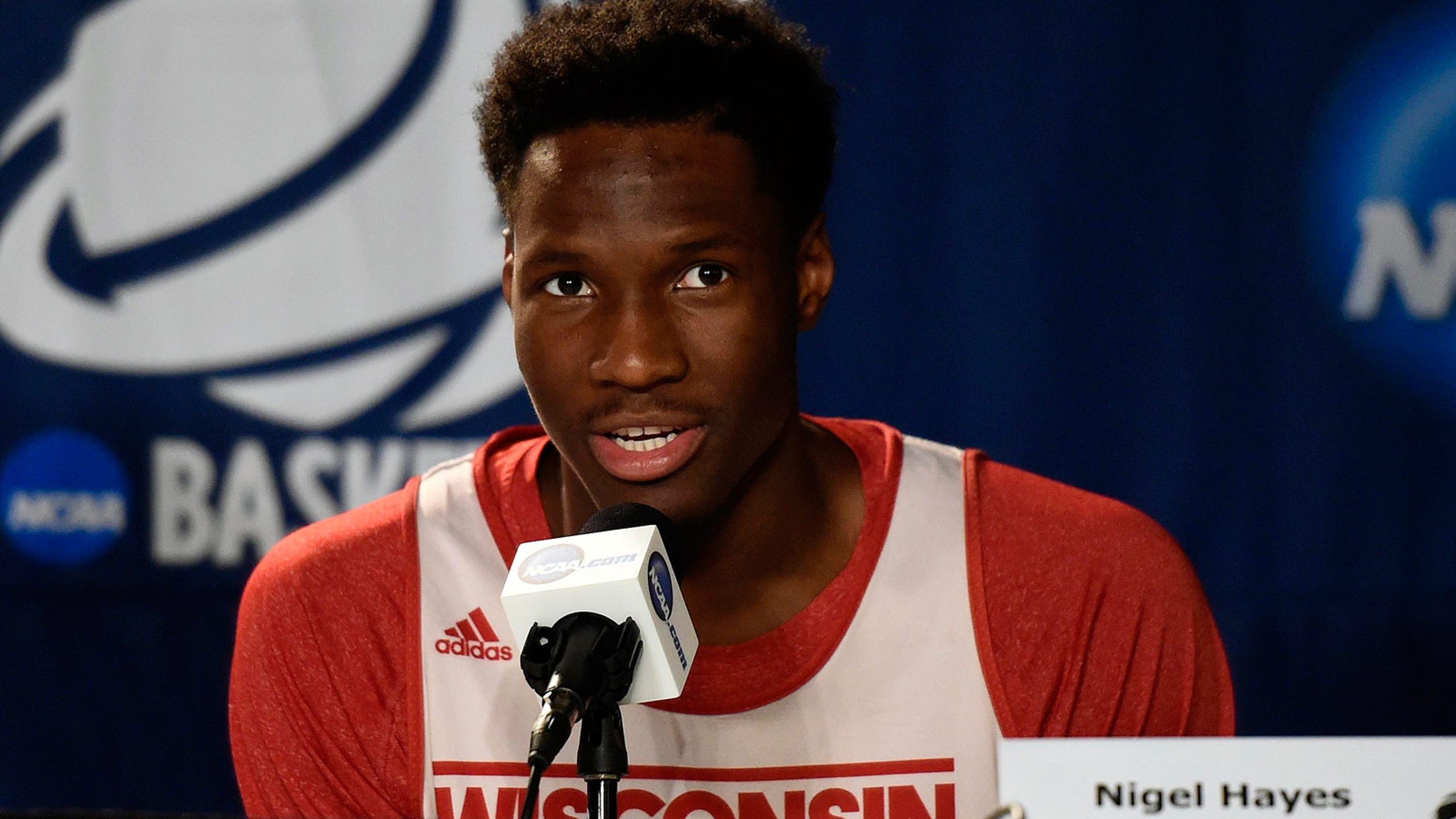 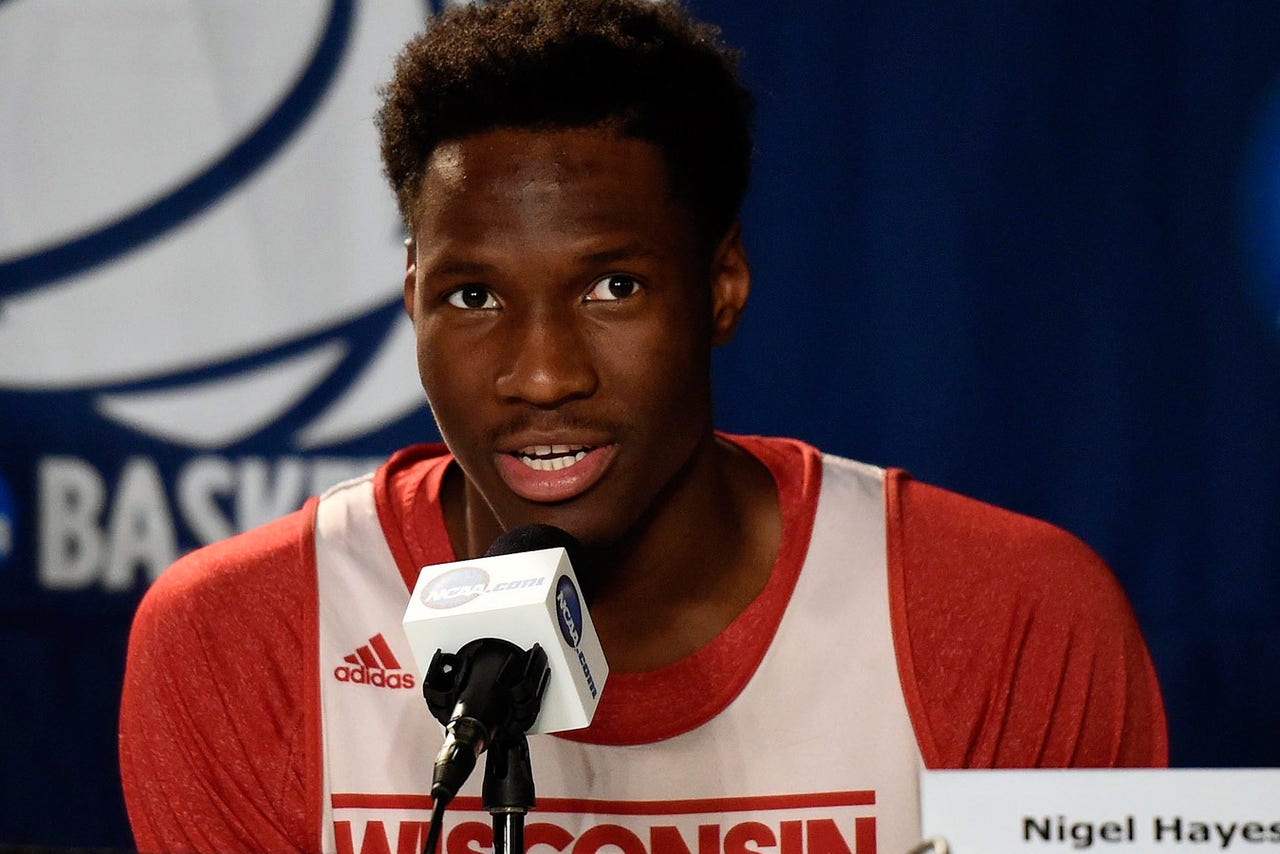 The field of stenography's biggest fan is the new headlining act on the Wisconsin Badgers.

"I try to stay away from words now in these interviews because that seems to get me in trouble like it did last year," the talkative Hayes deadpanned during Wisconsin media day.

Hayes became a viral sensation during the Badgers' run to the national title game for his interest in NCAA Tournament stenographers.

But Hayes is no longer just the wingman, like he was on Wisconsin's back-to-back Final Four teams.

Frank Kaminsky and Sam Dekker are gone to the NBA. Trusted senior guards Josh Gasser and Traevon Jackson are out of eligibility, as is top frontcourt backup Duje Dukan.

This year's squad will be led by a pair of juniors who know nothing except making it to a Final Four: Hayes and quick point guard Bronson Koenig.

"My role and Bronson's role, suddenly we just have to take more shots," Hayes said. "We'll definitely be looked upon to teach the young guys and the inexperienced guys what to do to best prepare them to play."

There are huge voids to fill. The Badgers lost about two-thirds of the scoring and rebounding from last year's star-studded squad.

Coach Bo Ryan said that he would like to see Hayes get to the foul line more and be more assertive. Just as important is that Hayes will be counted on to set a standard for the younger Badgers.

"He needs to make sure that what he does is scrutinized even more now," Ryan said. "His leadership skills will be on display in every drill he does in practice."

So far, so good for Hayes. Last year, Hayes pointed to outside shooting and ball-handling as skills he targeted for improvement.

Hayes said he is working on everything going into this season. And he still has an impressive arsenal of entertaining press conference answers.

When asked about whether he took offense to predictions of lower expectations among outsiders, Hayes answered:

"The bumblebee isn't supposed to be able to fly because it's aerodynamically unfit," Hayes said. "But the bumblebee doesn't care. He flies anyway. So, here we are."

Should be entertaining on and off the court for Wisconsin as long as Hayes is around.

Other notes and things to watch this season:

TAKING THE SHOT: Hayes has taken his share of big shots, though he goes into this year for the first time firmly as the Badgers' top scoring option. Hayes realizes defenses will counter accordingly.

"Yeah I think I'll be ready for it," Hayes said. "Still got to watch what you said they're going to do to me, do to Frank" Kaminsky.

STEPPING UP: Two other juniors who came off the bench last season seem likely to begin the year as starters. Forward Vitto Brown could secure one of the starting frontcourt spots with Hayes, while Zak Showalter could join Koenig in the backcourt. Showalter in particular had spurts last season during which he provided the offense with energy, though he'll need to improve defensively.

REPLACING FRANK: The Wooden Award winner for the game's top player, Kaminsky did everything for the team the last two seasons. Six-foot-9 redshirt freshman Ethan Happ impressed the coaching staff with the way he took on Kaminsky in practice last year. Now, Happ hopes he can use those lessons learned against Kaminsky as a key member of the Badgers' rotation this season.

NEW FACES: Happ is a grizzled veteran compared to a couple other players joining the Badgers. Among the true freshmen, 6-foot-8 forward Charlie Thomas and 6-foot-5 guard Khalil Iverson have the body frames that appear to be well-suited for playing time in the rough-and-tumble Big Ten.

BO'S FUTURE: Ryan is trying to put lingering questions about retirement plans to rest for now by insisting that the focus be on preparations for this season. But the "Will he-or-won't he coach beyond this season" drama likely disappear, especially in high-profile games, at least until the coach and school have a more definitive answer.