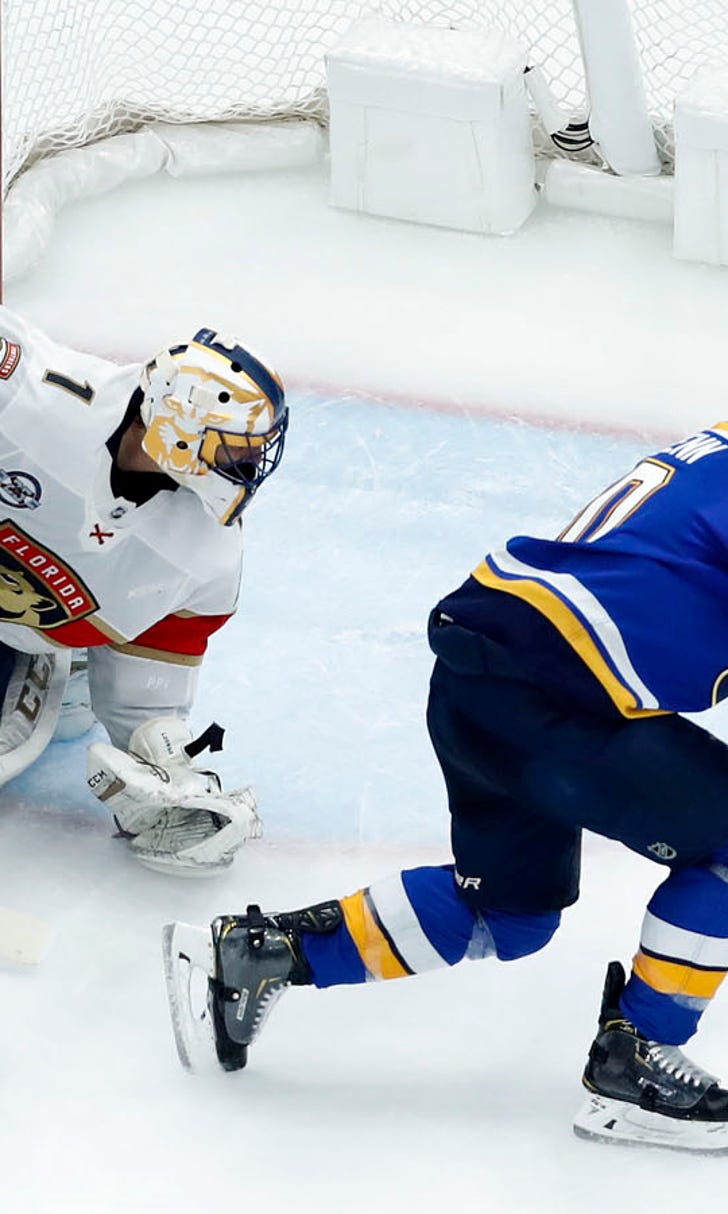 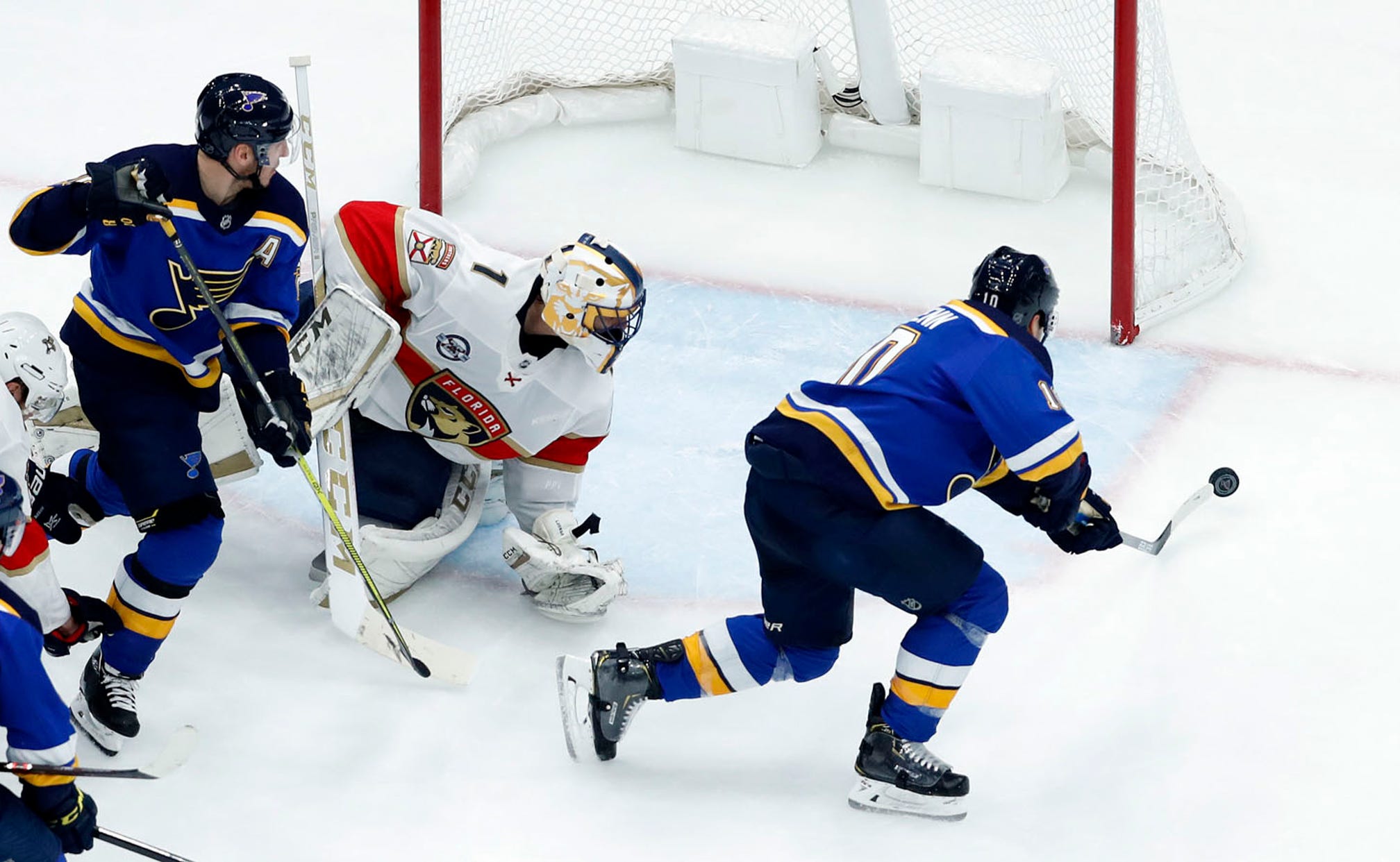 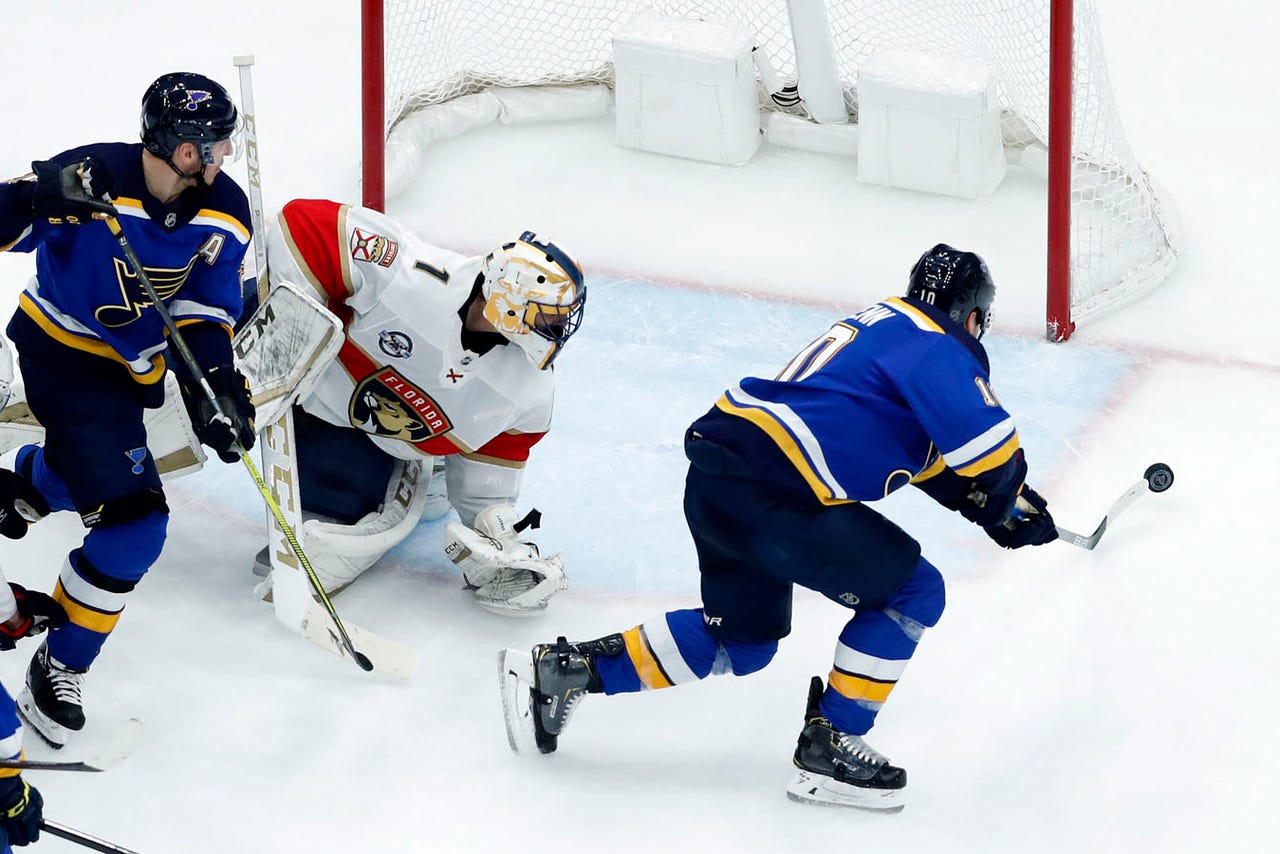 ST. LOUIS — Brayden Schenn knows he has to dig in around the net and make things happen.

Schenn's tiebreaking goal came off a rebound as he backhanded it past Panthers goalie Roberto Luongo with 3:55 remaining.

"I've got to more of that," Schenn said. "I've got to go to the net more. That's where the pucks are always ending up, whether it's a tip or a rebound. If you go to the net, good things are going to happen. I got to do a better job of doing that."

Florida coach Bob Boughner believed there should've been a penalty on Schenn before the goal.

"I thought it was a cross-check," Boughner said. "The guy that cross-checks is the guy that gets the puck and it's in the back of our net, so that's how it all played out."

David Perron had two goals and Ivan Barbashev also scored for St. Louis, which had lost three of four and eight of its last 11 games. Jake Allen stopped 22 shots to improve to 2-4-0 in his career against Florida.

Evgenii Dadonov, MacKenzie Weegar and Mike Hoffman scored for the Panthers, who have lost four of five. Luongo finished with 29 saves.

Barbashev got the Blues on the scoreboard at 1:28 as he scored from the slot to tie the score 1-1.

Perron put St. Louis ahead just 11 seconds later as Jaden Schwartz intercepted Mike Matheson's pass and sent it to Perron, who scored on a one-timer from the right circle.

Perron's second goal, also on an assist by Schwartz, came when the puck deflected in off Florida's Frank Vatrano at 11:12 to make it 3-1.

The Panthers tied it with two goals 1:28 apart. Just 34 seconds after Perron put the Blues up by two, Weegar got his first of the season from inside the right circle. Hoffman tied it from in front with 6:46 remaining.

The Blues took a timeout and regrouped.

"It's always important never to panic," Perron said. "Always. We've done that too much this year."

The Panthers went ahead 1-0 when Dadonov scored with 4 1/2 minutes left in the first period. It was Dadonov's fifth goal in his last seven games.

St. Louis had a goal waved off at the 5:37 mark of the first. From outside the blue line, Robert Bortuzzo fired in a pass to go around the net. The puck hit referee Tim Peel, who was in the corner. The puck bounced toward the goal and slipped in past Luongo's skate. However, it was ruled no goal because it hit the official. Referee Furman South made the ruling according to Rule 78.5 under disallowed goals.

Peel left the ice. He returned at the beginning of the second period.

"I didn't know the rule obviously," Bortuzzo said. "I threw my hands in the air. I felt bad. Anytime you hit a ref, it's tough on them. I apologized to him in the second period. He's a good guy. Maybe I'll buy him a dinner sometime."

David Perron after the #stlblues' win over the #FlaPanthers: "I think we played a pretty good game the whole night, and to get two goals like that early in the third — that was huge for our club." pic.twitter.com/RdtR82Dhic

NOTES: Schwartz returned for the Blues after missing the last 11 games. He was out after getting hit in the hand by a shot from teammate Vladimir Tarasenko and breaking a finger on Nov. 16 at Las Vegas. ... St. Louis got its first win this season when trailing after two periods. St. Louis was 0-12-2 previously. ... The Blues called up G Jordan Binnington from San Antonio of the AHL. Backup Chad Johnson was claimed off waivers by Anaheim. Binnington is 8-4-0 this season in San Antonio and has appeared previously in just one NHL game, which came during the 2015-16 season. ... Blues D Chris Butler played in his 400th career game on Tuesday. ... This was the first of two meetings between the Blues and Panthers this season. The Blues, who dropped both matchups last season, improved to 9-4-0 in the last 13 meetings with the Panthers. ... Florida lost for just the second time when leading after two periods. The Panthers are 7-2-3 coming in. ... Florida F Nick Bjugstad remained in South Florida to nurse an upper-body injury and is considered day-to-day. ... This was the Panthers' first road game since Nov. 23 at Carolina. The Panthers are coming off an eight-game homestand. ... Panthers D Alexander Petrovic played after being a healthy scratch for the previous three games.

Panthers: At Minnesota on Thursday night.