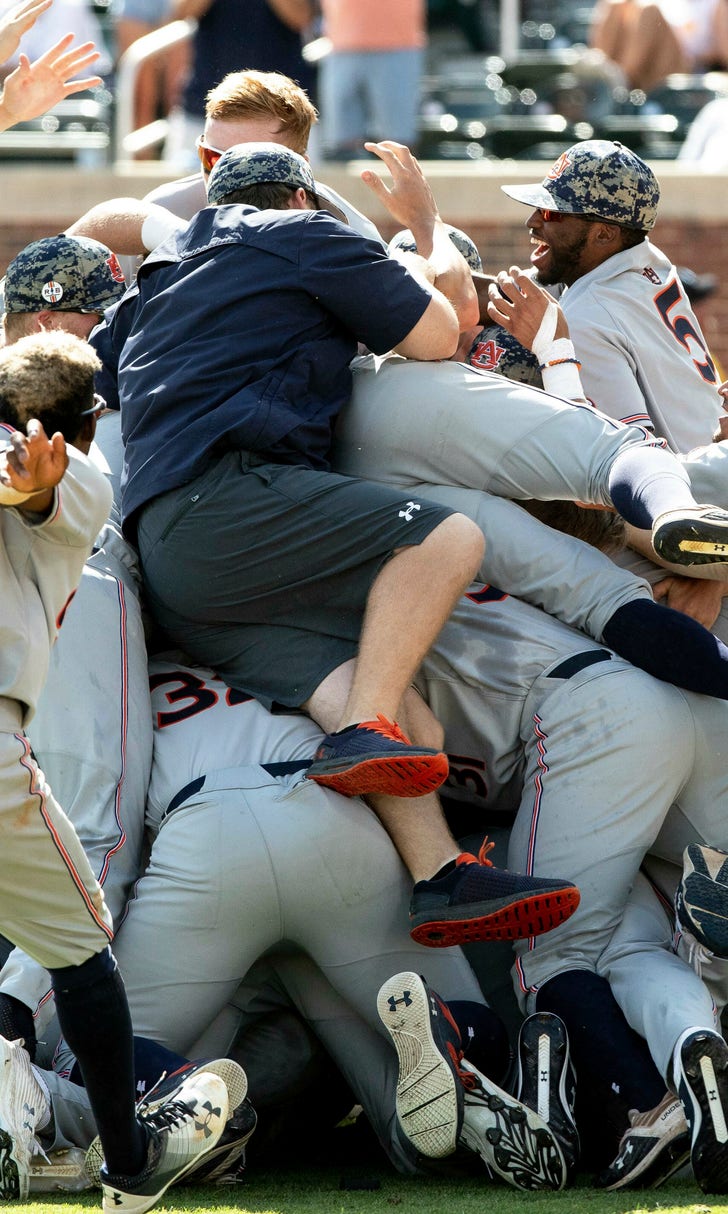 Auburn, Arkansas give SEC half of College World Series field

The Southeastern Conference flexed its baseball muscles Monday, with Auburn and Arkansas posting blowout wins in the deciding games of their super regionals and giving their league a record-tying four teams in the College World Series.

Auburn scored 13 runs in the top of the first inning to start a 14-7 win over host North Carolina, sending the Tigers to the CWS in Omaha, Nebraska, for the first time since 1997.

Arkansas, the national runner-up last year, scored seven runs over the second and third innings on its way to a 14-1 home win over Mississippi. The Razorbacks are heading to Omaha for the 10th time, and sixth since 2004 under coach Dave Van Horn.

The SEC's Vanderbilt and Mississippi State clinched bids Sunday. The conference also sent four teams to the CWS in 1997, 2004 and 2015; the Atlantic Coast Conference had four teams in Omaha in 2006.

This will be the first year since 2009 all eight teams are from different states, with no California schools making it for the second straight year and only the 11th time in the event's 73 years.

Auburn's 13-run first marked the second-most runs by a team in an inning in NCAA Tournament history. North Carolina starter Joey Lancellotti was pulled after walking the first four batters. Three relievers followed, and by the time it was over the Tigers had turned nine hits, five walks and an error in their biggest inning of the season.

Auburn became the first team to defeat the Tar Heels in a super regional in Chapel Hill. North Carolina had advanced to Omaha in each of the six previous supers it hosted.

Judd Ward, Rankin Woley and Edouard Julien had three hits apiece, and the Tigers finished with a total of 18. Aaron Sabato homered twice and drove in three runs for the Tar Heels.

Andy Katz Tiers: Intriguing Depth
Looking for teams not named Baylor or Gonzaga that can make a deep run in the tourney? Andy Katz has some dark horses.
1 day ago