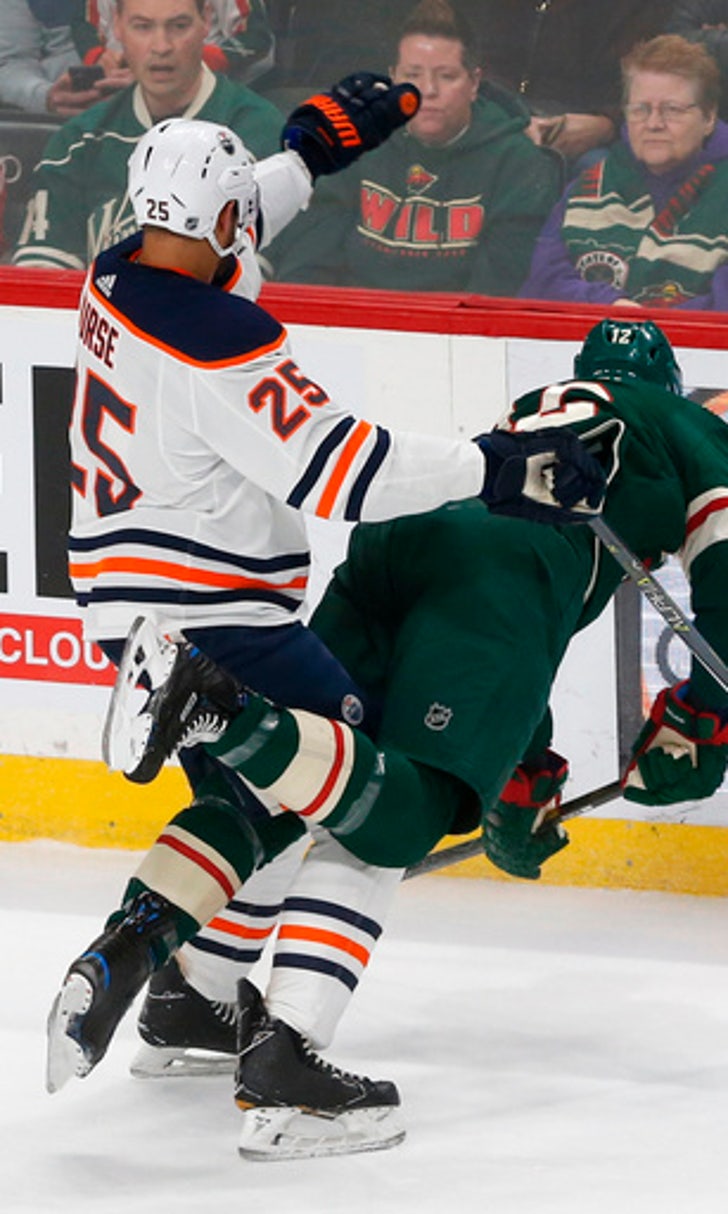 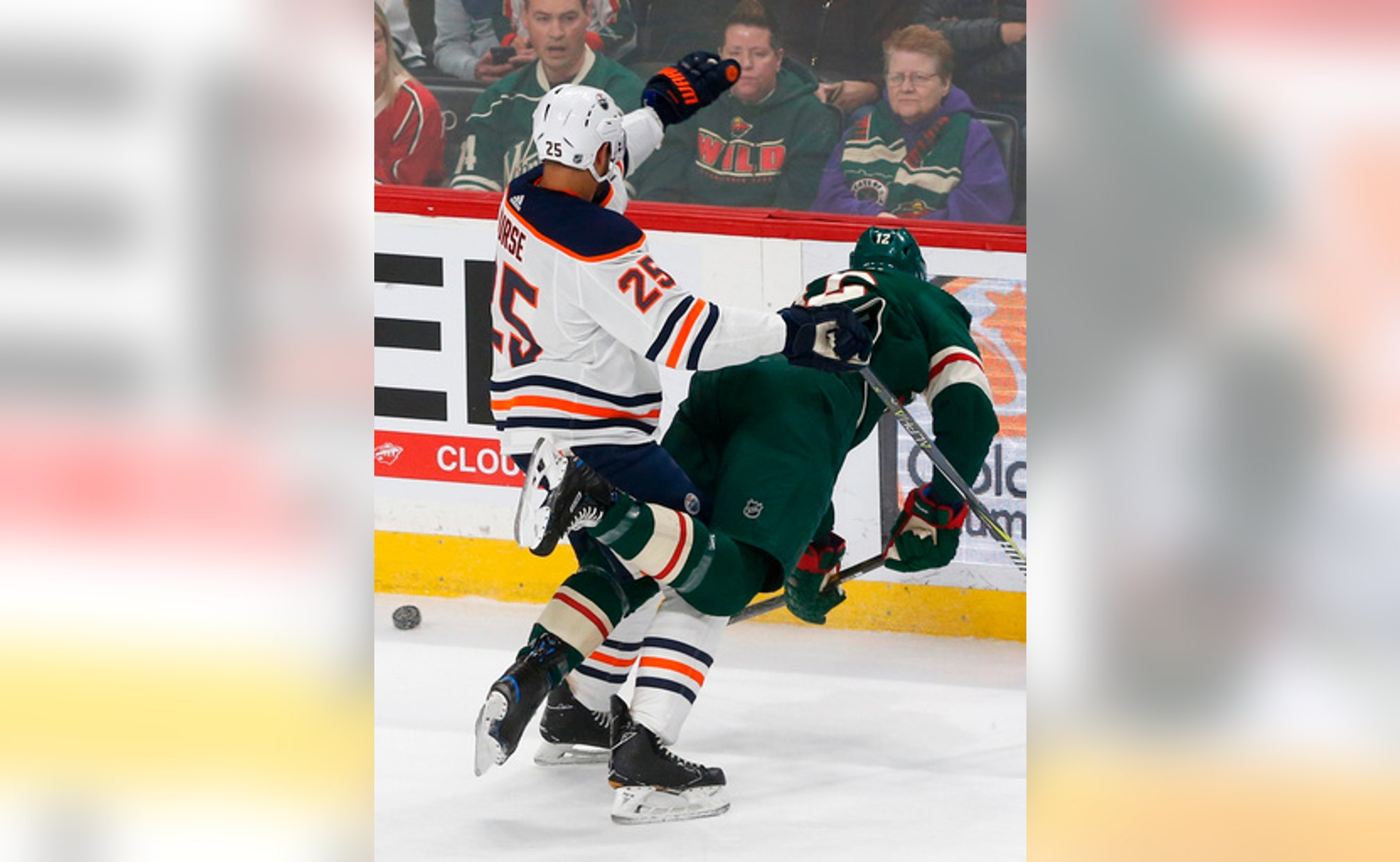 With 40 goals for playoffs-bound Wild, Staal has right fit

ST. PAUL, Minn. (AP) Eric Staal was coming off his least productive NHL season since he was a teenage rookie with Carolina when Minnesota took a flier on him two summers ago to add some depth at center.

The three-year contract was modest for a player with Staal's ability and accomplishments. The expectations were, too. Three consecutive seasons of decline in points per game, after all, don't provide a hint that the scoring touch or passing knack is primed for resurgence.

Bruce Boudreau could see the rebound potential, though. His first day of training camp with the Wild happened to be Staal's practice debut with his new club, and a strong impression was made on the new head coach.

''I said, `You know what? Everybody was wrong,''' Boudreau said. ''Because he did the skate test on the very first day, and he blew everybody out of the water. So I said to the staff, `He should be able to play for us.'''

Staal has done much more for the Wild than simply prove he can keep up and stabilize a key position with some savviness and leadership. Nobody on the team has scored more since he arrived, and with 40 goals this season he's tied for sixth in the league through Monday's games.

''I never thought a specific number was a goal. I don't ever usually think like that,'' Staal said. ''Once you start a season, it can go a lot of different ways, but once the puck starts hitting the back of the net and you're gaining confidence that way, you want to hold on to it as long as you can and accumulate as much as you can to help your team win.''

Staal became just the second player in NHL history, joining Gordie Howe, to record a 40-goal season at least nine years apart with none in between. Slumps can factor into that, but so does dedication.

''Look, he's won a Stanley Cup. He's won an Olympic medal. He's got all the money that he's ever going to need,'' Boudreau said. ''But when he came here he wanted to prove to the world that he's still a really good player, and to me he has.''

The lanky 33-year-old with the left-handed shot has been a big reason why the Wild, despite some rough patches of the schedule and significant injury absences by several of their best skaters, have clinched a spot in the playoffs for the sixth straight season.

''You want that, especially as a player who's in the second half of his career. You want to make sure you're in a spot to try to win again, and coming here I felt gave me that chance,'' said Staal, the second overall pick in the 2003 draft who won the Stanley Cup in 2006 at age 21 but only returned to the playoffs once more with the Hurricanes. ''We've still got some work to do here, but hopefully we can finish strong.''

Staal only has one goal-less stretch on his ledger longer than four games in a row, when he played six consecutive contests without scoring from Jan. 9-22. He still contributed four assists over that span. Not coincidentally, the Wild have only one losing streak larger than two. They dropped three in a row from Nov. 4-8.

''He's a guy we've definitely looked to to help lead us,'' said left wing Jason Zucker, one of the many linemates Staal has saddled up to this season - without, Boudreau said beamingly, a single complaint.

Durability has been one crucial component of his value, of course. Staal has yet to miss a game since signing the $10.5 million deal on July 1, 2016. The emotional steadiness he has contributed can't be overlooked, either.

The Wild actually left Staal exposed in the expansion draft, banking on his age being less attractive to the Vegas Golden Knights. His salary cap hit is only the ninth-highest on the roster.

''If he was playing in Toronto, he'd be up for the MVP,'' Boudreau said.

Settling in Minnesota was more than satisfying for Staal, with the perennial postseason opportunities and the relative proximity to his hometown of Thunder Bay, Manitoba, about a six-hour drive away. He and his wife, Tanya, have been able to raise sons Parker, Levi and Finley, in a similar northern culture and climate that he was raised in, delighting in seeing the boys at 8, 6 and 3 years old take to the local hockey rinks or eagerly hop on their sleds after the latest snowfall.

''All that stuff I grew up doing and loving, and now I'm kind of living it back through them,'' Staal said. ''It's definitely made it a ton of fun.''