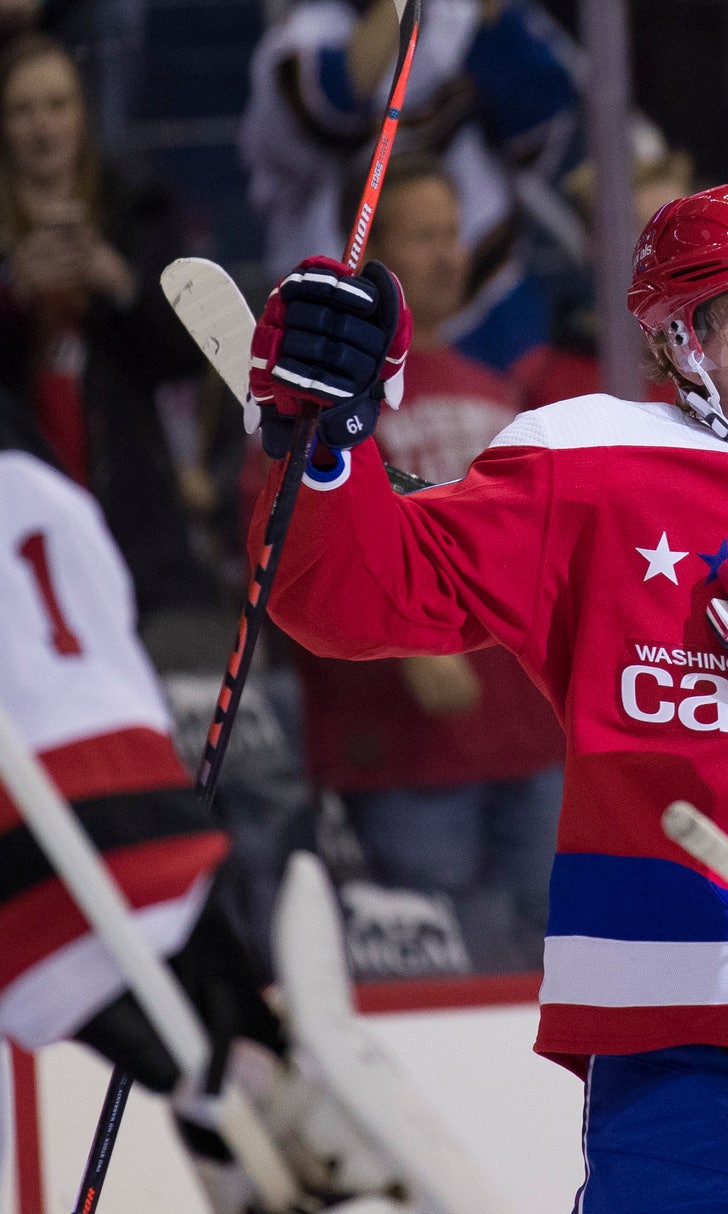 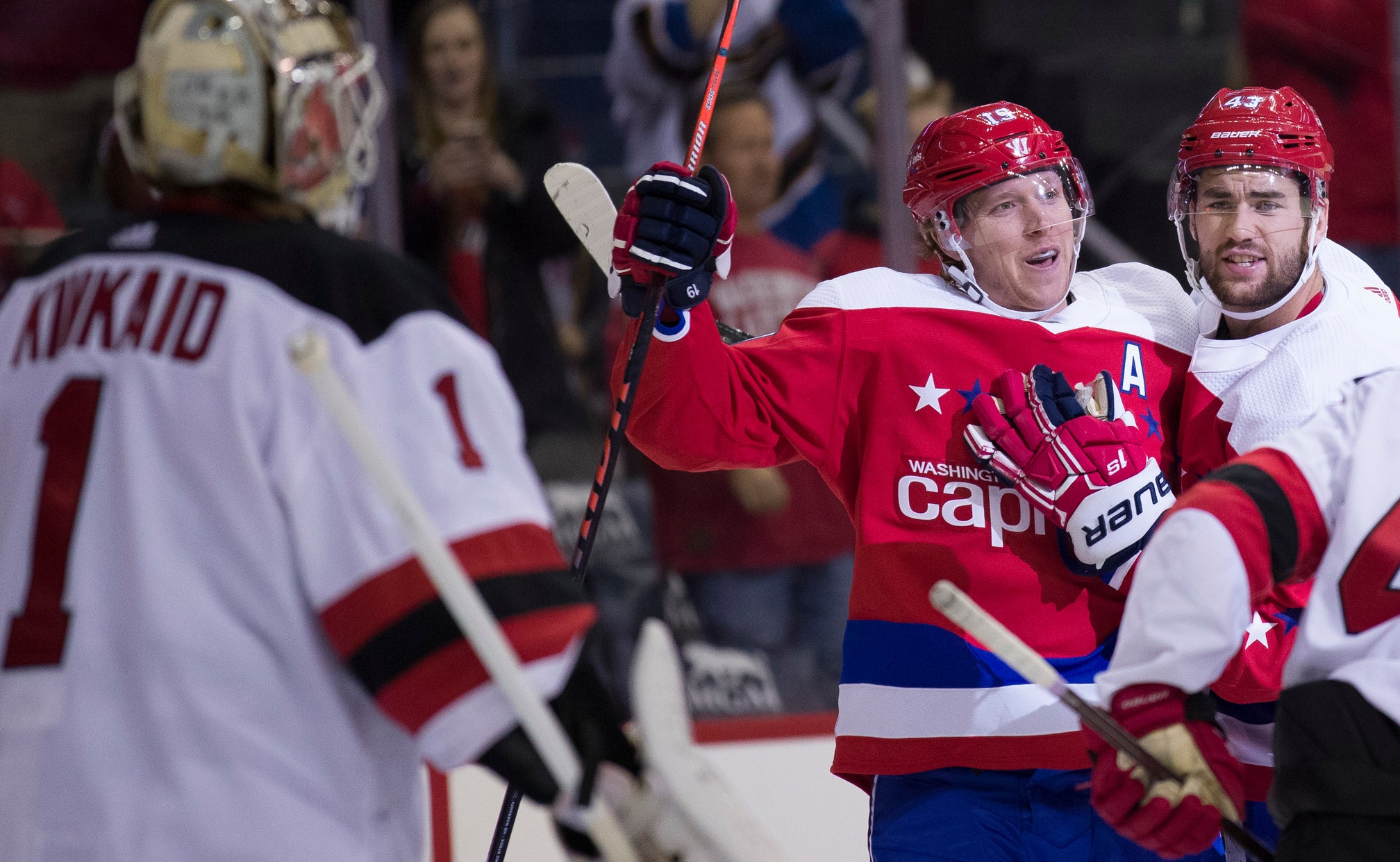 previous story
Pitt pulls away for 74-53 win over Duquesne in the City Game
next story
Mitchell scores 30, Jazz beat Hornets in Korver’s debut

Wilson scores, is ejected as Capitals extend win streak to 7

WASHINGTON (AP) — Tom Wilson got back on the score sheet and put himself back under the microscope that has become a part of his existence in the NHL.

Wilson scored again before being ejected for a questionable hit and Nicklas Backstrom had a hat trick and four points in the Washington Capitals' 6-3 victory over the New Jersey Devils on Friday night that extended the defending Stanley Cup champions' winning streak to seven games. Wilson had a short-handed goal and showed some of his best attributes as a power forward and penalty killer before getting kicked out of the game for a polarizing hit on Brett Seney that earned him a match penalty and at least another look from the league's department of player safety.

"He's huge for our team," center Evgeny Kuznetsov said of Wilson. "You can see he's playing well and he scored the goals, he make those dirty plays when you've got to battle for the puck, when you go in the corner. It's not easy to play there, and he play unbelievable for us. That's why he's such a big piece for us."

Wilson now has seven goals and 13 points in nine games since coming back from a lengthy suspension. He extended his career-best goal streak to five games and point streak to seven games and at the same time raised questions about whether he's headed toward further discipline.

After Seney released the puck and it had gone into the corner late in the second period, Wilson skated up from behind and hit him with his left shoulder. Wilson was assessed a match penalty for an illegal check to the head, which carries with it an automatic suspension that the NHL must review but could decide to rescind.

Wilson, who was given a 20-game suspension that was reduced to 14 for an illegal check to the head in Washington's preseason finale, could avoid being suspended this time. After review, he did not make principal contact to Seney's head, it did not look like a predatory play and the Devils forward returned at the start of the third.

Seney said the main contact was to the back of his left shoulder. Capitals coach Todd Reirden considered it incidental contact and couldn't believe how it was called a penalty.

"I think any other player, I don't know, it's maybe an interference call," Reirden said. "He's not even attempting to make a hit, and we get a five-minute penalty that could've cost us the game. This guy is doing everything he can to try to play the right way, and this is how things are happening."

The Capitals killed off all five minutes of the major penalty. Wilson did not speak to reporters.

Backstrom had a hat trick for the first time since Dec. 13, 2014, and added an assist for a four-point game. Andre Burakovsky also scored for Washington, which got 33 saves from Braden Holtby, including two on breakaways by Seney and another on former Capitals forward Marcus Johansson.

"Breakaways are almost completely different than the rest of the game," said Holtby, who has won five consecutive starts. "You almost have to view them as two different things because you play them different."

Holtby faced 36 shots and kept the Capitals ahead all game. After the Devils got within one goal in the final two minutes, Alex Ovechkin scored an empty-netter, his 626th goal that put him into sole possession of 15th on the NHL's all-time list, and Backstrom completed the hat trick with his own empty-netter.

Travis Zajac, Nico Hischier and Johansson scored and Keith Kinkaid allowed four goals on 29 shots for the Devils, who have lost four in a row and six of seven.

Hurt by a bad line change, a misplay by Kinkaid and other mental lapses, New Jersey fell to 2-10-1 on the road this season.

"It's a situation where you have to continue to work at it, look at solutions and look at different ways where you could do a better job and the players can do a better job because it's certainly not good enough," coach John Hynes said. "We all know what we are supposed to do. Now we've got to do it regularly. That's the challenge."

NOTES: According to the NHL, linesmen Brandon and Travis Gawryletz are the third known set of brothers to work the same game after Paul and Greg Devorski from 1993-2005 and Ernie and Sibby Mundey from 1946-49. The Gawryletz brothers officiated one previous game together on Jan. 20. ... Kuznetsov returned after missing the past six games with a suspected concussion. ... RW T.J. Oshie missed his seventh consecutive game with a suspected concussion. ... New Jersey C Michael McLeod, a 2016 first-round pick, made his NHL debut.

Devils: Return home to host the Winnipeg Jets on Saturday.

Capitals: Look to extend their winning streak to eight against the Anaheim Ducks on Sunday.