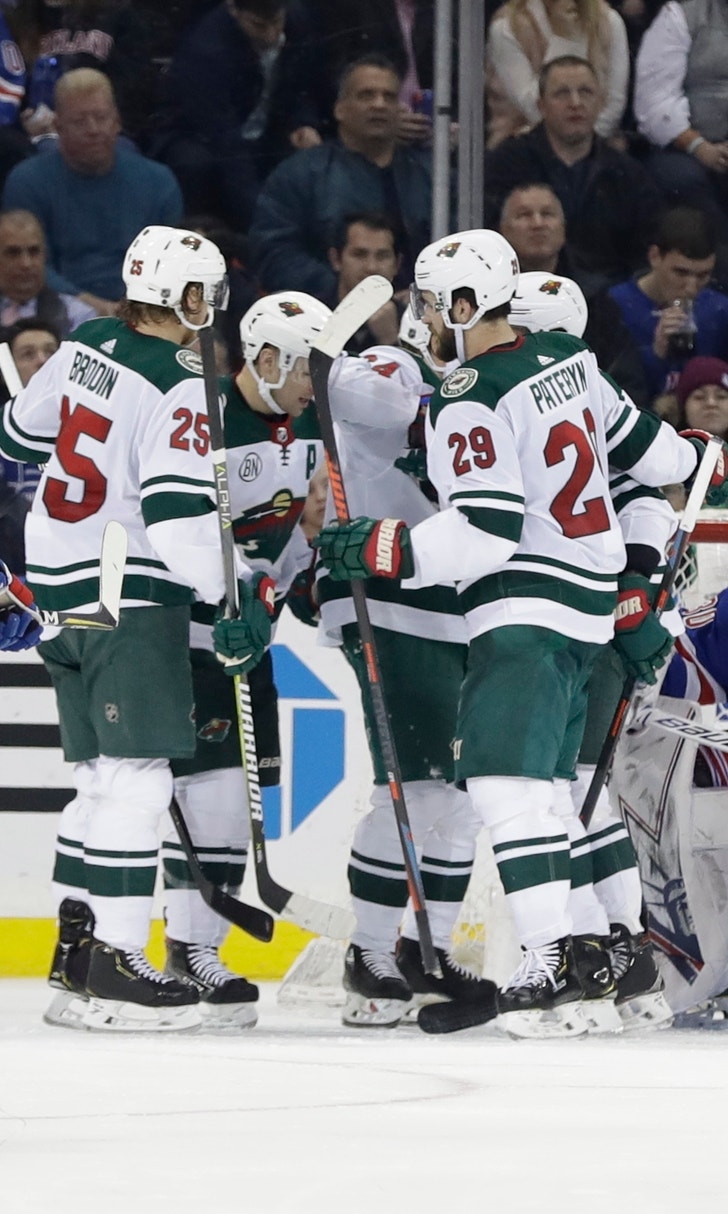 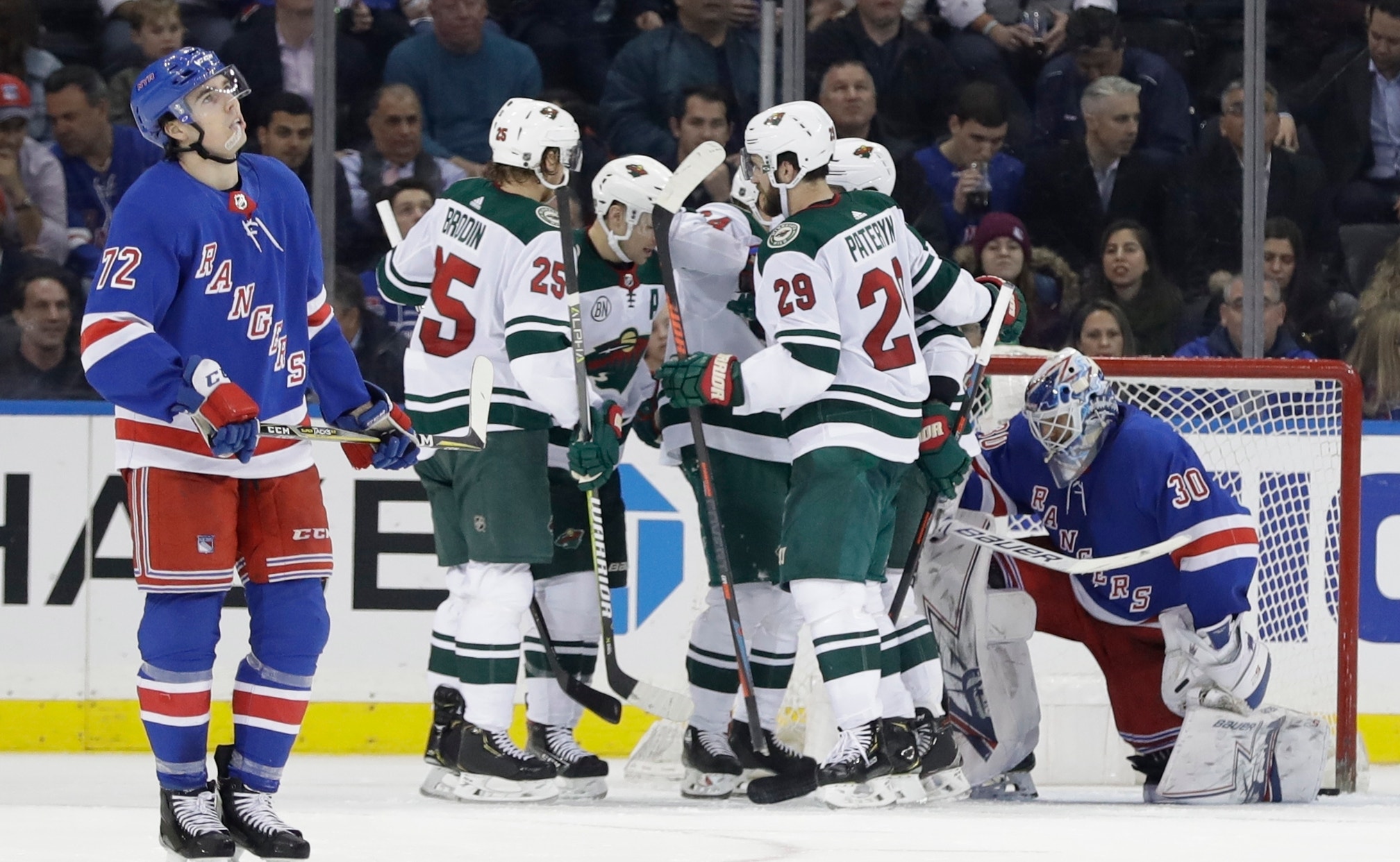 NEW YORK (AP) — Zach Parise and his newest teammate got the Minnesota Wild a much-needed win.

Parise had a goal and an assist, and the Wild ended a five-game skid with a 4-1 win over the New York Rangers on Thursday night.

Ryan Donato, who was acquired in a trade with Boston on Wednesday, had two assists in his Wild debut.

Mikael Granlund and Jared Spurgeon also scored and Jordan Greenway added an empty-netter. Eric Staal had two assists and Devan Dubnyk made 33 saves for the Wild, who earned their first victory since Feb. 9 at New Jersey.

Despite their recent struggles, the Wild are still in the race for one of the final playoff spots in the Western Conference.

"The (standings) points were more important for our team," Donato said. "Big W. Hopefully we can build off this."

Pavel Buchnevich scored for the Rangers, and Henrik Lundqvist made 31 saves.

With Minnesota leading 2-1, Rangers defenseman Brady Skjei was tripped and Parise took the loose puck and beat Lundqvist for his team-leading 24th goal of the season at 11:03 of the third.

"From the replay, it looked he might have tripped me," Skjei said. "It's a fast game, you're not going to get all the calls you want, and obviously it was a huge turning point in the game. It's a quick game, some calls are missed sometimes."

The Rangers then had a four-minute power play to try and get back in it but were unable to take advantage.

"We haven't been to close out games when we've had the lead lately," Parise said. "To be able to get the lead and kill of a four-minute penalty, it was a good job by us."

New York had other good chances to tie it earlier in the period, but Mika Zibanejad hit the post and Ryan Strome missed an open net on a rebound a few minutes later.

The Wild retook a 2-1 lead in the second period. Greg Pateryn wristed a shot toward the net, and Granlund, while falling to the ice, sent the rebound past Lundqvist at 8:41 for his 15th of the season.

"That the kind of play that Granny's (Granlund) been known to score at," Wild coach Bruce Boudreau said. "Hopefully if he can continue to do that then we're going to score goals. When he's playing like that, then you find you're going to score."

Down 1-0 after the first period, the Rangers tied it early in the second on the power play.

Buchnevich took a pass from Tony DeAngelo at the right faceoff circle and ripped a shot that sneaked past Dubnyk for his 12th of the season at 5:06.

The Wild opened the scoring with a power-play goal.

Donato made a nice cross-ice pass to Spurgeon, who quickly sent a pass to Staal. Staal was stopped on a sprawling save by Lundqvist, but Spurgeon tapped in the rebound for his 12th goal at 15:04 of the opening period. Donato earned an assist on that goal and on Greenway's score.

Spurgeon's goal ended the Wild's goal drought at more than 171 minutes. They were coming off consecutive shutouts and hadn't scored since the second period of a 5-4 overtime loss to the Devils on Feb. 15.

The Wild nearly made it 2-0 less than a minute later, but the goal was waived off after a review because Joel Eriksson Ek was offside on the play.

NOTES: Granlund has 10 points (three goals, seven assists) in his past 12 games. ... The Wild recalled forward J.T. Brown from Iowa (AHL). ... Rangers D Adam McQuaid left the game in the first period for precautionary reasons and did not return. ... Buchnevich has a point in four of his past five games, and he has five points (three goals, two assists) in that span. ... DeAngelo extended his points streak to five games (six assists). His five-game assist streak and five-game point streak are both career highs. ... Forward Lias Andersson, the Rangers' first-round pick in 2017, was recalled from Hartford (AHL).

Wild: Face the Red Wings in Detroit on Friday night.

Rangers: Host the Devils in a matinee on Saturday.