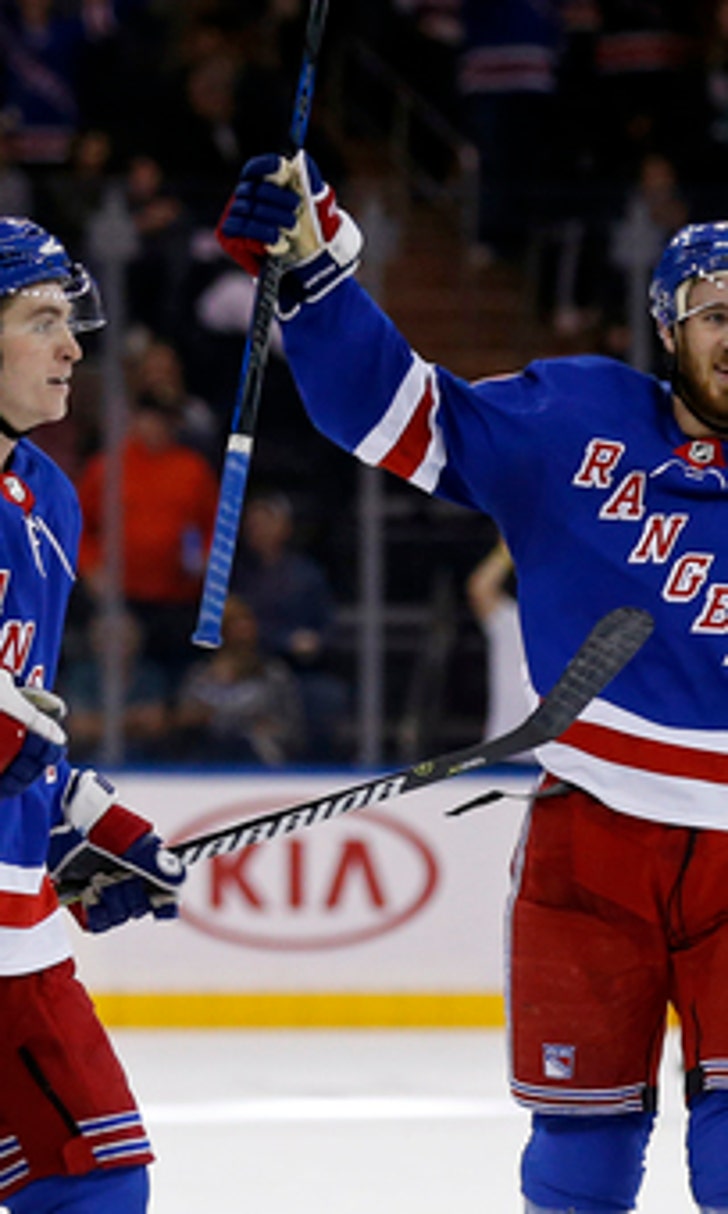 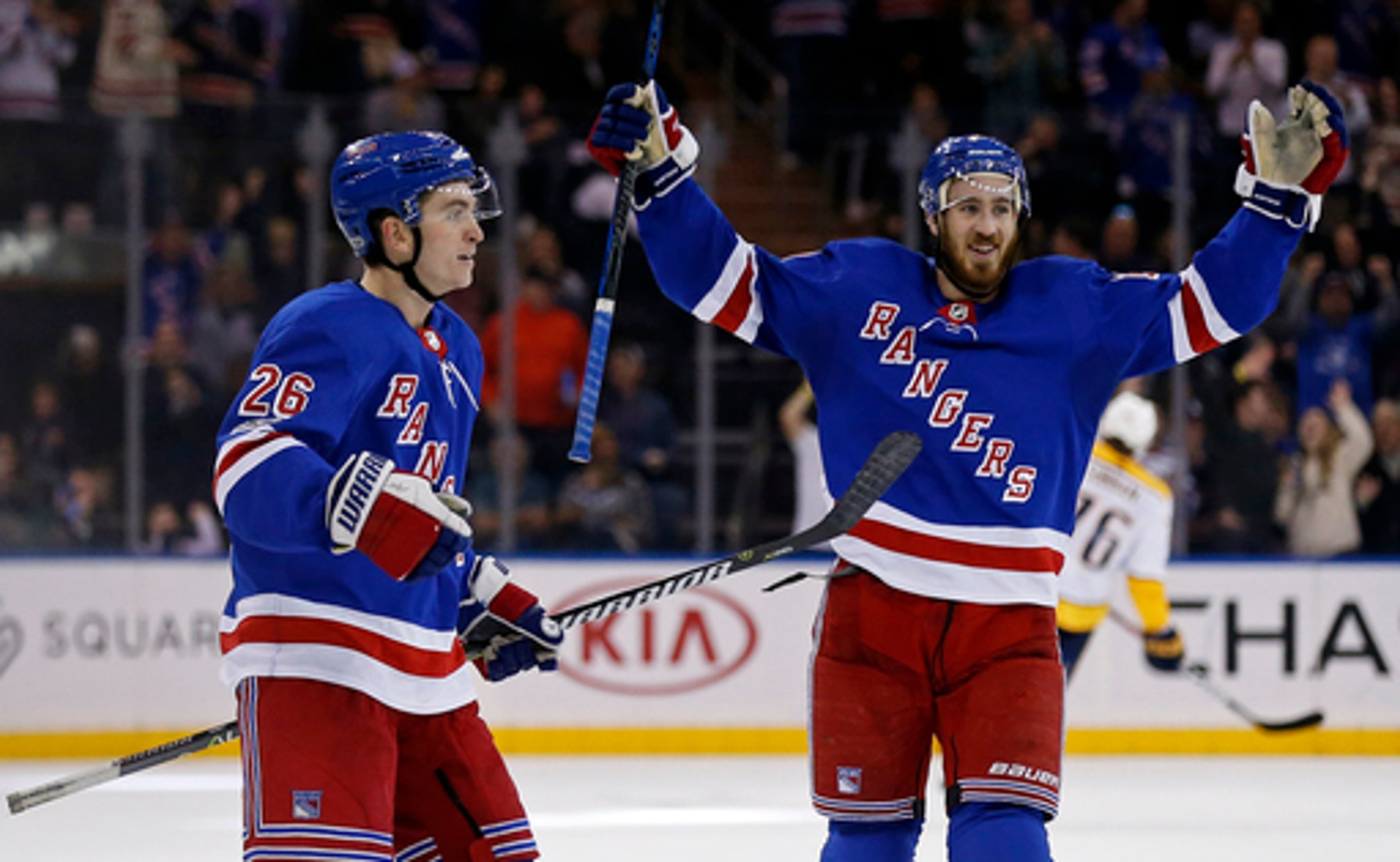 Stamkos had a goal and three assists, and Kucherov had two goals and an assist. They are the first teammates to start the season with nine-game streaks since St. Louis' Pavol Demitra and Doug Weight in 2001-02.

Andrei Vasilevskiy, coming off a 43-save blanking of Columbus on Thursday night, lost his bid for second straight shutout bid on Jake Guentzel's goal with 1:42 to play. Vasilevskiy finished with 28 saves.

Pittsburgh is 5-2 over its last seven games, with both losses against Tampa Bay.

LAS VEGAS (AP) - William Karlsson scored at 4:36 of overtime to help Vegas win for the sixth time in seven games to open its inaugural season.

Reilly Smith and Colin Miller scored in the second period for the Golden Knights. Malcolm Subban stopped 37 shots before being helped to the dressing room by two trainers with 9:10 remaining in regulation after stretching out on a wide shot by Jaden Schwartz. Oscar Dansk stopped 10 of the 11 shots he faced in his NHL debut, making key stops at the end of regulation and in overtime.

With 5:08 left in the third, Schwartz fed a wide-open Pietrangelo, who fired a slap shot past Dansk to tie the score 2-2.

COLUMBUS, Ohio (AP) - Anze Kopitar broke a tie with 2:14 left with his second goal of the game and Los Angeles beat Columbus to remain the only NHL team unbeaten in regulation.

At 6-0-1, Los Angeles is off to the best start in franchise history.

The Coyotes have been playing better lately, but their only point is an overtime loss to Vegas the second game of the season.

Patrick Kane and Richard Panik each scored and Jonathan Toews had a pair of assists for Chicago, which had lost three of four. Tommy Wingels added an empty-net goal after having a penalty shot wiped away upon review. Clayton Keller had his NHL rookie-best sixth goal of the season and Christian Fischer also scored for the Coyotes, who dropped to 0-7-1 with a long road trip next. Domingue stopped 24 shots.

NEW YORK (AP) - Kevin Hayes and Jimmy Vesey each had a goal and an assist and New York beat Nashville to snap a five-game skid.

Chris Kreider added a power-play goal and David Desharnais extended his points streak to four games to help the Rangers pick up their second victory of the season.

Henrik Lundqvist made 23 saves for his 407th NHL victory. He's now tied with Glenn Hall for ninth place on the NHL's career list.

BOSTON (AP) - Ryan O'Reilly scored 2:59 into overtime to give Buffalo the win over Boston, capping a comeback from a pair of three-goal deficits.

Former Boston University star and Hobey Baker winner Jack Eichel had a goal for the Sabres. Jason Pominville and Benoit Pouliot and Evander Kane also scored for Buffalo, which has just one regulation win this season. Robin Lehner stopped 27 shots.

Brad Marchand and David Pastrnak each scored two goals for the Bruins, and Anton Khudobin made 37 saves.

WASHINGTON (AP) - James Reimer stopped 41 shots filling in for the injured Roberto Luongo to help Florida end a three-game losing streak with a win over Washington.

Evgenii Dadonov, Vincent Trochek and Aleksander Barkov each had a goal and an assist for Florida, and Connor Brickley also scored. Luongo was out after injuring his right hand Friday night against Pittsburgh.

John Tavares had a goal and two assists, Josh Bailey added a goal and an assist, and Andrew Ladd also scored to help the Islanders win for the third time in four games. Thomas Greiss stopped 28 shots.

Logan Couture scored all three goals for the Sharks, completing the hat trick with 1:52 remaining to pull them within one. Aaron Dell finished with 18 saves.

PHILADELPHIA (AP) - Wayne Simmonds scored on a feed from Valtteri Filppula with 2:15 left and Philadelphia held off Edmonton.

Filppula skated into the slot and found Flippula to his right, who one-timed a shot past Cam Talbot to give the Flyers three wins in four games.

Patrick Maroon scored in the second period, and Talbot stopped 22 shots for the Oilers. They have dropped five of their first seven games.

Nate Thompson and Ryan Dzingel also scored for the Senators, who have earned points in seven of their eight games (4-1-3) and won at home for the first time after coming in 0-3-1. Craig Anderson stopped 28 shots in his seventh start of the season.

CALGARY, Alberta (AP) - Ryan Suter had a goal and two assists to rally Minnesota past Calgary.

Chris Stewart, Jared Spurgeon and Daniel Winnik also scored for the Wild, and Alex Stalock stopped 35 shots - including 18 in the first period.