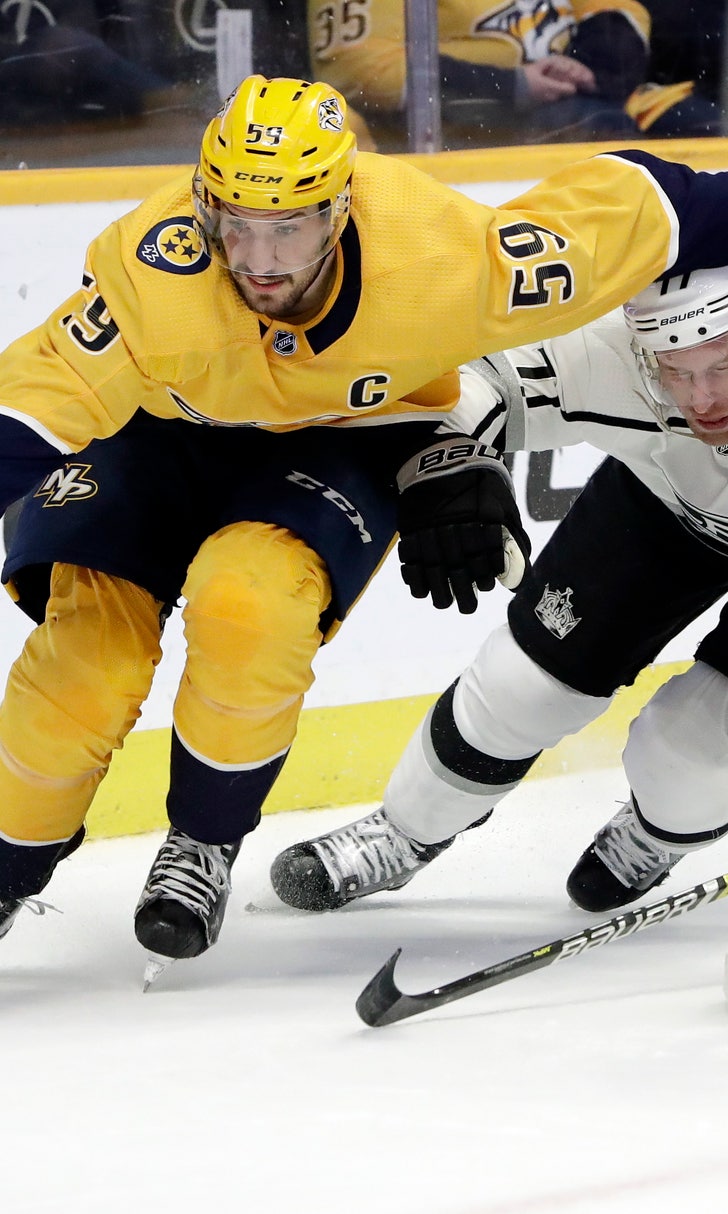 NASHVILLE, Tenn. (AP) — The Nashville Predators know it's time to show they can be consistent period to period and game to game.

They're starting to get some results.

Captain Roman Josi had a goal and an assist as the Predators beat the Los Angeles Kings 2-1 Thursday night to move atop the Central Division with their third win in four games.

Josi said he thought they played a pretty complete game, something they talked about a lot.

"We talked about having some consistency and having a couple of good games in a row," Josi said. "I thought we played two good games, and now we've got to focus on the next one and do it again."

The Predators now have 77 points to edge ahead of Winnipeg (76), though the Jets have three games in hand on Nashville.

"It's nice to win two in a row, and hopefully we can start making some noise and put some streak together," said Nashville goalie Pekka Rinne, who made 28 saves.

Michael Amadio scored for the Kings, who now are 0-4-2 in losing their sixth straight.

The Kings not only are last in the Western Conference, they are 10 points out of the second wild card.

"It's an unbelievable opportunity for young players right now," Kings coach Willie Desjardins said. "If I'm a young guy, the only thing I want is a chance to play and guys are getting that chance now where they haven't got in the past."

Nashville coach Peter Laviolette mixed up his top two lines a bit looking to spread out the offense. He moved Viktor Arvidsson, who has 21 points in his past 25 games since returning from a broken thumb, to the second line with Turris and Calle Jarnkrok while moving Kevin Fiala to the top line with Filip Forsberg and center Ryan Johansen.

Turris scored the first goal, his first since returning from injury Feb. 7 and seventh of the season, on the power play where Nashville has struggled. His snap shot from the left circle beat Jonathan Quick at 8:50 of the first period for a 1-0 lead. Rinne kept the Kings scoreless 70 seconds later after a turnover behind the net, scrambling back to stop Trevor Lewis' shot from the slot.

Josi put Nashville up 2-0 with his 14th goal this season within the first minute of the second. Arvidsson, who did not take part in the morning skate, sent a backhanded pass to Josi, who went top shelf with his wrister from the left circle.

"I knew he was going to pass it," Josi said. "Obviously, he's a goal scorer, but he can be a great playmaker too. It was an unbelievable pass . just open up everything and I had a lot of space right there in the middle."

Amadio pulled Los Angeles within 2-1 scoring off a rebound at 9:24 of the third, and the Kings got the man advantage 25 seconds later when Turris went to the box for hooking Ilya Kovalchuk. But the Predators killed the penalty, keeping the Kings 0-for-3 with the man advantage.

Johansen hit the post with five minutes left , missing an insurance goal for Nashville that Rinne wound up not needing.

NOTES: Josi now has 21 points in his last 19 games for Nashville. He also became the first defenseman in franchise history with four seasons with at least 50 points. ... Before the game, the Predators put forward Craig Smith on injured reserve with a lower-body injury and recalled Taylor Gaudet from AHL Milwaukee. ... Nashville improved to 27-3-1 when scoring first and 16-1-1 when leading after the first period.