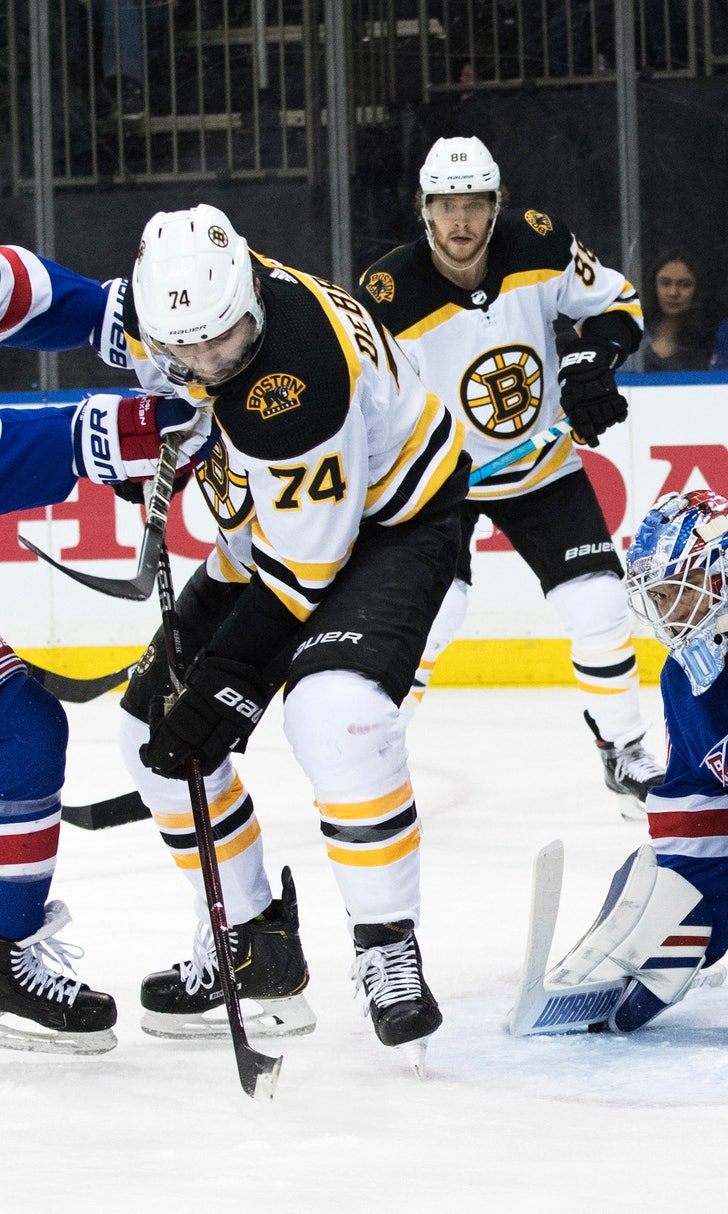 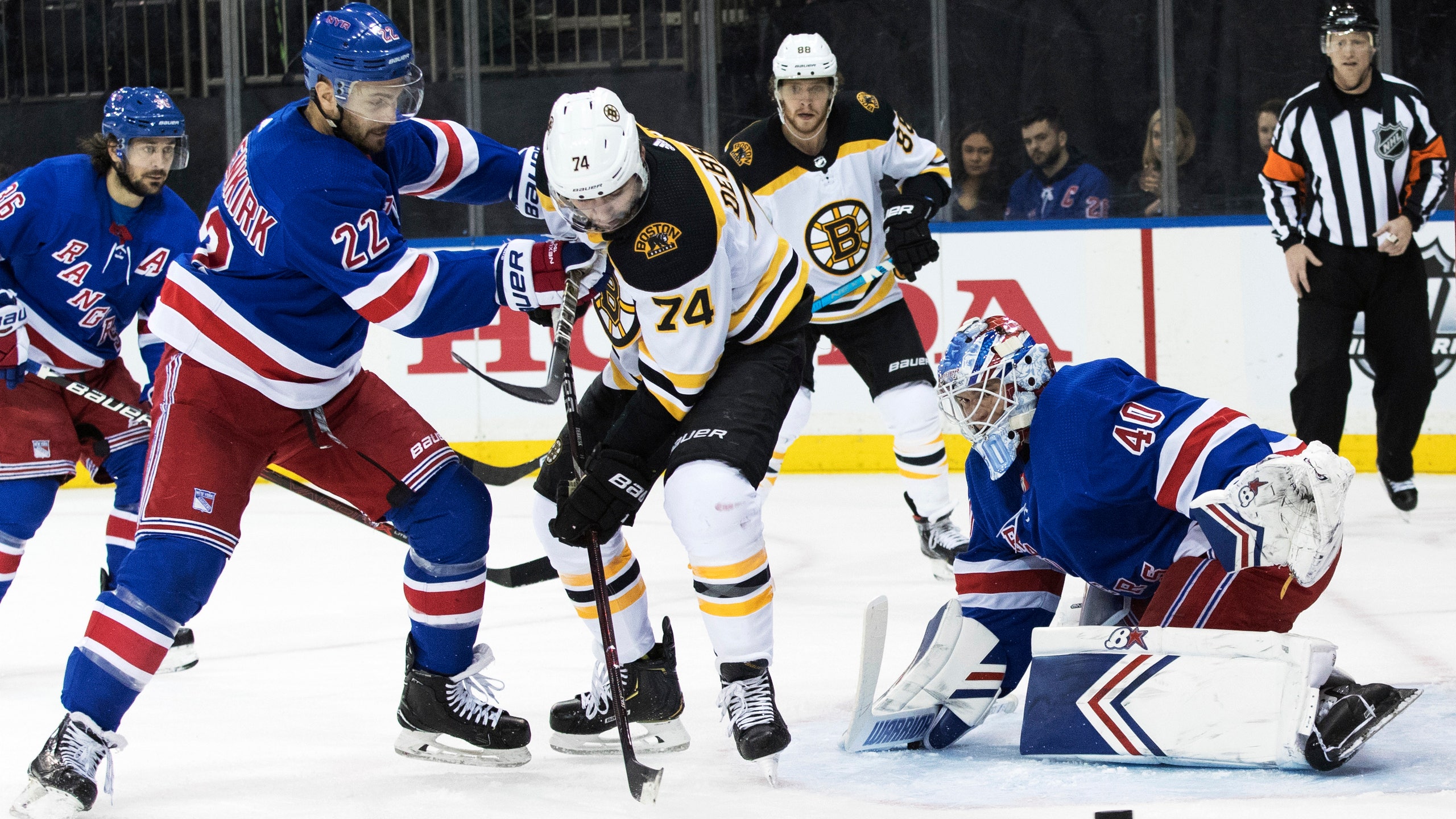 NEW YORK (AP) — Successful in his only previous shootout attempt, Tony DeAngelo tried the same approach. And he got the same result.

DeAngelo scored the decisive goal in the seventh round of the shootout and the New York Rangers rallied from two goals down in the third period to beat the Boston Bruins 4-3 on Wednesday night.

"I kind of did the same move as last time," said DeAngelo, who beat Jaroslav Halak with a forehand from the right side into the top right corner. "To come back, pick up two points coming back down two in the third is a big win for us."

Mika Zibanejad, Kevin Hayes and Filip Chytil scored for New York and Alexandar Georgiev finished with 27 saves. The Rangers won for the second time in five games (2-2-1) after a stretch in which they won four of five.

"We gave them too many opportunities in the second period," New York coach David Quinn said. "We talked about we just go to move past that, we can't let that bad second period get in the way of the third period. ... We did a pretty good job in the third."

Danton Heinen, David Pastrnak and Patrice Bergeron scored for Boston, Brad Marchand had two assists, and Halak stopped 36 shots. The Bruins, who squandered a 3-1 lead in the second, had a two-game winning streak end, but earned a point for the fifth straight game (2-0-3).

Zibanejad and Marchand each scored in the third round of the tiebreaker. After DeAngelo gave the Rangers the edge, they won it when David Krejci missed on the Bruins' last attempt. That improved New York to 6-2 in shootouts this season.

Each team had chances as they alternated odd-man rushes in the 3-on-3 overtime, with Halak making a sensational save to deny Zibanejad with 1:06 left. Halak earlier thwarted Chytil in front. On the other end, Georgiev stopped Sean Kuraly's tip try with 1:23 to go.

"We let it slip in the third," Bergeron said. "That's where it was played out. That game shouldn't be going to overtime."

The Rangers pulled to 3-2 at 9:24 of the third when Jimmy Vesey sent a centering pass in front and Hayes poked it past Halak for his 12th.

Chytil then tied it on a power play, knocking in the rebound of Pavel Buchnevich's slap shot from the left side with 7:19 left for his 10th.

"We got the much-needed goals and kept working," Zibanejad said. "Had some good chances in overtime, and finished it off in a shootout. It was nice."

Boston was down 1-0 after one period, but took the lead with three goals about 4 1/2 minutes apart in the second.

First, Matt Grzelyck's slap shot from the left point deflected off Heinen and past Georgiev with 9:23 left. It was Heinen's seventh of the season.

Pastrnak then put Boston ahead with his 31st, deflecting a pass in front by Krejci into the right side with 8:11 remaining.

Bergeron, who played in his 1,000th game Tuesday night in a home victory over the Islanders, gave the Bruins a two-goal lead, tipping Torey Krug's pass in front for his 19th with 4:49 remaining. It was Boston's third power-play goal in 17 chances over the last six games.

The Rangers outshot the Bruins 12-8 in the first period.

Zibanejad gave the Rangers a 1-0 lead on a one-timer from between the circles with 2:15 left in the opening period. It was his 22nd goal of the season, and 11th in the last 12 games.

NOTES: Pastrnak has six goals and 13 points in his last 10 games. ... Marchand has 11 assists and 14 points in his last nine games. ... The Bruins have lost nine of the last 10 meetings (1-7-2) against the Rangers. ... New York won the first meeting this season, 3-2 at Boston on Jan. 19. The teams conclude the season series March 27 at Boston. ... Rangers traded F Cody McLeod to Nashville earlier in the day in exchange for a seventh-round pick in the 2020 draft. Vinni Lettieri was recalled from Hartford of the AHL to fill the vacated roster spot. ... Zibanejad has totaled 19 points in the last 12 games. ... Zuccarello, who had an assist on Zibanejad's first-period score, extended his point streak to nine games, with 10 assists and 15 points in the stretch. ... The Rangers will celebrate the 25th anniversary of the 1994 Stanley Cup championship team on Friday before the game against Carolina.

Bruins: Host Los Angeles on Saturday to open a stretch of three straight at home.

Rangers: Host Carolina on Friday night in the fourth of a five-game homestand.