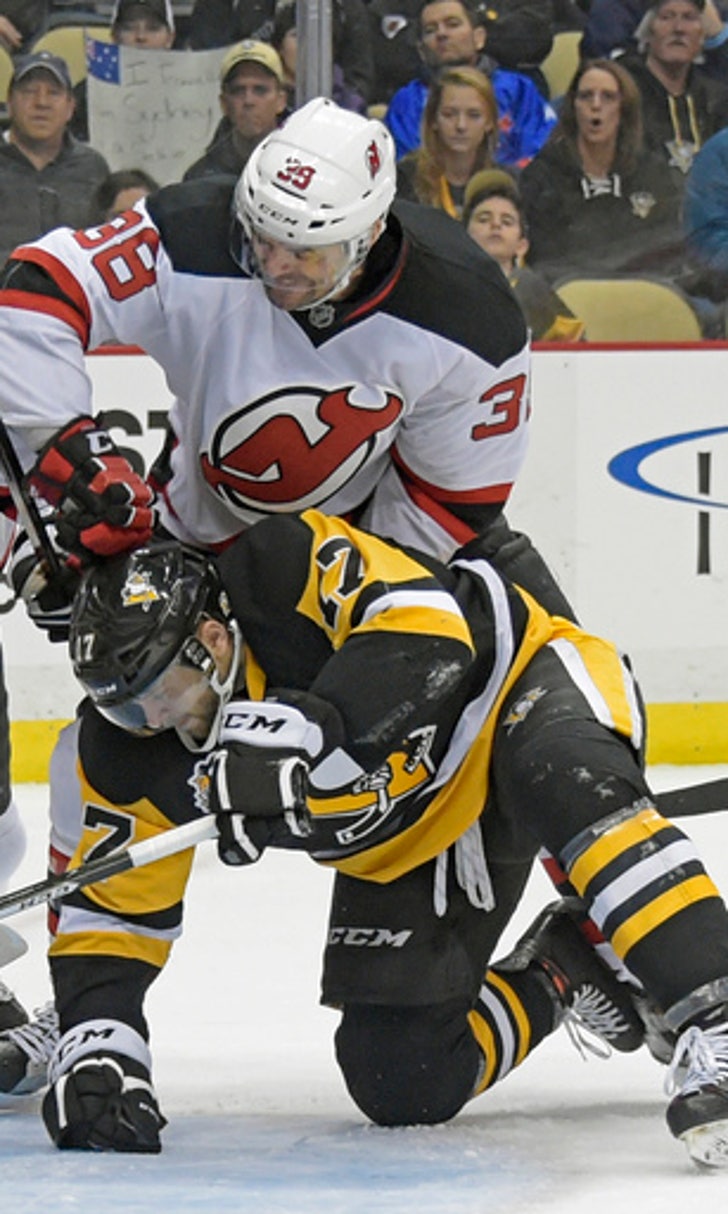 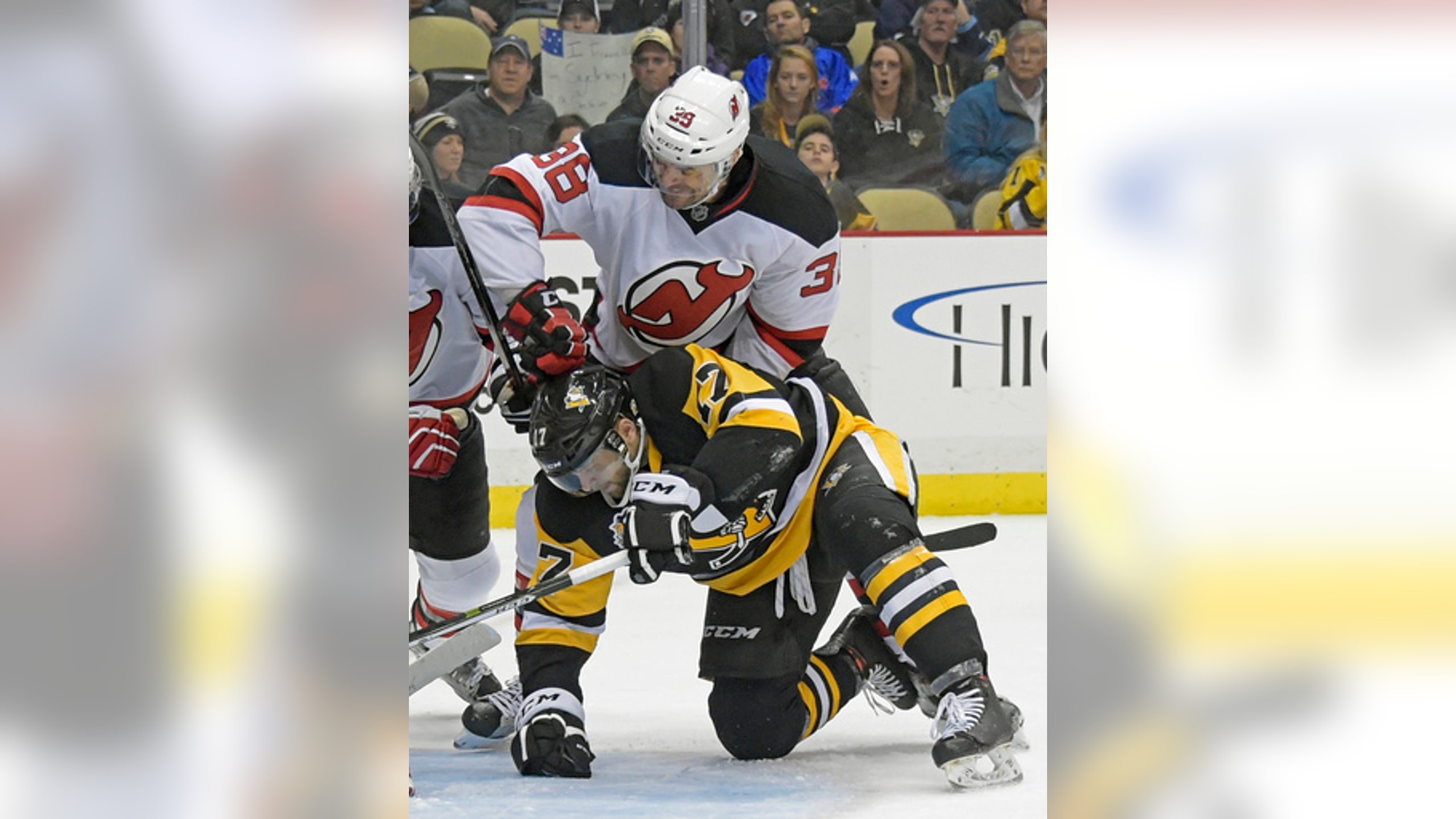 PITTSBURGH (AP) The Pittsburgh Penguins haven't lost consecutive games in regulation for more than a year. Coach Mike Sullivan has a pretty good theory about one of the reasons why: He happens to have the best player on the planet at his disposal in star center Sidney Crosby.

''I don't know if you guys noticed but we tend to start him a fair amount,'' Sullivan joked. ''One of the reasons we do is he usually wins the opening faceoff and we grab momentum right off the bat.''

Crosby was at it again Friday night, picking up his NHL-leading 24th goal as the Penguins bounced back from one of their worst performances of the season with a 4-1 victory over the New Jersey Devils.

Chad Ruhwedel added the first goal of his career for Pittsburgh. Eric Fehr and Patric Hornqvist also scored, and Marc-Andre Fleury made 22 saves to win for the first time in three starts.

The Penguins improved to 8-0-1 in their last nine home games while providing an immediate response after getting crushed 7-1 in Columbus on Thursday.

''It was a rough one (Thursday) night,'' Fleury said. ''It was good that we got to play right away and not spend Christmas thinking about it.''

Kyle Palmieri scored for the Devils, who lost for the eighth time in nine games. Cory Schneider stopped 35 shots but received little help in front of him.

Pittsburgh's surge to the top of the Metropolitan Division came to an abrupt halt against the streaking Blue Jackets, who overwhelmed the Penguins over the final two periods and handed the defending Stanley Cup champions their second six-goal loss of the season.

Barely 24 hours later and back home in front of the team's 450th consecutive sellout crowd, Pittsburgh took control early and didn't let up.

Crosby, as he's done repeatedly this season, got the Penguins started, taking a feed from Justin Schultz and ripping a one-timer from the top of the right circle over Schneider's glove for his NHL-best ninth power-play goal 11 minutes into the first. It was also the eighth time Crosby scored the opening goal of the game, also tops in the league.

New Jersey, which snapped a seven-game slide with a shutout victory over Philadelphia on Thursday, managed just two shots in the opening period and one of them was a rink-long clear that made its way on net.

The Devils fell behind 2-0 when defenseman Jon Merrill's attempted clear in front of Schneider bounced in off Fehr at the side of the net 4:13 into the second. It marked Fehr's first goal since the veteran forward spent five games as a healthy scratch earlier this month.

The Devils squandered a 5-on-3 power play - highlighted by a post-to-post save by Fleury - but briefly got back in it when Palmieri slid a rebound underneath a sprawled Fleury 13:24 into the second.

Pittsburgh restored its two-goal advantage when Chris Kunitz chased down a loose puck, raced into the New Jersey zone and then dropped it to Ruhwedel at the point. The defenseman, who played 33 games across five seasons with Buffalo and was called up earlier this week by the Penguins after injuries to Kris Letang and Trevor Daley, sent a shot through a screen and by Schneider with 38 seconds left in the second.

''We played well at times, but we have to play better for longer periods of time to be able to come away with the end result that we had (against Philadelphia),'' Devils coach John Hynes said.

NOTES: Pittsburgh made struggling D Derrick Pouliot a healthy scratch. His replacement, Steve Oleksy, earned a 5-minute fighting major after trading haymakers with New Jersey's Miles Wood. ... The Devils went 0 for 3 on the power play. The Penguins were 1 for 4 with the man advantage. ... Evgeni Malkin had two assists. His 29 points at home are tops in the NHL.

The teams continue their home-and-home set when they meet in New Jersey next Tuesday. The Devils are 5-1-1 at home in their last seven games against the Penguins.

Sidney Crosby
share story
those were the latest stories
Want to see more?
View All Stories
Fox Sports™ and © 2021 Fox Media LLC and Fox Sports Interactive Media, LLC. All rights reserved. Use of this website (including any and all parts and components) constitutes your acceptance of these Terms of Use and Updated Privacy Policy. Advertising Choices. Do Not Sell my Personal Info