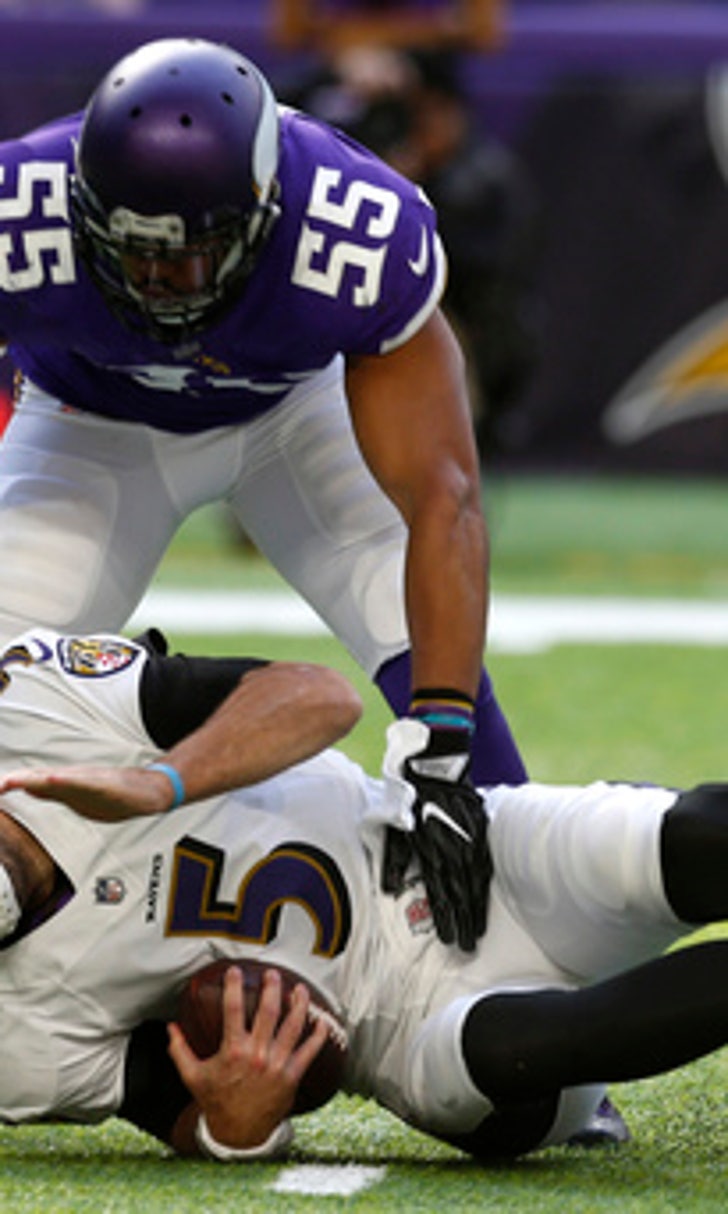 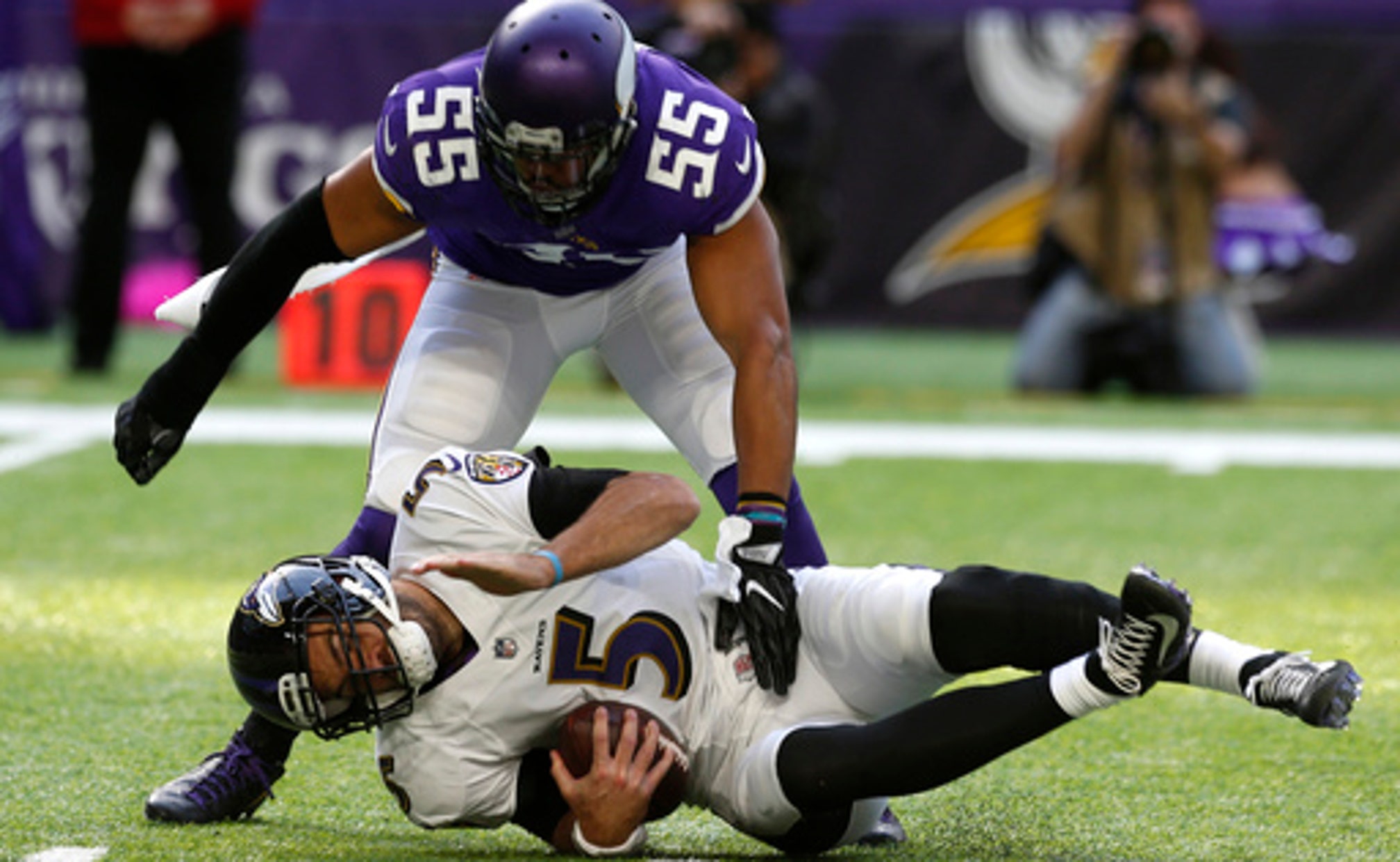 MINNEAPOLIS (AP) The Minnesota Vikings offense is down its starting quarterback, star rookie running back and best receiver.

With a defense like they have, the Vikings have not missed a beat.

Everson Griffen had two of Minnesota's five sacks and Latavius Murray rushed for 113 yards and a touchdown to help the Vikings to a 24-16 victory over the Baltimore Ravens on Sunday.

The Vikings (5-2) held the Ravens to 208 total yards and Kai Forbath kicked six field goals, including two of at least 50 yards. Griffen has nine sacks , including one in seven straight games to open the season. Former Purple People Eater Jim Marshall is the only other Viking to have a sack in each of the first seven games to start a season.

''He's just an all-day work for whoever he's playing against,'' Vikings coach Mike Zimmer said of Griffen. ''He's not going to take plays off. He's going to keep fighting and I think that's the biggest thing about him.''

Justin Tucker kicked three field goals for the Ravens (3-4), including a 57-yarder in the first half. Joe Flacco completed 26 of 38 passes for 186 yards, but a good chunk of his yards came in garbage time, including a 13-yard touchdown to Chris Moore as time expired.

''We went in here thinking they had a good defense, and we had a good defense,'' Flacco said. ''We knew that both teams saw each other in a similar fashion and felt we were going to be the offense to break through and score a couple touchdowns and get ourselves ahead. It didn't turn out that way.''

Eric Kendricks had 13 tackles, Anthony Barr had 11 stops and a sack and the Vikings moved into sole possession of first place in the NFC North a week after knocking Aaron Rodgers out for an extended period of time in a victory over division rival Green Bay.

''Chemistry is everything,'' Griffen said. ''We are paying close attention to details and we are running to the ball, giving extra effort, and we are doing our jobs at a high level.''

The short-handed Ravens were no match for Minnesota's swarming defense. Already missing receivers Jeremy Maclin, Breshad Perriman and Chris Matthews because of injuries, Mike Wallace was knocked out of the game with a concussion in the first quarter.

''We did not turn the ball over and that was a goal in this game,'' Ravens coach John Harbaugh said. ''What thought that would give us a chance. We didn't do enough of the other things we needed to do to win the game.''

Here are some other key developments from the game:

The Vikings signed Latavius Murray in the offseason to help them replace longtime star Adrian Peterson. But ankle surgery caused him to miss all of the offseason workouts and training camp and most of the preseason as well, putting him behind Dalvin Cook and Jerick McKinnon on the depth chart.

With Cook out for the season with a knee injury, Murray finally came through with 18 carries for 113 yards and the game's lone touchdown, a 29-yard burst in the third quarter.

He finished one short of Rich Karlis' single-game team record. ''I thought I hit it well,'' Forbath said of the errant kick. ''It's nothing I'm worried about.''

Wallace left the game in the first quarter after a vicious hit from S Andrew Sendejo. Wallace appeared to be knocked out cold by the shoulder-to-head hit that knocked his helmet off.

Wallace was able to walk off under his own power and was subjected to the league's concussion protocol.

Sendejo was penalized for unnecessary roughness, negating a forced fumble on the play. Wallace was later ruled out, but appeared to be arguing with coaches on the sideline about wanting back in.

''Once he went out we weren't able to really take any deep shots over the top of them for whatever reason, whether it was personnel or what they were giving us up front,'' Flacco said.

Ravens CB Brandon Carr made a brilliant play to nullify the momentum Minnesota had gained by a 46-yard punt return by Marcus Sherels in the first quarter. Case Keenum's first play was a deep ball to Laquon Treadwell, but Carr jousted with the 6-foot-2 receiver all the way down the field. Treadwell tried to keep the ball alive, but Carr snatched it out of the air for an interception .

The Vikings have a tradition of interviewing a former player on the field in the first half of every home game. Pro Bowl center Matt Birk, who went on to win a Super Bowl with the Ravens, was Greg Coleman's interview subject on Sunday and was asked what he would do if he was commissioner for a day.

''I'd do away with offensive holding, make sure every game was played on natural grass and make sure everybody stands for the national anthem,'' Birk said, drawing a huge cheer from the crowd.