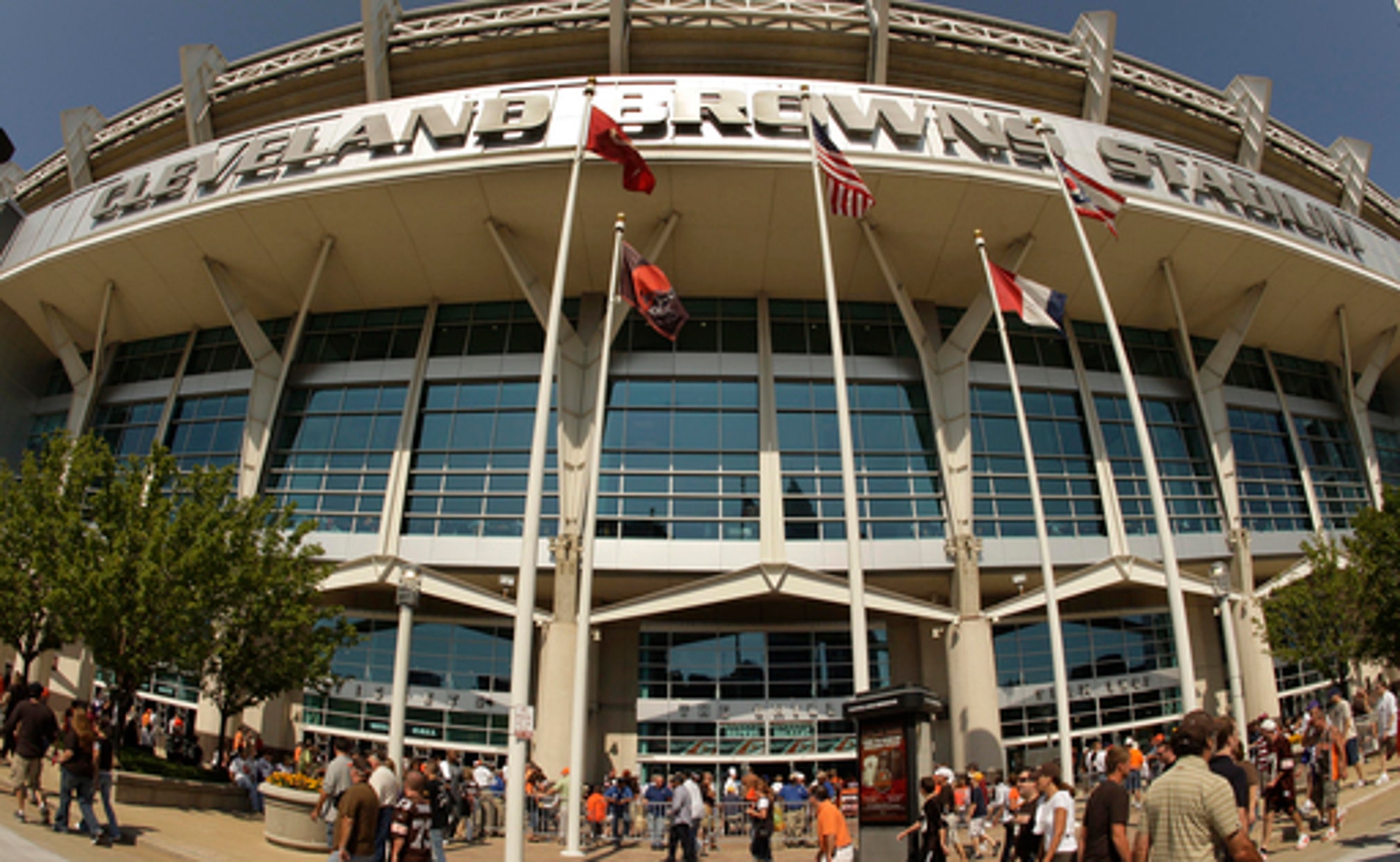 US buildings, NFL stadium check panels amid fears of fire

In promotional brochures, a U.S. company boasted of the ''stunning visual effect'' its shimmering aluminum panels created in an NFL stadium, an Alaskan high school and a luxury hotel along Baltimore's Inner Harbor that ''soars 33 stories into the air.''

Those same panels - Reynobond composite material with a polyethylene core - also were used in the Grenfell Tower apartment building in London. British authorities say they're investigating whether the panels helped spread the blaze that ripped across the building's outer walls, killing at least 80 people.

The panels, also called cladding, accentuate a building's appearance and also improve energy efficiency. But they are not recommended for use in buildings above 40 feet because they are combustible. In the wake of last month's fire at the 24-story, 220-foot-high tower in London, Arconic Inc. announced it would no longer make the product available for high-rise buildings.

Determining which buildings might be wrapped in the material in the United States is difficult. City inspectors and building owners might not even know. In some cases, building records have been long discarded and neither the owners, operators, contractors nor architects involved could or would confirm whether the cladding was used.

That makes it virtually impossible to know whether such structures as the Baltimore Marriott Waterfront hotel - identified by Arconic's brochures as wrapped in Reynobond PE - are actually clad in the same material as Grenfell Tower, which was engulfed in flames in less than five minutes.

At a Thursday news conference that followed the publication of The Associated Press' story on the use of the cladding material in the U.S., Cleveland's chief building official confirmed that panels on the city-owned Cleveland Browns' football stadium are ''similar if not identical'' to those used on the doomed London tower, but said they pose ''zero risk to the fans.''

Thomas Vanover said the panels were installed differently and the venue's overall cladding includes many materials.

''From these panels and this installation, there's no risk of anything remotely close to the Grenfell tragedy,'' Vanover said.

The International Building Code adopted by the U.S. requires more stringent fire testing of materials used on the sides of buildings taller than 40 feet. However, states and cities can set their own rules, said Keith Nelson, senior project architect with Intertek, a worldwide fire testing organization.

The National Fire Protection Association conducts fire resistance tests on building materials to determine whether they comply with the international code. Robert Solomon, an engineer with the association, told the AP that the group's records show the U.S.-made Arconic panels never underwent the tests. For that reason, he said, the group considered the products unsafe for use in buildings higher than 40 feet.

Solomon said the use of Reynobond PE on the Baltimore Marriott and Browns stadium in particular should be reviewed because of their height.

On buildings that are ''higher than the firefighters' ladders,'' incombustible material must be used, Arconic advises in a fire-safety pamphlet. It warns that choosing the right product is crucial ''in order to avoid the fire to spread to the whole building'' and that fire can spread extremely rapidly ''especially when it comes to facades and roofs.''

No one has declared the U.S. buildings unsafe, nor has the U.S. government initiated any of the widespread testing of aluminum paneling that British authorities ordered after the London disaster.

Arconic declined to give further details about the buildings in the brochure, and hasn't said how many U.S. buildings contain the product.

The company is cooperating with building owners and others involved, such as the Baltimore hotel, spokesman Steven Lipin said. The product is ''certified for use in the UK and US'' and the company ''will continue to be here to answer any questions about its products,'' Lipin said in a statement to the AP.

He did not indicate whether Arconic is contacting all the contractors, builders and others that used the material.

Baltimore City Housing Authority spokeswoman Tania Baker said the city doesn't keep detailed records of building materials but added that, if used, the material would have been compliant with local fire codes because the Marriott is equipped with sprinklers. Harbor East, a development company that owns the building, referred all inquiries to the Marriott, whose spokesman Jeff Flaherty said results of testing on the hotel's exterior panels could be received as early as this week.

''We can tell you that the hotel passed building inspection at the time it opened in 2001 and that the hotel's fire and life safety systems meet local code requirements,'' he said.

The Arconic website stated that the Browns stadium used 100,000 square feet of the bright silver aluminum composite material in its exterior.

One option for building owners who are unsure of the product's use would be to remove a section of paneling and have it tested at a lab, said Vickie Lovell, president of InterCode Inc., a consulting firm on building codes and standards.

Building records kept by cities can include construction blueprints, inspection logs and fire safety plans. But local agencies don't require that an applicant seeking a building permit submit a list of materials or specific products. In the case of the Marriott, Baltimore's housing department holds the building's original plans, which don't say what cladding was used.

The architect of record would have known what materials were used during construction. But Peter Fillat, an architect who worked on the 2001 Marriott construction, said he destroyed his records pertaining to the property six years ago because his contract requires him to keep files for only 10 years.

Construction and contracting firms that worked on the Marriott also said they no longer had those records.

For decades, the U.S. has required sprinkler systems to be installed in new high-rise buildings, as well as multiple ways for people to exit in the case of a fire. Grenfell Tower had none of those safeguards.

But fire safety experts caution that indoor sprinklers can't stop a fire that ignites on a building's exterior and spreads across the coating that encases it.

The danger is that ''the whole outside of your building could be on fire, yet the internal sprinkler heads may never activate!,'' Oklahoma fire safety consultant John Valiulis wrote in a 2015 research report on the flammability of exterior walls. He pointed to high-rise fires that began on building exteriors where indoor sprinklers were completely ineffective at stopping flames from racing up the outside walls.

Some of the buildings Arconic lists as using Reynobond PE:

Anchorage, Alaska: South Anchorage High School used 20,000 square feet of Reynobond Aluminum Cladding Material on the exterior of its science classrooms, according to Arconic's website. Anchorage Public Schools Superintendent Deena Bishop confirmed to the AP that the material was used at the high school. ''We are looking at options, studying it more, understanding what the risks are,'' Bishop said, adding that the cladding was installed according to code. ''Presently, we're finding that the use of it on single-story buildings is appropriate according to the manufacturer.''

Dallas: Arconic's website says Reynobond PE was used in Dallas-Fort Worth International Airport's 2-million-square-foot Terminal D facility, which opened in 2005. Reynobond PE formed the walls of the terminal's shopping and dining areas, the company's project report states. The panels were installed in parts of the interior and exterior of the terminal, airport spokesman Casey Norton said. ''We've been aware that we have these panels for a long time and it's part of the equation that we use every time we inspect the airport for fire safety,'' he said.

Detroit: Arconic's website reported 26,000 feet of the paneling was used in six Early Childhood Development Centers for the Detroit Public School System. Detroit Fire Marshal Gregory Turner said no specific buildings had been identified using the material applied to Grenfell Tower but that the city was continuing to investigate.

Denver: The top two floors of 1899 Wynkoop, a nine-story office and retail building in downtown Denver's historic warehouse district, were clad with the product to lighten its appearance and keep it from dominating the surrounding warehouses, Arconic advertises in promotional materials. About 13,000 square feet of Reynobond PE was used, the company said. Officials in Denver's community planning and development office have been looking into the matter, but haven't been able to locate the original building plans. ''Our expectation is that it was purged as part of our normal records retention process,'' spokeswoman Andrea Burns said in an email.