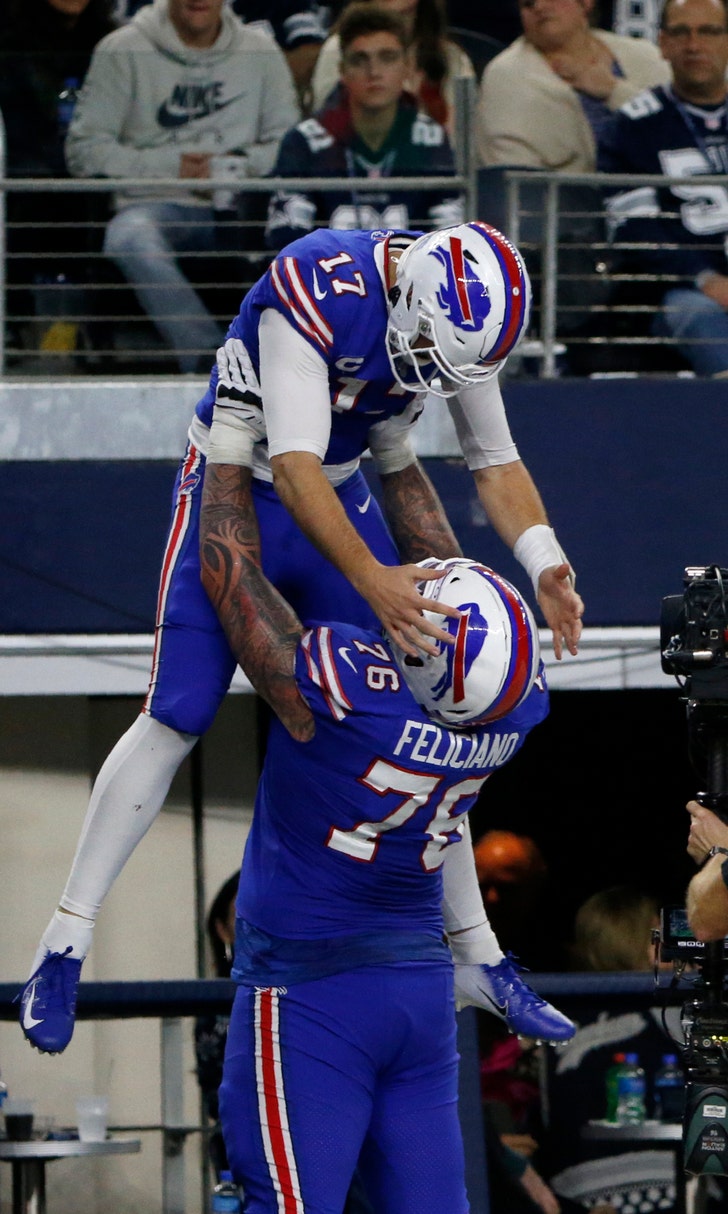 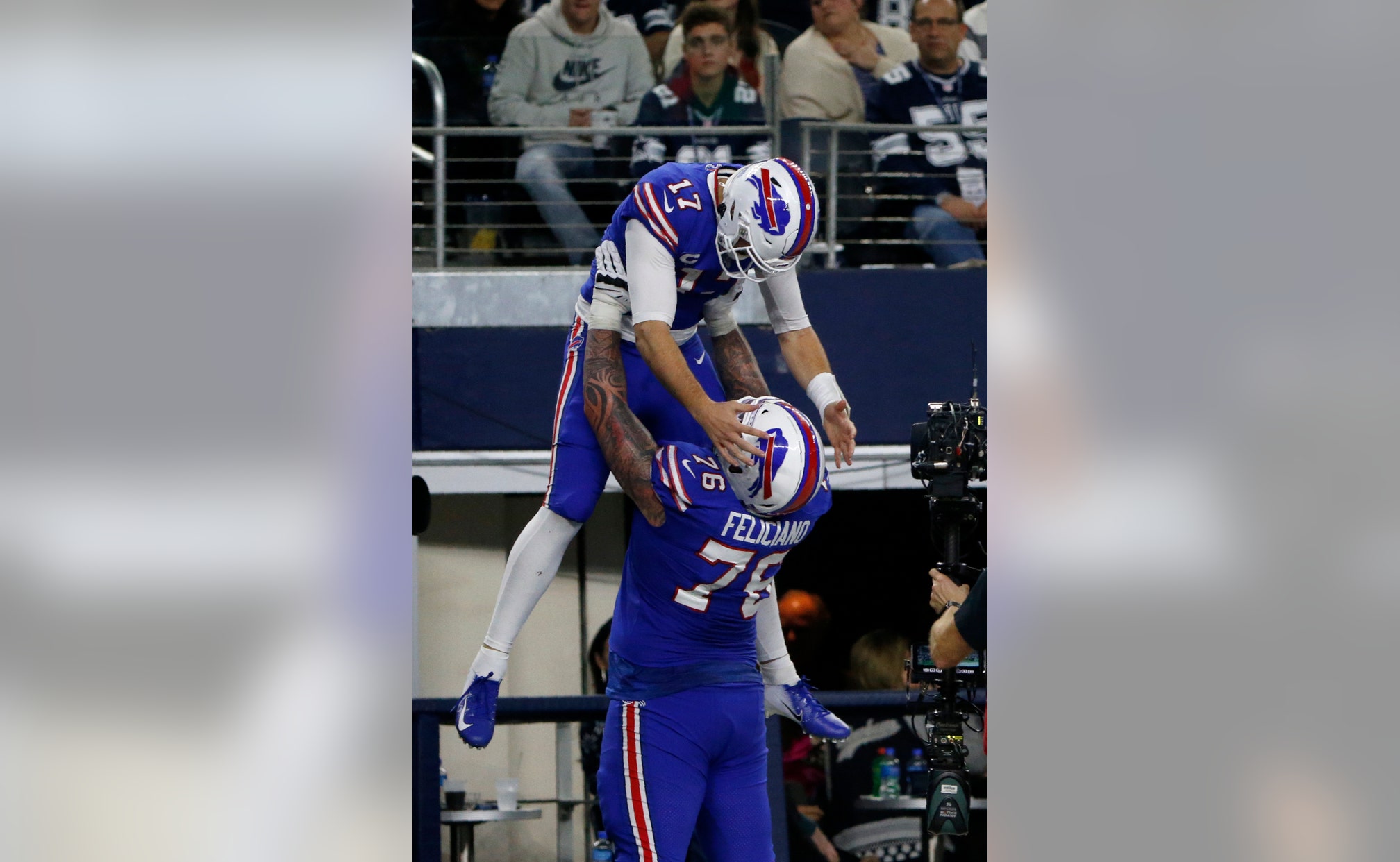 previous story
0 no more: What’s next for 1-win Bengals?
next story
USF hopes to have new coach before early signing day

Time to Bill-ieve? Buffalo in thick of AFC playoff race

ORCHARD PARK, N.Y. (AP) — It was only a few weeks ago when the Bills had a 7-3 record, and quarterback Josh Allen acknowledged he and his teammates had taken a peek at the playoff picture.

"I wouldn't say we've started talking about it, but you do want to keep an eye on what everybody else is doing," the second-year starter responded, before making a cautious projection. "At the end of the day, I think you need at least 10 wins to get in."

Two weeks and two wins later, the question for Allen now might be why stop there?

Returning from an extended weekend off following their convincing 26-15 win at Dallas on Thanksgiving Day, the Bills are in the thick of the AFC playoff race.

At 9-3, the Bills will play the two teams ahead of them in the standings over the next three weeks, starting with the conference-leading Baltimore Ravens (10-2) coming to town Sunday, and Buffalo playing at New England (10-2) on Dec. 21.

Coach Sean McDermott on Monday promptly cooled talk of having any AFC East title aspirations by saying he's solely focused on the immediate challenge ahead and noting how the dynamic Lamar Jackson-led Ravens might well be the league’s best team.

"They just can beat you in so many different ways," McDermott said of the Ravens, who have won eight straight and had outscored their previous five opponents by a combined margin of 202-62 before eking out a 20-17 win over San Francisco on Sunday. "I don't think there's really been a defense that's cracked the code to this point, so to speak."

And yet, McDermott appreciates the national attention the Bills are suddenly generating in having matched the team's best record through 12 games in 23 years.

The latest sign of respect came Sunday, when the NFL flexed Buffalo into its most prestigious TV spot by moving the Bills' game at Pittsburgh from a 1 p.m. start to prime time on Dec. 15. It will mark the first time Buffalo has played on Sunday night since a 56-10 loss to New England in 2007.

"We talk a lot about things being earned, and the guys have earned that. So, I don't think we shy away from that standpoint," McDermott said. "But we also know there's a lot of work ahead of us, a lot of runway to go yet."

Buffalo might still have much to prove, especially considering how it built much of its record by taking advantage of a soft early season schedule.

The perception toward the Bills, however, is beginning to change based on the dominance they've shown in winning three straight.

Allen, selected seventh overall in the 2018 draft and 25 spots ahead of Jackson, is finding his rhythm. He’s overseeing an offense that has combined for 1,204 yards and nine touchdowns — seven of them passing — in its past three.

The uptick in production coincides with coordinator Brian Daboll introducing a no-huddle dimension.

And Buffalo's defense has added a more attacking element by combining for 15 sacks over the past three games after managing just 22 in its first nine.

Bills players note there is also a difference between this year's team and the one that sneaked into the playoffs on the final day of the 2017 season by clinching the AFC's final wild-card berth only after Baltimore was eliminated by giving up a last-minute touchdown in a loss to Cincinnati.

"That was a whole different team," safety Micah Hyde recently said, noting how the roster was already in transition following the arrival of McDermott and general manager Brandon Beane earlier that year.

"It was kind of one of those seasons where we didn't know what to expect," said Hyde, one of 12 remaining holdovers. "I think going into this year, we expected to do something great. And that's still where our mindset is."

A win over Baltimore would have the Bills matching their best record through 13 games since 1991, which also happens to be the year Daboll turned 16 while growing up as a Bills fan in suburban Buffalo.

“Look, it’s good to play meaningful games in December. That’s our goal and that’s where we’re at,” Daboll said. “But again, I can’t stress enough how it’s a week-to-week proposition and against the best team in football right now.”

He shrugged when asked what he was doing in 1991.

“I have no idea,” Daboll said, before allowing a smile. “Cheering these guys on, I know that.”