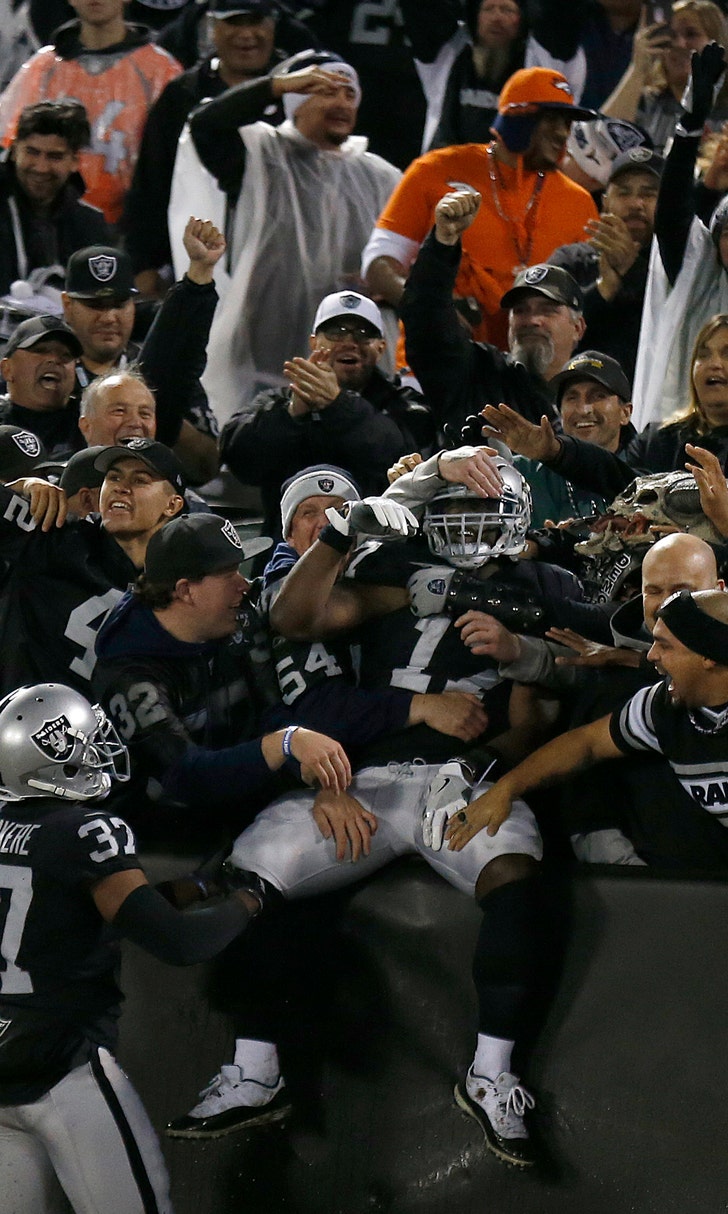 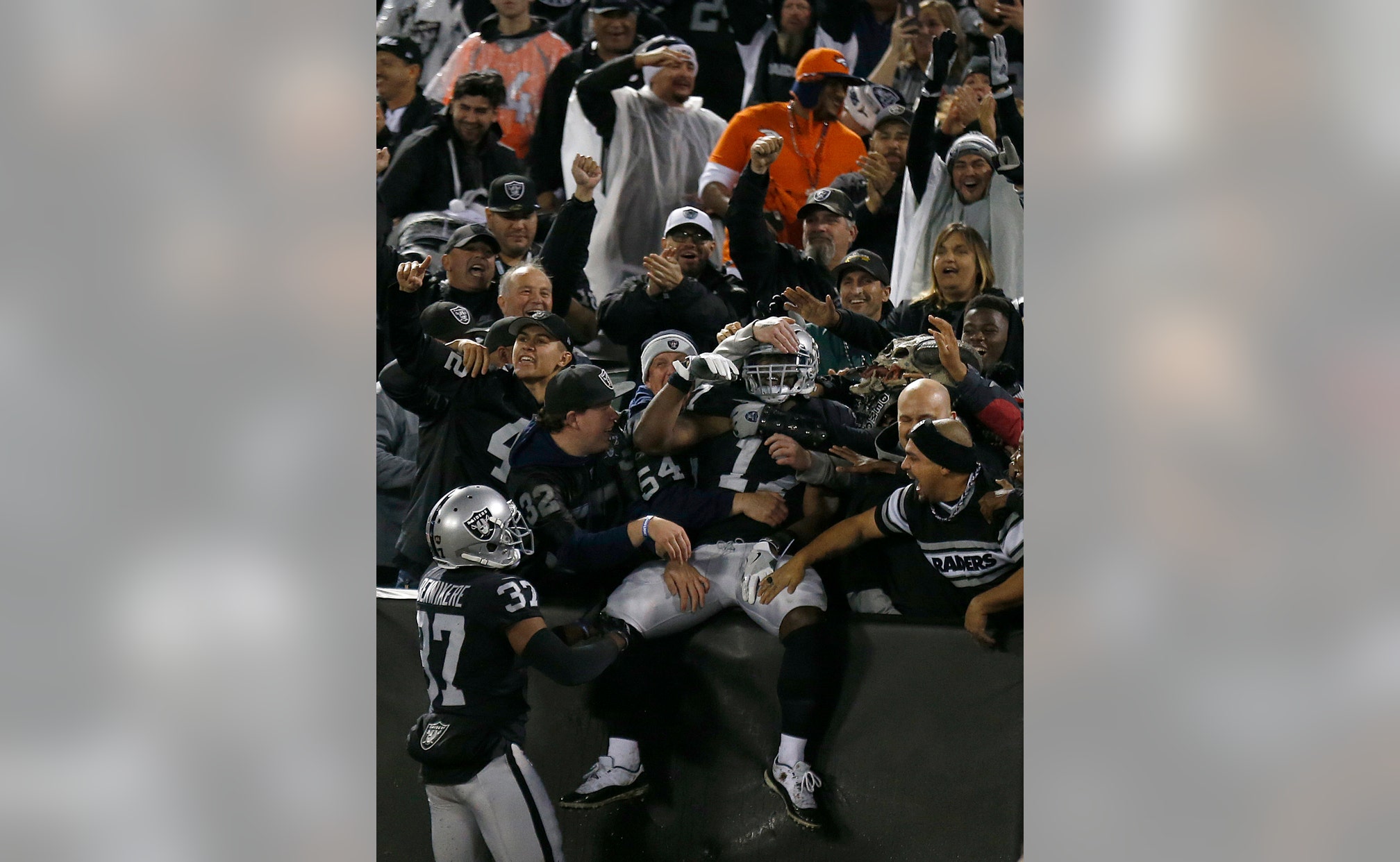 previous story
James sorry for posting rapper’s ‘Jewish money’ lyric
next story
BC gets play-caller back for bowl match with Boise, Rypien

OAKLAND, Calif. (AP) — After the final seconds ticked off, Derek Carr ran straight to the Black Hole with several teammates before taking a victory lap around the Coliseum to celebrate with his fans.

If this truly is the final game ever in Oakland, the Raiders gave their fans plenty to cheer at the end of another disappointing season.

Dwayne Harris returned a punt 99 yards for a touchdown after Denver failed to down it, Oakland native Doug Martin ran for 107 yards and a score and the Raiders beat the Broncos 27-14 on Monday night in what was possibly the final NFL game ever at the Coliseum.

"It was emotional because as I was doing it, I was remembering all the memories from breaking my ankle, to fourth-quarter comeback wins, to throwing three picks in a quarter. Everything," Carr said. "Just how loyal our fans are. I know it stings. I know it hurts that we might not play here. I don't know. I was going to make sure that if this was the last time, I wanted to say thank you in whatever way I could."

The Raiders (4-11) are set to move to Las Vegas in 2020 and have no lease for next year. With Oakland officials having sued the team over the move, the Raiders are looking into other options for 2019, including AT&T Park in San Francisco.

A decision is expected before the Super Bowl, but many of the die-hards came out for this game knowing it could be the last NFL game ever in the stadium that opened in 1966.

"I don't want to get too sentimental tonight," coach Jon Gruden said. "Hopefully that's not the case. That's for other people to decide. You see the love affair these fans have for the Raiders."

While the Raiders celebrated, the Broncos (6-9) hit a low after being assured of having back-to-back seasons with losing records for the first time since 1971-72. After going 5-11 in coach Vance Joseph's first season, Denver has done little better in year two and general manager John Elway could be ready to make a change after the season.

The Broncos opened the month with playoff aspirations, but three straight losses to teams that entered the game with losing records ended those hopes and have the team searching for answers.

"The message is to keep fighting," Joseph said. "That's what we do right now. We have one more game left and this team's fought all year."

Shortly after Oakland native Marshawn Lynch lit the torch in honor of late owner Al Davis before the game, Harris delivered the biggest highlight with a punt return that was tied for the second-longest ever.

Andre Holmes deflected Colby Wadman's punt just before it crossed the goal line and Isaac Yiadom was in position to down it at the 1. But he couldn't hold onto the ball and Harris picked it up before racing 99 yards down the sideline for the touchdown that stunned the Broncos. Only Patrick Peterson (99 yards) and Robert Bailey (103) have punt returns that long in NFL history.

"As soon as he touched it I knew I was going to try to return it if he had tried to throw it back," Harris said. "I've been trying to get that play all season. ... As soon as he did it I knew it was an opportunity for me to take advantage of it."

The Broncos weren't much better at the other phases of the game, committing pre-snap penalties, generating almost no consistent offense in the first half and then allowing Martin to scamper 24 yards untouched around the end to make it 14-0 midway through the second quarter.

"It was definitely important to me and to the players to give this win to (the Oakland fans) for Christmas," Martin said. "Merry Christmas to Oakland. Hope you enjoyed it. We love you."

Case Keenum got the Broncos on the board with a pair of TD passes in the second half to DaeSean Hamilton and Courtland Sutton. But it wasn't enough as Jalen Richard scored on a 3-yard run for Oakland and the Raiders sealed the win with interceptions by Marcus Gilchrist and Erik Harris.

Gruden threw his challenge flag after Keenum's 19-yard TD pass to Sutton, believing that Keenum crossed the line before the throw. But scoring plays are automatically reviewed and the replay booth confirmed the call without a stoppage. Oakland was charged with a timeout, the second time this season Gruden has tried to challenge a TD.

The Raiders came into the game allowing the most points per game in franchise history since 1961, but gave up nothing in the opening half against the Broncos. It's the third straight meeting between the teams where Denver failed to score in the opening half. Those are the only times in the past 90 games that Oakland has pitched a first-half shutout.

Broncos running back Phillip Lindsay passed the 1,000-yard rushing mark in the first half, joining Dominic Rhodes and LaGarrette Blount as the only undrafted rookies to top 1,000 in a season in the Super Bowl era. Lindsay ran for 46 yards before leaving with a wrist injury and as has 1,037 on the season. He needs 68 more to break Rhodes' record set in 2001 for Indianapolis.

Broncos: Host the Chargers on Sunday.

Raiders: Visit the Chiefs on Sunday.