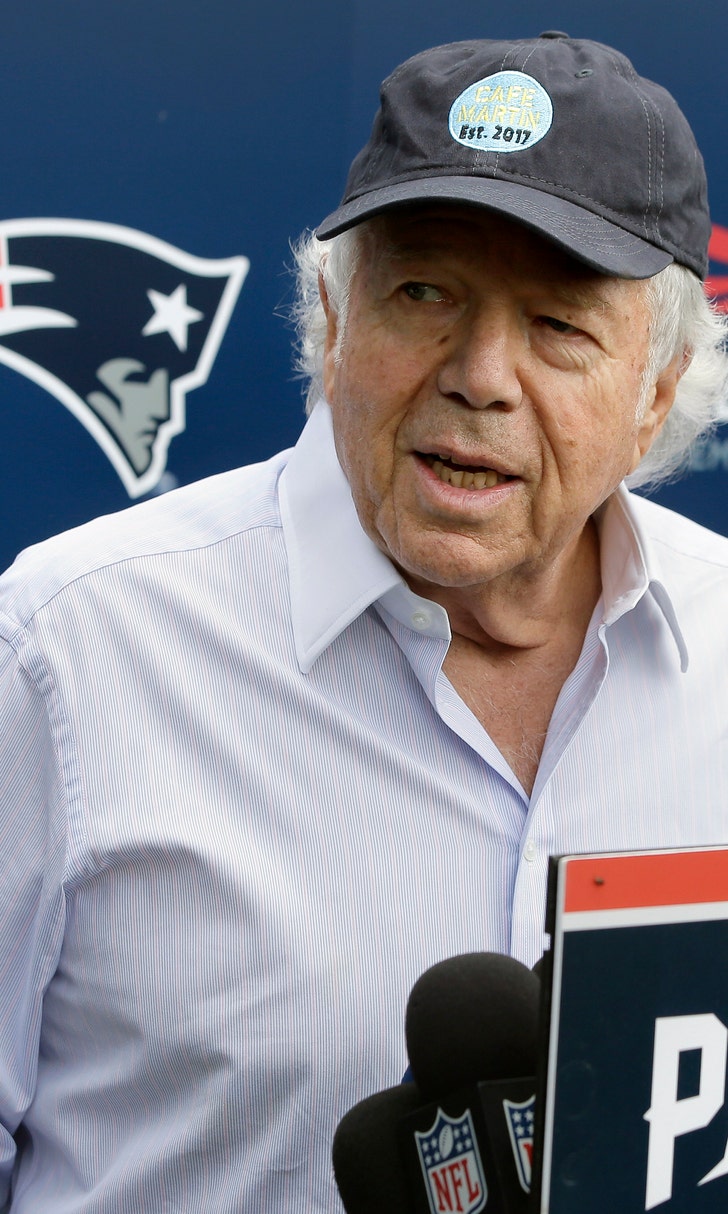 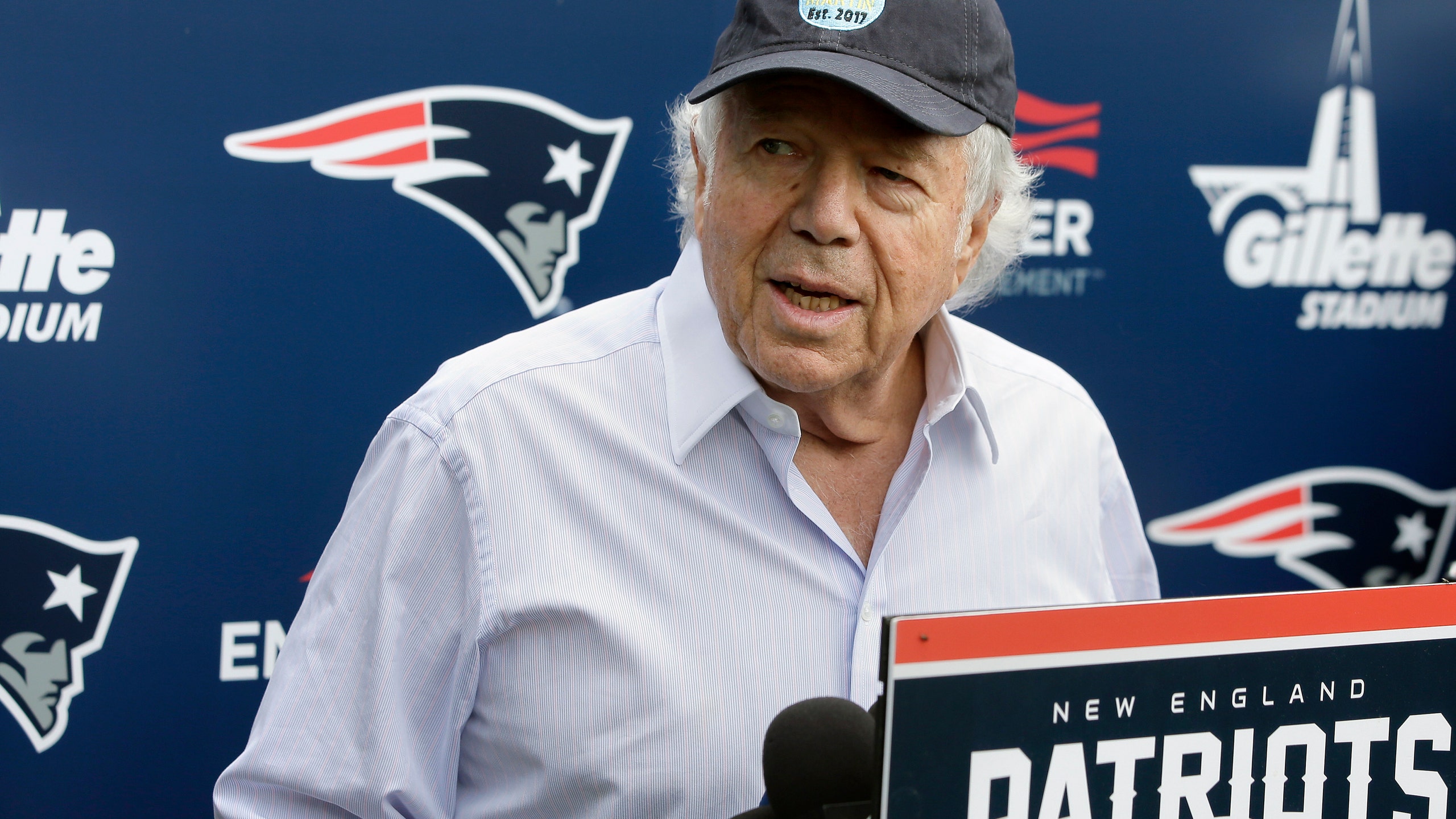 Misbehaving owners of sports teams have drawn headlines pretty much since sports have been around.

Now, New England Patriots owner Robert Kraft faces misdemeanor charges of soliciting a prostitute after police said he was twice videotaped paying for a sex act at a massage parlor in Florida amid a crackdown on sex trafficking.

He joins a list of current and former NFL owners accused of crimes or social misconduct.

Last year, Carolina Panthers owner Jerry Richardson sold the team after allegations surfaced of sexual and racial misconduct in the workplace. Following a six-month investigation by the league, he was fined $2.7 million. Richardson, the team's founder, then sold the franchise to David Tepper for $2.2 billion.

Cleveland Browns owner Jim Haslam had legal troubles while CEO of Pilot Flying J, one of the nation's largest truck-stop chains. Company executives either pleaded guilty or were convicted in a fraud scheme worth more than $50 million. Haslam claimed he didn't know about the scheme in which customers were underpaid on promised rebates for fuel purchases, and he was not charged.

Haslam bought the Browns in October 2012, six months before the FBI and IRS raided company headquarters. The NFL never disciplined him.

Jim Irsay, whose Indianapolis Colts won a Super Bowl for the 2006 season under his leadership, had acknowledged having a painkiller addiction in 2002 and sought treatment. The DEA investigated the case, but local prosecutors did not file charges.

Then, in March 2014, Irsay was arrested near his home in suburban Carmel and was held overnight after he failed sobriety tests and police found prescription medications in his car. The police said the drugs in Irsay's vehicle were not associated with any of the prescription bottles found inside. He was charged with operating a vehicle while intoxicated, along with four felony counts of possession of a controlled substance; police also found $29,009 in cash.

He again sought treatment and in September 2014 pleaded guilty to a misdemeanor count of driving while intoxicated, agreeing to undergo drug testing for a year. Irsay also admitted he was under the influence of the painkillers oxycodone and hydrocodone when he was arrested.

Ed DeBartolo Jr., who built the San Francisco 49ers' 1980s-90s dynasty with Bill Walsh as coach, was involved in one of the biggest owners' scandals in the sport's history. In 1998, he pleaded guilty to failing to report a felony when he paid $400,000 to former Louisiana Gov. Edwin Edwards in exchange for a riverboat gambling license.

DeBartolo was suspended from the NFL for one year in 1999 for his role in the gambling fraud scandal. He also handed over control of the team to his sister, Denise DeBartolo York, and never returned to the 49ers.

Former Philadelphia Eagles owner Leonard Tose had to sell the team in 1985 to pay off more than $25 million in debts to Atlantic City casinos.

Cincinnati Reds owner Marge Schott was sued by former employees during the days of the Big Red Machine for being a racist and, at one point, was quoted in The New York Times as saying Adolf Hitler initially was good for Germany; that her use of racially inappropriate words was in jest; and that she didn't understand why certain ethnically insulting words were offensive.

In 1993, Schott was suspended for one year by Major League Baseball and fined $25,000 for language that MLB's executive council deemed "racially and ethnically offensive."

Los Angeles Clippers owner Donald Sterling was fined $2.5 million and banned from the NBA for life in 2014 for racist comments he made to a friend. Sterling scolded her for posting pictures on Instagram in which she was accompanied by Basketball Hall of Famer Magic Johnson and Los Angeles Dodgers outfielder Matt Kemp, both black.

"Why are you taking pictures with minorities, why?" Sterling was recorded as saying. "Don't put him on an Instagram for the world to have to see so they have to call me. . And don't bring him to my games, OK? ... Yeah, it bothers me a lot that you want to promo, broadcast that you're associating with black people. Do you have to?"

The Rigas family owned the NHL's Buffalo Sabres in the late 1990s and early 2000s. It was forced to relinquish control of the team after indictments on bank and security fraud charges for raiding the coffers of their cable company, Adelphia. The Sabres played the 2003-04 season under NHL operation before being purchased out of bankruptcy by Thomas Golisano.

Last year, NASCAR's Brian France , whose family owns the stock car racing circuit and many of the tracks where it competes, was arrested in New York on charges of aggravated driving while intoxicated and criminal possession of a controlled substance. He immediately took a leave of absence and his uncle, Jim France, stepped in as chairman and CEO.

Perhaps the most documented misbehavior by a franchise owner occurred with George Steinbrenner of the New York Yankees.

A 15-count indictment was handed up in 1974 in Cleveland federal court for violations of election laws. Steinbrenner pleaded guilty to one count of conspiracy to make illegal campaign contributions, then was suspended by Commissioner Bowie Kuhn for two years. That suspension was lifted after 15 months for good behavior.

Steinbrenner frequently was fined for publicly criticizing umpires and for tampering. He was forced to resign as the team's managing general partner in 1990 for dealings with and a $40,000 payment to self-described gambler Howard Spira. Steinbrenner returned to his position on March 1, 1993.