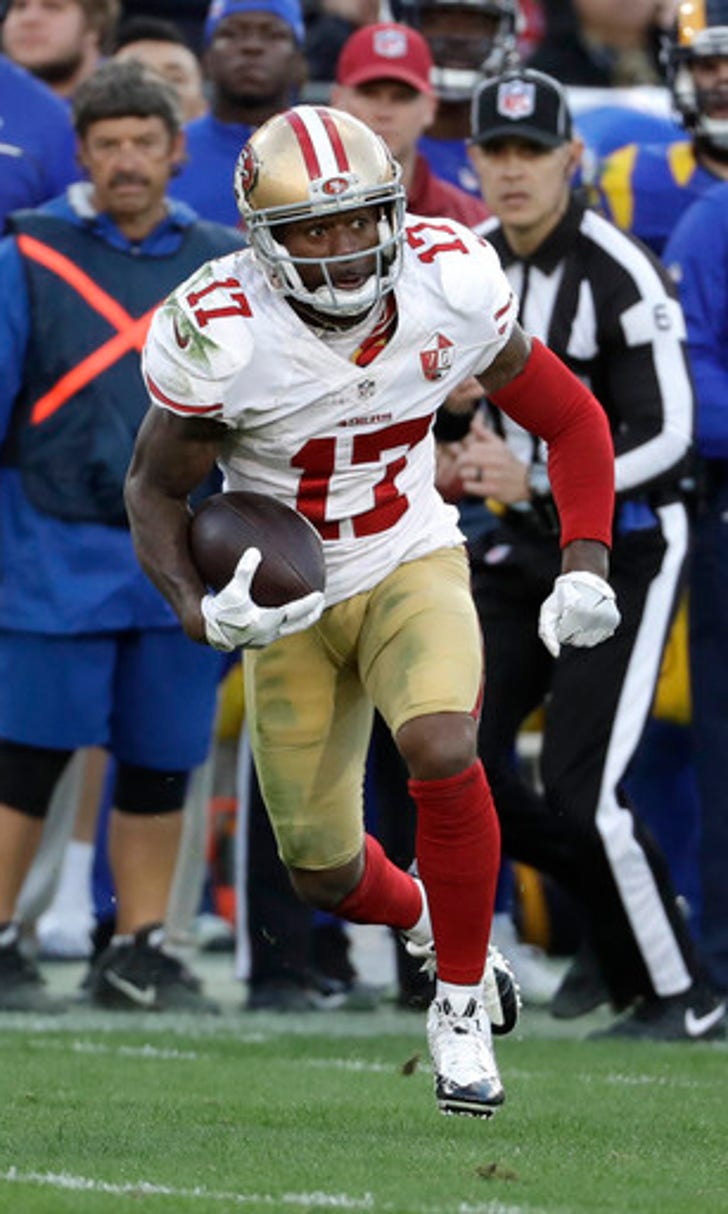 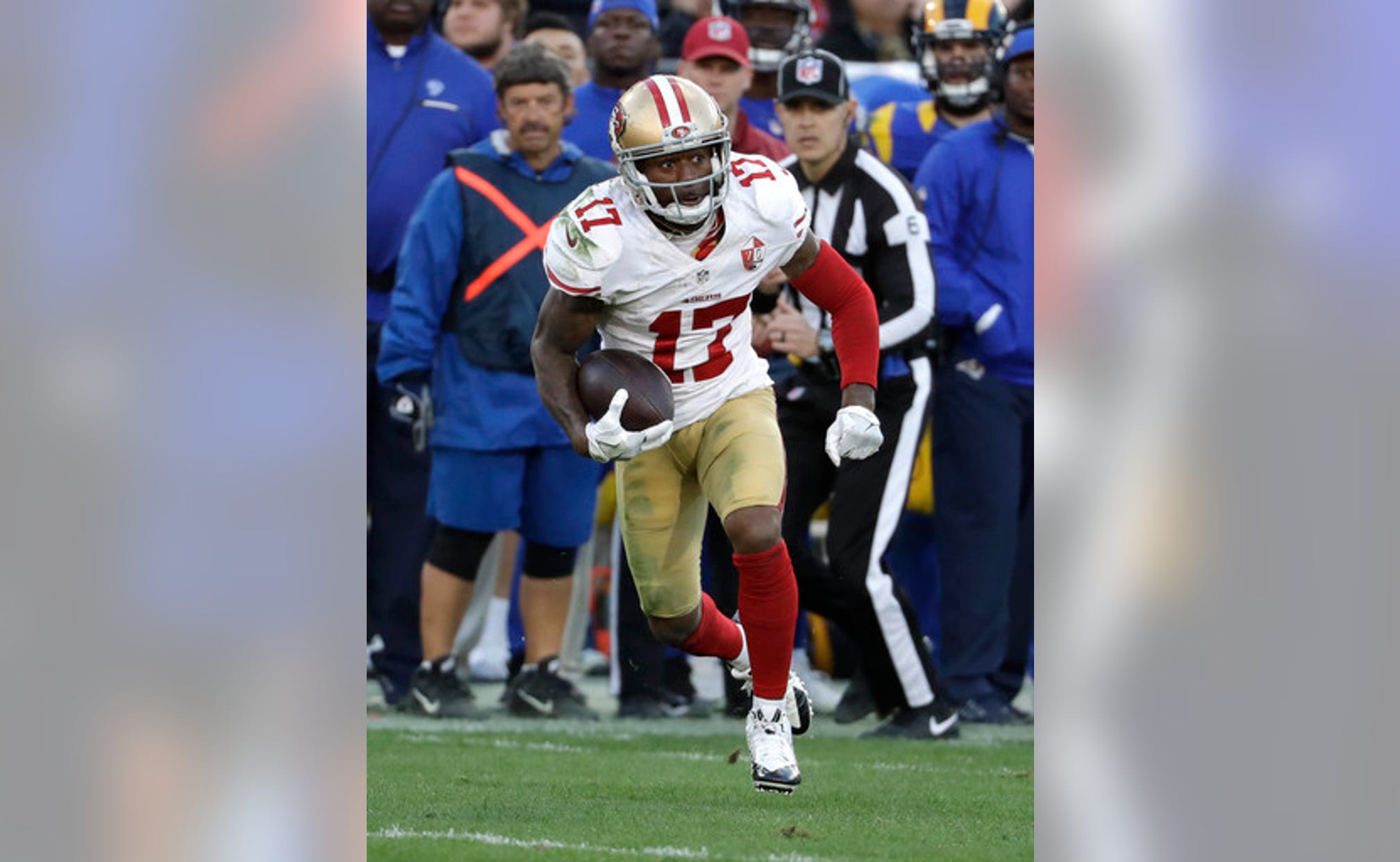 previous story
Browns spent '16 at NFL bottom, should be better in '17
next story
Stanford roomies ready to meet up when Panthers face 49ers

Kerley happy to be back with Jets - now that Gailey's gone

FLORHAM PARK, N.J. (AP) Jeremy Kerley had his sights set on returning to the New York Jets the moment he was cut by the San Francisco 49ers.

The veteran wide receiver got on his phone and immediately called Todd Bowles to tell the coach he wanted to come back. Then, Kerley started making calls and sending texts to anyone who'd listen to his desires for a reunion in green and white.

''I was on my phone, looking for every Jets contact I had,'' a smiling Kerley said Wednesday after his first practice back with New York. ''I was trying to hit up everybody.''

Kerley was signed Tuesday to a one-year deal , reuniting with the team for which he played his first five NFL seasons.

''I didn't want to be nowhere else,'' said Kerley, who still had his home in New Jersey. ''This was the place I felt most comfortable with. It was kind of a perfect fit for my family, as far as the people in the building and the environment. Besides, I know this team wants to win and I know they want to prove a lot of people wrong right now, and that's something I want to be a part of.''

Kerley was a fifth-round pick of the Jets out of TCU in 2011 and led the team in receptions in 2012 and 2013. He made a reputation of being one of the game's clutch slot receivers on third downs and was also the team's primary punt returner.

But he fell out of favor in New York's offense under coordinator Chan Gailey, barely seeing the field during the 2015 season. He finished with a career-low 16 catches for just 152 yards.

Kerley was released in March 2016, less than 17 months after he signed a 4-year, $16 million contract extension.

He signed with Detroit, which traded him to San Francisco before last season. He went on to catch a career-high 64 passes, but was cut by the 49ers last Saturday .

''I wasn't that surprised,'' Kerley said. ''The NFL's a crazy business. Anything can happen.''

With Gailey retired and John Morton taking over as the Jets' offensive coordinator and running a West Coast-style system, Kerley knew where he wanted to go next.

''Chan had his things he wanted to go with, so it's a better opportunity, I guess, because it's a different person here,'' Kerley said. ''I'm just eager to get started and do what I do.''

Kerley said during an interview with Sirius XM NFL Radio in June that he ''hated the NFL'' because of his last experience with the Jets and how things ended. He also said he didn't have a lot of respect for Gailey and ''it was probably the same for him.''

Bowles explained that the Jets were ''an outside passing team'' in 2015 with Brandon Marshall and Eric Decker seeing most of the targets. Meanwhile, the 5-foot-9 Kerley became an afterthought in the offense.

''We were more play-action and we needed bigger receivers,'' Bowles said. ''Therefore, not that he couldn't play, he just didn't fit in the scheme we were running. Now that we're bringing him back in the scheme we're running, we have a little different game plan on how we want to use the slot receiver, and he fits that role.''

He stepped back into the Jets' receiving corps as their most experienced player at the position with 246 catches. Kerley joins recently acquired Jermaine Kearse in an offense that has gone through some massive renovations over the last several months.

''They're pros, that's the great thing,'' quarterback Josh McCown said about Kerley and Kearse. ''You get those guys in here and it's like they've been here for a while. They assimilate to the system very quickly, so it will be fun utilizing them.''

Kerley isn't sure how much he might play in the Jets' season opener Sunday at Buffalo. He's still getting re-acclimated and doesn't want to make any assumptions or predictions about his role or playing time.

He does know, however, that he's ready to make plays again for the Jets.

''I feel I play good after adversity,'' Kerley said before breaking into a slight smile. ''So maybe I should get let go a lot more.''