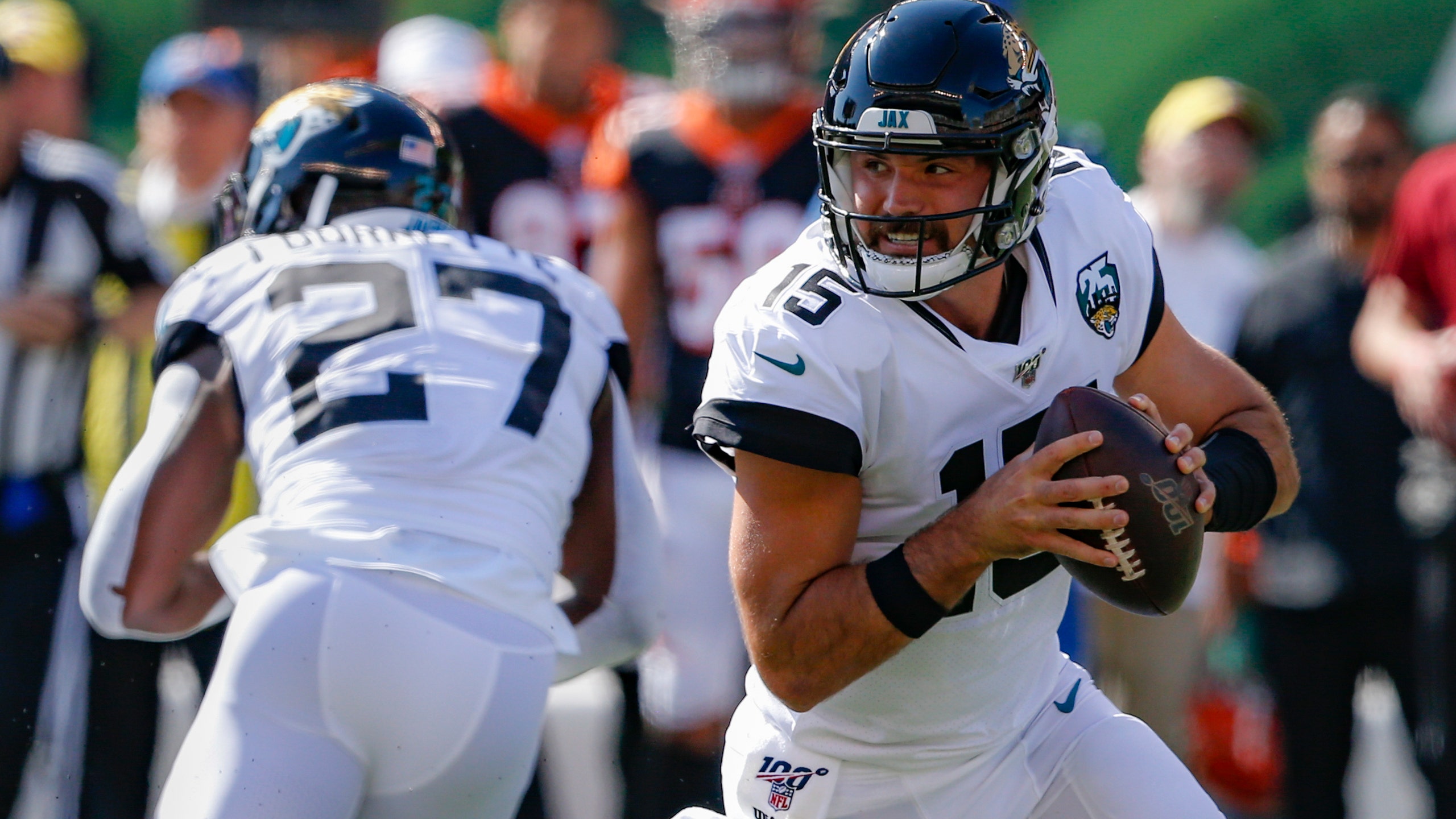 Jaguars' Minshew running out of time to secure starting job

The rookie sensation has been rather ordinary the past two games, completing 47.5 percent of his passes for 418 yards, with a touchdown and an interception. He also was sacked four times.

He came up big, though, in the fourth quarter of Sunday's 27-17 victory at winless Cincinnati. He tossed a 2-yard touchdown pass to Keelan Cole that put the Jaguars ahead for good. It was Jacksonville's lone touchdown in six trips inside the 20-yard line.

Minshew completed 15 of 32 passes for 255 yards, a better performance than what he showed the previous week against New Orleans.

But the two-week stretch has mostly silenced the Minshew Maniacs clamoring for Jacksonville to keep Nick Foles on the bench.

Foles will return to practice this week and is eligible to play Week 11 at Indianapolis, following a bye. The 30-year-old veteran broke his left collarbone 10 plays into the season opener.

"We'll kind of gradually bring him back in there," coach Doug Marrone said Monday. "I just want to make sure we're good with the reps and building it up, not doing too much too fast. ... We don't want a lot of people around him. We'll be smart this week and see how it progresses."

Foles signed a four-year, $88 million contract in March that included $50.125 million guaranteed, a big reason why Marrone is unlikely to stick with Minshew.

The Jaguars host the New York Jets on Sunday.

Jacksonville's defense allowed 291 yards, with 134 of those coming in the fourth quarter, and forced a season-high four turnovers against the Bengals.

It was the unit's fourth stout showing this season and second in as many weeks. The Jaguars held the Saints to a lone touchdown in a 13-6 loss last week.

Nonetheless, it had to sting to see former Jaguars cornerback Jalen Ramsey making game-changing plays for the Los Angeles Rams and knowing how much better Jacksonville's D would be with him. But second-year pro Tre Herndon continues to improve, and the Jags should have a lot less drama on the field and in their locker room moving forward.

The Jaguars are last in the NFL in red-zone efficiency, scoring eight touchdowns in 24 drives inside the opponents' 20-yard line.

They have just one touchdown in their past eight red-zone trips, mostly settling for short field goals. Marrone said he needs to do a better job of finding plays that Minshew feels comfortable running in the all-important area.

"Situationally, I always thought that was one of the tougher things for young quarterbacks coming in, especially right from college," Marrone said. "Things happen so fast and so quickly down there."

Defensive tackle Taven Bryan had one of his best games in two years.

The second-year pro, a first-round draft pick from Florida in 2018, stopped Joe Mixon for a loss and later split a double team that resulted in a turnover. His pressure caused Andy Dalton to throw early, leading to Yannick Ngakoue's game-sealing interception return for a score.

It was progress for Bryan, who is expected to start in 2020.

Rookie tight end Josh Oliver made his NFL debut Sunday, but wasn't targeted in the passing game. Oliver played 25 snaps, most of them in two-tight end sets.

"We've got to look for ways to get him involved in the passing game," Marrone said.

Oliver should continue to get chances, especially considering the Jags have one of the least-productive tight end groups in the NFL. James O'Shaughnessy (knee) is out for the season, and Geoff Swaim (concussion) is expected to miss a few weeks.

"We'll probably bring in some guys just to make sure we're working out in case some of these guys are out a little bit longer," Marrone said.

13 — points off turnovers for the Jaguars against Cincinnati, more than what they had in the season's first six games.

Must improve red-zone efficiency (32nd in the league) and third-down conversation rate (27th).