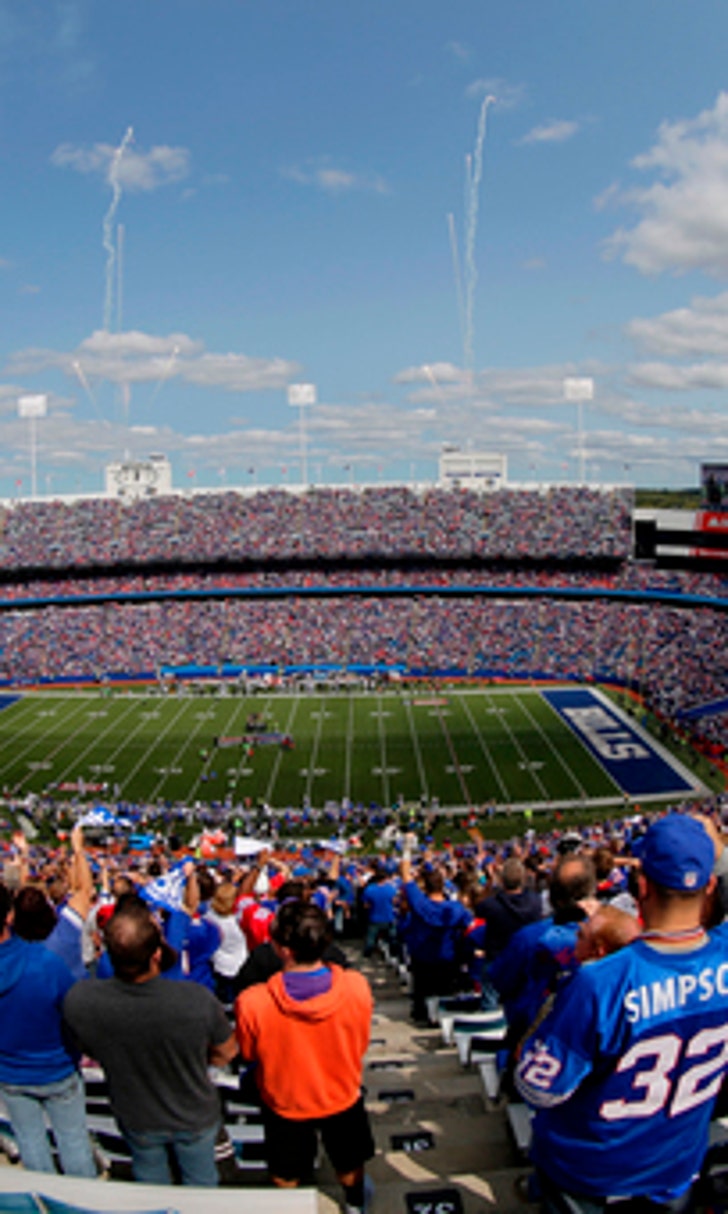 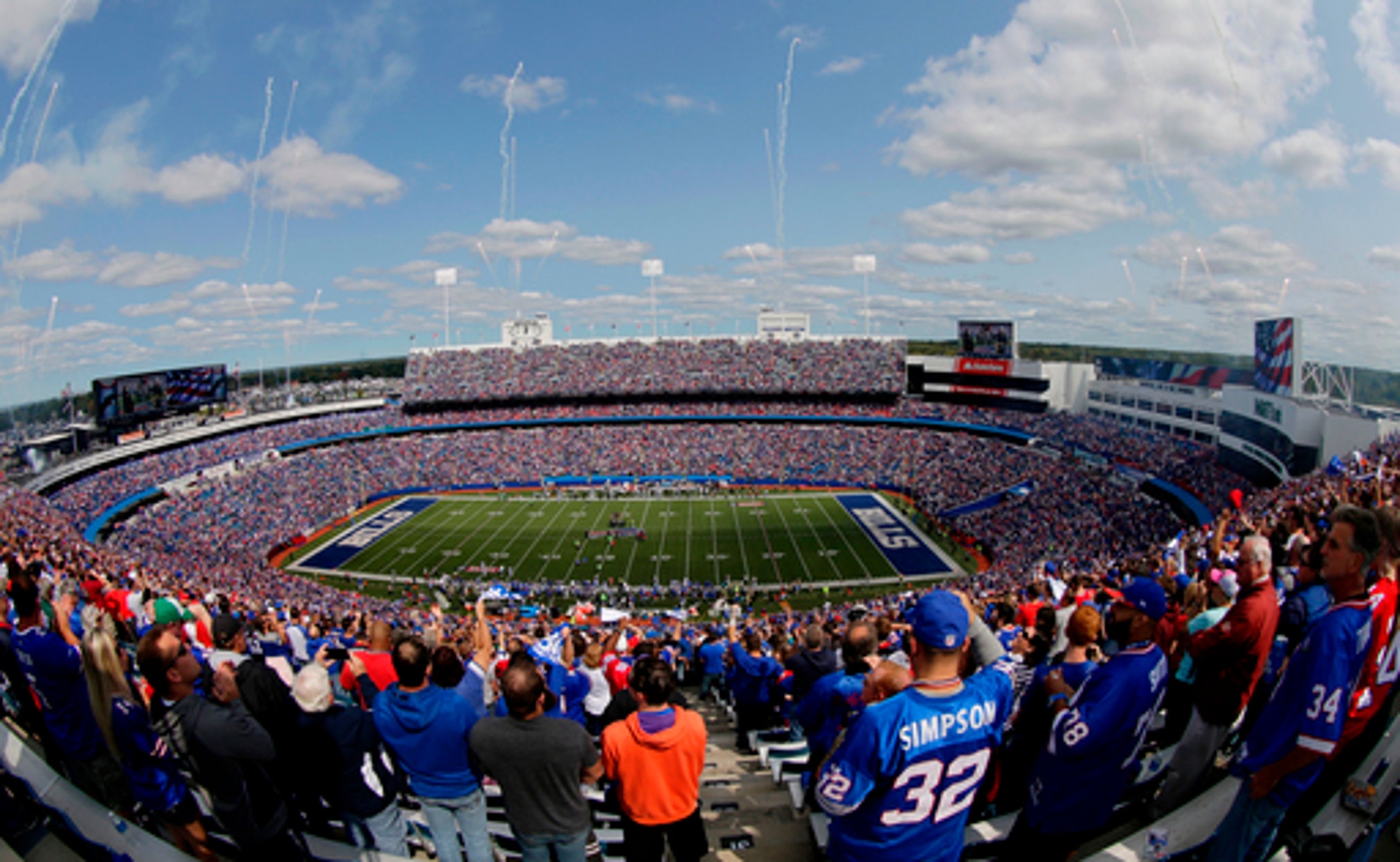 BUFFALO, N.Y. (AP) The Buffalo Bills' long-term future in western New York was secured when Terry and Kim Pegula purchased the franchise following the death of Hall of Fame owner Ralph Wilson in 2014.

Where the team will play its home games - at its current stadium in suburban Orchard Park or at a new downtown Buffalo facility - within the next decade is the question.

NFL Commissioner Roger Goodell touched on the topic at league meetings in Florida on Wednesday by saying the Pegulas are ''at a very early stage'' in assessing their options. Goodell then left the details to be announced by the owners when they are ready to share them with the community.

On Tuesday, Terry Pegula said, ''We talk about that heavily internally, but not publicly,'' when asked if the Bills would consider using the opt-out clause in their lease in two years to explore a new stadium site.

The Bills later clarified Pegula's comment by saying he was referring to long-term stadium plans and adding that the team had no plans to opt out of the lease, which expires in the summer of 2023.

The Bills maintain they are early in their planning process and have not ruled out any option. They're also aware that time will become an issue in determining whether the next lease negotiations will focus on a long- or short-term agreement.

The questions come down to building a new stadium, either downtown or near the Bills' existing site; renovating their current home, New Era Field; and how much public money would be spent.

One possibility is pairing a new stadium and Buffalo's need for a new convention center, which would ease concerns over taxpayer money being spent on a stand-alone sports facility.

A stadium site selection study conducted by AECOM Technical Services in 2014 projected it would cost $540 million for the next series of renovations, including structural improvements and rebuilding the stadium's third deck. The study based its estimates on what it cost the Green Bay Packers and Kansas City Chiefs to extensively renovate their facilities over the previous decade.

And that cost is on top of the $130 million in renovations that took place four years ago, and the $18 million the Pegulas are spending on club seat upgrades this year.

The next step would involve the Bills hiring a firm to conduct a feasibility study to identify sites, costs and what best suits a franchise based in one of the NFL's smallest markets.

The AECOM study was commissioned by New York state - not the Bills - at an uncertain time during the sale process. Concerned that someone out of town would purchase the Bills and consider relocating them, Gov. Andrew Cuomo had the study conducted to provide prospective owners a list of options of what the region had to offer.

The relocation fear ended once the Pegulas, who own the NHL's Sabres and have established a corporate base in Buffalo, emerged as the front-runners.

The AECOM study can at least still serve as a guide.

Of the three downtown stadium sites identified, one is no longer an option because it has since been developed.

The site that drew the most attention is a large two-block parcel of street-level parking lots located in the city's emerging Cobblestone entertainment district. The site is located a block east of the Sabres' arena and within two blocks of HarborCenter, a $200 million hotel and hockey entertainment facility built by the Pegulas, and the headquarters of Pegula Sports and Entertainment.

One person directly involved in discussions three years ago, after the Pegulas purchased the team, told The Associated Press in January that the Bills were focused on building a downtown stadium, and that the Cobblestone site was regarded as ''one of the prime target areas.'' The person spoke on the condition of anonymity because the talks were private.

It's unclear whether those plans have changed.

At the time, the state was tentatively committed to funding the necessary infrastructure upgrades, such as expanding roadways and access ramps from nearby Interstate 190. The site is also close to public transportation. It's a five-minute drive from the Peace Bridge border crossing into southern Ontario, a few blocks from the Amtrak Rail station, and within about 15,000 parking spaces.

Developer Carl Paladino, who owns a large number of properties in the area, called the Cobblestone site ''the most logical place to put it (a stadium),'' in an interview with the AP in January.

Kim Pegula outlined the challenges the Bills faced during an interview with the AP in 2014.

The Pegulas have since backed off discussing stadium plans by calling them premature, and added they're satisfied with the most recent renovations.