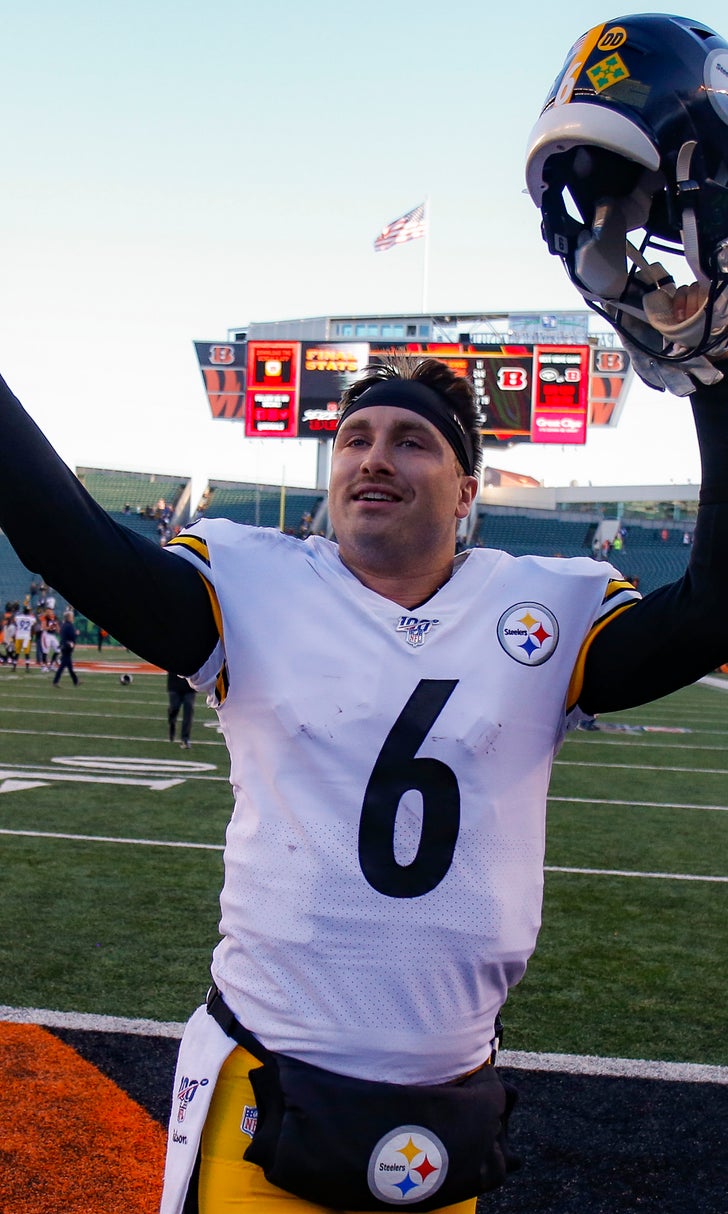 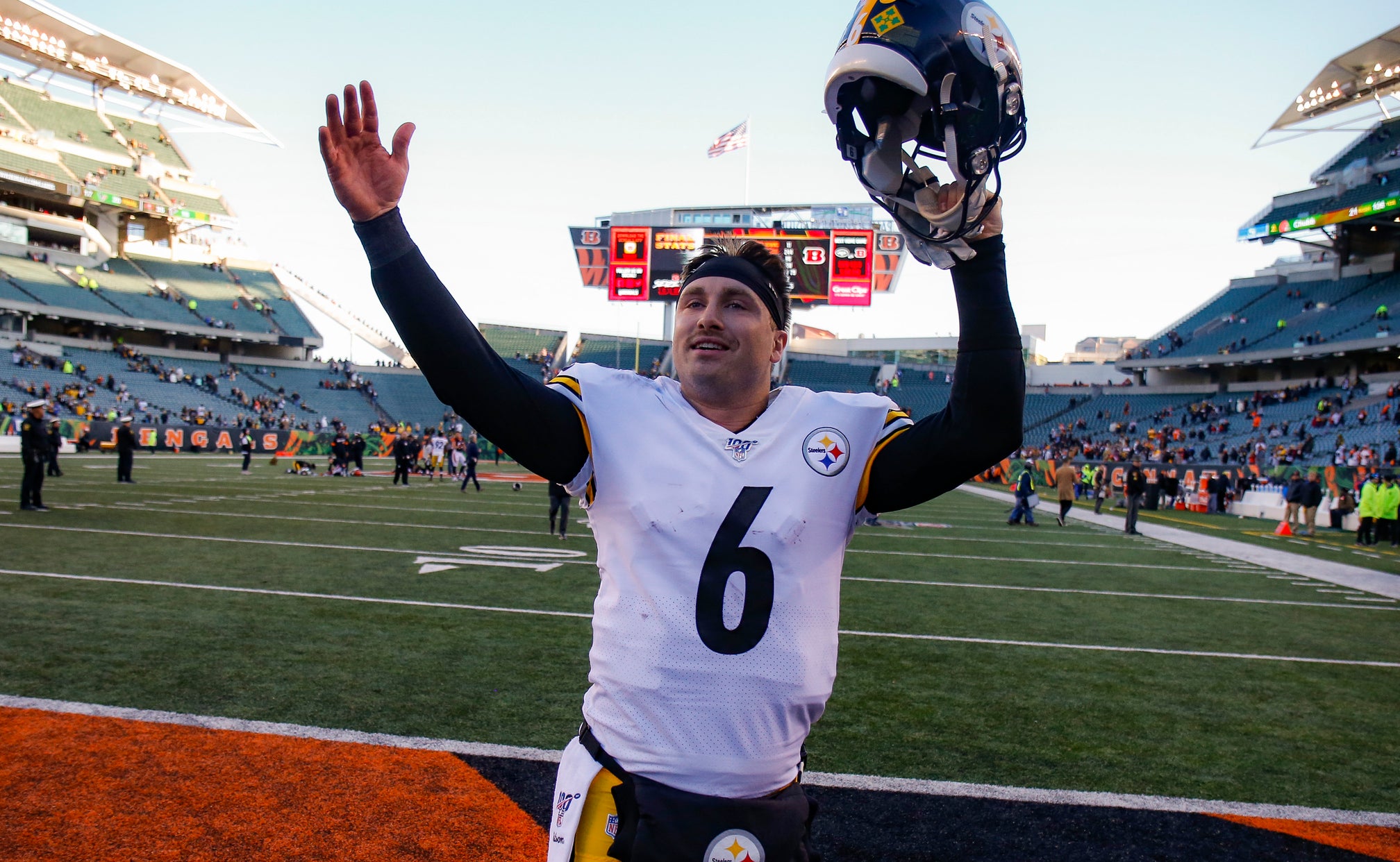 PITTSBURGH (AP) — Mason Rudolph has the pedigree and the pressure. Devlin Hodges has the charisma and the confidence.

And their head coach has a very important decision to make between the two young quarterbacks before the Pittsburgh Steelers face the Cleveland Browns next Sunday, one that could have a ripple effect on the club through the rest of this season and beyond.

Though Mike Tomlin hinted he may have already made up his mind after Hodges replaced an ineffective Rudolph in the second half of a borderline unwatchable 16-10 victory over Cincinnati that pushed Pittsburgh’s record to 6-5 and kept the injury-ravaged Steelers in the AFC playoff chase, the fact he’s mulling a change heading into December symbolizes a season unlike any other in Tomlin’s 13-year tenure.

Tomlin expressed sarcastic disbelief last month when asked if Rudolph was still atop the depth chart after Hodges filled in capably during a road win at the Los Angeles Chargers on Oct. 13, a victory Rudolph watched from the sideline while recovering from a horrifying concussion suffered against Baltimore the week before.

“Seriously guys?” Tomlin said at the time, making no attempt to hide his exasperation.

The question isn’t absurd anymore. It’s pivotal. And factors that will play into the answer are equal parts pragmatic and political.

When the Steelers traded up to select Rudolph in the third round of the 2018 draft, general manager Kevin Colbert made it a point to note the Steelers had a first-round grade on Rudolph following a record-setting career at Oklahoma State.

And while they downplayed the idea Rudolph would be Roethlisberger’s eventual successor, they also saw enough progress between his first and second seasons to name him the primary backup and trade Josh Dobbs to Jacksonville in early September.

The move also opened the door for Hodges — an undrafted rookie free agent out of Samford who impressed during the summer before getting caught up in a numbers game — to return. Fast forward nearly three months and the gap between Rudolph and the player known universally as “Duck” (a tribute to his days as a champion duck caller back home in Alabama) has vanished completely.

Rudolph has 4 inches and 25 pounds on Hodges and Pittsburgh’s investment in his development is not insubstantial. Yet he’s also been unable to get the Steelers to move the ball with any consistency, though he’s hardly the only one to blame on an offense that’s on track to be Pittsburgh’s worst in 30 years. The running game has been largely nonexistent while facing seven and eight-man fronts designed to force Rudolph — or whoever is at quarterback — to throw the ball.

While he struggled to get anything going downfield, Rudolph mostly avoided mistakes during his first six starts. That changed on Nov. 14 against Cleveland, when he threw four picks, was sacked four times and ended the game by getting into a fight with Browns defensive end Myles Garrett that ended with Garrett slugging Rudolph in the head with Rudolph’s own helmet.

The aftermath scarred the reputation of both players forever. The NFL banned Garrett indefinitely and Rudolph — who was fined but not suspended — found himself fending off an accusation by Garrett that Rudolph used a racial slur that set Garrett off.

Rudolph stressed the brawl and the fallout had nothing to do with his shaky performance against the winless Bengals, when he completed just 8 of 16 passes for 85 yards and an interception. Hodges came on in the third quarter and hit James Washington for a 79-yard touchdown on his third snap. While Hodges was decidedly “meh” otherwise, it didn’t matter. His one big throw changed the momentum and that was enough.

“Whenever my number is called, I want to be ready,” Hodges said.

If Tomlin turns to Hodges against the Browns (5-6), it would potentially remove a combustible element to a powder keg of a rivalry. It might also give the Steelers a better chance to win. In the short term at least. It could also further erode Rudolph’s already shaky confidence, affecting his long-term prospects of sticking around. He’s never been benched for poor play before.

Maybe Tomlin thinks it’s a one-off. Or maybe he’s seen enough to know it’s Duck Season for the rest of the season.

“We’re just all rowing together,” Tomlin said. “You’ll make more out of Duck’s contributions than need be, but so be it. It comes with the position. They get too much credit at times, and they get too much blame at times.”

Rookie linebacker Devin Bush continues to make plays around the ball. He was involved in his seventh takeaway of the season when he stripped Cincinnati wide receiver Tyler Boyd in the fourth quarter with Boyd racing toward the end zone for what would have been a go-ahead touchdown.

The red-zone offense is still a mess. Pittsburgh failed to score touchdowns on two trips inside the Cincinnati 20, settling for field goals that kept the Bengals within striking distance.

Washington’s 79-yard catch-and-run showcased the big-play ability he’s only shown in occasional flashes since being taken in the second round in 2018.

The offensive line that allowed 11 sacks through nine games has now surrendered seven over the past two.

Wide receiver JuJu Smith-Schuster has a chance to play against Cleveland after sitting out with a knee injury against Cincinnati.

15. The number of consecutive victories by the Steelers over the Browns at Heinz Field.

Protecting the quarterback and taking better care of the ball than they did against Cleveland two weeks ago in a rematch that could determine the playoff chances for both teams.