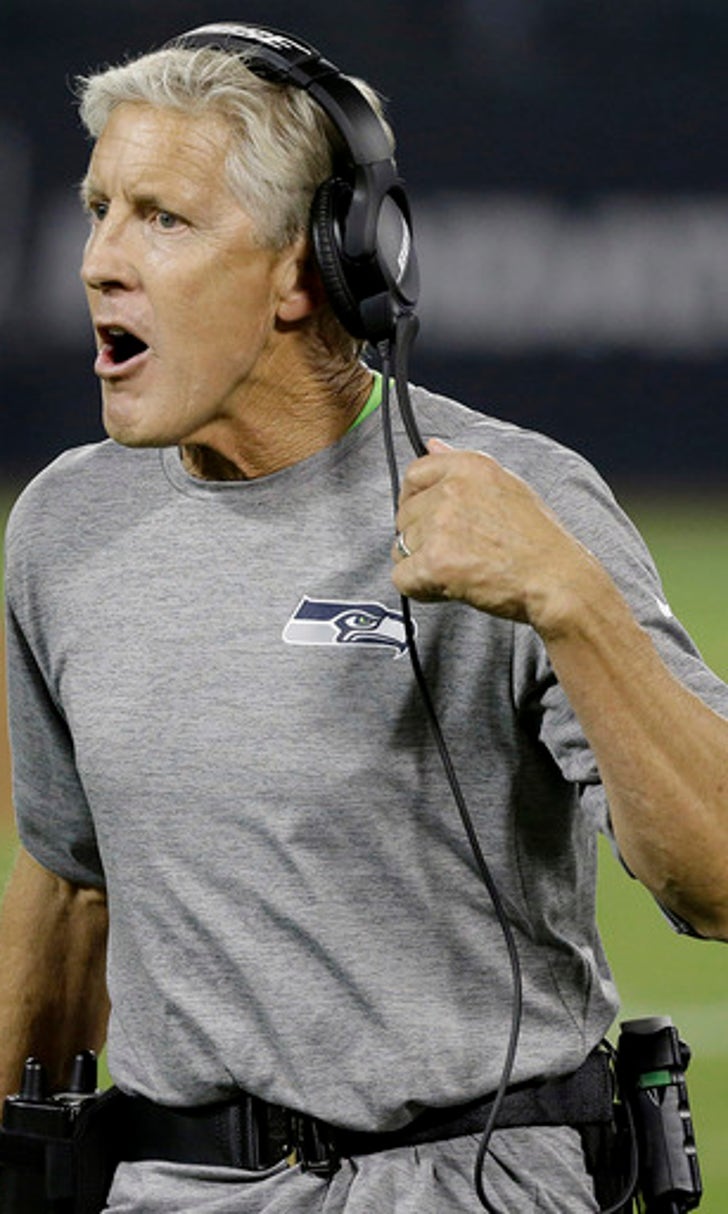 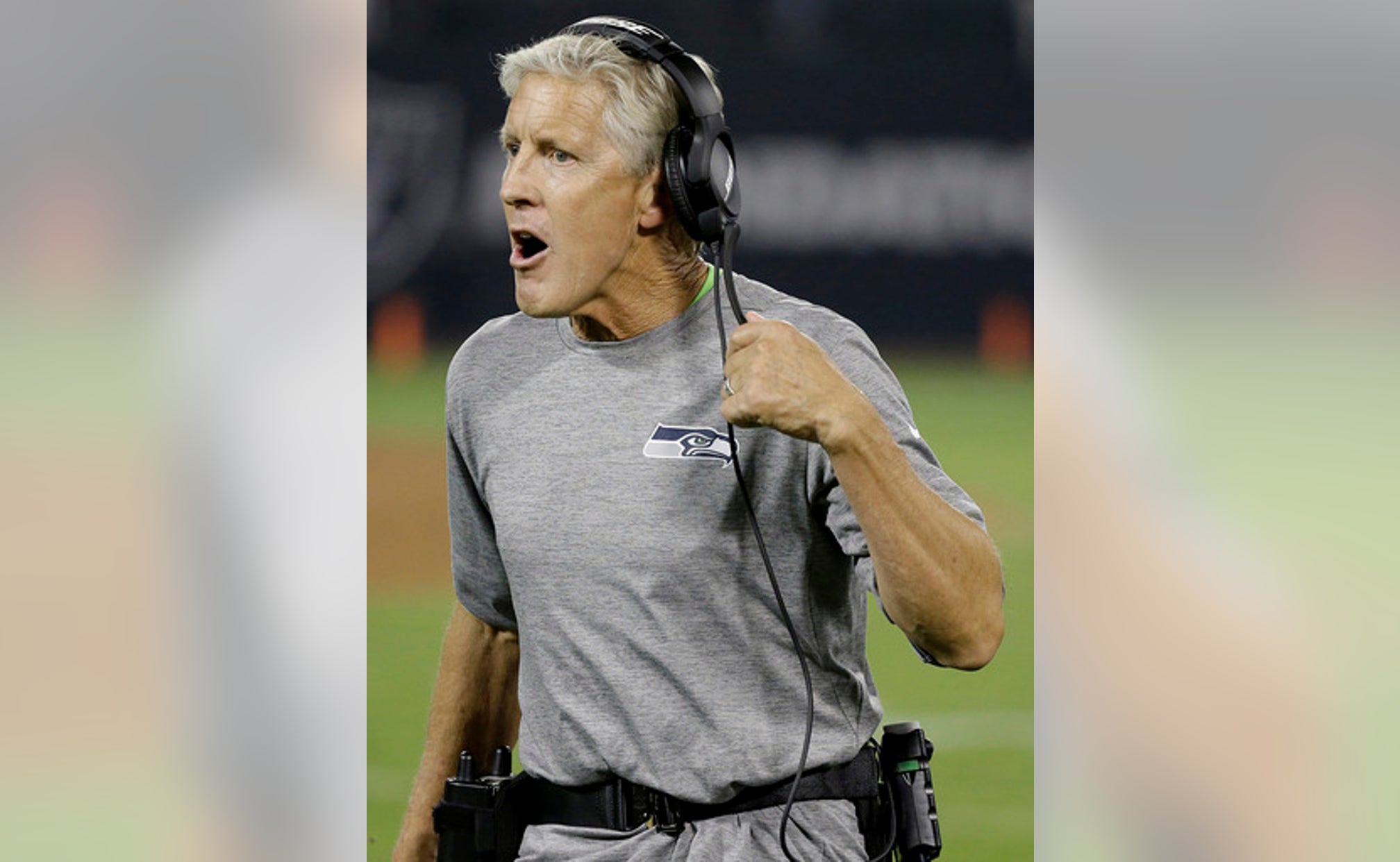 OAKLAND, Calif. (AP) Seattle quarterback Austin Davis wasn't real happy with his game-winning touchdown pass to Kenny Lawler, even if it might have solidified his status as the Seahawks' primary backup.

The way Davis viewed the play, it was a lucky throw that Lawler made the best of.

Davis threw a 16-yard touchdown pass to Lawler with 1:10 remaining in the fourth quarter, and Seattle beat the Oakland Raiders 17-13 in a preseason game Thursday night.

''We ran four verts, they played single high and the nickel hung outside, and K did a good job leaning on him, breaking across,'' Davis said. ''It wasn't a great throw. I threw it behind him but I threw it early enough where the defender couldn't make a play on it. Really a better catch than it was a throw.''

The Seahawks trailed 13-10 following Giorgio Tavecchio's 28-yard field goal with 3:46 left before Davis engineered a seven-play, 75-yard drive in 2:36 that likely gave him the edge over Trevone Boykin for the backup job behind Russell Wilson.

''He had a terrific opportunity and was able to come through,'' Seahawks coach Pete Carroll said. ''He hit a big touchdown pass and handled the clock and everything beautifully and very poised. Was a really good showing for him.''

Davis completed 10 of 16 passes for 123 yards, while Boykin went 13 of 21 for 166 yards and a touchdown. Boykin was also intercepted twice and narrowly missed a third, and his 34-yard scoring pass to Rodney Smith came after defensive back Dexter McDonald tripped and fell in coverage.

''Obviously he was stronger in his first two games than the last two but he shows us he can do a lot of stuff for us,'' Carroll said of Boykins.

Seattle finished 4-0 in the preseason; the Raiders went winless for only the third time in franchise history.

The Raiders likely also cleared up their backup quarterback spot.

EJ Manuel completed 8 of 12 passes for 77 yards and a touchdown while appearing to gain the upper hand in the battle with Connor Cook behind Derek Carr. Cook, a fourth-round draft pick in 2016, went 6 for 16 for 71 yards and was intercepted on Oakland's final possession.

''I think EJ's been ahead. He was ahead most of the summer,'' Raiders coach Jack Del Rio said. ''We like both of these young men; they've worked hard for us. They challenge each other and work well. Right now I'd say that EJ's ahead.''

As expected, the game was basically a matchup of backups.

Wide receiver Jermaine Kearse was also notably absent in what may have been his final game with the Seahawks after rumors earlier this week Seattle is attempting to trade the veteran.

''Obviously I want to be here,'' Kearse said. ''Really just taking it one day at a time. I don't know what's happening. I haven't talked to them.''

Carroll declined to talk about the topic.

Seattle drew nine penalties for 122 yards. Three of the penalties were personal fouls and two were for defensive pass interference.

Oakland had seven penalties for 60 yards.

SITTING OUT THE ANTHEM

Like they have done throughout the preseason, both Bennett and Marshawn Lynch sat during the playing of the national anthem before the game. Bennett sat on a bench on the Seattle sideline while center Justin Britt stood beside Bennett with his hand on his teammate's shoulder. Britt did the same thing twice before. Lynch sat in front of a row of coolers on the Raiders sideline in the same fashion he has every game during the preseason.

Raiders first-round pick Gareon Conley suited up but did not play. Conley missed all of training camp with a shin injury and was activated off the PUP list earlier this week.

Second-year Seattle cornerback DeAndre Elliott suffered a dislocated and broken right ankle midway through the second quarter. Players from both teams came out to check on Elliott and the entire Seahawks squad surrounded him as he was loaded onto a cart. Elliott raised his right hand in a thumbs-up sign while being driven away. ''He had a bad break today unfortunately,'' Carroll said.

Lynch's mother, Delisa, lit the Al Davis torch before the game. Like her son, Delisa Lynch is very active with youth in the Oakland community.

Seahawks: Open the season at Green Bay on Sept. 10.

Raiders: Begin the season at Tennessee on Sept. 10.