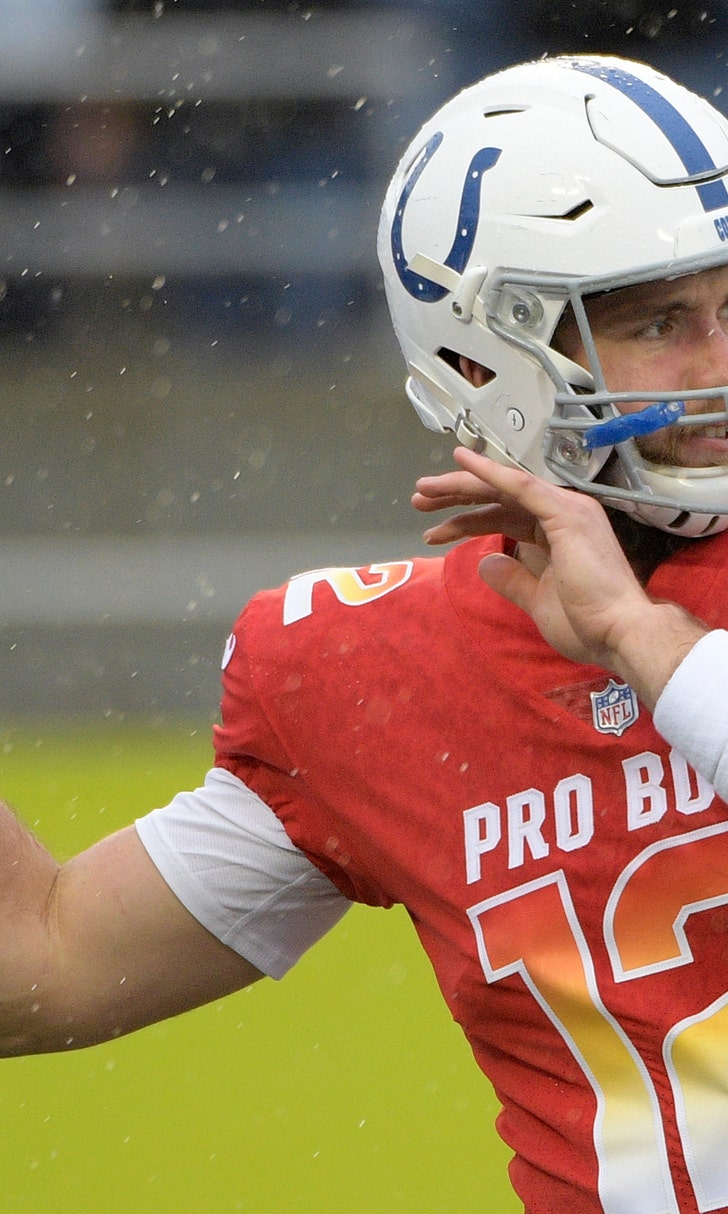 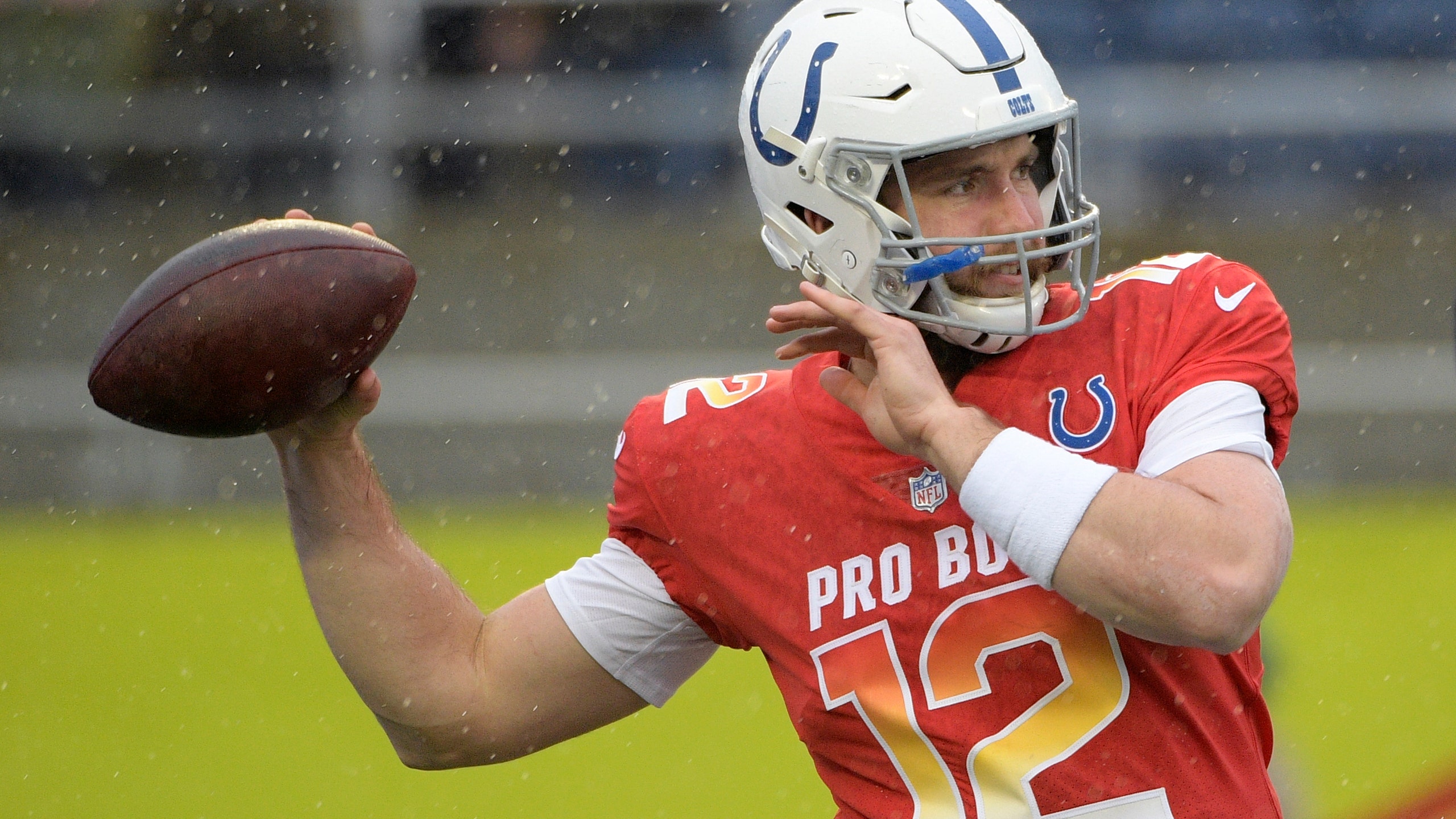 INDIANAPOLIS (AP) — Andrew Luck spent three offseasons fighting his way back from injuries. Now he can reap the reward.

After returning to the field, making it back to the playoffs, regaining his Pro Bowl form and collecting The Associated Press NFL Comeback Player of the Year Award, a healthy Luck now intends to take a rare and well-deserved break from football.

"I'll be honest, I probably won't throw for a while," he said before cleaning out his locker. "There will be tweaks, there will be changes to what I do (this offseason) but all of it is geared to one, make me as happy as possible and two, set me up to improve as a quarterback and improve as a person."

How Luck will spend his downtime is unclear.

Matt Hasselbeck, a three-time Pro Bowler who backed up Favre and Luck during his 17-year career, became a believer. So after hearing a story about Manning meeting a former U.S. president one offseason, Hasselbeck accepted an offer from assistant coach Clyde Christensen to spend time with a Navy admiral.

"He talked to us in our quarterback meeting one day about protecting the football because we'd had some issues and he used this analogy of what they tell Top Gun pilots," Hasselbeck said. "It was basically that you have this great plane you get to fly and it does not belong to you. It belongs to the government, it belongs to the people. Clyde said we should take the admiral up on spending some time with him. So I did that one offseason.

"That's an example of something that's not necessarily X's and O's but it's a form of leadership training or just working on you and if you're working on you, you're improving everything about you."

It was a message Hasselbeck relayed to Luck after joining the Colts in 2013. But it was a hard sell to a young workout warrior with the pressure and expectations of a No. 1 draft pick.

While Luck enjoyed vacationing in Europe, where he spent part of his childhood reading books, following soccer and riding bikes, the desire to improve drove him to work out.

In time, Hasselbeck's message sank in.

"That conversation came up when I was talking about how long I wanted to play. This year we were talking and Andrew said 'I remember you saying it and it didn't make sense then.' He said now it totally makes sense."

Luck's good year came with 16 starts for the first time since 2014, producing career highs in completions, attempts and completion percentage. He finished second to Patrick Mahomes in touchdown passes, helped the Colts end a three-year playoff drought and found a better balance between life and football.

"I don't think he's really going to get away," longtime left tackle Anthony Castonzo said. "I think it's so cool he's not going to have to recover from an injury or have to get healthy first. He'll probably try to get away, but he's like me — after a short time you've got to find a gym or somewhere to work out because otherwise you feel like garbage."

The difference is the 20-month gap between regular-season games following surgery on a partially torn labrum and three successive injury-plagued offseasons have changed Luck's perspective.

He never missed a chance to explain how much fun he had last season and acknowledged things felt different after a season-ending loss to Kansas City.

"In past seasons, there has been a massive emotional letdown — like now I can try to be a good boyfriend or now I can try to do this and that," he said. "But it doesn't seem that way this year. One of my challenges for myself was to maybe not silo everything in my life so much but be able to exist as a happy human throughout a season, not just after the season. So I don't have this, I guess desire, to run away and hide for a couple weeks."

Instead, he threw for a week leading up to the Pro Bowl and attended the NFL's honors banquet last week.

Luck hasn't said if he will work out again at Stanford, his alma mater, but acknowledged he'll continue to work with Tom House, the former Major League Baseball pitcher who has helped him in the past. But the Colts remain convinced the best prescription for Luck is rest.

"He's got to be fired up right now to have a normal offseason," coach Frank Reich said. "To get away and I know he's Andrew — he's still going to do his deal and be disciplined — but just relax. My encouragement to him would be, 'You better do that, you better take advantage of it.'"