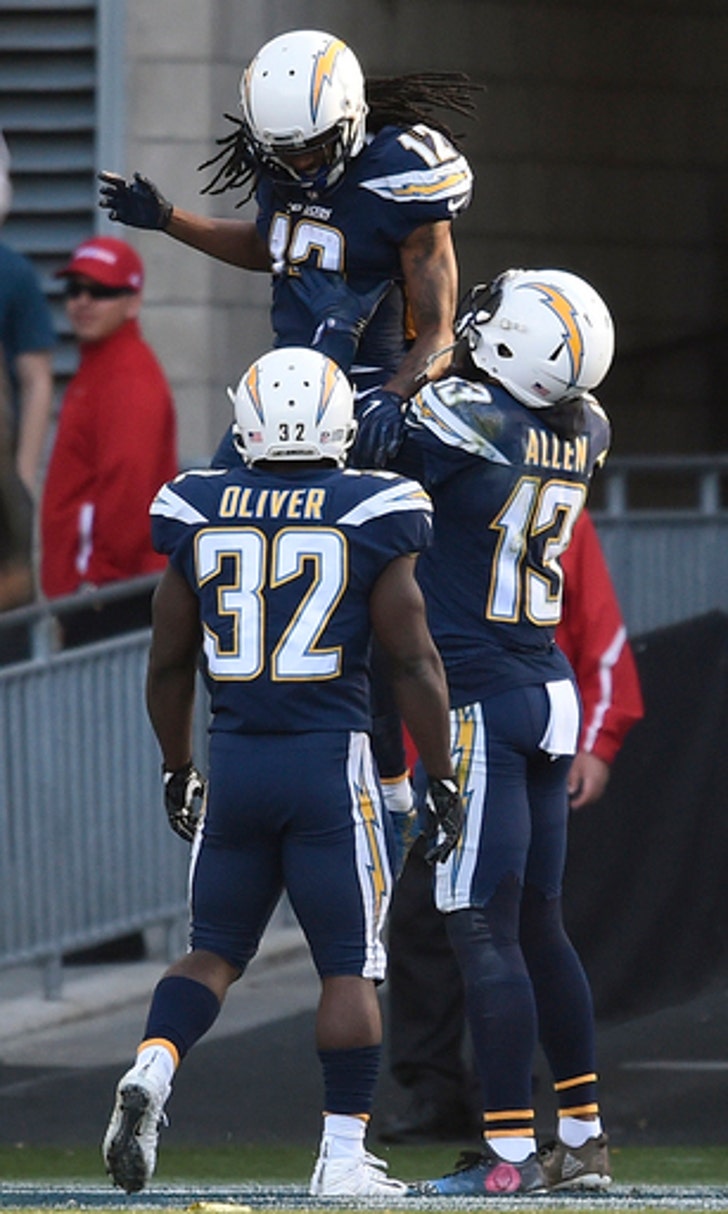 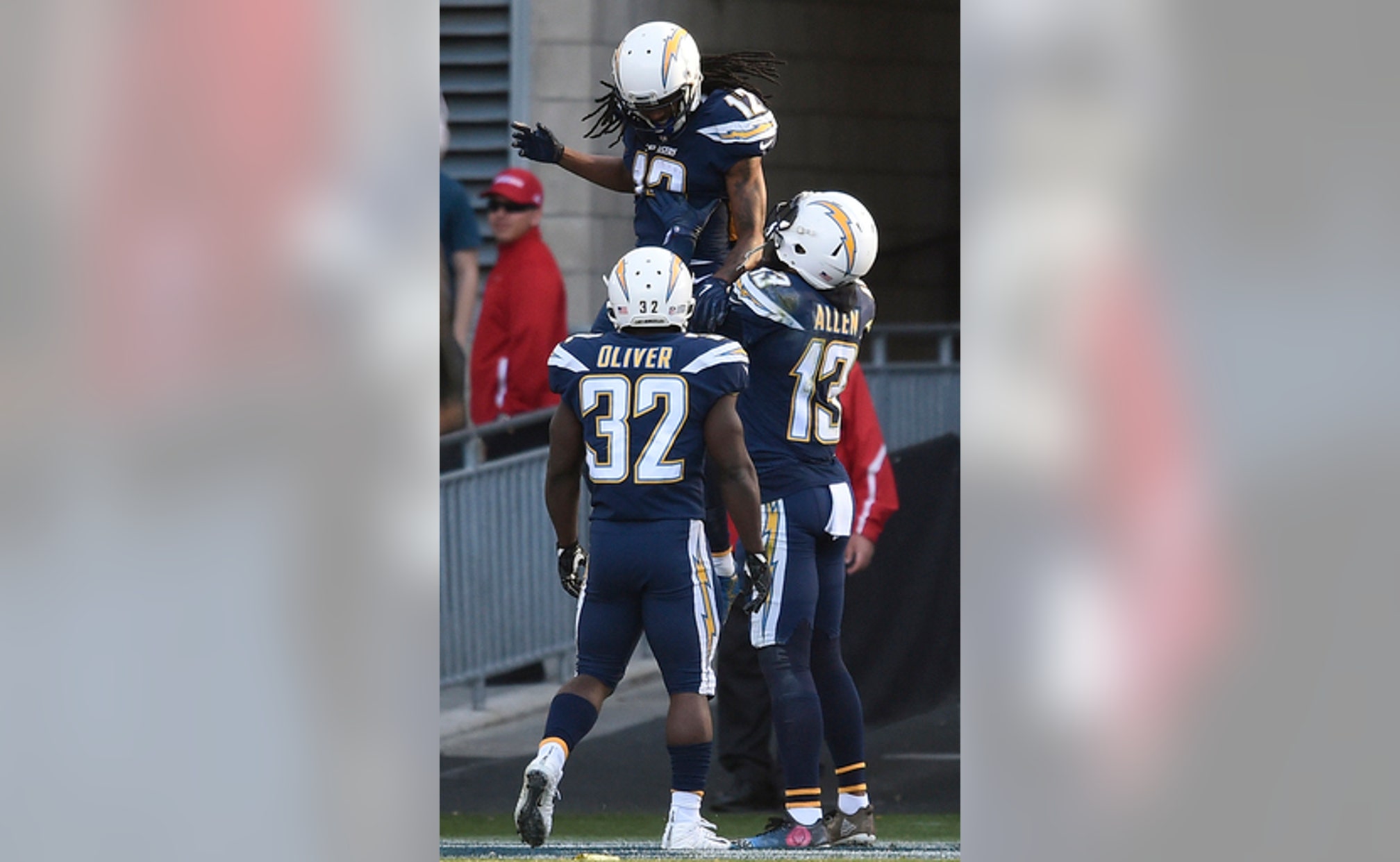 CARSON, Calif. (AP) Philip Rivers and the Los Angeles Chargers finished off another impressive home victory and quickly retreated to their locker room, hoping for good news that never came.

The Oakland Raiders trudged back to their locker room and got some dismaying news of their own: coach Jack Del Rio had been fired at the close of a miserable season.

Rivers passed for 387 yards and three touchdowns, but the Chargers missed out on a playoff berth despite their 30-10 victory over the Raiders on Sunday.

Keenan Allen scored on a 27-yard fumble recovery and a brilliant 6-yard TD catch for the Chargers (9-7), who won six of their final seven games in their relocation season.

But the Bolts needed help from losses by two other AFC teams to become the second team in NFL history to make the playoffs after an 0-4 start, and they were eliminated when Tennessee beat Jacksonville 15-10 moments after the final gun in Carson.

''You're a little bit disappointed. Shoot, a lot disappointed,'' Rivers said. ''You kick yourself that you put yourself in this situation where you needed help, and you know you let some games get away that you never should have. ... That's where it hurts the most, because we're a pretty hot team that's going home.''

Tyrell Williams caught a 56-yard TD pass and Travis Benjamin caught a 62-yard scoring pass for the Chargers, who won nine of their final 12 games. They fought fiercely to overcome that rough start, which included two losses decided by missed field goals on the final snap, but the Bolts couldn't quite do it.

''I think this team can become a championship team,'' Chargers first-year head coach Anthony Lynn said. ''That's what I believe. I don't think that, I believe. They showed me that throughout the season. I wish it would have happened a little sooner, but I think we're trending in the right direction. I think we're on to something.''

Davis then put Del Rio in the awkward position of announcing his own firing.

''He told me he loved me and appreciated all that I did, but felt like we weren't going in the right direction,'' Del Rio said. ''He felt he needed a change, and I told him how much I appreciated the opportunity he gave me. I mean that. Very grateful. My childhood team. But it's a results business. I understand that.''

Carr passed for 243 yards as the Raiders wrapped up their 14th non-winning season in the past 15 years.

''It hurts,'' Carr said. ''This is a bond that you create and that's a bond that is going to last. It hurts when something (bad) happens to someone you care about. We weren't good enough for him.''

Rivers became the ninth quarterback in NFL history to surpass 50,000 yards passing, and he tied Fran Tarkenton for sixth place in league history with 342 touchdown passes. The 36-year-old passer left little doubt he's still on top of his game with a series of fine long passes, shredding the Raiders' beleaguered secondary.

After a scoreless first quarter, Allen finished a 99-yard drive for the Chargers by being in the right place when running back Melvin Gordon fumbled for the first time all season. The ball popped in the air and straight to Allen, who took it in for the sixth TD of his Pro Bowl season.

The Raiders answered with a beautiful, long strike down the middle from Carr to Cooper, who took it in untouched.

Williams scored untouched on another long strike down the middle of the Raiders' defense later in the quarter. Allen then capped the half with an exceptional foot-drag TD grab on a pinpoint fade pass from Rivers.

Gordon rushed for 93 yards for the Chargers, who finished the scoring in the third quarter when Benjamin went in untouched on another long throw by Rivers.

The Chargers swept their season series with their fiercest rivals and earned their fifth straight win at StubHub Center despite a crowd cheering loudly for the Raiders, who played in Los Angeles County for the first time since moving back to Oakland after the 1994 season.

Those fans had little to celebrate as the Chargers beat down the Raiders, and a handful of silver-and-black fans threw bottles at the Chargers' defense while it celebrated a fourth-quarter turnover in the end zone.

Allen finished with nine catches for 133 yards in the latest spectacular game in his Pro Bowl season. He broke LaDainian Tomlinson's single-season Chargers record on his 101st catch of the season in the fourth quarter.

Marshawn Lynch finished strong in his first season with his hometown team, getting 101 yards rushing and earning a $600,000 bonus for surpassing 800 yards on the season. He also surpassed 10,000 yards rushing for his career with an 11-yard gain late in the fourth quarter.

Raiders: S Karl Joseph injured his hamstring in the first half. ... DL Eddie Vanderdoes had to be helped off the field in the fourth quarter.