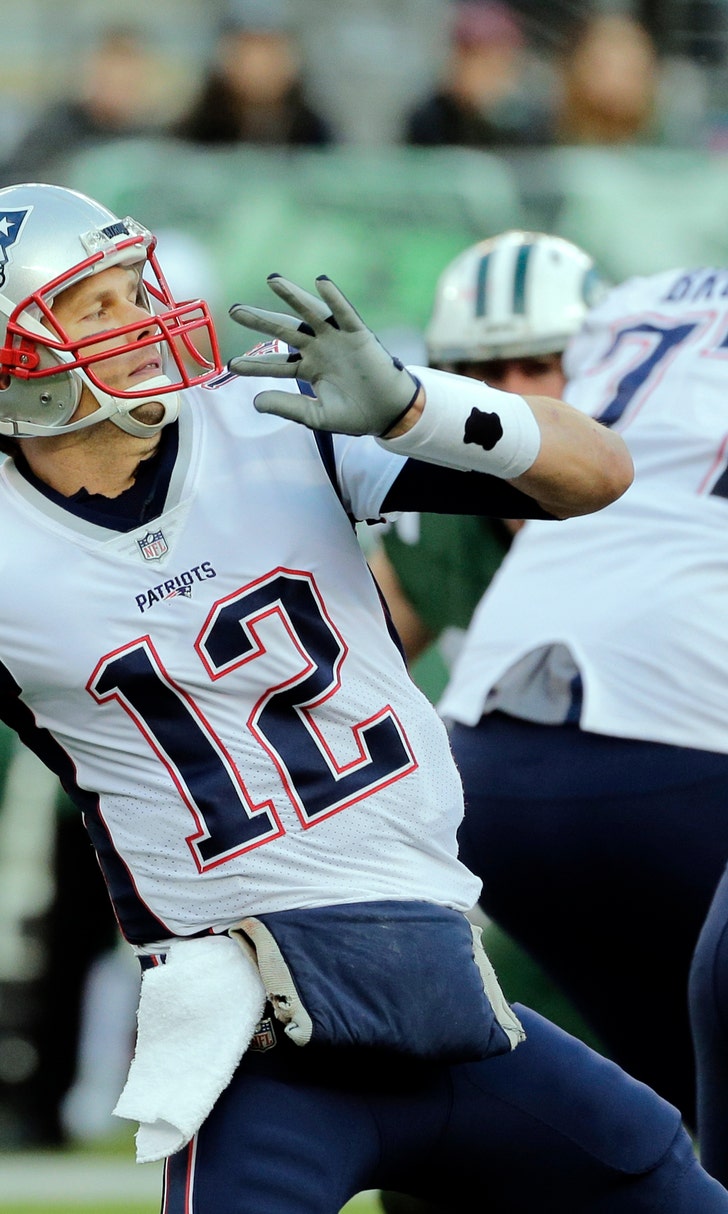 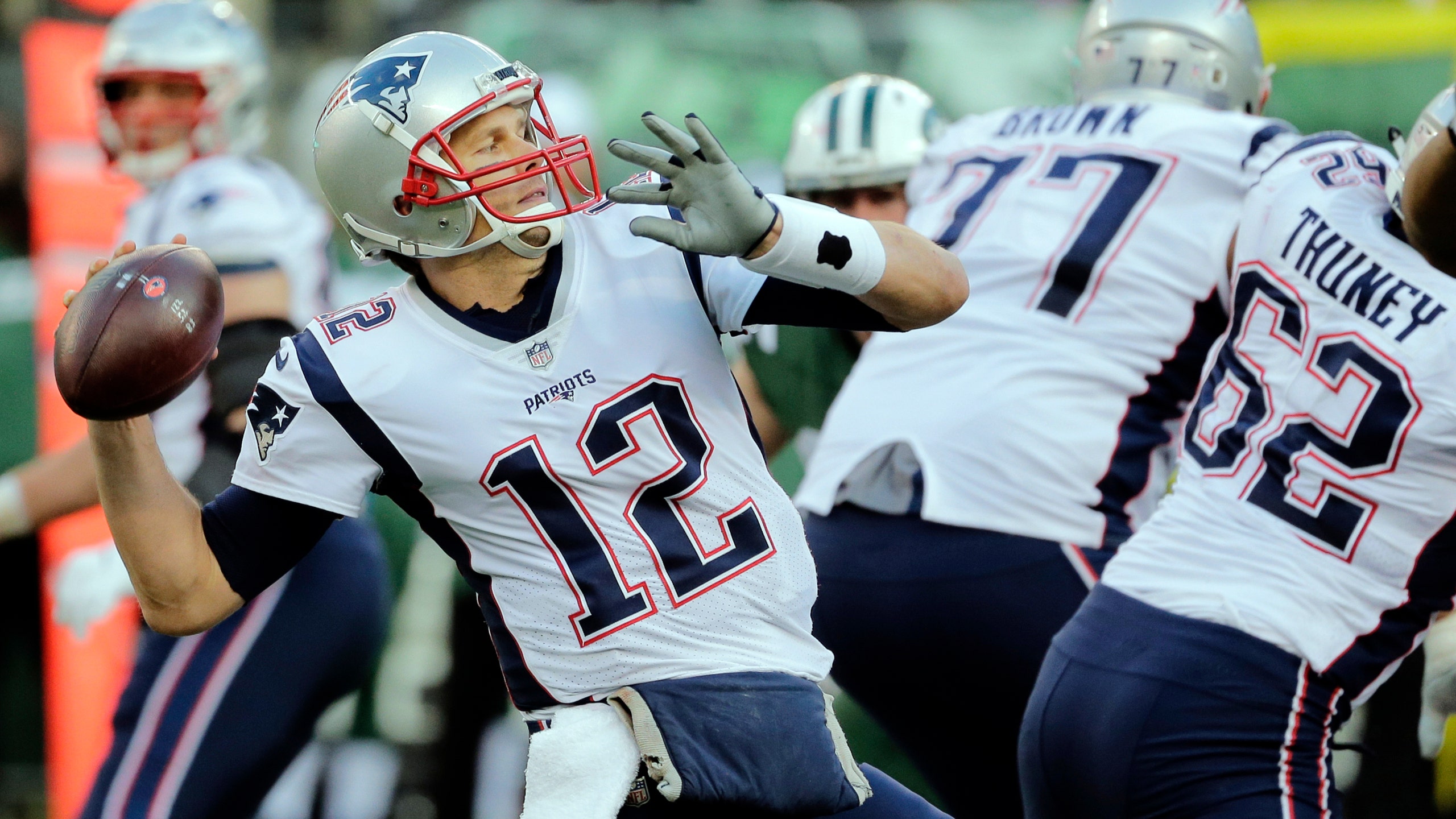 ATLANTA (AP) — Trent Brown made a huge — no, massive — impression the first time he strolled through the door at New England's facility and met his new teammates.

"Man, I thought Nate Solder was big," Patriots center David Andrews said while shaking his head. "And then he walked into the room."

Brown is a mammoth of a man, standing at 6-foot-8 and weighing in at a scale-tipping 380 pounds as the heaviest player in the NFL. It's a distinction the Patriots left tackle carries around like a badge of pride.

Just ask his offensive linemates, who support — OK, endure — Brown having no qualms about roaming the locker room in all his bare, barrel-chested glory.

"Yeah, hey, whatever, right? He's a good-looking guy," backup offensive lineman Ted Karras said with a big smile. "I mean, this is the league of the biggest, baddest men and he has the distinction of being the biggest, which is pretty cool.

"And, he plays to it and been doing a great job."

Brown has been a pleasant surprise this season for the Patriots, whose line has kept Tom Brady clean throughout the postseason — not allowing a single sack. Brown has been a big-time key, literally and figuratively, as the protector of the five-time Super Bowl-winning quarterback's blind side.

"I think Trent has just kind of fit into the system and progressed every week to be a better player," offensive line coach Dante Scarnecchia said. "He's worked to be a better player every week. He wasn't without skills. We got him and he was a guy who could move his feet. He's long and certainly is athletic enough to play. And he's big and he can knock people off the ball."

Solder, a big boy himself at 6-8 and 320 pounds, had the left tackle gig for seven seasons until he signed with the New York Giants last offseason as a free agent. Bill Belichick and the Patriots filled the void by swinging a deal during the draft, trading a third-round pick to San Francisco for Brown and a fifth-round selection.

Brown immediately slid into the starting job at left tackle — despite playing on the right side his first three NFL seasons with the 49ers.

"It's worked out really well for us considering he hasn't played much left tackle," Scarnecchia said. "We put him there out of need and he's really come through. Him coming through this week will be really important for us."

Mostly because the Patriots will be taking on a Los Angeles Rams defensive line that features Aaron Donald, who led the league with 20½ sacks, and the always-disruptive Ndamukong Suh and Dante Fowler.

"The passing game starts with them, the running game starts with them," Brady said. "Over the last four or five weeks, we've really been efficient at both of those at different times and different ways, and we've really needed it. We're counting on those guys when we need it most and obviously going into this game against the best D-line in football is a big challenge — and that's what these games are all about."

The line has been consistently good in pass protection this season as Brady was pressured on only 25.8 percent of his dropbacks, according to the analytics site Pro Football Focus. That ranks as the league's third-lowest rate.

"I love talking about them," Brady said of his linemen, "so we could talk about them all night."

Along with fullback James Develin blasting open holes for the running backs, the Patriots' O-line helped the running game ranked fifth in the league during the regular season. New England has also averaged 165.5 yards on the ground this postseason — second only to the Rams (175.0).

Not bad for a mostly rag-tag bunch of offensive linemen who stand out more as a unit than as highly touted individuals, with not one first-rounder among them.

Brown was a seventh-rounder by San Francisco in 2015, while Mason went in the fourth round. Andrews was an undrafted free agent that same year.

Thuney came to New England as a third-round pick in 2016.

Cannon is the veteran of the group, having joined the Patriots as a fifth-rounder in 2011. But he didn't become a consistent starter until 2015.

"They're just a great group," Brady said. "They work so well together. They've got the best O-line coach in history coaching them who holds those guys to such a high standard every day.

"They're the heart and soul of our offense."