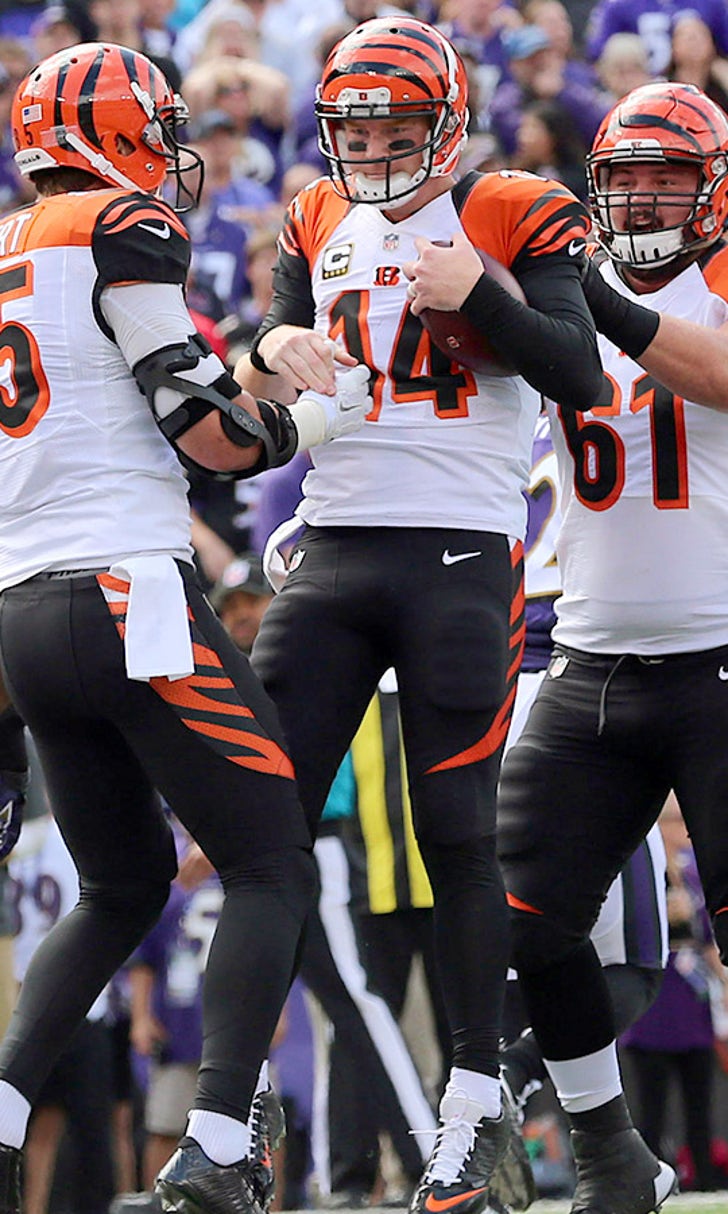 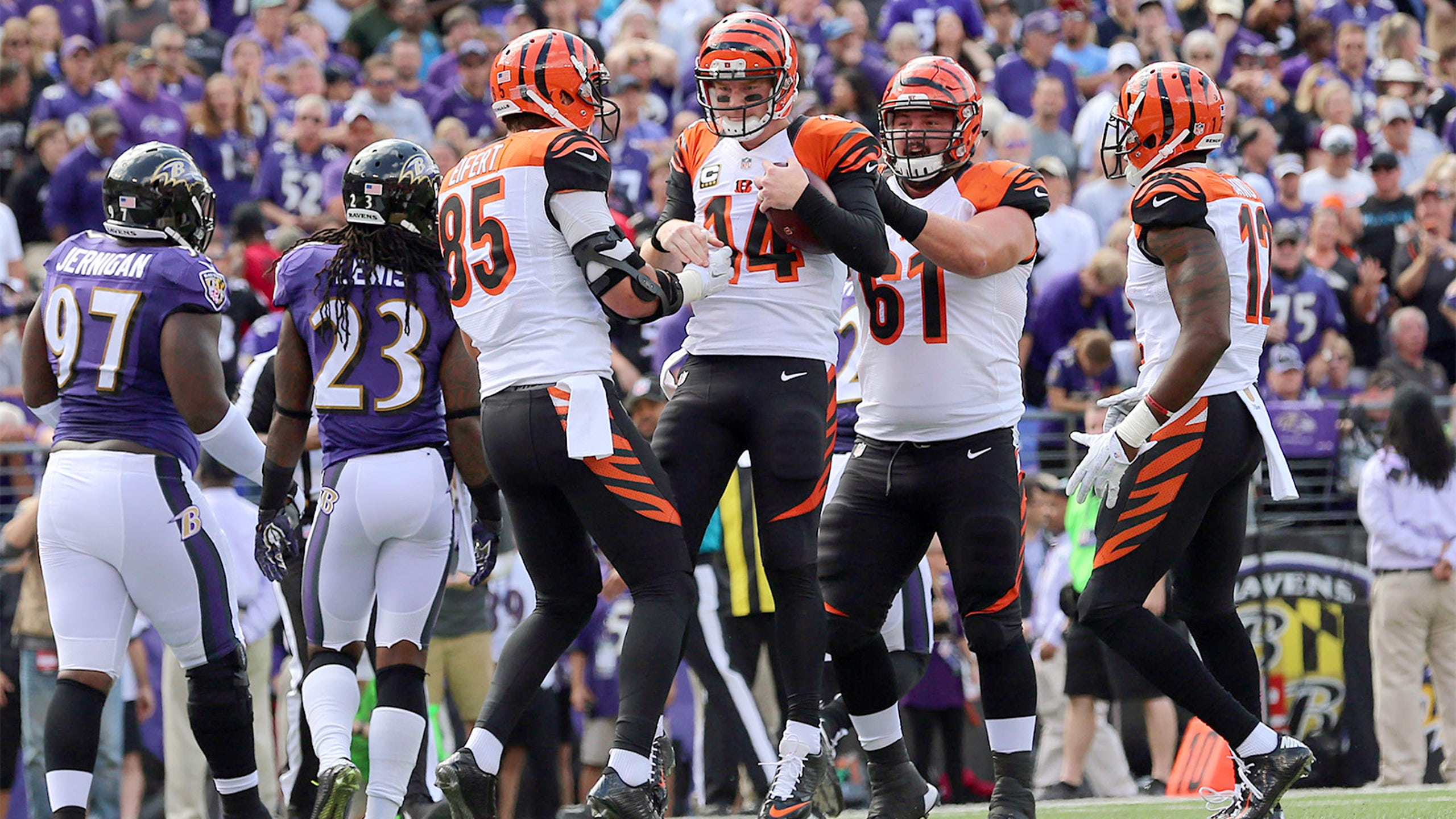 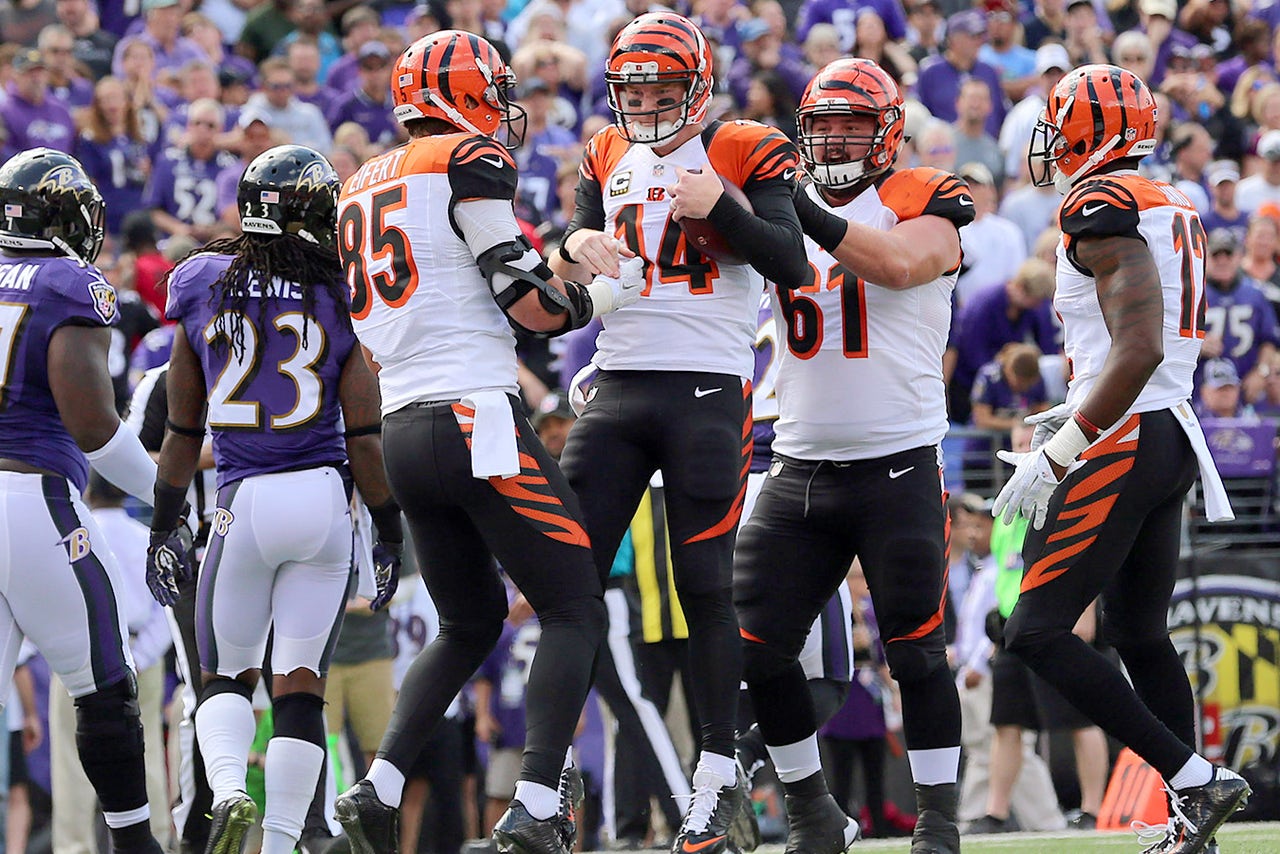 We are halfway through the 2015 season and already down to a one-horse race in the AFC North, a divison full of surprises.

At 7-0 for the first time in franchise history, the Bengals are already 3 1/2 games clear of the Pittsburgh Steelers, marking a huge turnaround from last season when a three-way race for the division came down to the final week.

Without further ado, let's handout some hardware at the halfway point.

Dalton looks like a completely different player this season as the leader of the unbeaten Bengals. He's completed 66 percent of his passes and has 15 touchdown passes against just four interceptions. Unlike in the past, Dalton has risen to the occasion every time his team has needed him, like in the team's Week 5 overtime win over Seattle. And just like when it seemed 'Bad Andy' may surface again in Pittsburgh on Sunday, Dalton overcame his struggles late in the fourth quarter to preserve Cincy's perfect record.

Whitworth is the best offensive tackle that hardly anyone knows despite the fact that he hasn't allowed a sack in 24 games. Keeping Andy Dalton clean has been a primary reason for the team's success, and the offensive line has allowed just nine sacks in seven games. Even more impressive, Dalton had four games where he wasn't sacked at all, and the man protecting his blind side is most responsible for those numbers.

Williams filled in more than capably when Le'Veon Bell was suspended for the first two games of the season. After a quiet few games, Williams will be needed now more than ever with Bell out for the season. Not having a reliable backup killed Pittsburgh's playoff dreams last season after Bell went down in Week 17. Williams, who totaled 110 yards on just 13 touches after Bell went down Sunday in Cincinnati, will have to be a key player the rest of the way if the Steelers are to get back to the postseason.

There's been little impact from the 2015 draft class through the first half. Browns defensive tackle Danny Shelton is occupying blockers but has done little to improve the team's atrocious run defense while fellow first-round pick Cameron Erving has been relegated to the bench. Ravens receiver Breshad Perriman and Bengals offensive tackle Cedric Ogbuehi have yet to play due to injury, leaving Steelers linebacker Bud Dupree as the most productive first-round pick so far with a team-leading four sacks.

Johnson edges Dupree as the top rookie as the best threat out of Cleveland's backfield, although it isn't saying much. Johnson is already getting more playing time ahead of Isaiah Crowell, and he simply passes the eye test thanks to his gamebreaking speed. If he can remain healthy, Johnson has a good chance to continue win this award again at season's end.

The Ravens entered the season with Super Bowl aspirations after nearly taking down New England in the divisional round last season. Defensive leader Terrell Suggs went down in Week 1 and Baltimore's season has unraveled since. Now at 2-6, the Ravens lost top receiver Steve Smith Sr., and now they'll have a good chance to compete for the No. 1 overall pick in the draft instead.

Signed to a two-year deal worth $12.5 million, Bowe was planning on many leaps into the Dawg Pound to help ease the loss of Josh Gordon. Instead, he's found himself in the dog house as a bust that likely would've been cut if not for the $9 million he's owed in guaranteed money. Bowe has only dressed in three games this season and is still looking for his first catch. Somehow, receivers who have done very little remain in front of Bowe on the depth chart, indicating that Bowe's stay on the sideline could last the entire season.

Player To Watch Out For In The Second Half: Johnny Manziel

With the Browns virtually eliminated from playoff contention already, it makes sense for them to see what they have in Manziel. Eight games should be enough to determine if Manziel can be the starter next season or if Cleveland needs to continue its seemingly neverending quarterback search.