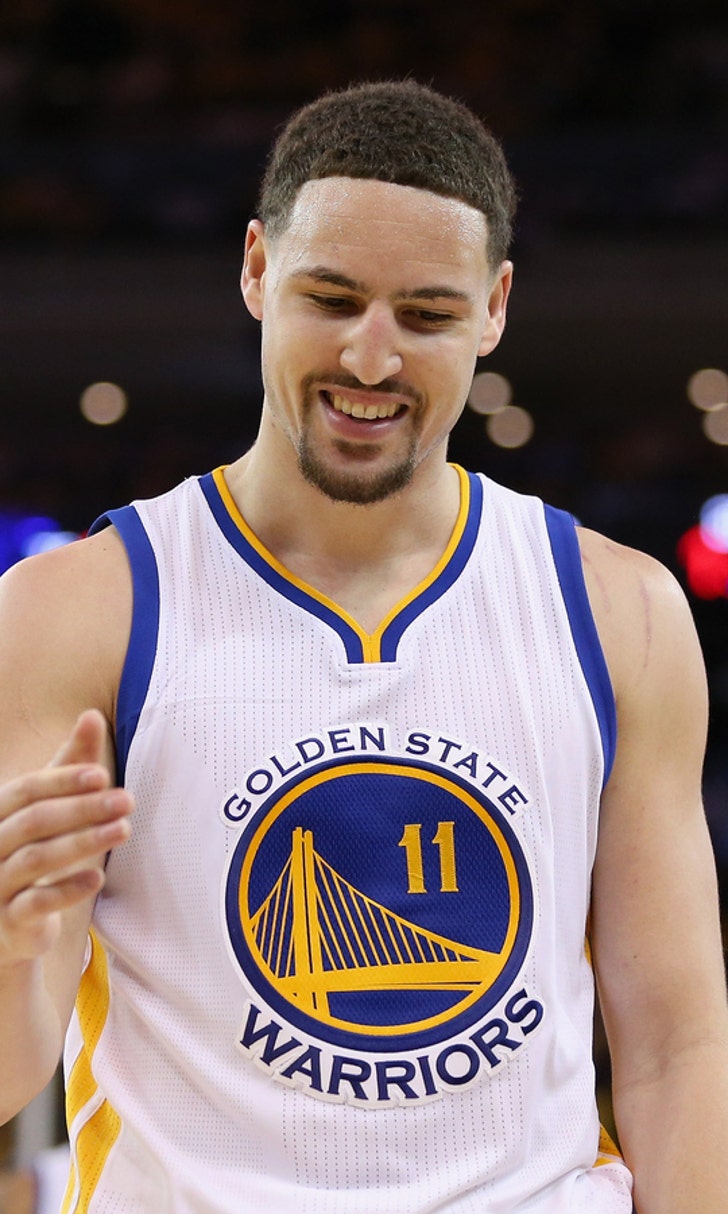 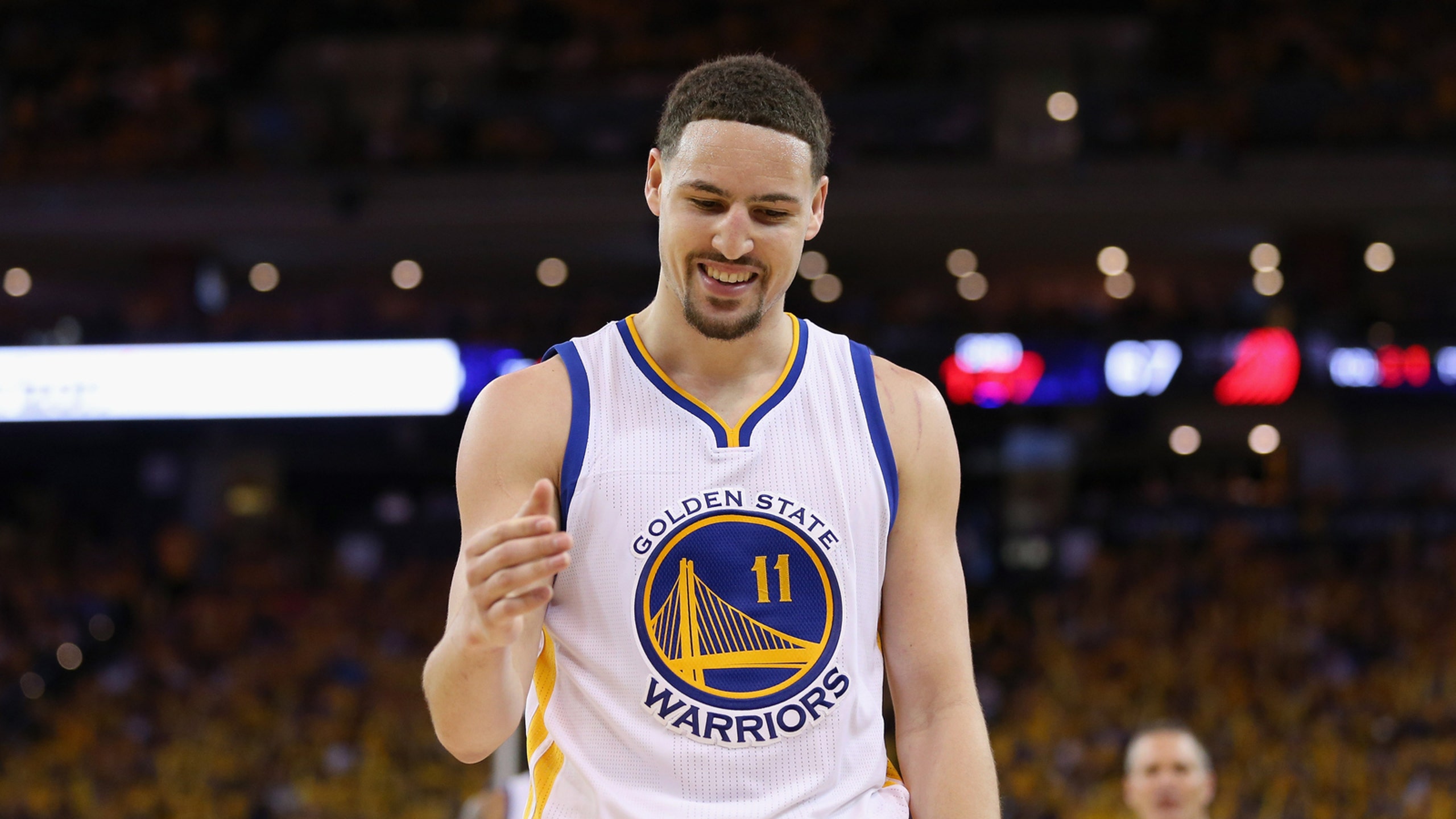 Warriors rally for 2-0 lead on Blazers; Curry could be back for Game 3

Next game, they might have him back and really get rolling.

Klay Thompson scored 27 points and gave Golden State its first lead of the game on a 3-pointer with 5:33 left, and the Warriors rallied to beat the Portland Trail Blazers 110-99 on Tuesday night for a 2-0 lead in their Western Conference semifinal series.

"It started with how focused we were in that fourth," Thompson said. "We've been down and out before. ... We were just locked in on both sides of the ball. We can build on this game. That effort there in the fourth quarter is what it's going to take to beat this team."

Draymond Green added 17 points, 14 rebounds, seven assists and four blocked shots in another win without Curry, sidelined with a sprained MCL in his right knee and relished to coaching to help any way he could.

Game 3 is Saturday in Portland, and Curry could be in uniform.

Thompson's 3 with 6:44 remaining tied it, igniting the sellout crowd inside deafening Oracle Arena as the defending champions erased an early 17-point deficit.

"We hung in there," Warriors coach Steve Kerr said. "We turned around what was a pretty bad game for us but we had enough time to get back."

Damian Lillard's 3 to beat the third-quarter buzzer put Portland ahead 87-76 entering the final 12 minutes — Golden State's largest deficit going into the fourth during the playoffs.

For most of the night, the energized Blazers did everything the defending champions typically do on their impenetrable home court: making the zippy pass, setting the tone on the defensive end, crashing the boards, answering any threat with a big basket.

Lillard had 25 points and six assists, and CJ McCollum added 22 points as Portland hit 13 3-pointers. The Blazers were also down 2-0 in the first round to the Clippers.

Shaun Livingston scored 14 points for his fifth double-digit performance during these playoffs filling in for Curry. Little-used Festus Ezeli contributed eight points and six rebounds down the stretch.

Thompson, coming off a career playoff-high 37 points in Sunday's 118-106 Game 1 win, shot 7 for 20 with five 3-pointers. Andre Iguodala made all five of his first-half shots for 11 of his 15 points to go with five rebounds and four assists, helping Golden State get back within 59-51 at the break.

The Blazers switched up defenders to swarm Thompson, from Allen Crabbe to Al-Farouq Aminu, Maurice Harkless and others.

So out of sync were the Warriors early that at one point Curry could be seen emphatically adding his input in the middle of the coaches' huddle and again to teammates.

"We had an opportunity to steal one on the road. It hurts to go back in the locker room after playing so well for so long," Lillard said. "They played desperate."

The Warriors won their sixth straight at home against Portland, all by double figures for a total margin of victory of 89 points.

Ian Clark gave Golden State a lift late in the first half and produced five points in nearly 12 minutes.

The Blazers came out defending well from the tip unlike Game 1, as the Warriors missed eight of their first 10 shots and Portland took a 17-5 lead midway through the first quarter.

Andrew Bogut's two blocks gave him 65 in the playoffs, most in Warriors franchise postseason history.

Trail Blazers: Portland's 34 first-quarter points were the most allowed by Golden State this postseason. ... The Blazers are 5-21 at Golden State since the start of the 2003-04 season.

Warriors: The Warriors had their first halftime deficit at home these playoffs. ... Golden State is 5-0 at Oracle this postseason. ... Curry won the Magic Johnson Award, given by the Professional Basketball Writers Association to an NBA player who combines excellence on the court with cooperation with the public and media. ... Justin Holiday, a member of last season's title team now with Chicago, received his championship ring from Coach of the Year Kerr and general manager Bob Myers.