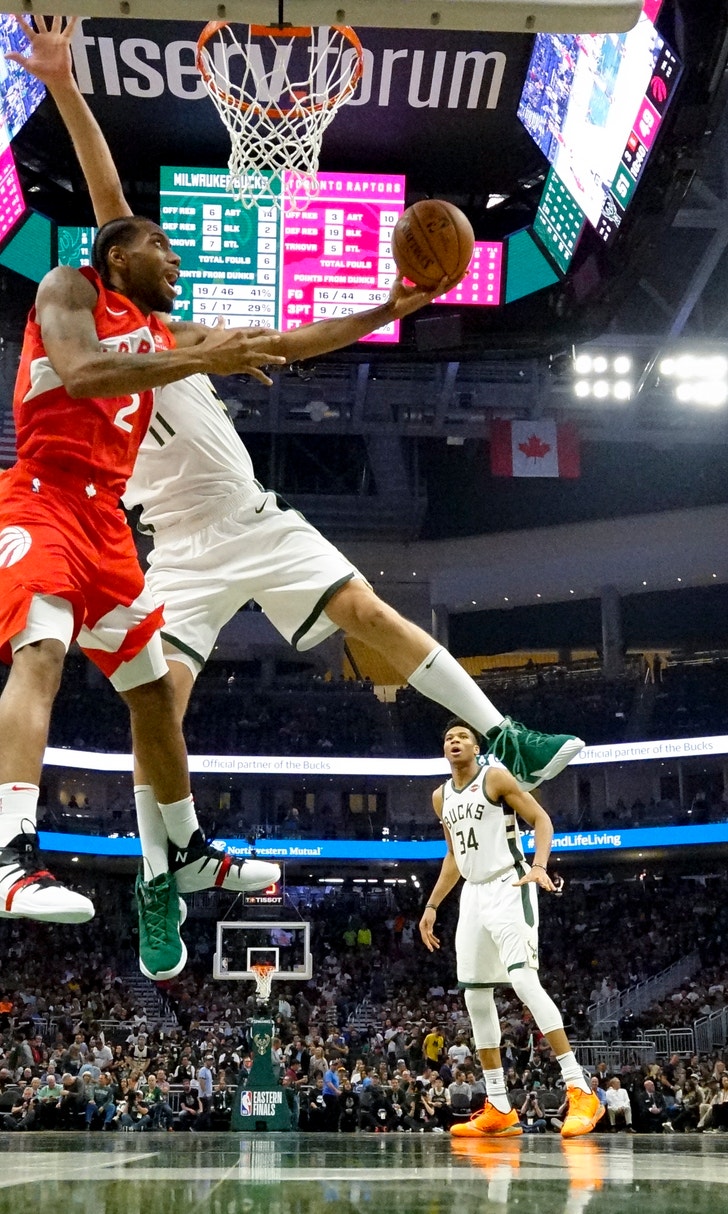 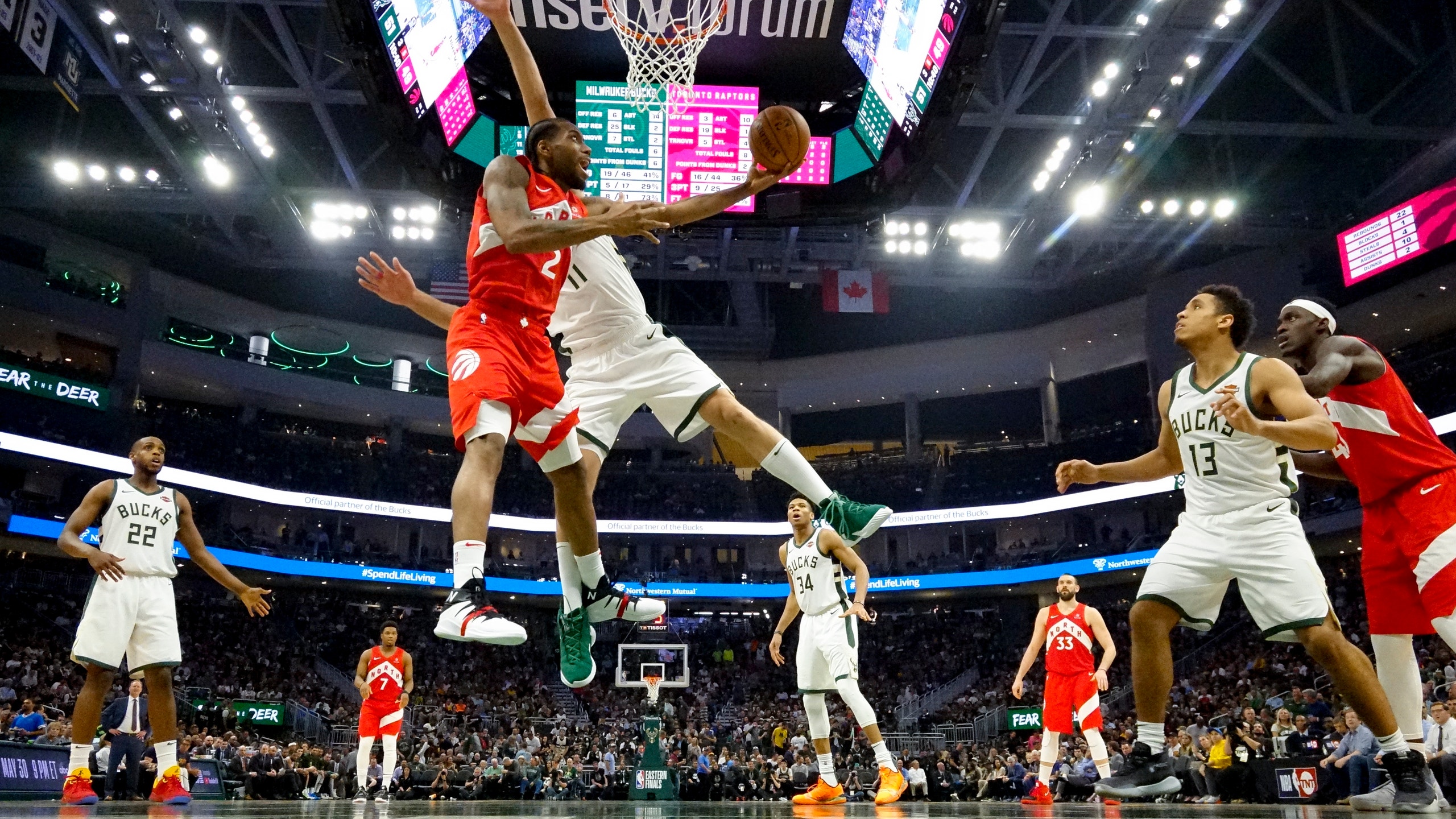 Column: Raptors one-and-done gamble on verge of paying off

This is what the Toronto Raptors had in mind all along.

When they went all-in with the trade for Kawhi Leonard, they knew his time in the Great North was likely to be short.

But this one-and-done gamble will certainly be worth it if Leonard can lift his team to five more wins.

Don't bet against him.

Leonard is playing better than anyone on the planet at the moment, essentially taking the Raptors on his sturdy shoulders and carrying them to the brink of the first trip to the NBA Finals in franchise history.

After falling behind 0-2 against the top-seeded Milwaukee Bucks, Team Kawhi has won three straight to set up a possible clinching game at home on Saturday night.

"I'm in the moment right now," Leonard said after another dazzling performance in Game 5.

Indeed, these are the moments he lives for, essentially treating the regular season as a six-month tuneup for the games that really matter. When he captured his first title with the San Antonio Spurs back in 2014, he was MVP of the NBA Finals against Miami's Big Three of LeBron James, Dwayne Wade and Chris Bosh.

Of course, Leonard had a nasty falling-out with Gregg Popovich and the Spurs, forcing a trade that landed him in Toronto last summer.

Now, after navigating a regular season in which his workload was tightly monitored, a tactic that some critics felt was the Raptors' way of trying to keep Leonard happy and boost their chances of re-signing him this summer, he has fought through a nagging leg injury to give his new team the sort of playoff bravado it never had before.

When the Raptors lost their very first game of the postseason at home to lowly Orlando, Leonard wouldn't let them fold.

When the Raptors fell behind the swaggering young 76ers in the second round, Leonard wouldn't let them fold.

When the Raptors dropped the first two games in Milwaukee, Leonard wouldn't let them fold.

Through 17 games this postseason, he is averaging 31.4 points and 8.4 rebounds while shooting just over 51 percent from the field. Leonard already hit a series-winning shot for the ages in Game 7 against Philadelphia, the one that bounced around the rim four times before dropping through, but that now seems like just a prelude to even bigger things.

The Bucks had no answer for Leonard in their latest setback, watching helplessly as he scored 35 points, dished out nine assists, snatched seven rebounds and forced a couple of steals — all while turning the ball over just a single time in Toronto's 105-99 victory.

"He gets stronger as the fourth (quarter) wears on," Raptors coach Nick Nurse said. "He wants the ball, and he wants to make the plays, and he seems to be making the right play for the most part. You're almost shocked when he pulls up at 15 feet and it doesn't go in."

More important, Leonard is making everyone around him better.

"He's playing at both ends," Nurse said. "It really gives the rest of the guys a lot of confidence when you've got a guy playing like that."

Leonard arrived in Toronto looking to put some salve on his reputation after that ugly divorce in San Antonio.

He sparred with coaches, teammates and the medical staff over a quadriceps injury, seeking out a second opinion from his own doctors after the Spurs cleared him to return to the court. His fate was essentially sealed after reports of a players-only meeting in the final weeks of the regular season turned tense and emotional, but failed to change his mind.

Reeling from another postseason flop, Raptors President Masai Ujiri decided to make the boldest move in the franchise's nearly quarter-century of existence. Even though they posted the best record in the Eastern Conference last season with a franchise-record 59 victories, none of it mattered when they were swept out of the playoffs in the second round by King James and the Cavaliers.

Leonard had only one year left on his contract and was sure to test free agency. But Toronto couldn't stand pat any longer, handing over popular leading scorer DeMar DeRozan and a first-round pick to the Spurs.

It was a steep price to pay for what may be only "One Dance" (sorry about that, Drake).

In the end, no matter where Leonard ends up next season, it might go down as one of the NBA's greatest bargains.

Leonard has reclaimed his rightful place as one of the league's best players, guaranteeing himself a massive payday.

The Raptors have their best shot ever at that elusive ring, needing one more win to earn a spot in the finals against the two-time defending champion Golden State Warriors.

"It's a great opportunity," he said. "Just come in, have fun, try to execute the best I can and play confident, and whatever happens after that is what happens. I know that I put the work in. I can live with the results because I'm having fun and I'm putting my all out on the floor."