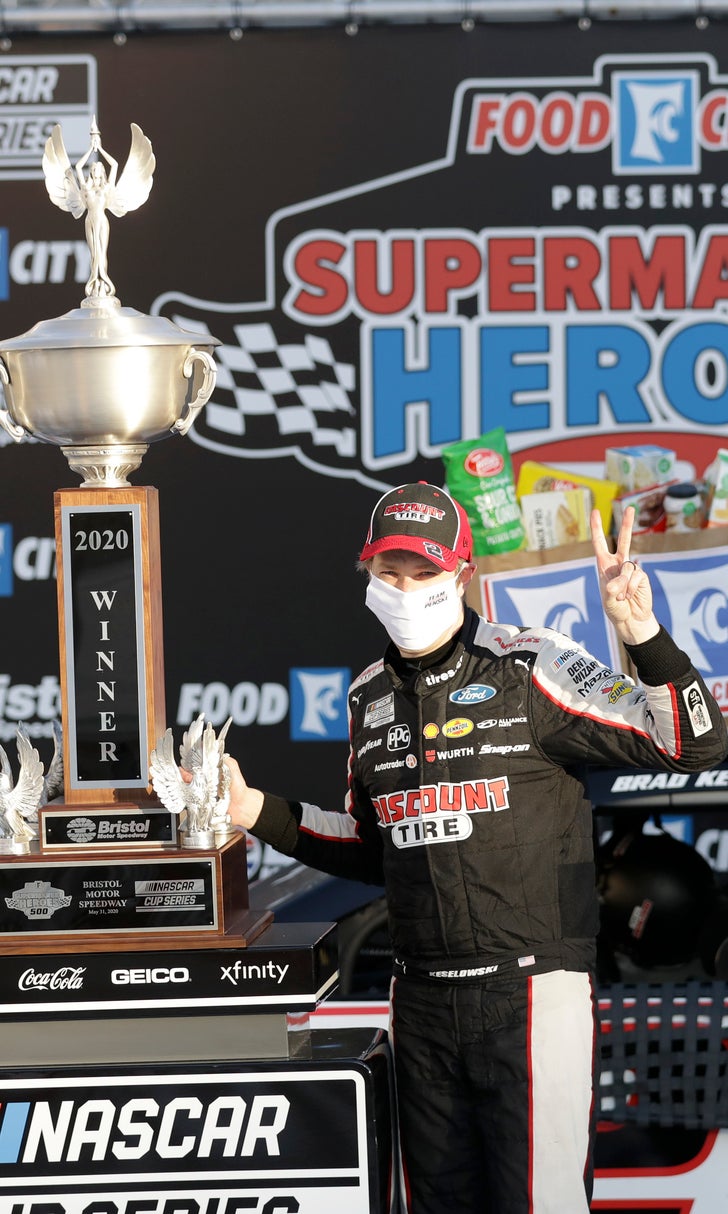 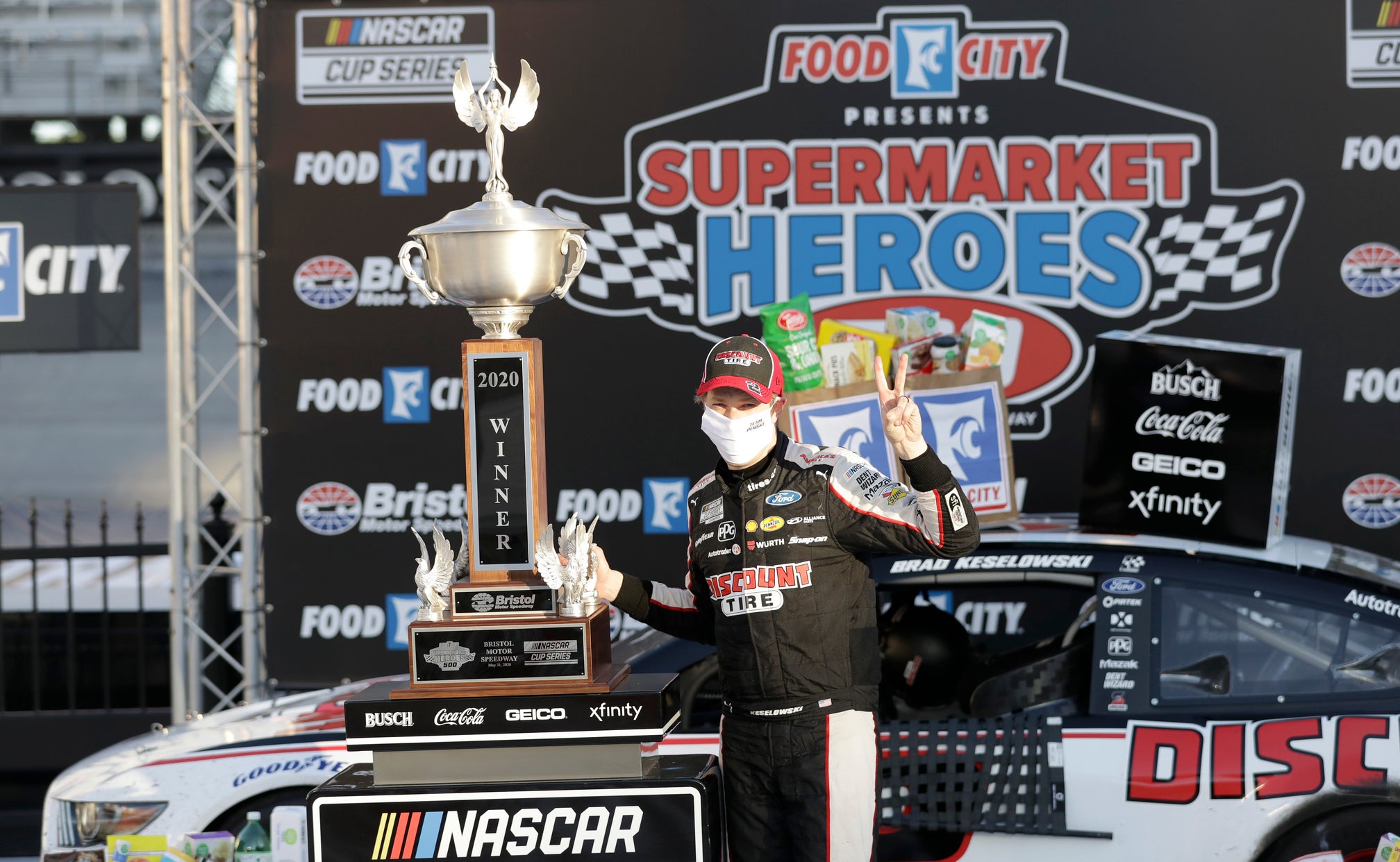 Another win falls into Keselowski's lap in final moments

BRISTOL, Tenn. (AP) — Brad Keselowski has a new crew and is fighting for a new contract at Team Penske. His confidence is still intact and he's convinced he can compete for a championship this year.

Being in the right place at the right time is helping.

Keselowski inherited his second win in a week when the leaders crashed in front of him with a lap remaining Sunday at Bristol Motor Speedway. He won the Coca-Cola 600 seven nights ago at Charlotte Motor Speedway when a caution with two laps remaining helped him get to victory lane.

“I felt like I was in Las Vegas,” Keselowski said about the Bristol win. "I went from having a bad hand to a full house real quick.”

The victory dropped into Keselowski's lap when Chase Elliott and Joey Logano collided as they raced for the win. Keselowski was third with a lap and a turn remaining when opportunity opened. Logano cleared Elliott for the lead with three to go, but Elliott stalked him while seeking his second win in three days.

They made contact in the fourth turn and drifted into the wall as Keselowski slid past. He had just one trip around the 0.533-mile concrete bullring to close the victory.

“We were in position and able to strike when it counted,” Keselowski said. "Joey and Chase got together there. I don’t know what all caused it, but we were just in position to strike and here we are in victory lane.”

Keselowski, hoping to get an extension with Team Penske, won the 600 when a caution with two to go snatched the win from Elliott. Keselowski inherited the lead when Elliott pitted.

Keselowski held on for that victory at Elliott's expense and now is the first driver to win multiple races in the five Cup events since NASCAR resumed May 17.

“There's so much going on in the world, I am just thankful I get to be a race car driver and do this,” Keselowski said after giving Ford its third win in five races.

Logano stared Elliott down as the two climbed from their cars but Elliott never looked in his direction. After Logano had retrieved his mandatory face mask, he approached Elliott for a brief conversation.

Elliott did take the blame after the talk.

"Awww, just going for the win," Elliott said. “I'll certainly take the blame. I just got loose and got into him.”

Clint Bowyer was second for his best finish in a year and a 1-2 finish for Ford and lamented how quiet it was after NASCAR's fifth event without fans. The track is built like an arena, referred to as “The Last Great Colosseum” and can hold about 140,000 spectators.

“It’s starting to bother me," Bowyer said. “We are seeing other racing going on with fans in the stands and a place like Bristol, it’s the first time I really felt like ‘Man, it’s empty.’ You can feel the vibe.”

The silence was most notable after Elliott and Logano had their incident.

“This place would have been standing on end, erupted,” Bowyer said. "Now it’s just like ‘OK, let’s go home.’ I’m ready for fans.”

Seven-time NASCAR champion Jimmie Johnson was third in a Chevrolet and once again showed he's close to snapping his 104-race losing streak. Johnson led laps in NASCAR's first race back after a 10-week shutdown from the coronavirus pandemic and was second in the Coca-Cola 600 before his finish was disqualified for failing inspection.

Kyle Busch and Erik Jones rounded out the top-five in a pair of Toyota's for Joe Gibbs Racing. Denny Hamlin, another JGR driver, seemed to be poised for the win until a lapped car clogged the track, Hamlin went too high to make the pass and Logano and Elliott squeezed past.

Hamlin then wrecked for the 17th caution of the race. It set up a final five-lap sequence.

“So much beating and banging," Keselowski said. "We’ve all been cooped up in our houses too long. Everybody is mad at everybody.”

Ryan Blaney had a strong car early and led 60 laps but crashed while chasing teammate Keselowski for the lead in the second stage. Blaney seemed to get too high on the track, wiggled into the wall and then was hit by Ty Dillon.

Blaney went to Bristol coming off back-to-back third-place finishes but wound up last.

“I didn’t think I was that high and all of a sudden I hit a slick spot,” Blaney said. “I thought we were going to be OK and then we got destroyed about six seconds later. That’s just Bristol.”

It was another rough race for Ricky Stenhouse Jr., who rebounded from three poor finishes with a fourth-place Thursday night at Charlotte. He was running decently near the end of the stage until contact from Johnson triggered a multi-car accident and knocked four drivers, Stenhouse included, out of the race.

“We just got crashed,” said Stenhouse, who wrecked on the first lap of NASCAR's first race back. “It was a bummer. I felt like we had a really good shot at racing them for the win.”