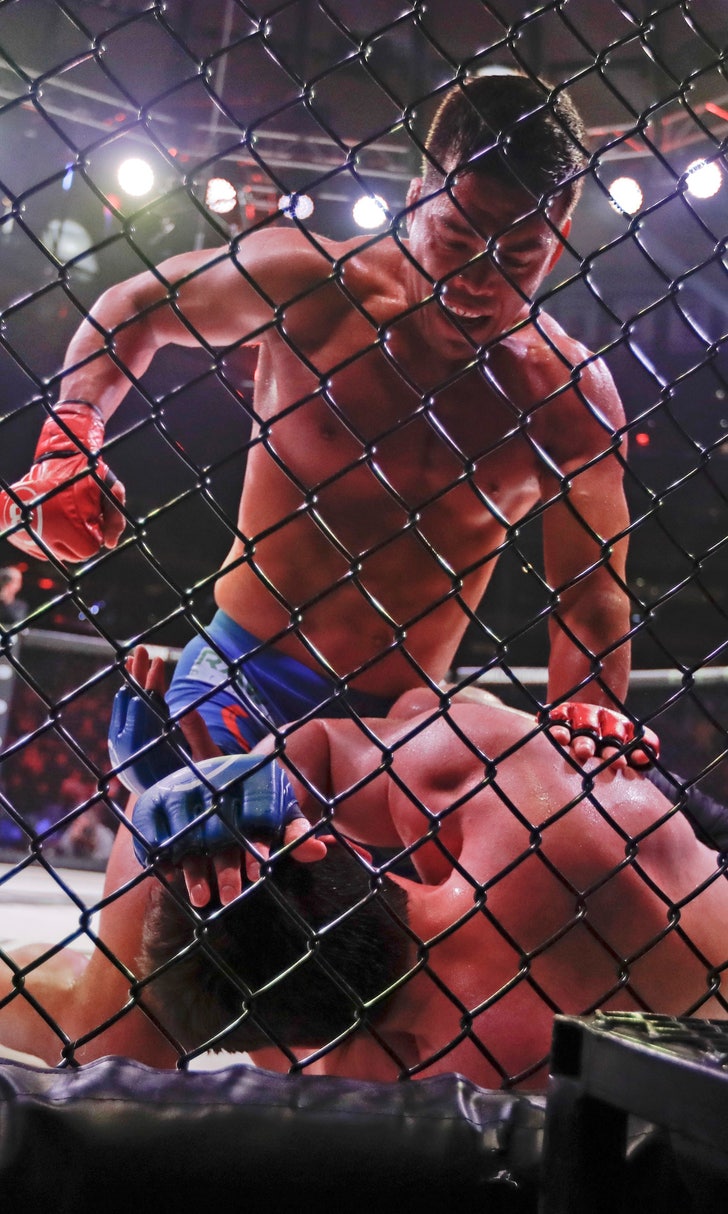 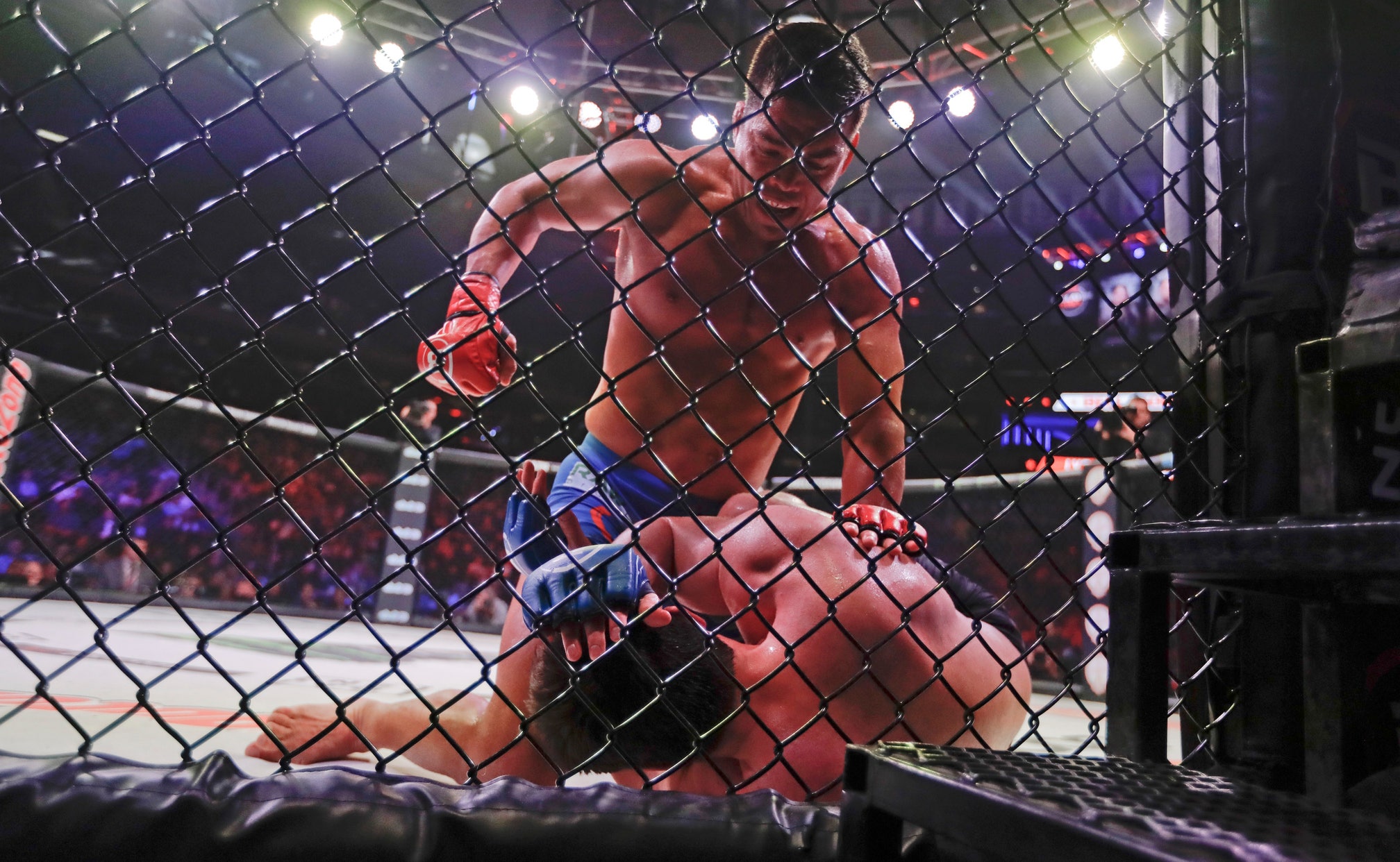 MacDonald shook off his crisis of conscience and defeated Neiman Gracie by unanimous decision to retain his welterweight championship on Friday night in the main event of Bellator's return to Madison Square Garden. MacDonald (21-5-1) had second thoughts about continuing in MMA after a draw in his last fight in April, saying "I don't have that killer (instinct) inside," and it was harder to "pull the trigger."

MacDonald, who moves on to face Douglas Lima in the Welterweight Grand Prix final for $1 million, said coming into the 170-pound fight that he found clarity to continue through his faith and did not consider retirement. The 29-year-old MacDonald didn't dish much punishment over five rounds but hardly absorbed any either from Gracie (9-1) and won 49-46 and two judges scored it 48-47.

"I'm honored to be able to compete in an arena like this in New York City," he said.

MacDonald connected on a right hook early in the third round that appeared to lead to swelling around Gracie's left eye. But that was about it, and MacDonald was left to face off with Lima inside the cage to hype their bout in September. MacDonald beat Lima for the welterweight crown in January 2018.

Former UFC light heavyweight champion Lyoto Machida made quick work of Sonnen to win a light heavyweight bout in the co-main event. This one between two 40-something stars was well past its expiration date for a quality fight. But Machida (26-8) dominated in the brief time he was in the cage. Machida connected with a flying right knee that drilled Sonnen right in the face and pounded away until the first round ended. Machida opened the second round with another devastating knee and the bout was stopped for the TKO victory.

The 41-year-old Machida (13 wins by KO or submission) set himself up for a potential bout with light heavyweight champion Ryan Bader.

Sonnen, another former UFC star, left his gloves in the cage and said he would retire from the sport .

"I had a hell of a lot of fun," Sonnen said to a cheering crowd. 'I'm walking out. I appreciate the memories."

Sonnen said he no plan to retire until he lost the bout and had hoped to call out Bader. But a couple of stiff knees to his face helped convince him it was time to go out in the cage and on his terms.

"It's somebody else's turn," Sonnen said. "You've got to be tough in this sport and I feel like I used all my toughness up."

He made his pro debut in 1997 and his UFC debut in 2005. He fought for the middleweight and light heavyweight title but left the promotion without the championship and his loss Friday was his third in five Bellator fights. Sonnen's career suffered a serious road block when he flunked three drug tests in five years that forced him to announce his retirement and cost him a broadcasting job with Fox. He rebounded with a gig at ESPN and ended a 3 1/2-year layoff with his Bellator debut against Tito Ortiz in January 2017.

"I used to be tougher. I used to want it more," Sonnen said. "I have no regrets in my career. I only remember the good days."

MMA legend Fedor Emelianenko was at MSG and signed a multi-fight deal as part of a farewell tour. Emelianenko, maybe the greatest fighter to never sign with UFC, lost his last fight and the days when he ruled in Japan as one of MMA's most dynamic fighters and top heavyweights are behind him.

Rizin bantamweight champion Kyoji Horiguchi became a two-promotion champion when he defeated Darrion Caldwell for Bellator's 135-pound world title. Even with UFC star Dominick Cruz in his corner, Caldwell couldn't rally to avenge a loss in his first showdown against Horiguchi in Japan. The 28-year-old Horiguchi (28-2) choked out Caldwell in the first matchup held inside a ring instead of a cage, and fought in the United States for the first time in five years as part of this unique promotion vs. promotion matchup.

Horiguchi is contractually obligated to defend the Bellator title once a year, and he had thousands fans at the Garden going wild when he was announced as the new champ.

Juan Archuleta connected with a hard right that KO'd Eduardo Dantas in the second round and left the Brazilian out cold. Dantas was on his back for several minutes and tended to by medical personnel. He eventually sat up and was helped out of the cage, the hapless victim of the knockout of the night .

On the undercard, Larkyn Dasch's Bellator debut was a bust. The Hooters waitress — she signed her contract in uniform during a break in her shift at a location in Michigan — lost a unanimous decision to Valerie Loureda.

Rapper 50 Cent (with cageside champagne bottle service) and former NFL great Herschel Walker were among the celebrities in the house for Bellator's return to New York.