Inside the complete overhaul of Jason Heyward's struggling swing

This story originally appeared on FoxSports.com.

MESA, Ariz.—Dec. 5, that’s when he started, less than five weeks after the Cubs won the World Series. Jason Heyward was not messing around. He had moved to the Phoenix area so he could be closer to the Cubs’ training facility and focus on remaking his swing.

“He was humbled from last year and wanted to work, wanted to get better,” Cubs assistant hitting coach Eric Hinske said. “Sometimes it takes a tough year to want to make a change. He’s a proud dude. He wants to be great. It really hurt him, the year he had last year.”

No longer would Heyward twist his top hand and wrap the bat around his shoulder. His bat angle would be more vertical, removing the tension from his shoulders. He would lower his hands to be in a more relaxed position and move his lower half first, allowing his hands to work.

Drill after drill, day after day, week after week, Heyward worked to undo all of his old habits and establish muscle memory with his new. He’s 0-for-8 thus far in Cactus League play, yet Mallee said that he couldn’t be happier with his pupil’s new approach.

“He may be better than (he ever) was,” Mallee said. “I’m very happy for him. His mind is in the right place. He has done a lot of mental stuff. It’s really special what he has put into this.”

“I’ve never seen a veteran player work as much as Jason did this winter, let alone right after winning a World Series and having already signed a long-term deal,” Epstein said. “It shows how much he cares, his dedication, his pride and his character. He’s the ultimate pro.”

Heyward, in his first year after signing an eight-year, $184 million free-agent contract, batted .230 with seven home runs and a .631 OPS—all career-lows. He struggled even worse in the postseason, and manager Joe Maddon held him out of the Cubs’ starting lineup for the first three games of the World Series.

What Mallee wanted was for Heyward to get back to where he was in 2012, when he had his best offensive season, hitting 27 homers for the Braves with an .814 OPS.

“Over time, things creep into your swing that you don’t even recognize,” Mallee said. “He had such success with batting average since '12”—Heyward batted .273 from 2012 to '15—“that not many people would say things to him.”

Consider this video that Cubs mental skills coordinator Darnell McDonald, a former major league outfielder, posted on his Instagram account during the off-season.

Heyward’s hands are lower than they were last season, closer to his body. His bat is more vertical. He’s shorter to the ball, and his follow-through is stronger.

“I’m not taking my hands behind my head, wrapping. When you wrap, with your first move to get the bat head out, you have to go around. As a hitter, you don’t want to do that. You want to stay right down the line. And when you stay down the line, you give yourself more room for error.

“You’re going to get fooled sometimes. Sometimes you’re going to get beat. But if you put on a good swing and you miss or go inside the baseball instead of around and on the ground, there are a lot more hits in there.”

Heyward, 27, did hit into some bad luck last season, batting .266 on balls in play, 34 points below the major-league average. But it wasn’t as if he was lining into out after out—his average exit velocity of 87.4 mph also was well below the league average.

So, when he got back to work in December, he trained as if he were trying to earn a contract when he already had one of the 15 largest in major league history.

His day would begin at 10 a.m. Heyward worked so feverishly on his running, agility and strength that he astounded Cubs minor leaguers who assembled at the complex in January for strength camp. He also spent 60 to 75 minutes a day performing hitting drills, Hinske said.

Hinske, a teammate of Heyward’s with the Braves from 2010 to '12, worked with him three to four days a week. McDonald was a frequent presence. Mallee visited every other week.

Initially, the coaches simply wanted Heyward to develop a new routine, find what worked for him. He didn’t face actual pitching for at least a month, Mallee said.

“We had to slow everything down and start from scratch,” Mallee said. Take the chalkboard, wipe it clean, rewrite the formula, and rewrite it over and over and over again." 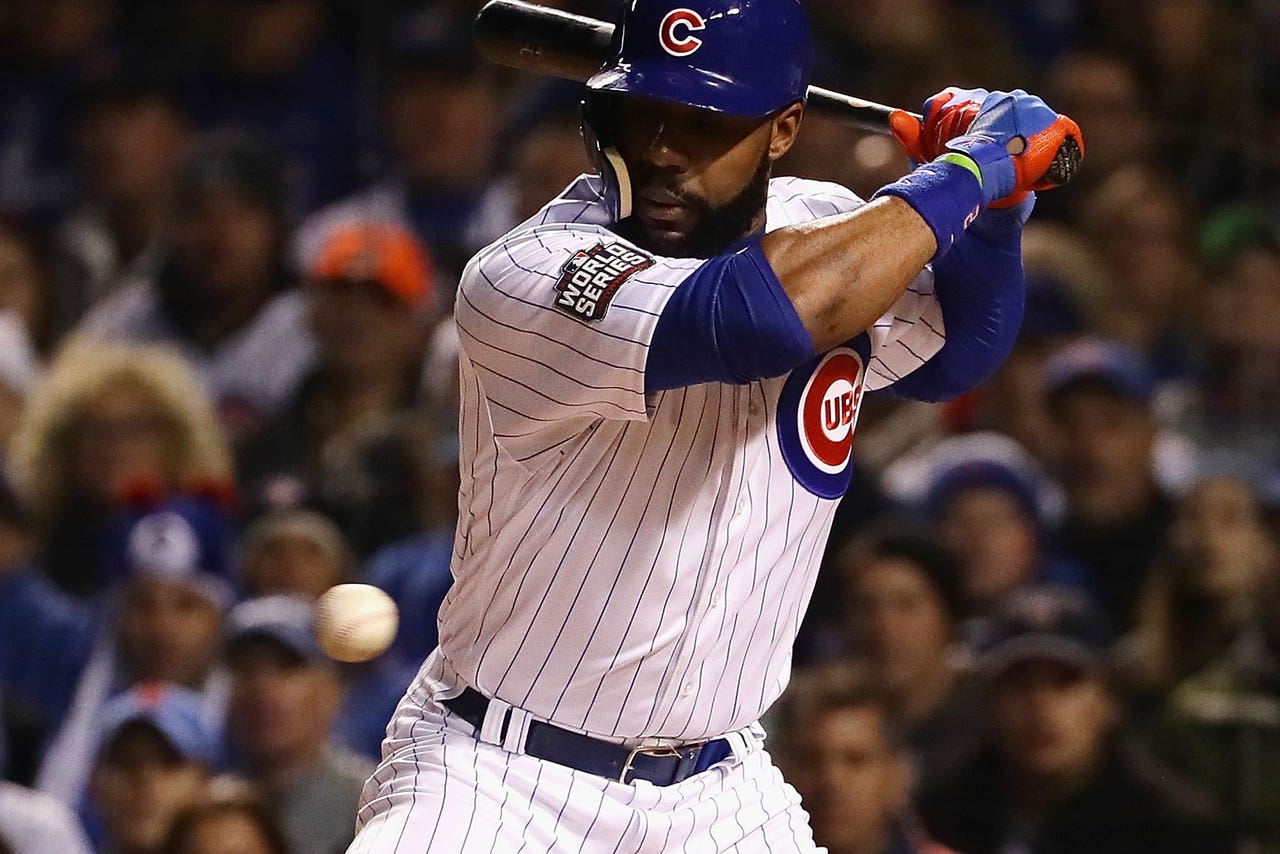 The process was pain-staking.

Heyward would work off a tee, then hit balls flipped to him. He did top-hand and bottom-hand drills, worked with short bats and longer bats, getting a feel for how to control the barrel with both. He also would do walkup drills, taking a couple of steps toward the ball to help his timing, help him hit the bottom half of the ball, get it in the air.

Then he would grab a regular bat.

“We only flipped the ball at his front hip pretty much—all balls dead inside,” Hinske said. “He was coming around the baseball. He had to work inside of it, short to it initially, get that wrap, that top-hand twist and bat angle better.”

Hitters perform various drills during the season, but in most cases they are simply tweaking, adjusting, trying to stay sharp. Sweeping changes are difficult to accomplish; teams play nearly every day, and coaches work with 12 or 13 hitters at once.

The off-season is the time for more drastic modification, for deeper video study, for more intense instruction. Heyward, though, said it would be easier for him to adjust now that his new muscle memory is in place, now that he knows what he was doing wrong.

“To come out here, have this complex, have a coach with me all the time, it just made it simple,” Heyward said. “It was like, a picture perfect off-season that way. I could watch video. I could pay attention to detail. You cross everything off your list.

Ken Rosenthal is a senior writer for FoxSports.com and a field reporter for MLB on Fox.