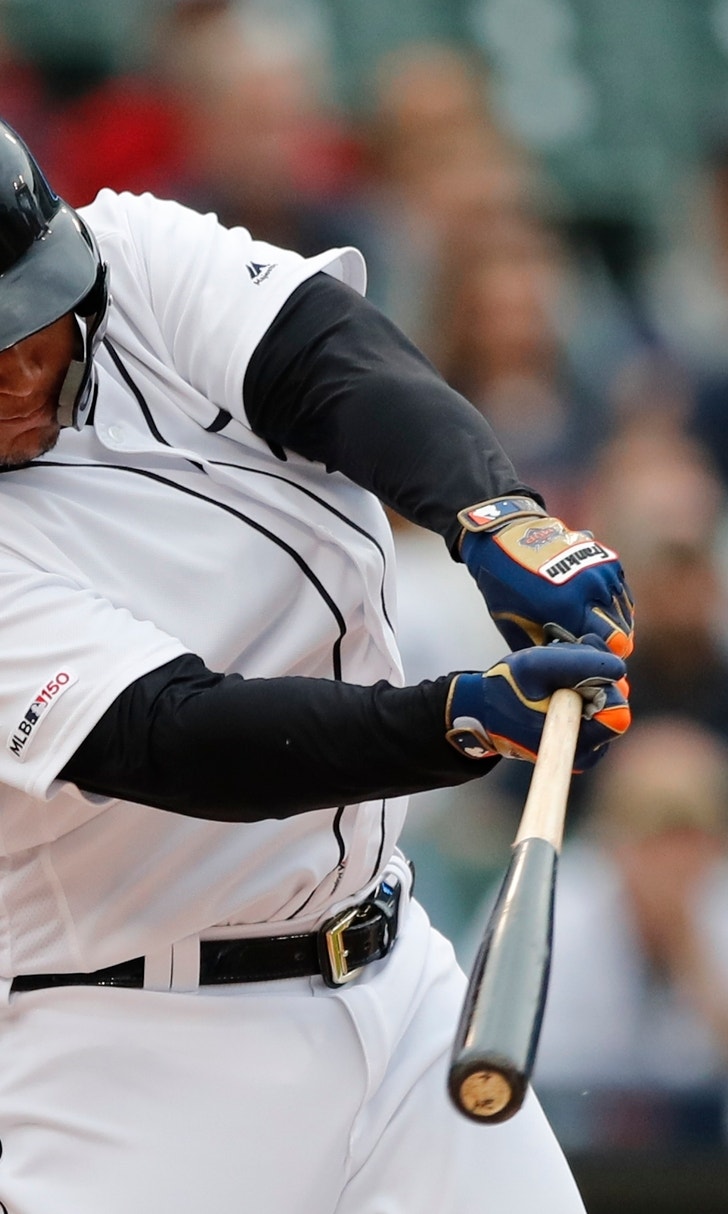 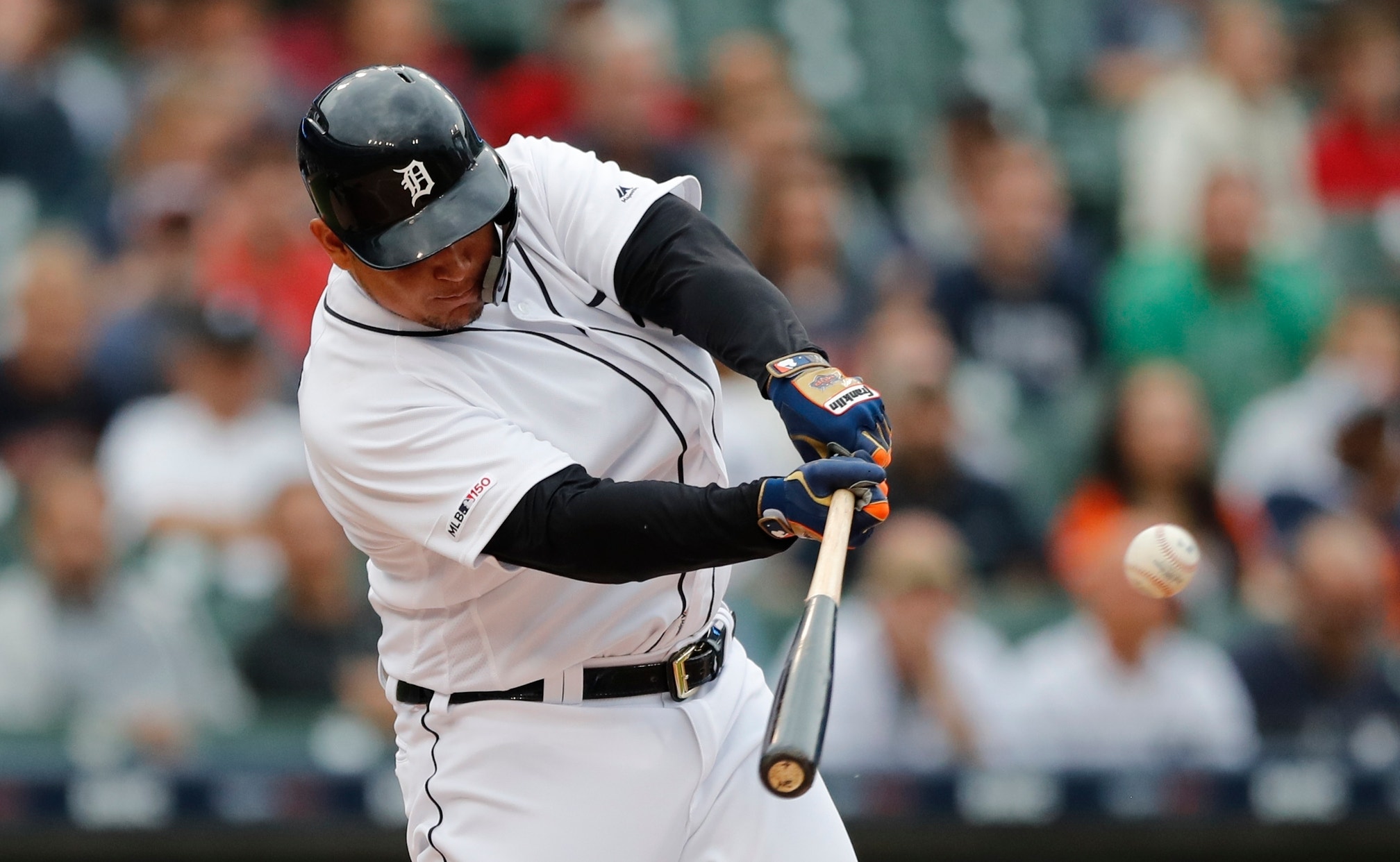 DETROIT (AP) — In a perfect world, Detroit Tigers manager Ron Gardenhire would have a healthy Miguel Cabrera at first base every game.

Until that day comes, however, Gardenhire's happy with whatever production he can get out of Cabrera.

After missing the previous two games with chronic knee pain and announcing that he will be a full-time DH for the foreseeable future, Cabrera had a grand slam in a three-hit, five-RBI game as the Tigers beat the Tampa Bay Rays 9-6 Tuesday.

"Believe me, this job is a lot more run when Miggy is out there," Gardenhire said. "He's a Hall of Famer, so I just have to write down his name, sit back and watch."

Team doctors considered surgery on Cabrera's right knee, but decided to see if he could manage the pain by not playing defense.

That wasn't great news — Cabrera still considers himself a first baseman — but he was thrilled to avoid the knife.

The Tigers overcame Willy Adames' grand slam and a two-run homer from Avisail Garcia to end a 10-game home losing streak. Detroit last won at home on May 8, and went 0-9 on a homestand from May 13-23.

"We needed this one," Gardenhire said.

Blake Snell (3-5) allowed six runs on seven hits and two walks in 4 1/3 innings. The six earned runs were one short of his career high, set on May 1 against the Kansas City Royals.

"That was frustrating, for sure," he said. "I've just got to be better. I've got to start putting up zeroes and winning games. Stuff like that."

The Rays have lost four straight after a six-game winning streak.

Ryan Carpenter (1-2) picked up his second career win, giving up two runs on seven hits in seven innings. Carpenter was drafted by the Rays in 2008 and 2011, but was released without getting to Double-A.

"When I found out I was going to be pitching against them, I got a big smile on my face, and it is bigger right now," he said. "They decided what they decided, and it has been a long road for me to get here, but tonight feels really good."

Shane Greene pitched the ninth for his 19th save in 20 tries.

Cabrera began the scoring with an RBI single in the first.

Garcia, who was mentored by Cabrera when he started his career in Detroit and now wears his No. 24, gave the Rays a 2-1 lead with a two-run homer in the third.

Christin Stewart tied the game with an RBI single in the fifth, and Nicholas Castellanos walked to load the bases for Cabrera. He fell behind 0-2 before hitting a curveball into the Tigers' dugout for his fifth career grand slam.

"I thought I was going to get out of that inning, but I just never did," said Snell, who came out after the grand slam. "I threw him a good pitch, but I think I threw him too many curveballs."

Cabrera singled in the seventh and received a standing ovation when he was removed for a pinch runner. Dawel Lugo hit a two-run triple later in the inning and made it 9-2 when he scored on a passed ball.

The Rays loaded the bases in the eighth on two walks and a hit batter. Adames made it 9-6 with his fifth homer of the season and first career grand slam.

Like Garcia and Carpenter, Adames was facing the organization where he started his career. He went from Detroit to Tampa Bay in the 2014 trade for David Price and was playing his first game at Comerica Park.

"This was special, because it was my first time here," he said. "I got to see some of my ex-teammates and I got to see Miggy.

"He's kind of everybody's idol, so that was cool."

The Rays hadn't hit a grand slam and allowed one in the same game since Sept. 25, 2007, when they beat the New York Yankees 7-6 in 10 innings. Alex Rodriguez hit New York's grand slam, while Jorge Valendia did it for Tampa Bay.

Tigers: 2B Josh Harrison will require surgery on his hamstring and is expected to miss 6-8 weeks. With Cabrera unavailable in the field, SS Jody Mercer still sidelined with a right quad strain and 3B Jeimer Candelario on the injured list with a shoulder problem, the Tigers are using Brandon Dixon at first, Ronny Rodriguez at second, Niko Goodrum at short and Lugo at third.