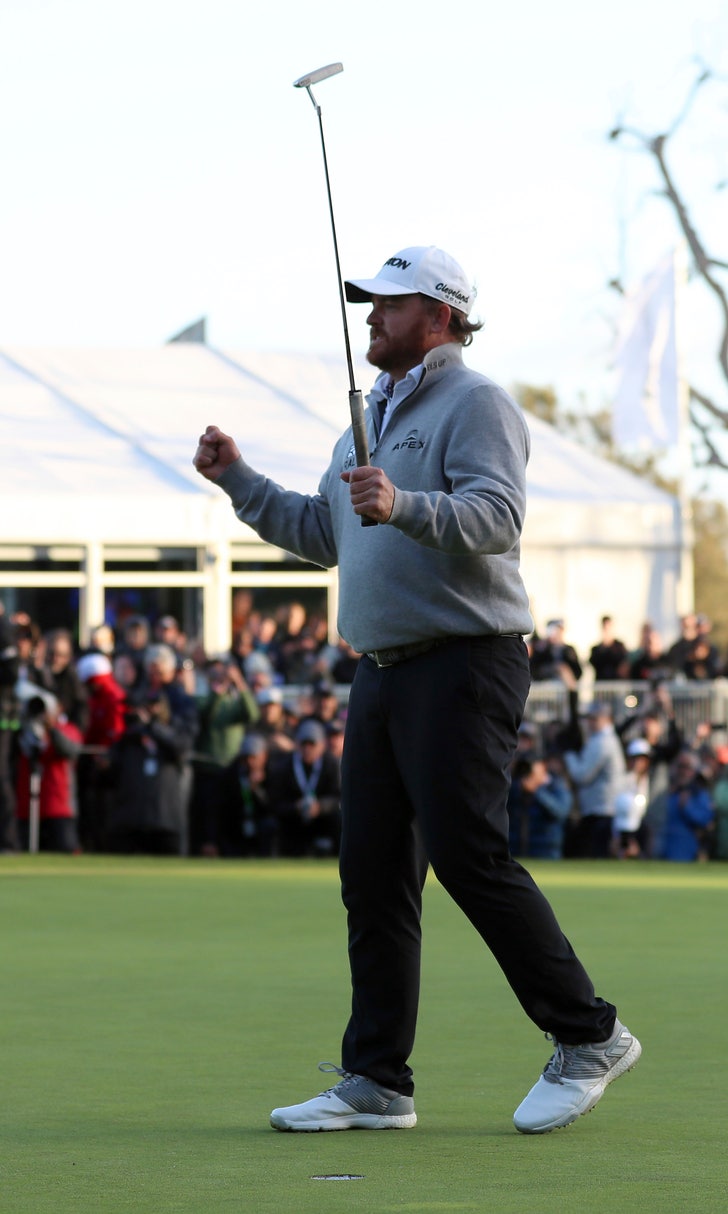 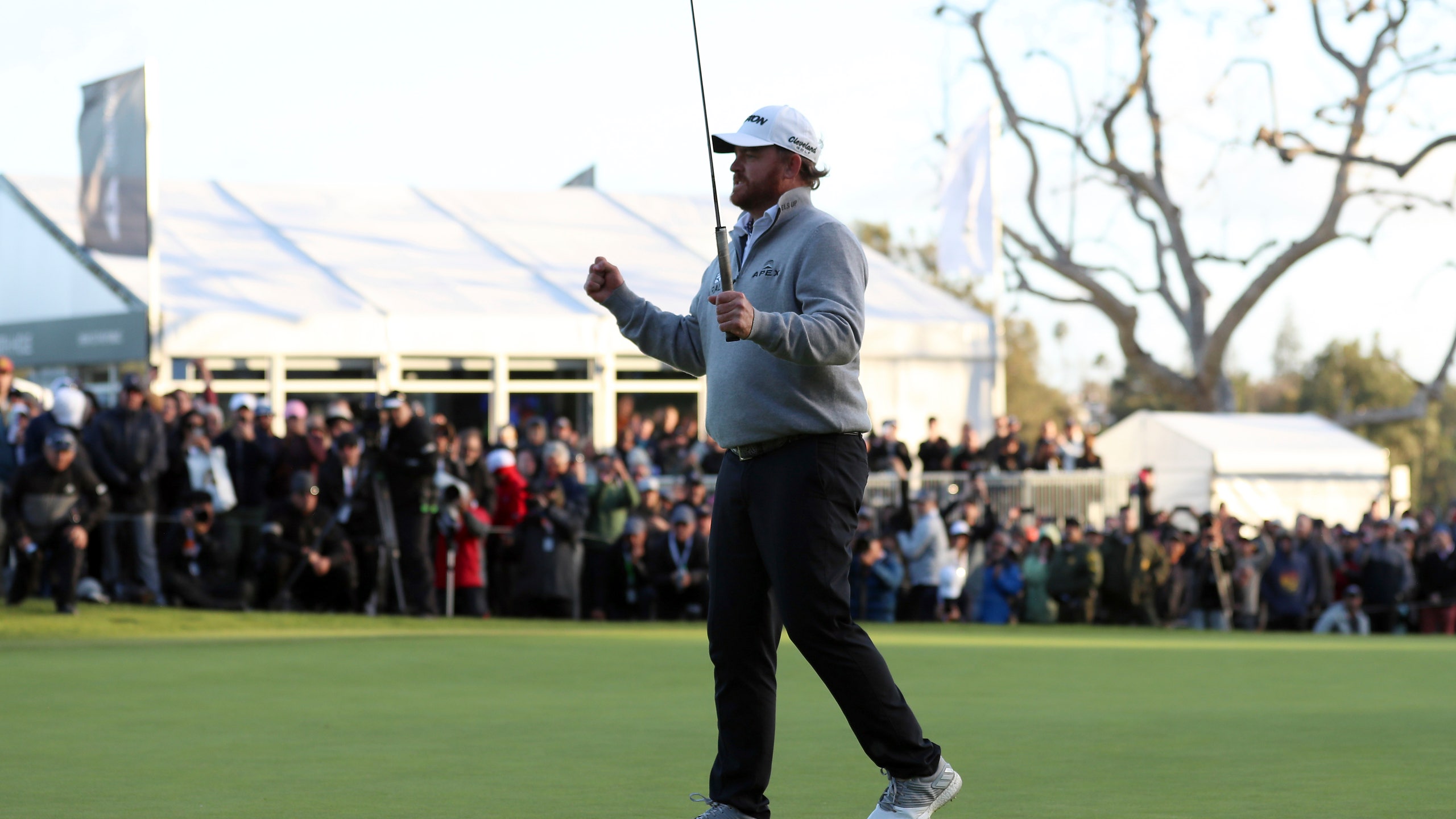 LOS ANGELES (AP) — J.B. Holmes rallied from a four-shot deficit in the final round and won a marathon finish Sunday in the Genesis Open for his first victory in three years and a trip back to the Masters.

Holmes closed with a 1-under 70, and that was enough to overcome Justin Thomas, who took 19 putts on the back nine at Riviera — three of them from 8 feet when he lost the lead for good — and shot 75.

"I knew it was going to be very difficult to shoot a low score," Holmes said. "I needed some help from Justin."

They played 34 holes because of a seven-hour rain delay at the start of the tournament Thursday, and that wasn't even the worst of it. The final day featured a wild shift in weather, from sunshine in the morning to complete 16 holes of the third round, brief rain when they teed off in the final round and wicked wind that made it tough to hole putts.

There were three two-shot swings on the back nine, all because of putting.

The biggest moment was on the 13th hole, when Holmes was one shot behind and made a 12-footer for par. Thomas, who had lagged his birdie putt from 65 feet to 8 feet from the cup, three-putted from there for a double bogey to fall one shot behind.

He three-putted the next hole to fall back further, made an 8-foot birdie on the 16th to get with one but couldn't catch up.

Holmes had his problems, too. Right when he took the lead for the first time — a birdie on the par-4 10th and a three-putt bogey from long range by Thomas — Holmes turned birdie into a shocking bogey when he three-putted from 3 feet.

Thomas, who looked sharp as ever in the morning in his round of 65 to build a big lead, missed a 6-foot birdie putt that would have tied for the lead at the par-5 17th after Holmes three-putted for par from 30 feet. He had one last chance to force a playoff, but his 20-foot birdie putt broke off to the right.

Tiger Woods shot 65 to finish his morning third round, though he was never in range of winning. Woods closed with a 72 in the afternoon, and tied for 15th.

ADELAIDE, Australia (AP) — Nelly Korda won the Women's Australian Open to add to her family's impressive sports pedigree Down Under.

Korda, who went into the final round at The Grange Club with a three-shot lead, stretched it to as many as five. She shot a 5-under 67 and finished at 17-under 271 for a two-shot victory over defending champion Jin Young Ko, who shot a 64.

"I'm just happy to finally be a part of the club," said the 20-year-old Korda at the trophy presentations. "There's maybe something in the air here. We love coming down under and we really enjoy our time here.

Jimenez closed with a 5-under 66 at The Classics at Lely Resort to match Langer and Browne at 13-under 200. Langer shot 68, and Browne had a double bogey on the par-4 18th in regulation for a 66.

Jimenez has won in each of his six seasons on the 50-and-over tour. The 55-year-old Spaniard won the major Regions Tradition and Senior British Open last season.

Kevin Sutherland and Woody Austin each shot 69 to finish a shot out of the playoff.

PERTH, Australia (AP) — Ryan Fox of New Zealand won his first European Tour title with a 3-and-2 victory over Adrian Oategui of Spain in the final of the World Super 6 Perth.

Fox was 8-under par in 54 holes of stroke play to earn a bye into the six-hole match-play portion of the event. On Sunday, he outlasted Jazz Janewattananond after three shootout holes when their match ended in a draw, and then beat Kristoffer Reitan of Norway and Paul Dunne of Ireland, both 1 up, to reach the final.

He quickly went 3 up on Oataegui in the final, and won when they halved the fourth hole with pars.

Otagegui had to birdie the 18th hole Saturday to make it into the match play after an 11-man playoff.

LAKEWOOD RANCH, Fla. (AP) — Mark Hubbard won the LECOM Suncoast Classic for his first Web.com Tour title, closing with a 5-under 67 for a two-stroke victory over Maverick McNealy.

Hubbard finished at 26-under 262 at Lakewood National Golf Club. The 29-year-old former San Jose State player opened with rounds of 65, 66 and 64.

Phillip Eriksson closed with a 4-under 68 for a three-shot victory in the Dimension Data Pro-Am on the Sunshine Tour. Eriksson birdied his last hole on the Mantagu course at Fancourt to finish at 21-under 267 and tied the tournament scoring record.