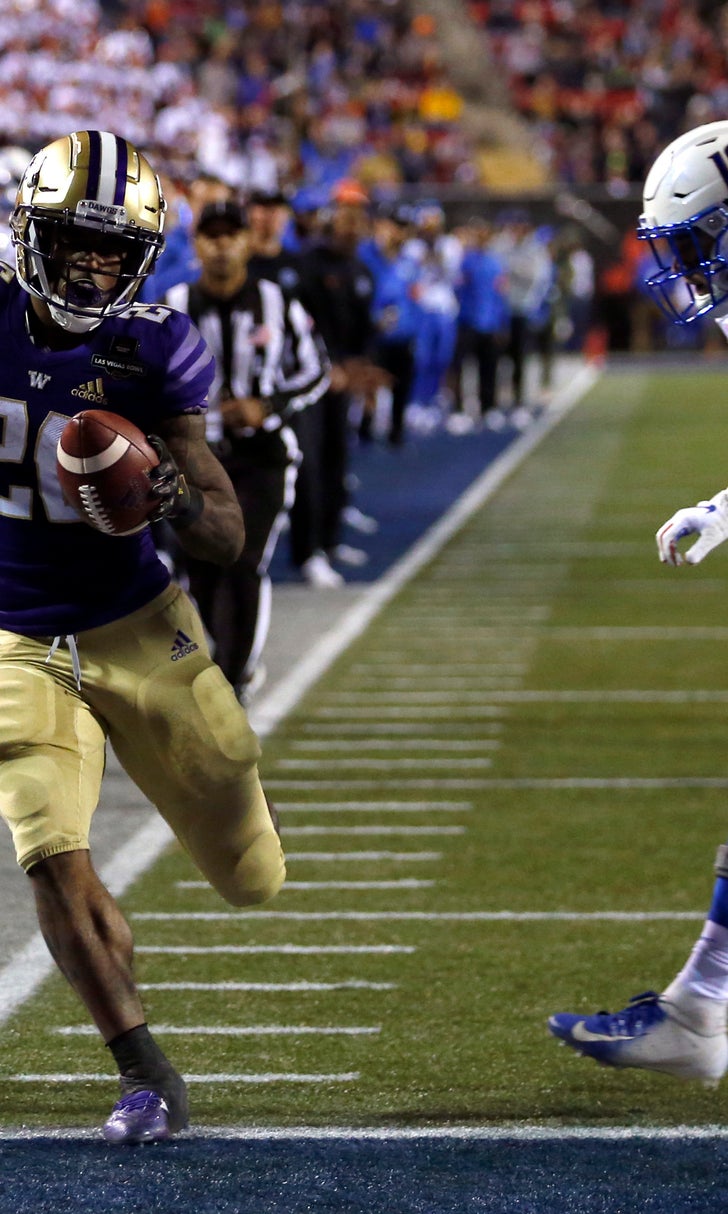 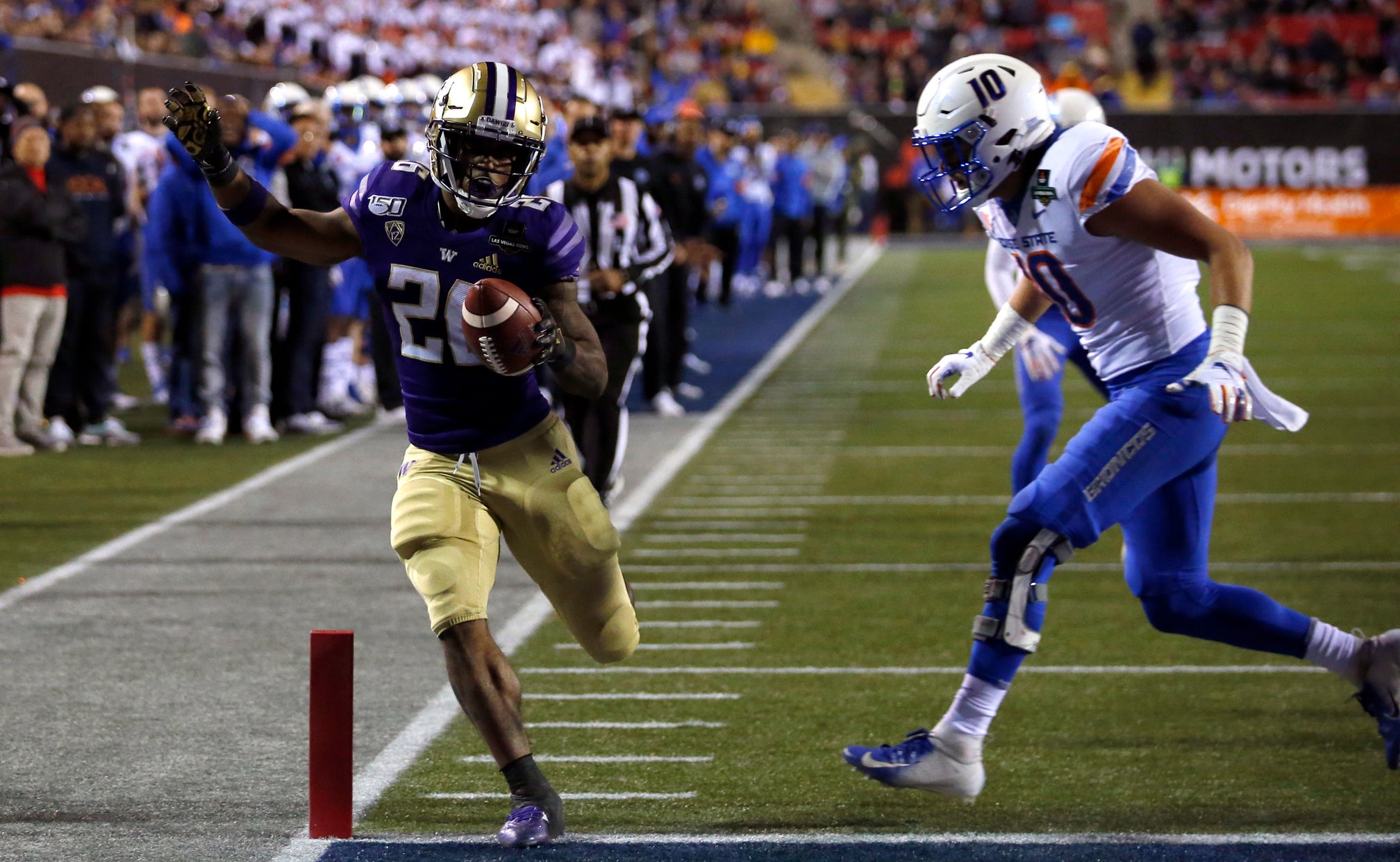 LAS VEGAS (AP) — The Las Vegas Bowl was always going to be about Chris Petersen. It was his final game as coach, a matchup the two programs he led to such great heights in Washington and Boise State

It could have been his moment, but the humble Petersen went out of his way to share his last spotlight after a successful finale.

Jacob Eason threw for 210 yards and a touchdown, Elijah Molden was named MVP after intercepting a pass and forcing a fumble, and the Huskies sent out Petersen with a 38-7 victory over No. 18 Broncos on Saturday night.

That was certainly true as Petersen capped six seasons as Washington's coach and 14 years as one of the most successful leaders in college football.

Richard Newton rushed for 69 yards with a short touchdown run and threw a touchdown pass for the Huskies (8-5), and Salvon Ahmed added two touchdown runs. Myles Bryant added an interception, and six different defenders had a tackle for loss.

Together, they capped an erratic season with a dominant finale for Petersen — who left Boise State to coach Washington — after he announced Dec. 2 he was stepping down after six seasons. Defensive coordinator Jimmy Lake will take over as head coach.

Petersen brought Lake to the stage to help accept the trophy. Petersen then alternated between cracking jokes and assigning praise to players and coaches in his final press conference.

While Petersen was apprehensive about the all encompassing focus on himself leading up to the game, Molden said it was a “pretty good incentive” to play well for him and the seniors while also building momentum towards Lake's first season.

“Every game is important, but some games are more important,” Molden said. “We had a lot of weeks to kind of let this simmer. And then we went out there, we played well.”

The Huskies jumped out to a 17-0 halftime lead behind a methodical offense and suffocating defense, starting with an interception of Hank Bachmeier's pass that was thrown up for grabs on the opening possession and easily picked off by Bryant. Andre Baccellia took a slant from Eason 17 yards into the end zone for the opening score, and Washington never was seriously threatened.

By the time the Huskies went up 24-0 early in the third quarter on a 2-yard touchdown run by Newton after Molden picked off a screen pass by Bachmeier, the Broncos had been completely taken out of their game.

“Ultimately, it falls back on me, and the performance tonight, I mean, that's my fault,” Boise State coach Bryan Harsin said. “Obviously seven points is not what we put in 10 days of practice time to go out there and execute and achieve.”

Jaylon Henderson threw for 48 yards and a touchdown for the Broncos (12-2). They lost for the first time in five appearances in the Las Vegas Bowl. Henderson found George Holani on a 10-yard touchdown pass after replacing Bachmeier in the second half after the freshman threw his second interception.

Bachmeier, who started the first seven games before sustaining a hip injury against Hawaii, was 15 of 26 for 119 yards.

Boise State: The offense had no answers, but the biggest question will be about Harsin deciding to go with Bachmeier after Henderson had played so well down the stretch. Both interceptions came on throws Bachmeier should not have made, and the first pick allowed Washington’s offense to build confidence early. The Broncos defense had three sacks and nine tackles for loss, but they could never come up with a truly game-changing play.

Washington: The Huskies were clearly fired up to give Petersen a memorable finale, capping his tenure there with a record of 55-26. It was also one of their most complete performances in an up-and-down season, with the offense proving to be efficient enough to complement a tenacious defensive effort. Petersen got the Huskies back to the upper echelon of West Coast football by winning two Pac-12 titles and leaves a strong foundation behind for Lake.

Petersen isn't clear on what his next step will be, but he is looking forward to waking up Sunday as an ex-coach. “It's going to be awesome,” Petersen said. “And the next day after that is going to be awesome. Maybe in a month, it might not be so awesome, figuring out what to do next. But it's gonna be good for a while.”

It might be dicey after the blowout loss, but Boise State’s overall body of work in a solid Mountain West Conference should be enough to be ranked in the final poll. Washington could merit consideration in the preseason AP Top 25.

Boise State: The Broncos will have to rebuild on both lines of scrimmage, but they will be favorites to win the Mountain West for the third time in four seasons and the top challenger to dethrone the American Athletic Conference for the automatic bid to a New Year’s Six bowl. Boise State will open the 2020 season by hosting Georgia Southern on Sept. 5.

Washington: Lake will have to decide whether to make changes to the offensive coaching staff, but the Huskies will have the personnel to challenge Oregon in the Pac-12 North, especially if Eason returns for his redshirt senior season. Washington opens next season by hosting Michigan on Sept. 5 in what will be one of the Pac-12’s marquee nonconference games.