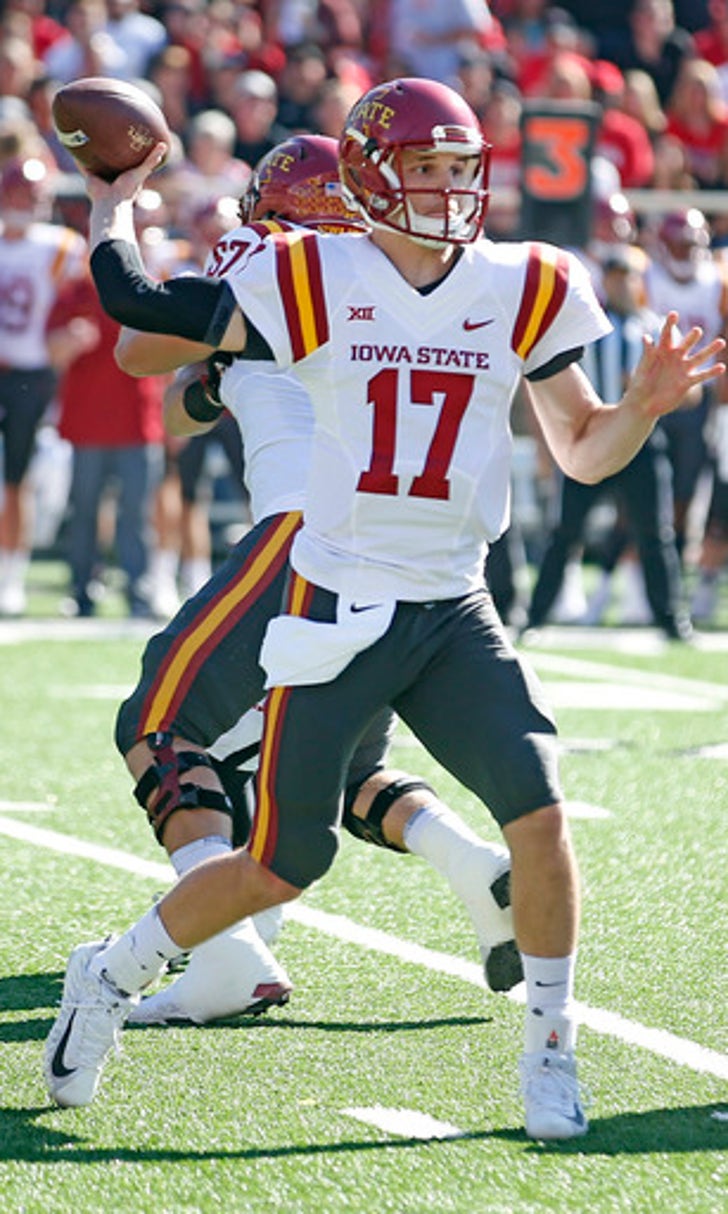 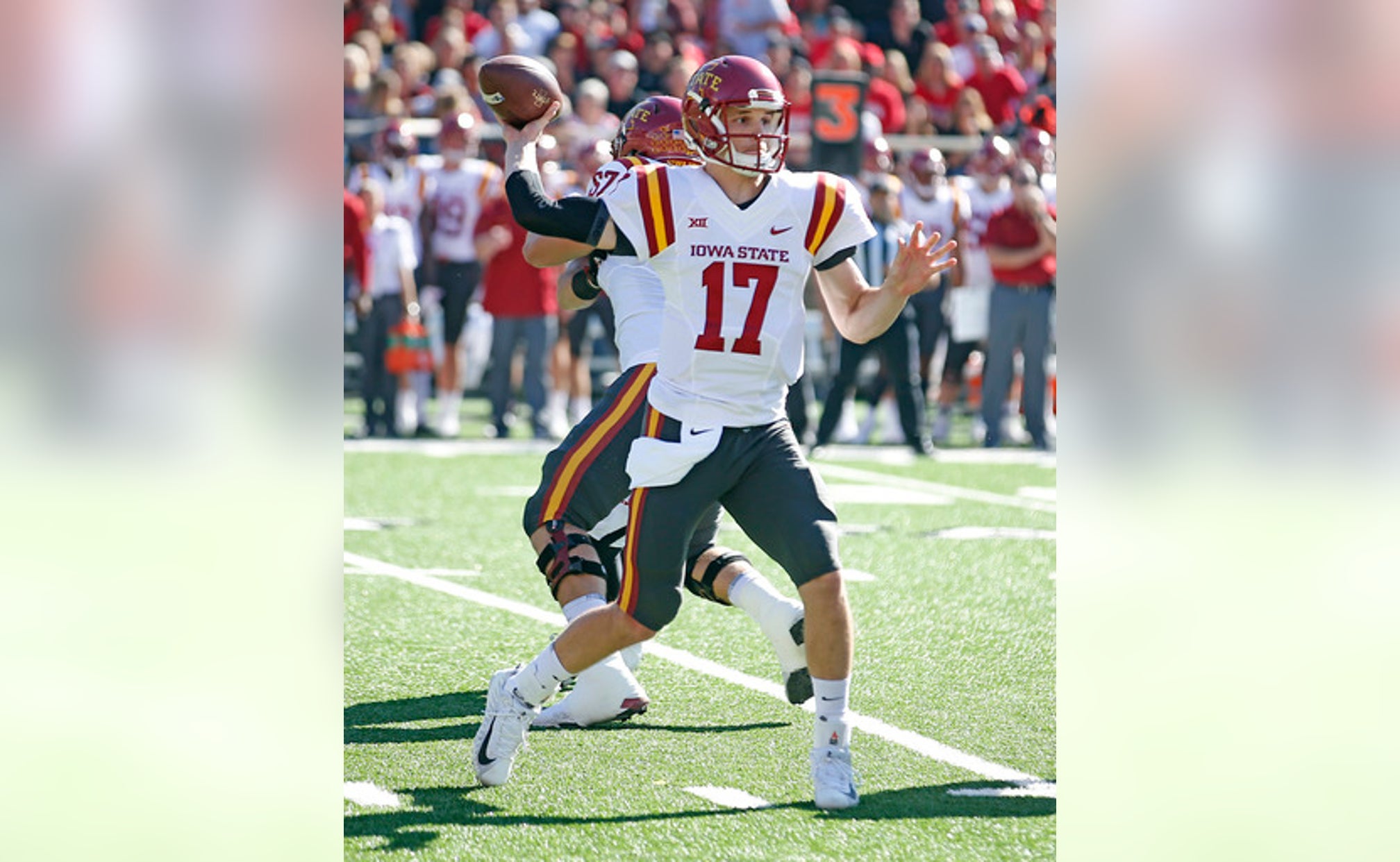 It's getting real in Ames.

Iowa State (5-2, 3-1) is off to its best start in 15 years and on Sunday entered The Associated Press poll for the first time since 2005, at No. 25. And this week the Cyclones play fourth-ranked TCU on homecoming for - get this - a share of first place in the Big 12.

Typically the Cyclones are playing out the string by late October. A 31-13 win at Texas Tech on Saturday offered more evidence that this isn't the same team that had not won more than three games in a season since 2012 and had finished ninth or 10th in the 10-team Big 12 in four of the six years since the conference ended its division alignment.

Cyclones fans can dare to dream of their team playing Dec. 2 in the Big 12 championship game at AT&T Stadium in Arlington, Texas. But first Iowa State must navigate a schedule that, after TCU, has it playing at West Virginia and hosting Oklahoma State (both are 3-1 in the conference). The Cyclones finish with road games against Baylor and Kansas State.

''Obviously, this is the most wins I've had in a season,'' senior receiver Allen Lazard said. ''We have to go out there and focus on the next game. Can't look at the bigger picture too much. We have to focus on our goal right now. If we focus on the task at hand, the rest will take care of itself.''

Iowa State's long-awaited resurgence has occurred under second-year coach Matt Campbell, who went 3-9 in 2016 and started 2-2 this season after close home losses to Iowa and Texas.

Now the Cyclones have won three straight conference games for the first time since 2011, starting with that magical afternoon in Norman on Oct. 7. Iowa State beat then-No. 3 Oklahoma 38-31, a victory that ended a longest-in-the-nation 20-game losing streak against ranked opponents and was its first against the Sooners since 1990.

Lazard, who grew up 45 miles from Ames in Urbandale and whose father played for the Cyclones in the early 1990s, said it dawned on him in the second half against Oklahoma that there was something different about this ISU team.

''We realized this is the No. 3 team in the nation. They've had all this history. Definitely way more talented than us,'' Lazard said. ''If we just stick together, play 11 as 1, we can play with any team in the country.''

Iowa State has survived a quarterback change necessitated when starter Jacob Park took a leave from the team to address what Campbell called ''personal medical concerns.'' Senior walk-on Kyle Kempt started his first game against Oklahoma and has completed 70 percent of his passes (53 of 76) for 659 yards, with seven touchdowns against one interception.

Kempt has a host of playmakers around him in running back David Montgomery and receivers Lazard, Trever Ryen, Hakeem Butler and Marchie Murdock. Montgomery has rushed for 92 yards a game, and each of the four receivers has more than 300 yards in receptions.

ISU and SMU are the only two teams in the nation that haven't lost a fumble, and at 35 points a game the Cyclones are on pace to have their highest-scoring offense since 1976.

The defense has been one of the best in the Big 12 and carried the day against Texas Tech, holding the nation's No. 4 scoring offense to season lows of 13 points, 207 yards passing and 336 total yards.

Marcel Spears ran back an interception 61 yards for a touchdown, and the Cyclones finished with 16 points off Tech turnovers. They lead the conference in turnover margin and are the least penalized team in the Big 12.

Joel Lanning averages 11 tackles a game and with Spears and Willie Harvey gives ISU one of the top linebacker units in the league, linemen J.D. Waggoner and JaQuan Bailey are a handful up front, and safety Kamari Cotton-Moya anchors as solid secondary.

With five games left, the Cyclones need one more win to become bowl eligible for the first time since 2012. There are much bigger goals out there, though.

''That will be something at the end of the season we can look back at and say, Did we reach our full potential?'' Campbell said. ''If you really want to be a good football team, all you can worry about is what you do. As soon as you start buying into everything else that everybody wants to say nice about you, bad things happen.''

Nice things are being said, to be sure. But the tangible results on the field have been more than enough to make the Cyclones feel good about themselves heading into the TCU game.

''Pretty confident. I mean, there's no reason not to be,'' Lanning said after Saturday's game in Lubbock, Texas. ''We've got to move on from this. We can celebrate today. Tomorrow we've got to come back to work, fix some mistakes. Next week's a big week for us. It's not going to be easy. Every week is a tough week in the Big 12.''