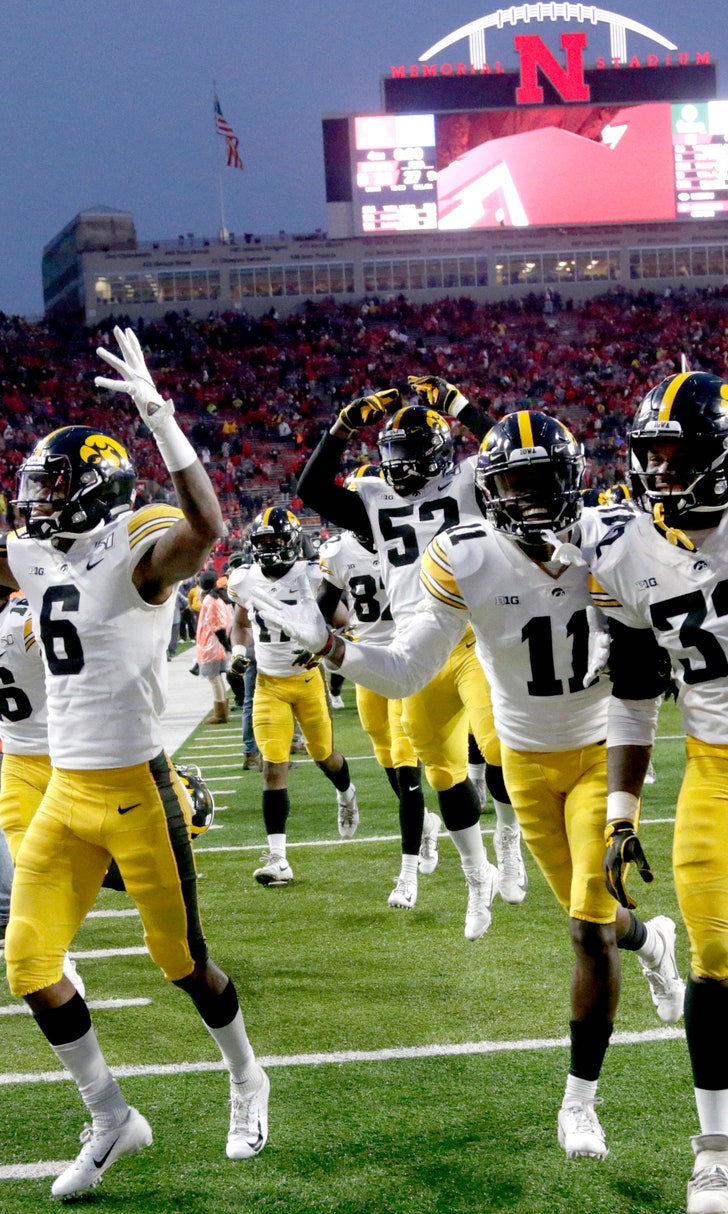 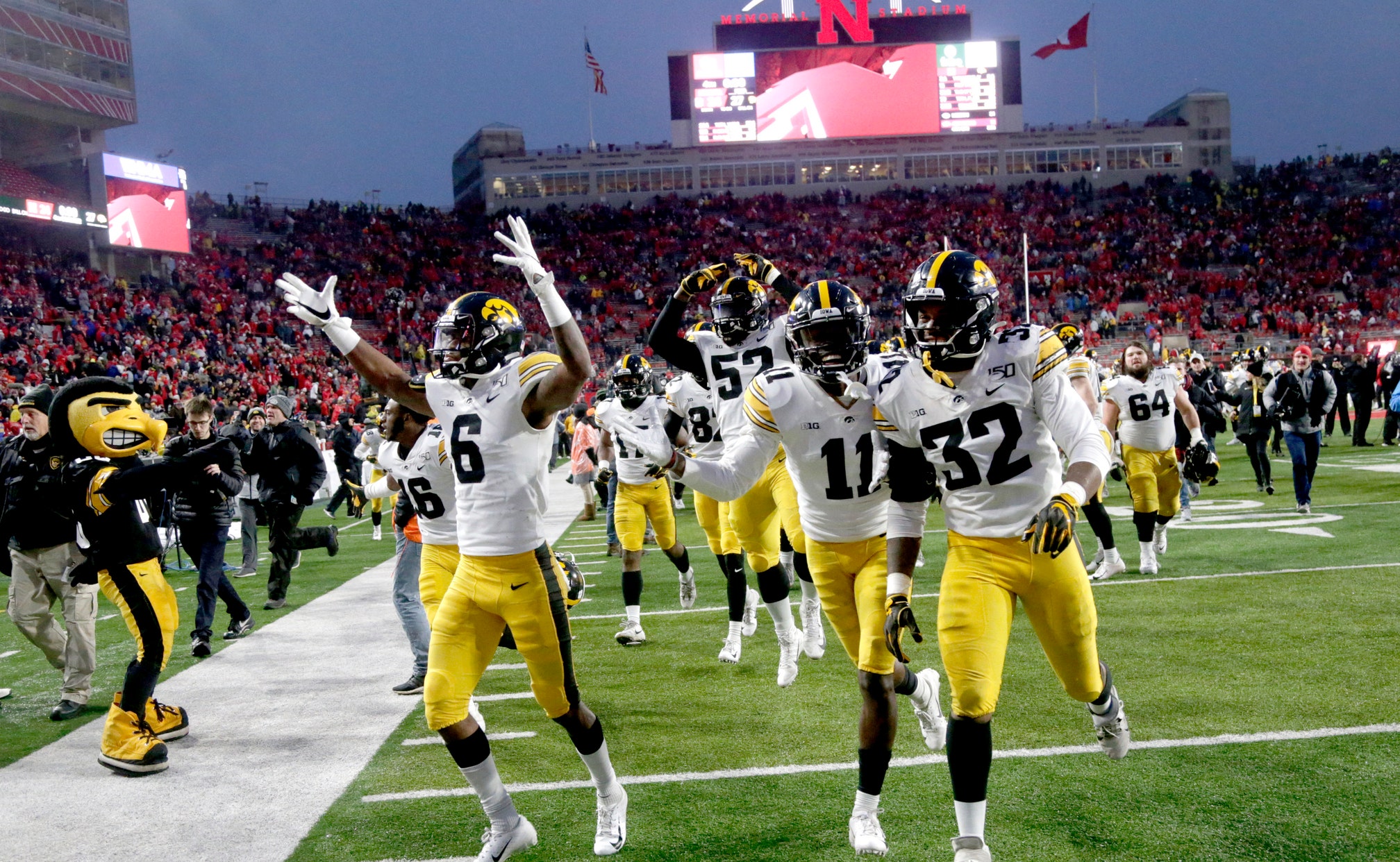 LINCOLN, Neb. (AP) — It was cold and damp, Iowa had the ball at its 26 with 32 seconds left in regulation in a tie game, and the Hawkeyes’ offense hadn’t done much since the first quarter.

Instead of being content to play for overtime against border rival Nebraska, coach Kirk Ferentz went for the win Friday.

The Hawkeyes got it when Keith Duncan kicked a 48-yard field goal with one second left, giving No. 19 Iowa a 27-24 victory over Nebraska that leaves the Cornhuskers out of the postseason for a third consecutive season.

“We thought we had a chance if we executed,” Ferentz said. “There’s some risk and reward involved there. We thought the reward outweighed the risk. At least we came out the right side this time.”

Duncan, who walked on to Iowa in 2016, had more to celebrate than just helping the Hawkeyes hold onto the Heroes Game trophy for at least another year. Ferentz announced after the game that he was giving Duncan a scholarship.

“The culmination of all these four years of hard work,” said Duncan, who also kicked a 49-yarder against the Huskers and now owns the Big Ten single-season record with 29. “These 12 weeks have been really hard for us, just working 100%. There’s been some setbacks, but we finished here. Team goals will lead to individual goals, and that’s where we are today.”

Iowa, which had its 14-point lead wiped out in the third quarter, got the ball back after forcing a Nebraska punt in the final minute. Nate Stanley had a long pass to Nico Ragaini overturned to incomplete on video review, but then completed a pair of 22-yard passes to Ihmir Smith-Marsette and Sam LaPorta to bring on the reliable Duncan.

The Huskers called two timeouts before Duncan drilled the winner down the middle and with plenty of distance.

“Every field goal I’m hungry for, especially in a situation like that with tough conditions,” Duncan said. “That’s why you become a kicker. You’ve got to be hungry and not scared.”

After the ball went through, holder Colten Rastetter and Duncan ran toward the Nebraska sideline. Rastetter pointed at the Huskers while Duncan blew kisses at them.

Nebraska, down 24-10 at half, tied it with back-to-back touchdowns in the third quarter. Luke McCaffrey entered the game for a play in place of quarterback Adrian Martinez, rolled to his left and hit JD Spielman with a perfect 39-yard TD pass. The Huskers ran on 12 of 13 plays while covering 60 yards on their next drive, converting a fourth-and-6 before Wyatt Mazour ran in from 9 yards.

Smith-Marsette scored on a 45-yard on a reverse run and ran back a kickoff 95 yards for a touchdown and Tyler Goodson broke a 55-yard TD run as Iowa got out to its lead in the first half.

Stanley completed 11 of 24 passes for 99 yards, his lowest total since throwing for 86 against Maryland last year. Tyler Goodson ran 13 times for a season-high 116 yards.

The Huskers are in their longest bowl drought since 1955-61, but coach Scott Frost is encouraged by the progress the second half of the season.

“There’s a lot of things that needed to get fixed, and I think a lot of those have been addressed,” Frost said. “I think when you plant a seed, you don’t necessarily see sprouts right away. There’s a lot going on underneath the ground before you see things shooting out of it. I know a lot of things have gotten better.”

“You always love to win this game,” Epenesa said. “They joined the Big Ten not too long ago but it’s turned into a pretty hard-headed rivalry between the two of us. If it’s between whose corn is better, which team you like more or what state you’re from, there’s a lot of pride on both sides of this. When you can come out and win it, especially in other people’s stadium, it adds a little extra to it.”

Iowa: This was a hard-fought win for the Hawkeyes and one they’ll savor because it came against their border rival. Except for the big-play touchdowns, their offense continued to be middling.

Nebraska: The Huskers dropped to 0-6 against Top 25 opponents over two seasons under Frost.

Iowa will stay in the Top 25 thanks to Duncan’s late field goal.